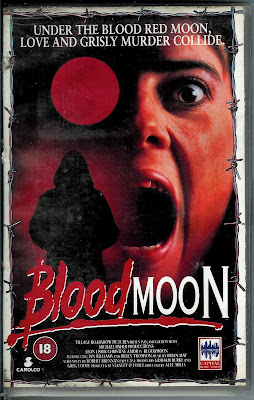 “Under a blood red moon, love and grisly murder collide at a private girls’ school when a maniacal killer transforms their world into a living nightmare. When two youngsters in love disappear, nobody worries. When more young couples meet in the woods, truth becomes clear – a campus murderer is lurking, someone who hates love – someone strangling passionate semi-clothed lovers with a barbed wire noose, and then burying them.”

Ok, so I bought this mistaking it for Jess Franco’s slasher flick “Bloody Moon”. Yes, that’s right - I don’t like slasher films and I’m ambivalent about Jess Franco, but I bought "Blood Moon" anyway on that basis and was somehow disappointed when I discovered it was actually a different film entirely, and… god, someone help me please.

Anyway, by the time I was halfway through trying to watch this thing, I’d have weeped tears of joy if footage from even the shoddiest of Franco’s works could have intervened to save me from the asinine tedium of “Blood Moon”.

How did it come to this, Alec Mills? Blood is good. Moon is good. Blood Moon? Even better! You got a guy in a hood on the front (HE HATES LOVE). You got a girls boarding school. Maybe it could be a bit like the one in "Lust For A Vampire"...?

What sort of effort does it take to scoop up those elements and make a film this crushingly dull?

A thoroughly tepid Australian production gormlessly trying to cash in on the last fading glories of the ‘80s slasher boom, “Blood Moon” is like watching a feature length episode of “Home & Away” where everybody’s on anti-depressants, with occasional bloodless strangulation. Only that sounds kinda diverting, this isn’t.

Music by Brian May, who I’m sure would love to be reminded of his work on this one, is, well…. wank, I think, is the word I'm looking for.

I think the people who made this movie hate love.

BEST DIALOGUE: I find it hard to recall any of the people who were even in this film, let alone what they said.

That would be Brian May the Australian composer, who is not the same as the curly-haired Queen guitarist. Not that the latter has much to be proud of these days, either.

Oh, right. Yes, that would seem to make sense - thanks for the clarification!