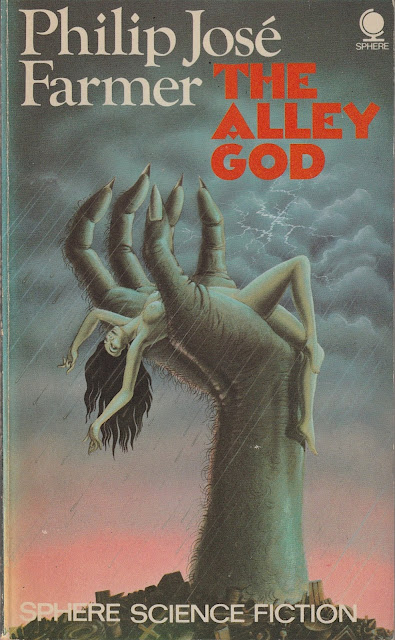 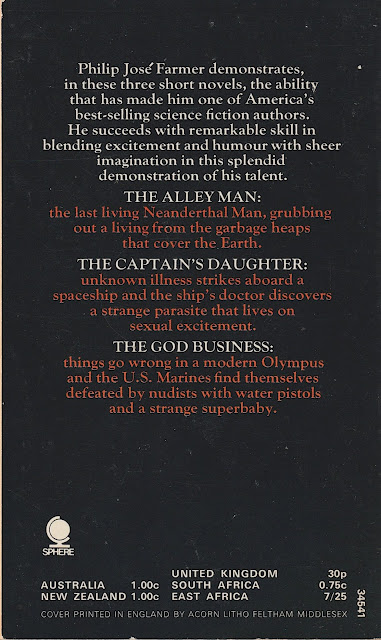 More so perhaps than any other classic-era science fiction author, Philip José Farmer’s work seems to have inspired a wealth of extraordinary and unusual paperback cover art across the decades, with this strikingly horror-ish joint from Sphere providing a case in point. [Previous posts featuring mind-bending examples of artwork used on Farmer’s books can be found here, here and here.]

In fact, as a direct result of the hellzapoppin’ imagery publishers seem to have used to sell his wares, I actually own no less than six Farmer books, but until recently had never read a word of any of them. Indeed, having never knowingly gone out of my way to learn anything about him, the sum total of my knowledge comprised the following:

1. He annoyed Kurt Vonnegut by writing ‘Venus on the Half-Shell’, an unauthorised collection of ersatz Kilgore Trout stories, which, in Vonnegut’s view, got it all wrong and were basically a load of shite (I paraphrase, you understand).

2. He wrote those ‘Riverworld’ books, in which a load of historical and fictional characters intermingle aboard a phantasmagorical riverboat and – as I recall some guy once telling me in A level college – have uproarious sex with each other.

3. His earlier SF work seems in fact to have been chiefly defined by his insistence upon adding SEX to proceedings – a development which, at the time, was considered about as welcome as, say, adding giant lobsters to a drawing room murder mystery.

So, yes – bawdy eroticism, intertextual post-modernism and annoying people. That seems to have been Philip José Farmer’s bag, but it’s high time I found out for myself, I reasoned, and the three early ‘50s novellas which make up ‘The Alley God’ seemed like a pretty good (by which I mean, entirely random, and short) place to start.

The first of the three, ‘The Alley Man’ (1959), appears to involve the discovery of a sole surviving Neanderthal man living in some rural American backwater. It actually won a Hugo award for Best Short Story in 1960, but…. flicking through this story’s pages, it seems to be written almost entirely in exaggerated/comedic hayseed argot (sample line: “Hey, li’l chick, you din’t know Old Man knew them big words like contamination, didja? Hor, Hor, Hor!”), so, I’m sorry, but – no. Maybe I’ll return to it if I really enjoy the other two stories, I reasoned, but no way am I starting off with fifty-three pages of that.

The second novella, ‘The Captain’s Daughter’ (originally published as ‘Strange Compulsion’ in 1953) concerns a doctor posted to a lunar colony who finds himself attempting to treat a mysterious illness afflicting the teenage daughter of a moody star-ship captain, and discovering she has become victim to a new kind of parasite, which latches onto the human nervous system and feeds off sexual energy. Naturally this concept isn’t explored in the kind of graphic, Cronenberg-esque fashion a modern reader might expect, but I daresay it must have still been pretty provocative stuff for an early ‘50s SF audience, especially as the story’s climactic image of father and daughter momentarily locked in some kind of sweaty, inhuman embrace merrily tramples across the boundaries of conventional good taste.

Overall, it wasn’t a bad little skiffy yarn, and included a few nice bits of hastily sketched in ‘world building’, such as the addition of a disgruntled lunar detective, discussion of different planetary colonies on which the gender balance has somehow been catastrophically knocked off balance, and some background concerning a colony on a remote planet established by a non-conformist religious sect (to which the captain and his daughter belong), like some kind of interstellar Jonestown.

Unfortuantely though, it also felt far too long, stretching a simple idea which might have worked well for a ten-page short story out of novella length, and is also marred by some questionable, ‘50s sit-com style humour and horrendously dated gender politics. Both of these traits are exemplified by the character of the nurse who assists our protagonist - a ‘ditzy’ walking stereotype whose every line of dialogue concerns her desperate need to find a husband, wishing aloud that her next patient may be a virile male who’ll take her up in his arms, and wondering why the hunky doctor refuses to fall for her charms etc etc. You get the picture I’m sure, and it’s a pretty tedious one.

These flaws are carried over wholesale into what is undoubtedly the most interesting of the three stories included here, ‘The God Business’ (1954), a frankly bizarre concoction of aberrant notions which plays in part like a sensualist / absurdist precursor to Boris & Arkady Strugatsky’s Russian SF classic, ‘The Roadside Picnic’ (1972), and in part like the weirdest reimagining of a ‘Heart of Darkness’-style journey narrative I’ve ever encountered.

A challenging tale to try to summarise to say the least, the idea behind this novella essentially concerns an Illinois college professor named Bill Durham known for his unhealthy fixation with the Olympian Gods. Using powers left unspecified in the text, he seems to have turned a souvenir beer bottle bearing the image of a bull into a magical fountain, spewing some kind of potent elixir known only as ‘the brew’, with which he proceeds to spike his town’s water supply, transforming the local populace into naked, uninhibited revellers, untroubled by the usual human weaknesses of pain, hunger, aging etc.

Reigning over his subjects in the guise of a bull-god named ‘Mahrud’, Durham turns the area surrounding the town into into a kind of anarchic and constantly mutating ‘forbidden zone’, ruled over by his assigned demi-gods, who also take on cartoon-ish, animal identities, and using brew-filled water pistols to rout the platoon of U.S. Marines who are naturally dispatched to contain this unwarranted outbreak of craziness.

Into this mess steps our hero, Daniel Temper, a former student of Durham, who is afflicted by crippling self-esteem issues as a result of his bald head, stammering and false teeth. Accompanied by a stern yet beautiful young female army Major (?!), Temper is sent to infiltrate Durham’s ‘zone’. He and his companion travel naked, carrying nothing but a heavy canister of purified water, their assigned mission being to kill Durham and locate and neutralise the source of his miraculous ‘brew’.

Frankly, this is all just as weird as it sounds, rendered all the more so by Farmer’s insistence upon loading the thing with rib-tickling bad jokes and low level misogyny, and on trying to present Temper’s episodic encounters with assorted oddball characters as some kind of grand, all-encompassing allegory which I didn’t really understand even after Durham – when he finally makes his Kurtz-like appearance – had spent several entire pages painstakingly explaining it all.

Overall, I really wasn’t sure what to make of all this really, but I certainly appreciated the almost Jodorowsky-esque head-spinning surrealism of the whole affair, and there was a certain fascination which kept me reading, despite the unctuous, all-over-the-map tone of Farmer’s writing.

In fact, reading these two novellas, my ill-informed preconceptions about Farmer seem to have been entirely borne out. Both of these stories go out of their way to poke fun at uptight, 1950s attitudes to human sexuality, instead positing a kind of earthy, let-it-all-hang-out openness to the subject. ‘The God Business’ at least is also loaded with eye-watering literary puns and complex references to everything from Greco-Roman mythology to newspaper cartoon strips, and the overall authorial persona which emerges from these works is indeed pretty annoying, in a way I can’t quite put my finger on.

I’d be tempted to conclude that these feel like stories written by someone’s creepy, loud-mouthed uncle, but…. when we reach a certain age, aren’t we all essentially someone’s creepy uncle (or aunt)? It would seem harsh to dismiss Farmer simply on that basis, and heaven knows, these stories certainly proved sufficiently peculiar to merit my adding a few more volumes bearing his name to my ‘to read’ pile, in order to see how things panned out later in his career.