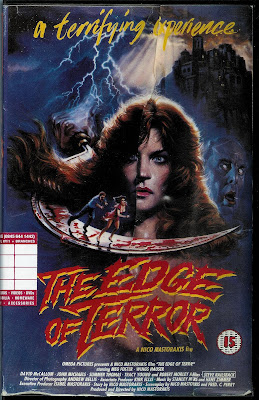 THE BOX SAYS:
“It comes at night. It’s a merciless, vicious killer. It can be your enemy or it can be your friend.”

Huh? It can do what now? What’s ‘It’ anyway? Where am I? As usual, sounds like an intern was just slinging this shit together using some magnetic poetry kit of video box copy clichés.

The Greek director Nico Mastorakis seems to have operated as something of a one-man film production powerhouse from the ‘70s through to the ‘90s, knocking out a steady stream of independently-financed exploitation flicks ranging from the notorious sickie “Island of Death” in ’75 through to brainless fare like “The Zero Boys” and “Ninja Academy” in the late ‘80s. Given that his mighty efforts seem to have been rewarded with an almost total lack of commercial success, critical recognition or cult following that persists to this day, I can only assume Mr. Mastorakis was one determined dude. Apparently his last film as writer/director/producer was something called “.com for Murder” in 2002, which… sounds like as good a place as any for him to admit defeat and move into property management or whatever the hell he does now.

Approaching a 15-rated ‘atmospheric suspense thriller’ lensed by a guy best known (in so far as he’s known at all) for sex/violence shock tactics and utter trash (this VHS dates from the bad old days when the BBFC used to slap an ‘18’ on anything that even LOOKED like it might be a horror movie), the only edge I was expecting “Edge of Terror” to take me to was the queasy precipice between boredom and ridicule, but you know what? I’m going to drop the sneery tone right there, because “Edge of Terror” is actually pretty good.

I mean, it’s certainly not a GREAT film by any means, probably not one I’d encourage you go out of your way to track down unless you have some particular interest in it, but if you happen to find a cheap copy knocking around somewhere, go for it - you could do a lot worse. Essentially Mastorakis’ attempt at a legitimate murder/suspense film in the ‘Cape Fear’-via-Hitchcock mould, “Edge of Terror” is a well made, thoroughly watchable and not-entirely-stupid piece of work that didn’t have me checking my watch once through its 100 minute run time.

Aside from anything else, it certainly gets a thumbs up for the economy of its plotting. American thriller writer Sean, played by Meg Foster (she of the weird, iridescent eyes and fiery red hair), has rented a remote house in a near deserted Greek village in order to get some peace and quiet to finish off her new book. Unfortunately though, her landlord (an eccentric old duffer played with relish by veteran character actor Robert Morley) is promptly murdered by psychotic handyman Phil (Wings Hauser, he of the post-Jack Nicholson fevered grin, lurching nervous mannerisms and personal grooming that befits a guy named Wings Hauser). As the only witness to said crime, Sean is naturally in the hot seat for the next round of slaying, and the rest of the film essentially consists of a life and death struggle as she and Phil stalk each other around their isolated clifftop locale.

Refreshingly for a movie that could easily have degenerated into a dreary slasher, the focus stays firmly on the fight between the two characters, and they’re a lot more evenly matched than the legacy of a thousand faintly misogynistic Euro stalk n’ slash movies would lead one to expect. Meg turns out to be convincingly bad-ass heroine, keeping a cool head when pursued by a murderous loon with a sickle, going into full-on “resourceful” mode and ditching her high fashion duds in favour of a more practical boilersuit… y’know, just like a sensible, real-life woman probably would. And Wings, for his part, portrays a fairly goofy, amateur psychopath, staggering about in a confused rage and looking pretty taken aback by the fact he’s got an actual opponent to deal with rather than a screaming bimbo to terrorise. So: smart woman with a butcher’s knife vs. staggering weirdo man with a sickle? You’ve gotta like those odds.

In what I assume to be an unusual move for a low budget ‘80s movie, “Edge of Terror” is filmed in old fashioned Technicolor, and Director of Photography Andreas Bellis deserves credit for some splendid and imaginative cinematography – even on this battered, 20+ year old tape, the movie looks superb. In fact, aside from the odd detail of fashion or dialogue, the opening sequences here could easily be mistaken for one of those lavish Italian movies from the ‘70s where a load of fashionable ladies flounce around some luxurious coastal resort getting up to no good and murdering each other and what-not. At times “Edge of Terror” put me in mind of Bava’s “Bay of Blood”/“Twitch of the Death Nerve”, if admittedly with a smaller cast and minus the gratuitous carnage.

Mastorakis’s direction is sometimes a little artless, and subject to rather overcooked ‘stylistic flourishes’ (slow motion, Ridley Scott style back-lighting etc), but in general it’s pretty solid, squeezing a great deal of atmosphere out of the Greek locations, whilst his tight editing keeps things moving along at a cracking pace. The closing daybreak/final struggle sequence is particularly noteworthy, bringing an unexpected dose of disorientating otherworldliness to the film’s conclusion, recalling the eerie intensity of classic low budget ‘70s Euro-horrors like DeOssario’s “Tombs of the Blind Dead” or Rollin’s “Grapes of Death”.

The script (also by Mastorakis) lets the side down slightly, with some clunking mouthfuls of unlikely dialogue, which… ok, actually I always enjoy those, but more crucially, some poor writing later in the film that come dangerously close to ruining the good feeling the rest of the movie has built up. As noted, both Foster and Hauser work hard to establish their respective characters on a level that goes beyond mere assemblages of cliché, but increasingly in the final half hour the script begins to undermine their efforts, as Meg’s previously down to earth character suddenly starts doing incredibly stupid things, and Hauser’s shambling nutter seems to find himself imbued with Michael Myers-like supernatural cunning.

Case in point is the sequence in which Sean suddenly remembers that the landlord told her his son’s hunting gear was kept in a locked cupboard in the house; kicking it open, she suddenly finds herself with a high-powered hunting rifle! Aha! A real game-changer in a struggle-for-survival movie like this, needless to say. Emptying a box of ammo, she declares that there are 4 LIVE ROUNDS left, and we see a close up of her loading them one by one.

Now a scene like this, and a specific piece of information like that, creates certain expectations for an attentive audience – namely, that the use of those four rounds is going to prove pretty pivotal to the narrative, and is going to be drawn out for maximum tension and excitement. Not so here though, as Sean simply kicks open the upstairs window and starts randomly blasting away at the general area where Wings is patrolling around looking for her, shrugging when the ammo runs out and going back to her knife. I mean, why the hell was that scene even in the movie? Pure amateur hour stuff whichever way you look at it, and very much detrimental to the enjoyment of the film’s ‘one-on-one battle of wits’ aspect, needless to say.

And that’s a good summation of “Edge of Terror”s shortcomings really. Whilst Masterakis succeeds admirably in his presumed goal of making a good, comparatively serious film without falling back on tits and gore, his occasional lapses into silliness render it not quite good enough to have really grabbed anyone’s attention on release (especially when Robert Harmon’s similarly-plotted “The Hitcher” was kicking twenty kinds of ass in cinemas the same year). And whilst it is objectively speaking probably a better film than a lot of the oddities unearthed by DVD labels like Code:Red and Shameless, the lack of any big names or Unique Selling Point, the dull-sounding plot-line and the absence of aforementioned tits and gore - above all, the lack of any honest to god WEIRDNESS – all this sadly points toward the film’s continued obscurity in the eyes of modern day cult film fans.

Ah well. You gave it your best shot Nico, and no one can take that away from you. You made a pretty good movie, and that’s more than most of us can say.

“Your problem Sean is, you think I’m one of those super-studs from your novels, but I’m not. I’m a real, forty-two year old, overweight guy, and once in a night is enough after a hard day in the mine.”

David McCallum, playing Sean’s boyfriend in the film’s LA prologue, manages to deliver this speech with such sincerity, I immediately started thinking “boy, he’s got a pretty swanky pad for a miner”. Then before I could finish that thought, they opened the skylight and saw the Goodyear blimp! The actual Goodyear blimp! I loved that whole sequence, actually.

Unbelievable. I bought a poster of the Mastorakis classic 'dot com for Murder' for my friend who is something of a film fan. Roger Daltrey and Huey Lewis - together at last. He still hasn't thanked me. Brilliant reviews, great site.

Thanks for all your comments - much appreciated!

I just looked up '.com for Murder' on IMDB, and my god, does it ever look like an exquisite feast of awful. What was Natassja Kinski thinking? What was anyone thinking? I mean, Roger Daltrey doesn't even have the excuse of needing to pay the rent. Glorious.