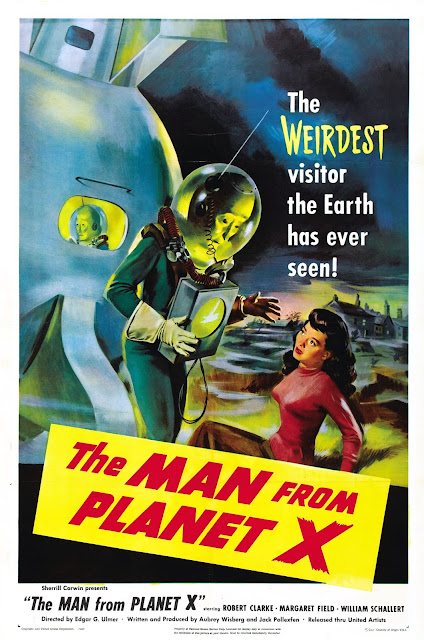 Long on atmosphere but short on story, this weirdly compelling poverty row oddity from B-movie auteur Edgar G. Ulmer remains historically noteworthy as one of the very earliest entries in what would soon become a veritable avalanche of horror-inclined science fiction movies throughout the 1950s.

Though the writing here is sketchy in the extreme – never really bothering to take its ideas beyond the kiddie matinee level – ‘The Man From Planet X’ can nonetheless make a good case for itself as the very first ‘alien visitor to earth’ movie to emerge from Hollywood, quietly prefiguring [or at least, produced in parallel with] the familiar defining classics of the genre – which must have made it’s tale of a lone representative of a dying alien race pitching up on a remote Scottish island and using the mind-controlled locals to help it prepare for a full scale colonisation project feel at least somewhat sensational to its initial audiences.*

Of course, these kind of stories had been knocking around in literary SF for decades by this point, but such subject matter was still a novelty when it came to the movies, to the extent that Ulmer and writer/producer Jack Pollexfen (how could he not make SF movies with a name like that?) seem unsure how to handle it.

Essentially, they seem to have decided to tackle the material in the style of a 1940s horror movie, imbuing their extra-terrestrial visitor with a genuine sense of uncanniness and mystery that would swiftly vanish from the more scientifically-minded movies that followed later in the decade, and it is this approach, rather than any claims of alleged historical importance, that continue to make ‘The Man From Planet X’ worth seeking out all these years down the line.

Filmed at least partially on sets left over from the Ingrid Bergman version of ‘Joan of Arc’ (1948), and enhanced by some absolutely beautiful miniatures and matte paintings (reportedly created by Ulmer himself), the film’s fictional Scottish island – upon which a crumbling medieval ‘broc’ (repurposed as an observatory) stands out starkly on a craggy outcrop surrounded by boulder-strewn wilderness - is a baleful, fog-shrouded studio creation that rivals anything Mario Bava achieved on similarly low budgets in later decades.

Though some atrociously shoddy theatrical backdrops used here and there, and you’ll sure get sick of looking at those same few rocks used in close-ups by the end of the picture, the sheer isolation of the island setting is nonetheless powerfully conveyed (in this regard, ‘The Man From Planet X’ reminded me strongly of far later UK-based monster movies such as ‘Island of Terror’ (’66) and ‘Night of the Big Heat’ (’67), and the overall atmosphere created here is rich, consistent and deliciously weird – a fine, classic draught for connoisseurs of studio-bound cinematic gothic.

This is just as well, as the film’s writing, as mentioned above, is less than top drawer. The human drama – as represented by the potential love triangle between square-jawed hero Robert Clarke, demure scientist’s daughter Margaret Field and cowardly creep William Schallert (he has a little black beard, so watch out) - is pure boilerplate stuff, just treading water until the scary stuff shows up, in a formula already familiar to poverty row horror films that would unfortunately go on to be replicated in hundreds of monster movies over the next few decades.

Much time meanwhile is similarly ill-spent on expounding reams of ‘science stuff’ that is unlikely to have convinced even the most credulous 1950s school boy, concerning as it does the path of the alien’s blighted home planet, which his race have seemingly sent careering through space, putting it on course to pass extremely close to the earth in, ooh, a couple o’ days.

The island on which the film takes place has been picked – both for the observatory and the alien scout’s initial landing – on the basis that it will be the point on the earth’s surface that will come closest to the passing Planet X, thus making it the perfect spot for the alien invasion force to do a quick hop from one globe to the other. So I mean, we’re not quite working on an Arthur C. Clarke level here, y’know?

Even the film’s great, flash-forward opening – in which we see Clarke alone in the darkened observatory, scribbling his story by candle-light before he steps out to face the alien menace that has overcome his companions - turns out to be a cheat, as, when we eventually reach that point in the main narrative, it turns out that he has a whole regiment of police and soldiers from the mainland waiting outside to back him up, whilst his friends are merely temporarily indisposed by the alien’s mind control beam.

If you’ll allow me a quick -- SPOILER ALERT – moment, I should also outline the nature of our hero’s plan for overcoming the alien threat in the nick of time before Planet X reaches the Earth. Basically, Clarke advocates approaching the mind-controlled humans who are serving the alien and, just, y’know, talking to them and shaking them about a bit until they snap out of it. Then, he’ll lead them all to safety, the soldiers will blow up the alien’s ship with a fizzy sparkler rocket launcher, and bob’s yr uncle – invasion averted! Yes ladies and gentlemen, he apparently brooded all night trying to come up with that plan. I ask you.

But anyway, leaving these script deficiencies aside, we should probably also spend some time discussing the alien itself. Though the sight of a diminutive spaceman waddling about in a big domed helmet with grabby extendable arms and a ray gun would soon became the very essence of cheesy sci-fi cliché, the creature here – apparently played by a performer whose specialty was a “slow motion vaudeville act” - is really quite striking.

There is something genuinely odd, and, well… alien… about this alien, and the complete failure of the human characters’ attempts to communicate with it feels like a far more believable portrayal of the frustrations of two entirely different life forms trying to suss out each other’s intentions than the convenient “we learned your language from your TV broadcasts, earthling” kind of shtick that would become common currency in subsequent SF films.

Although he is ostensibly an aggressor, the travails of this poor little fella, traipsing around a distinctly unwelcoming landscape, with big, maniacal apes forever threatening to shut off his all-important breathing apparatus if he doesn’t co-operate with their incomprehensible desires, are actually quite affecting in a weird sort of way.

When he resorts to the mind control beam to recruit some local help and shuts himself up tight in his landing craft, we have to ask ourselves if a human astronaut would have done any different in equivalent circumstances. As such, ‘The Man From Planet X’ achieves a sense of parity between the two race’s respective encounters with the ‘alien’ that, again, would rarely be matched by the more polarised, Cold War-inclined sci-fi that followed.

As with all of the Ulmer movies I’m familiar with, ‘The Man From Planet X’ has a certain aura of darkness about it that prevents it from ever being written off as campy or unintentionally humourous, despite its clumsy scripting and rudimentary special effects. As in the director’s other films, there is a sense of dislocation and confusion that predominates here above all else, as the characters find themselves lost in a situation beyond their understanding or control, their free will seeping away as inexplicable events shift the terrain around them, and as even their own individual motivations become increasingly unclear.

In this sense, ‘The Man From Planet X’ seems more reflective of the war-haunted fears of the 1930s and 40s than of the heavy-handed Cold War sub-texts that would soon come to dominate the SF genre as it developed, and it remains all the more memorable and mysterious as a result - a small, cheap and knowingly silly movie that nonetheless orbits a core of the genuinely uncanny, and the genuinely fearful, keeping full understanding and resolution forever just out of reach.

* To clarify, ‘The Man From Planet X’ actually premiered in March 1951, one month before Howard Hawks/Christian Nyby’s ‘The Thing From Another World’, with which it shares a number of story elements. The more immediately influential ‘The Day The Earth Stood Still’ followed in December, and after that, ‘50s sci-fi was officially off to the races.