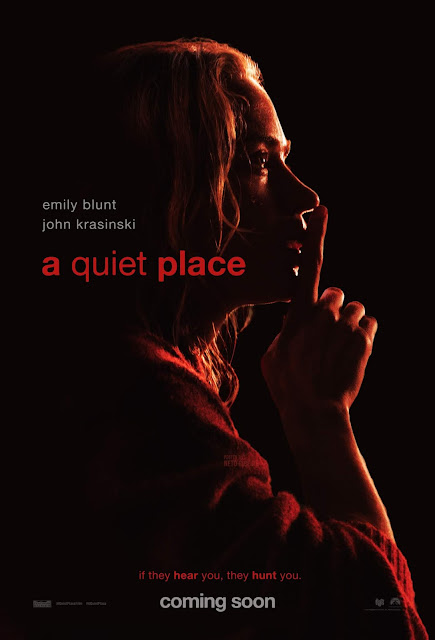 Welcome to the High Concept Zone, where we find a very 21st century iteration of the ideal American nuclear family living in a state of total silence, in an eerily depopulated version of rural upstate New York.

They are isolated survivors, adjusting as best as they can to circumstances in which the slightest sound brings instant death, courtesy of the huge, apparently unstoppable, alien predators with over-sized hearing apparatus covering most of their heads who lurk just out of sight, waiting to pounce on any outburst of noise with lightning speed.

The extent and immediacy of this threat is made clear to us in no uncertain terms during the film’s opening sequence, when, as the family tip-toe back to their bucolic farmstead following a scavenging expedition to the nearest town (they wear no shoes, and have tramped down their route with sand), the youngest of their three children covertly inserts some batteries into a toy space shuttle he has acquired without his parents’ knowledge. The results are not pretty.

Jumping forward a year or so from this tragedy, the other members of our family remain alive and well, and we learn that they have in fact been granted a significant boon in the survival stakes via the fact that their eldest daughter is deaf. This means that they were already fluent in communicating via sign language (which is helpfully sub-titled for us) before the alien invasion hit, and were to some extent already used to sharing her soundless world.

As the might well imagine, this is a film clearly designed with theatrical exhibition in mind. It was definitely not intended for viewing at home, particularly when your next door neighbours are having a house party, or your pets are making a fuss, or whatever else. The first ten minutes or so of the film play out in total silence, and the sounds we hear thereafter are strictly limited to those the characters hear – each one a potential harbinger of death. IMDB trivia informs me that the first line of spoken dialogue (whispered, naturally) occurs 38 minutes in.

It’s a bold move for a commercial feature, but, after briefly wondering whether I could really make it through ninety plus minutes of this whilst sitting, subject to distractions, in a friend’s living room, I was surprised by how easily I adjusted to the film’s world of silence. (The fact that traditional, non-diegetic music gradually begins to creep in as action intensifies later in the film probably helps in this respect.)

One thing we should make clear straight away is that, to get anything out of ‘A Quiet Place’, one must Indulge The Concept. Spend a few minutes testing its real-world foundations, and it clearly don’t hold up too good. How long can a human being really go without coughing or sneezing or snoring..? How do the family intend to silently harvest and process the golden fields of corn they’ve apparently raised on their farmstead..? The father (played by director Krasinski and his fulsomely moisturised beard) may be a DIY homesteader/inventor par excellence, but surely even he must have trouble sawing wood and hammering nails in silence..? And so on.

We could continue in that vein for quite a while, but what would be the point? Far better just to accept Krasinski (and co-writers Bryan Woods and Scott Beck)’s idea as an ingenious, Twilight Zone-style thought-provoker – exactly the kind of thing that Richard Matheson or Charles Beaumont might have come up with back in the day, invested with a wistful American specificity worthy of Ray Bradbury - and to see where they want to go with it, basically.

Thematically speaking, I fear their eventual destination is nowhere too remarkable. Aside from a strong emphasis on the virtues of familial love and cooperation (the fact that Krasinski stars opposite his real life partner Emily Blunt probably helped in this regard), and an earnest survival-above-all-else message common to most high-minded disaster/post-apocalypse tales, I suspect there is little that can be pulled out of ‘A Quiet Place’ to beef up anyone’s thesis on the socio-political aesthetics of the contemporary U.S. horror film.

As a straight-forward narrative entertainment however, it is at least extremely well-realised. Assembled with a spirit of hand-crafted professionalism that oddly mirrors the practical achievements of its male protagonist, ‘A Quiet Place’ makes effective use of its reasonably glossy production values (the dread name of Michael Bay appears alongside a bus-load of other credited producers, and there are more people listed in the credits than in probably every pre-2000 film I’ve reviewed this October put together).

Editing rhythms and real-world cause-and-effect remain as tight as the premise demands, and, throughout the film, suspense is tightened, released and re-tightened with confident ease. The keep-quiet-or-die conceit gives the filmmakers the opportunity to explore some novel variations on the well-worn methodology of nail-biting tension, including, as you’d imagine, many hands thrust across mouths at the last second, and a whole bit of business with a loose nail sticking out of the basement staircase that is just delightful.

Spectacle and peril are both kept on a tight leash through a long and convincing slow-burn, only to be let loose in the final act, when certain incidents-which-we-shall-not-spoil-here have made clear that all bets are off. As is only right and proper, the film’s big-eared monsters are initially kept at a distance – gigantic, toothy blurs that crash across the screen, leaving destruction in their wake. When we do get to see a little more of them however (and eventually, we see quite a lot of them), they are very cool and impressive creations.

Next gen descendants of the questionable critters who once galumphed across our screens in Verhoeven’s ‘Starship Troopers’ and clear ‘Quiet Place’-precursor ‘Pitch Black’ (2000, with Vin Diesel - remember that one?), they seem to reflect a positive development I’ve noted in a number of films in recent years, vis-à-vis the creation of CGI monsters that convey convincing weight and physical presence, and, as a result, do not look laughably ridiculous when placed within ‘real’ filmed environments.

The design of theses beasties’ heads in particular – with multiple, overlapping jaws opening like the petals of a flower to reveal some kind of vast, fleshy hearing apparatus – is memorably horrific, hitting some of the same ‘uncanny’ buttons as the original, similarly eyeless, ‘Alien’ blue-print.

One of the most interesting twists in the film’s storyline comes via the fact that Blunt’s character is pregnant. Just think about that for a moment. I mean, you can teach your older children to keep quiet, but how are you going to tell the new arrival..? The thought that holding a new born baby is essentially the equivalent of lighting a stick of dynamite is an unpleasant fact that the human race within this film is basically going to have to find a way around, should they wish to survive.

I’m not sure I find Mr Can Do Dad’s solution – which involves a padded, sound-proofed wooden box with pumped in oxygen – entirely convincing (and the notion of an infant who spends his or her early years confined to a series of increasingly large boxes sounds like material for an entirely different kind of horror film), but… I certainly couldn’t come up with any better ideas, and imagining how the forthcoming birth was going to play out proved a fascinating and rather terrifying prospect.

Unfortunately, it is at this point that I felt ‘A Quiet Place’ dropped the ball somewhat. Somewhere along the line, the more familiar mechanics of modern, commercial horror movies start to come into play, precipitating a gruelling stalk-and-hide sequence which culminates in a landmark “you’ve got to be f-ing kidding me” moment that feels so ludicrous that I hope readers who have seen the film will know what I mean when I say that it comes very close to torpedoing our ability to take the remainder of the movie seriously.

Furthermore, to jump on what seems to have become a personal hobby-horse of mine, I do wish that modern filmmakers could ditch their habit of using child birth and new born infants merely to ‘up the ante’ on horror and suspense set-pieces. Of course, issues of parenthood and reproduction are always ripe for exploration, and of course the ‘child/mother in peril’ trope is as old as time itself, but, now that the unspoken taboo re: placing maternity ward business in close proximity to grisly violence and imminent death seems to have been broken, the way in which this freedom is increasingly exploited (in this film, The Void, and The Witch, to name but three films I’ve reviewed here) often strikes me as merely crass and manipulative. (Admittedly, this could just be because it succeeds in manipulating me so well, but…)

And, whilst I’m getting my licks in, I also need to pre-warn viewers of the regrettable (and unexplained) deus ex machina which occurs toward the end of ‘A Quiet Place’. Just think the movie version of ‘Day of The Triffids’, and we’ll say no more about it. Not that I have any better ideas on how to end the thing I hasten to add, but, as with the pregnancy thing, the suspicion that the scriptwriters have written themselves into a corner is hard to shake

So, in conclusion… well I don’t really have a conclusion. This is a well made, compelling movie. As an example of some well-intentioned Hollywood types making an original, imaginative and highly watchable genre film, it should probably be celebrated, and should certainly be given preference over the thousandth pointless derivation of ‘Amityville’ or ‘The Exorcist’, or whatever else is being advertised in shades of black, grey and red on the side of buses this month.

I didn’t really feel particularly strongly about it however, and a few significant blunders and an overriding feeling of low level, aspirational smugness prevent me from really wanting to pin a ‘Quiet Place’ badge on my lapel and start enthusiastically talking it up to friends, etc. Make of it what you will, but you could certainly dial up far worse from your preferred streaming service, that’s for sure. (Just remember to wait until all potential noise-makers in your immediate vicinity have gone to sleep before pressing ‘play’.)