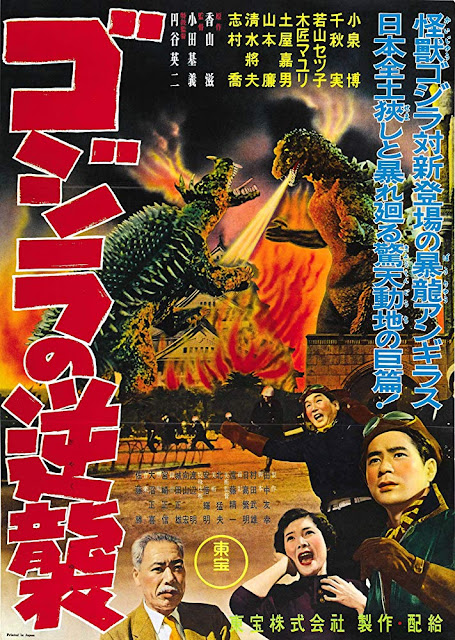 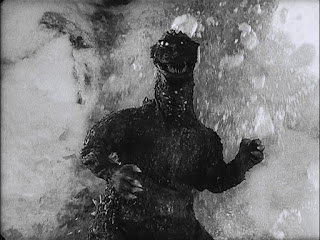 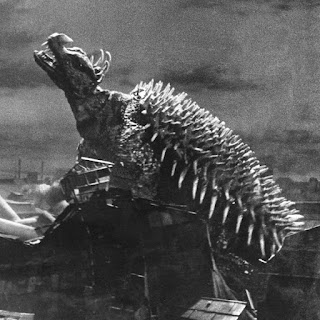 
1.
Ok, so first off – that English language title. It’s always really annoyed me. Ostensibly I suppose, it must have been intended to be read as a lazy pun on the “…rides again” suffix sometimes attached to sequels, but really this just makes it doubly nonsensical.

Firstly, given that he is a giant dinosaur with very short legs, the laws of physics decree that Godzilla is extremely unlikely to ever ‘ride’ anything, and secondly because, well -- raids? Since when has Godzilla ever raided anything? What did they think he was gonna do, hop out of the ocean and steal all the candy bars or something? When The Big G hits dry land, he is playing for keeps! This is an essential part of his character, I feel – strategy and short term goals (prerequisites of a ‘raid’) play no part whatsoever in determining his actions. When he’s on the scene, he’s just going to get stuck in and keep on rocking until something forcibly stops him (or, until he just gets tired and slinks off somewhere to have a nap, which is allowable on the basis that he basically just behaves like a 200-foot-tall cat; terrifying and adorable in equal measure).

So yeah, fuck this stupid title, and the clueless Anglophone marketing department it ‘rode’ in on. (Not that the original Japanese Gojira no Gyakushū [roughly, ‘Godzilla’s Revenge’] is much better, it must be said, but it’s at least slightly less annoying.)


2.
Though a decidedly minor effort on its own terms – the very definition of a law-of-diminishing-returns short order sequel, rushed into production after ‘Godzilla’ proved a hit, with Toho programme director Motoyoshi Oda subbing for Ishirō Honda, who was already committed to other projects - ‘..Raids Again’ is nonetheless historically significant on the basis that it establishes the template which would be followed by all of Toho’s subsequent Showa-era Godzilla movies.

In other words – Godzilla pops up like a bad penny in some random place (a remote, snow-capped island in this case) and takes on a new opponent (big spiny, armoured fella Anguirus). The resulting action is inter-cut with a somewhat charming but basically forgettable human story, and beyond that the film simply concentrates on delivering vast quantities of stuff that young boys want to see - model tanks and artillery pieces truckin’ around the place, stock footage battle-ships manoeuvring about, tiny fighter planes endlessly shooting their missiles at mountainsides, and outlandish monsters waving their arms about looking monstrous. It may all get rather monotonous for us grown-ups, but even today, show me the ten year old who wouldn’t be totally down with this relentless programme of toy town militarism.


3.
Further evidence that ‘…Raids Again’ is not exactly courting a discerning, adult audience can be found in the film’s obligatory “big governmental briefing” scene, which sadly feels like a rather tired parody of the surreal and politically charged sequence from Honda’s ‘Godzilla’.

Herein, the two daring commercial pilots who inadvertently witnessed the first big dust-up between Godzilla and Anguirus are asked by the resident ‘expert’ to pick the latter monster out of an illustrated children’s book – 1945’s The Dinosaur Book by Edwin H. Colbert, apparently.

“Yeah, that’s the guy, I’d recognise him anywhere” they basically declare, pointing to an Ankylosaurus, prompting the chief scientist to inform the assembled dignitaries that this beast is thought to have been around 150-200 feet tall (?!), and that it’s brain was located partially in its thorax, and partially in its abdomen (?!?!). He furthermore proceeds to step pretty firmly into the realm of ‘stuff we will almost certainly never know about dinosaurs’ when he declares that the Ankylosaurus was known for its extremely aggressive and territorial behaviour.

Now, I’m no palaeontologist, but… I can only assume the good folk back at the university made sure they kept this guy well out of the way when it was time to put the skeletons together. (1)

Though my sincere hope that the Godzilla sequels might play out somewhat less idiotically in their original Japanese iterations was severely shaken by all this however, it was nonetheless nice to see sober, sad-eyed Takashi Shimura turning up again as Dr Yamane from Honda’s ‘Godzilla’ (one of very few personnel to cross over to the sequel on either side of the camera).

Though the gratuitous use of repeated footage as padding is inexcusable, I enjoyed the way Dr Yamane projected a movie of Godzilla’s destruction of Tokyo from first film (notably more impressive than anything in this one), before despairingly telling Osaka’s high-and-mighty, “yes, so that’s pretty much what’s going to happen it your city. We currently have no way to stop it, and no plans for defeating Godzilla. Any questions?”


4.
I wish I could report that Eiji Tsuburaya’s effects footage here – including Big G’s first proper Kaiju battle! – are impressive enough to save the day, but sadly the monster footage too feels compromised and sub-par, compared to that seen in the first film. The Godzilla suit used in this one may have reportedly been a lot more comfortable and easier for filming, but it doesn’t look as good on screen, and, inexplicably, some of the monster battle scenes appear to have been under-cranked for some inexplicable reason, speeding up the monsters’ movements and thus ruining the natural / animalistic movements which were the chief advantage of the “man in suit” approach.

Quite why they did this, I have no idea, but if nothing else, it at least seems an apt visual metaphor for the rushed, rather slap-dash nature of this production.


5.
Despite these set-backs however, there is a certain amount of good stuff to be enjoyed in ‘..Raids Again’. A slight touch of first ‘Godzilla’s apocalyptic gravitas can be detected during the monsters’ destruction of Osaka, and the ominous black-out which eclipses the city’s famed neon signage in particular is beautifully conveyed with some well executed matte shots across the city’s harbour.

The sheer brutality with which The Big G takes down Anguirus – the franchise’s first big K.O. moment! - is also pretty cool, as is a spectacular shot during their initial battle, in which the two monsters plunge into the water from a towering cliff-face (an arresting image which would be reprised, far less successfully, at the conclusion of 1963’s ‘King Kong vs Godzilla’), and the climactic airborne attack upon Godzilla’s glacial island hang-out is excitingly and dynamically filmed, at least initially, before the tedium of all those endless tiny planes shooting off their payloads sets in.

Breezy, likeable and fairly good fun for the most part, ‘..Raids Again’ is eminently watchable, and even somewhat admirable as a finely honed bit of efficient movie-making craft, but it is of course doomed to be forever eclipsed by the gargantuan shadow of its predecessor. 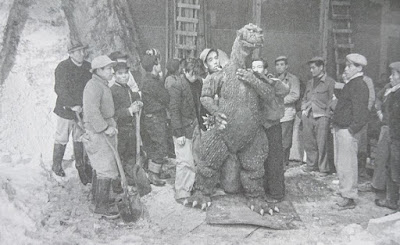 (1) In fairness – and I stress again that *I’m no palaeontologist* - I suspect that the extraordinary claim in this film’s dialogue re: the location of the Ankylosaurus’ brain could merely be a misunderstanding and/or mistranslation of the theory that some dinosaur species may have had enlarged nodules at various points within their nervous system, which helped their tiny brains to co-ordinate bodily movement and so forth...?