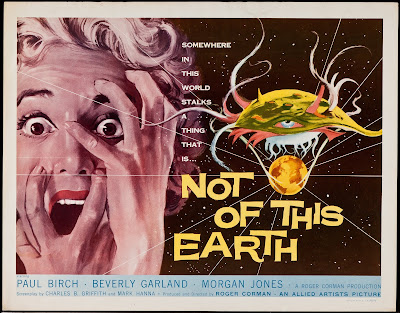 My attempts to gradually familiarise myself with Roger Corman’s pre-‘House of Usher’ filmography may have hit choppy waters last year with The Undead and Creature from Haunted Sea, but we finally make landfall here, with what must be one of the absolute best of his late ‘50s pictures.

‘Not Of This Earth’ first hit screens in February ‘57 as half of a ready-made double bill with ‘Attack Of The Crab Monsters’ and, in view of its title and poster, you may well wonder what it’s doing in the middle of a marathon of horror reviews. Well, like many of the best low budget ‘50s Sci Fi films (cf: The Man From Planet X), this one draws just as much from horror traditions as it does SF, melding the two rather nicely and inadvertently kick-starting the loose cycle of “space vampire” movies that went on to include Bava’s ‘Planet of the Vampires’ (1965), Curtis Harrington’s ‘Queen of Blood’ (1966), and, eventually, Tobe Hooper’s ‘Lifeforce’ (1985) in the process.

Admittedly, the opening scene may not bode terribly well, as a carefree bobby-soxer bids a chaste goodbye to her eager boyfriend (HIM: “don’t be a drag, you know how you flip me”, HER: “I’m hip, but if my father dug the scene, he’d put small round holes in your head”) and subsequently falls victim to the less than convincingly monstrous figure of a burly middle-aged man in a black hat and shades (Paul Birch), who proceeds to extract her blood using some kind of machinery concealed inside a suitcase.

As a characteristically modernist animated opening sequence unfolds (created by Paul Julian, this one features skulls, paint-dripping alien landscape and a roving pair of shining eyes), we would seem to be en route to yet another paranoiac “the aliens are among us” type yarn (hey, at least the special effects are cheap), but thankfully this initial premise is taken in a very different direction by Charles Griffith & Mark Hanna’s witty and relentlessly imaginative screenplay.

Next up for instance, we see the black-clad killer barging into a quiet suburban doctor’s surgery, where, using slow but precisely enunciated English that leads Beverley Garland’s nurse to assume he is some kind of visiting foreign aristocrat, he declares that he is critically ill and demands an immediate blood transfusion.

Understandably, William Roerick’s doctor is reluctant to acquiesce to “Mr Johnson”s demands, particularly given that he refuses to submit to a blood test, but the application of some voiceover psychic powers soon resolves their disagreement, with the doctor in thrall to “Johnson”, and sworn to secrecy regarding his dealings with this new patient. (1)

In fact, the doc even ends up consenting to Johnson’s wish to recruit his nurse on a full time, private basis, in order to prepare his daily transfusions and – as he puts it - “to see that I do not expire”. When Nadine (for that is Ms Garland’s character name) hears how much this weirdo is willing to pay her, she is happy to go along with this arrangement, and ends up accompanying Mr Johnson to his home, despite the reservations of her cop boyfriend (Morgan Jones), who is outside slapping a ticket on the fiend’s illegally parked sedan.

Mr Johnson’s welcoming of Nadine into his household closely mirrors the old ‘Dracula’ tradition, right down to the alien’s attempt to lock the nurse’s door without her permission, and his offering her comforts (food, access to the swimming pool) that he himself refuses to enjoy.

In fact, whilst he may be largely ignorant of human customs and behaviour, Mr Johnson nonetheless seems to know exactly how a vampire should live, and as such he has acquired an impressive mock-Tudor mansion, and has even employed a local small-time hoodlum (Jeremy, played by Corman regular Jonathan Haze) as his all-purpose cringing crony.

As well as driver, porter, cook and cleaner, Jeremy also serves duty as Johnson’s all-purpose guide to human conduct (“I told you not to drive a car before ya learn how,” he snaps at his employer in first scene). Despite happily admitting that “this guy is six kinds of a freak”, Jeremy is happy to put his suspicions on deep freeze and do Johnson’s bidding. After all, as long as his boss keeps on handing him piles of gold ingots to convert into U.S. currency, who has time for questions?

So, that’s our basic set up, and, with admirable brevity, the remainder of the film gives us something extraordinary to chew on about every five or ten minutes, regular as clockwork.

Johnson’s communication with his home planet of Davanna for instance is accomplished via a hologram-based radio transmitter and matter transfer device that he keeps in his closet, and that will turn any connoisseur of vintage space-age clobber green with envy. Describing the earth’s inhabitants to his controller as “second state, sub-human, weak and full of fright,” he subsequently recites a list of his instructions from on-high, none of the potential results of which sound very promising for the people of Earth, whose fate is either to be harnessed as blood cattle should Johnson be able to subsist on their blood, or flat-out destruction if he does not.

Next up, Johnson opens the door to Dick Miller, appearing here in the role of a dishevelled door-to-door vacuum cleaner salesman whose fast-talking patter briefly confuses the stern alien. Though he is barely on screen for two minutes before being unceremoniously stuffed in the incinerator, Miller is great here, with his unruly hair, his weary distaste for his own sales routine and his sardonic use of the word “crazy” as an all-purpose acknowledgement all suggesting that he is actually some down-on-his-luck beatnik reluctantly forced into regular employment. A joy.

Towards the end of the film meanwhile, Johnson is surprised to encounter a female of his species on the street; wearing similar wrap-around shades, she looks like a classic film noir vamp. The two aliens speak telepathically whilst browsing at a magazine stand (I wish the print was good enough for me to see what they’re reading), and the woman explains that she is fugitive who has escaped from Davanna, using the ‘dimension warp’ installed in Johnson’s closet without permission.

Johnson declares that the woman will face severe punishment for this transgression, but she responds by informing him that things have gone south pretty sharp-ish back home on their dying planet. She provides a harrowing account of Davanna collapsing into anarchy, as ‘enemy prisoners’ are drained of blood en masse to quell the hunger of the mob, prompting her to make the jump to Earth to escape the violence. Now, she too desperately needs blood, and begs Johnson to help her, prompting him to break into the doctor’s surgery where, in a horrible mix up, he selects the wrong bottle and doses her with rabid dog’s blood.

Then, just when you think you’ve already got your moneys-worth from this picture, Johnson – who is presumably beginning to feel rather desperate once the woman’s body is discovered – unveils a bizarre, flying jellyfish creature that he keeps rolled up in a glass tube(!), and sends it to attack the doctor. A wonderfully hideous, Lovecraftian creature design, this thing drops from the sky like a demonic lampshade and engulfs the poor guy’s head, Flying Guillotine style, until he ceases to struggle and thick gloops of blood trickle out from beneath it. Yowza!

Though blighted by a few minutes of unnecessary and tension-free running around in the final reel, ‘Not Of This Earth’ is otherwise a more or less perfect sci-fi/horror concoction. Clocking in at a brisk sixty-seven minutes, Griffiths and Hanna’s screenplay is superb, full of way-out ideas, razor sharp (or at least, extremely strange) dialogue and a wide variety of diverting shenanigans.

Like Corman’s more celebrated horror comedies of the era (‘A Bucket of Blood’, ‘Little Shoppe of Horrors’), the strength of the writing here makes for a film that is both eerily unnerving and genuinely funny, but with the pendulum perhaps swinging more strongly toward the former aspect on this particular occasion.

Performances too are great across the board. The odd, unnatural phrasing and impossible-to-place accent Birch employs as Mr Johnson also strike a perfect balance between humour and menace, whilst Garland makes for an absolutely swell heroine, obviously taking great pleasure in portraying a smart, capable and hard-headed woman who could easy run rings around any of the male characters.

Haze meanwhile is a gum-chewin’, street corner stupid-smart delight as Jeremy, and hell, even the cop boyfriend is kind of likeable. (You’ve got to love the moment when, after discovering that Johnson is a malevolent alien, he tells Garland “If I didn’t have to go on duty in half an hour, I’d go over there and get you out myself”.)

What I love above all most about the films that emerged from Roger Corman’s orbit across the decades (even the bad ones) is that they never play their audience for suckers. Cheap, simplistic and crassly commercial though they may be, you never get the feeling that Corman and his collaborators set out to make a movie they wouldn’t want to watch themselves.

Rarely allowing levels of enthusiasm or ingenuity to flag, Corman never talked down to his viewers the way that so many low budget operators did, only resigning himself to a “fuck it, this'll do” approach on rare occasions when the extreme haste and poverty under which his productions were undertaken made it impossible to save a picture from ignominy.

In this sense, Corman’s films strike me as a cinematic equivalent of the Marvel comic books overseen by Stan Lee during the ‘60s. Though working at crippling speed in areas of culture widely regarded as disposable, juvenile trash, these men saw no reason to let his own artistic standards slip, ruthlessly applying a credo that I’ve always taken to be one of the key rules of any creative endeavour; namely: if you set out to make something really good, with a bit of luck you’ll make something ok. If you set out to make something “ok”, you might as well give up and go home, because what you make is going to be worthless.

Though he may not have put it in quite those terms, it is this attitude that led Corman and the creatives he corralled around him to create films like ‘Not of this Earth’ – one week wonders that fell so far beneath the radar they didn’t even attract critical contempt upon their initial release, but that remain thoroughly entertaining and thought-provoking over sixty years later, keeping them alive in an era when I’ll bet 90% of the movies that gained an Oscar nomination in 1957 have been long forgotten. 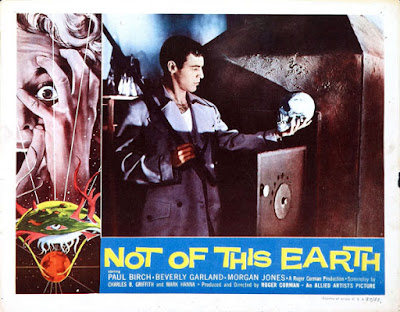 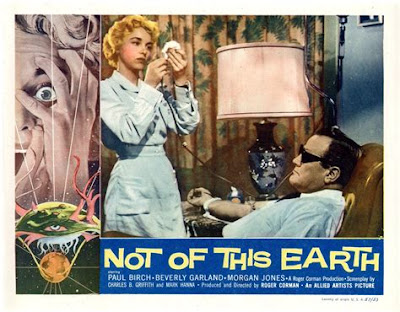 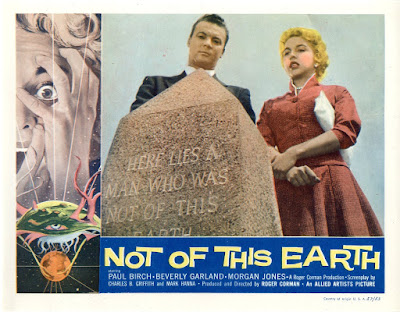 ---
(1) As an aside, I liked the decision here to name the alien “Johnson” – though clearly not a deliberate reference on the part of the scriptwriters, it puts me in mind of the “Johnsons” celebrated by William Burroughs in his novels, referring to the invisible, subterranean brotherhood of quiet, seemingly law-abiding citizens who are nonetheless always ready to help out a junkie, to harbour a criminal without ratting to the law, and to generally act in opposition to ‘straight’ society.

Three remakes later and still none of them replicated the quirky paperback charm of the original.

THREE remakes? Wow. I knew about the one with Traci Lords, but the others must have passed me by.

Given with ease with which Griffiths & Hanna knocked out an engaging, original script at short notice in 1957, the fact that the modern film industry still feels the need to keep raking over it again and again speaks for itself really...

(Thanks as always for your comment by the way Elliot!)