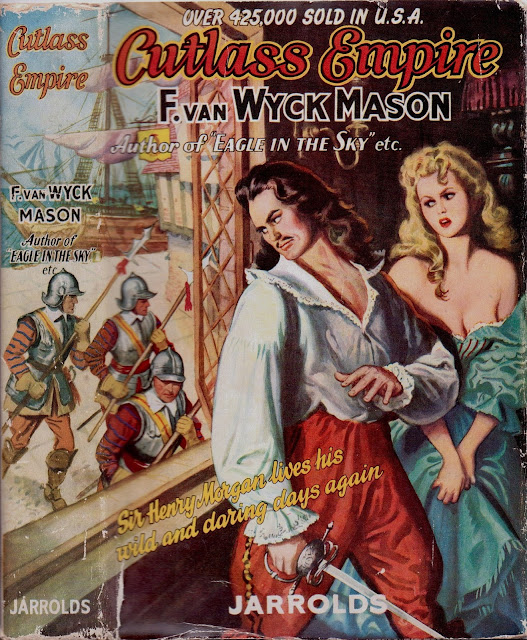 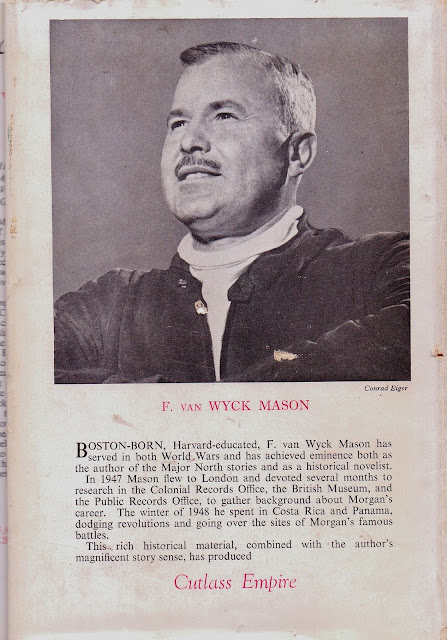 As I have probably mentioned here before, there is a tradition in the area in which I live that sees people, apparently unable or unwilling to pay a visit to the charity shop of their choice, leaving all manner of unwanted objects – furniture, books, children’s toys, random junk – outside their homes, inviting neighbours and passers-by to take what they please.

Usually, the boxes (or merely piles) of books that turn up on an almost weekly basis yield little of interest, but – sometimes – you strike gold. 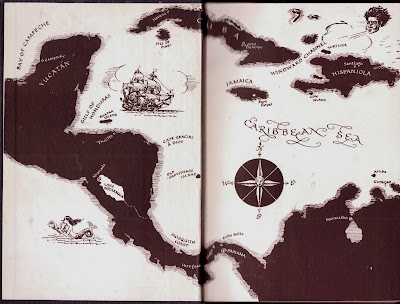 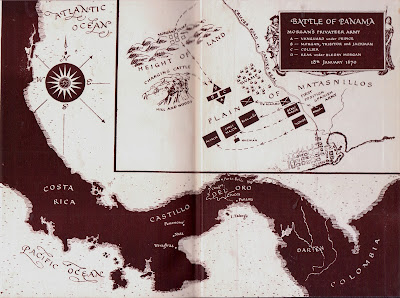 Sir Henry Morgan (1635-1688) presumably needs no introduction here, but the details of his life and death remain absolutely extraordinary, even before they received the F. van Wyck Mason treatment. (Interestingly, Morgan also provided the inspiration for John Steinbeck’s first novel, ‘Cup of Gold’ (1929), which I’d imagine must make an interesting contrast with the accounts of his exploits found here.)

F. van Wyck Mason (1902-1978) meanwhile was a prolific pulp writer of the 1920s and 30s who seems to have switched his attention to historical novels from the ‘40s onward, penning upward of fifty such volumes prior to his death at the age of 76 – presumed drowned whilst swimming off the coast of Bermuda, apparently.

Wikipedia summarises Mason’s writing style as “colourful though straightforward”, and indeed, this claim is more than borne out by a few random-page-openings of ‘Cutlass Empire’, in the spirit of which, I offer you the following;

“Aware of a powerful and steady growing appetite, Harry turned his steed into a very narrow and dark cobbled street that reeked of manure, sewage and cooking odours. He Smiled. At the other end of this noisome thoroughfare lay the Angel Inn – and Anne. Darkly demure, she should be waiting, eagerly, tenderly.

A wider grin curved the rider’s sun-cracked lips. And then there was always Clarissa to be enjoyed, providing she had not gone a-visiting up-country. Plague take it, he’d far from forgotten the curious golden-white loveliness of her hair and the fresh pink of her complexion.

He urged his mount to a faster walk. No telling when a window might open and, to a cry of ‘Ware slops!’, a bucket of swill, excreta or trash might come raining down upon the greasy cobbles.

In his mind’s eye Harry Considered Anne Pruett. Like most people born in the West Country, she wasn’t tall and her soft, dark brown hair would be caught up by a bow over the nape of her neck; there was something infinitely provocative about her slightly upturned nose and grey-green eyes, and short but vividly tinted features. Heigh-ho! A sturdy, generously built wench was Mistress Pruett’s daughter, and just blossoming into a bountiful maturity. Certes! Anne’s curves seemed designed by nature to fit, ever so comfortably, into a fellow’s arms.

Would three weeks’ separation have softened her resistance? Harry assured himself it must have. A perplexing lass, this Anne Pruett – ‘twasn’t often one came across a tavern keeper’s brat who cried ‘No!’ and seemed to mean it.”

“Enoch Jackman long since had reeled in to sprawl, snoring like a dozen foghorns, across the untidy, earthen floored bedroom, but Captain Achille Tribitor, master of a brigantine just returned from a moderately fortunate cruise off the coast of Cuba, continued singing louder than ever. More than half drunk, he plucked at a Potuguese guitar and happily serenaded the various gecko lizards reposing themselves against the palm thatch roof of Anytime Polly’s ramshackle ordinary.

As for Morgan, he sat glowering at an earthenware jug of fiery rum which had cost him the exorbitant sum of two pistoles; the stuff wasn’t worth even a tenth of that sum, but, in Cayona, one had to expect such brigandage.

The more he considered old Watts’ contemptuous dismissal of his plea for even a small independent command, the more resentful he grew. Not one of the other captains had led his men so successfully that his command had not been reduced by a single casualty.

‘The Devil fly off with that old wrinkle-belly,’he gloomed. ‘If only he wasn’t Susan’s father –-‘

Ready good nature mercurially restored, Morgan bellowed with laughter at the vision of a pagan god perched among the elms shading the old walled farm in Llanrhymny. He remembered now if whom the the ‘Red Rose against the Grey Wall’ reminded him.

Susan! By heavens – was it not utterly amazing that so charming and delicate a maid could thrive on the roistering coast of this barbaric island – like a beautiful flower on a dung heap?

Rose! That’s what Susan was – a rose. Morgan smiled to himself – a wise, private little smile. Dear Susan. After the soul-dulling brutalities, the crass savagery, the unbelievable obscenities he had experienced in the past three years, her presence was like a long cool draught to a sailor perishing of thirst.

Tribitor struck a loud chord on his guitar. ‘One observes,’ he remarked, ‘that you, mon ami, are at heart a poet and a great trouveur. Surely the angels in le bon Dieu’s heaven must be envious.’

‘Aye, I’m a poet,’ Morgan admitted. A rare, a supremely wonderful, inspiration was kindling his imagination. What of that golden rose from the bishop’s palace? True, he had been saving that superb example of the goldsmith’s art for an especially auspicious occasion, but by heavens he wasn’t going to wait! Tonight – yes, this very night, gallantly, humbly and devotedly – he would toss his golden rose through Susan’s window!”

“Hopeful, but not yet satisfied, Morgan watched a gradual change cover over those dark and predatory faces. Tongues slipped out to lick sun-cracked lips for all the world like those of so many cats congregated about a fishmonger’s barrow.

Morgan leaped into the circle of firelight, glared at Gascoigne and shouted him down by sheer lung-power. Out on the ships anchored in the river, crews heard his bellowings and grinned.

‘Do you know what this timorous fugitive from a school for young women is going to say? I do! He’s going to warn you that Porto Bello is guarded by five strong castles--’

‘Aye, there are five, but there’ll be no call to reckon with more than two of ‘em – maybe only one – provided you follow my orders to the letter. From the stone on which he stood Morgan’s large and vivid black eyes flickered from one to another of his captains’ faces.

‘I intend to attack the city from its rear and so ignore those great forsts at the entrance to the harbour. Now listen.’ Like the skilful speaker he had become, he lowered his voice. ‘Hearken, all of you. I intend to descend to Estera Longa Lemos, land our forces five miles to the north of Porto Bello and then circle inland to gain the city’s rear. Since the greatest part of their batteries point to seawards, and since the Dons have no suspicion of our presence, why, we’ll be into their town before they half wake up!’

‘But, nom d’un chien!’ Gascoigne roared. ‘The Spaniards are commanded by Castellon himself – the best and bravest of their generals!’”

And so on. You get the general idea, I’m sure.

A work of almost incalculable entertainment value, ‘Cutlass Empire’s 422 uninterrupted pages of this-sort-of-thing first saw print in America in 1949, so we can presumably date this British edition to some time shortly thereafter.