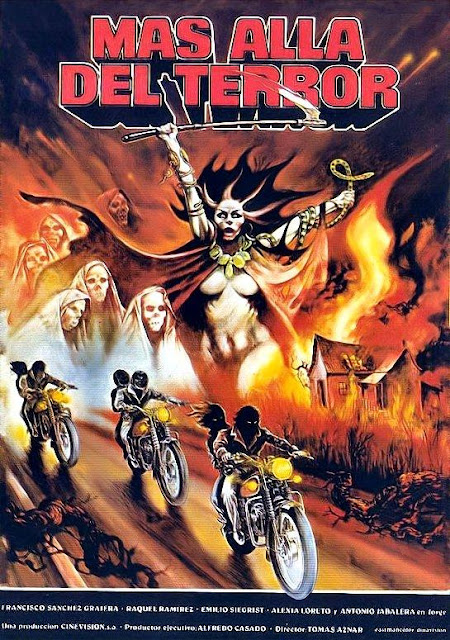 The more I learn about global genre cinema, the more I appreciate those increasingly rare opportunities to jump into something with absolutely no idea what to expect. As such, this remarkably obscure Spanish horror - available solely as an extremely smeary VHS-rip, insofar as I’m aware - proved a rare treat.

Going in, all I knew about Tomás Aznar’s film was:

1. It features some pretty great electro-rock music, which was once featured on an episode of El Diabolik’s Psychotronic Soundtracks.
2. It was released in Spain under the auspices of ‘Cinevisión’, the same company responsible for Escalofrío / Satan’s Blood a few years earlier.
3. It was advertised using the fairly awe-inspiring, Frazetta-plagiarising poster you see reproduced above. (1)

All in all then, the omens looked good.

Perhaps one of the things which has led to ‘Mas Alla Del Terror’ receiving so little attention from horror fans is the misleadingly mild pre-credits sequence, which sees a young woman (Lola, played by Raquel Ramírez) being picked up from a roadside café by an older man, with the couple’s earnest dialogue suggesting that they are engaged in some kind of long-term adulterous relationship.

Lola insists on taking her partner to some out of the way, rural idyll, where, in a matter of seconds, things go from second-rate Truffaut to full-on Ruggero Deodato, as she attempts to steal the man’s wallet, prompting him begin savagely beating her, before she in turn pulls a knife and remorselessly carves him up.

“Dirty fucker - this ain’t shit buddy,” she exclaims as she contemptuously pockets the measly few pesetas which comprised his roll, wiping her blade on his tie and leaving him bleeding out from multiple chest wounds as she sets out to hitchhike back to town. Yikes!

Post-credits, we re-join Lola in what seems to be her more natural habitat, rocking regulation leathers as she trades sneering, scatological insults with the other members of her equally amoral, drug-huffing misfit biker gang (“Fuck, you smell like camel shit - find yourself a good dentist”, she greets a dealer dishing out wraps of hash outside a nightclub).

From here, the movie kicks into gear as a kind of ‘Mad Foxes’-via-‘Last House..’ type psychotic youth-gone-wild gang movie, as these punk kids indulge in all kinds of gratuitous cruelty, exchanging dialogue that (if the fab-subs to be believed) consists largely of increasingly obscene sexual insults, which I won’t recount here lest they offend the sensibilities of the very internet itself.

After an attempt to rob a greasy spoon cafe (dig that low level of ambition) escalates into an impromptu killing spree, the gang - who now essentially comprise Lola plus leader Chema (Francisco Sánchez Grajera) and wingnut Nico (Emilio Siegrist) - briefly go on the road ‘Rabid Dogs’-style with a pair of hostages. So fucked up are our anti-social anti-heroes though, they can’t even keep this relatively straight-forward scenario on the road for more than five minutes of screen time, before internecine bickering leads to a roadside altercation soon leaves them lost in the depths of the countryside with a totalled car.

Spying lights as they trudge across the featureless nocturnal landscape, the gang come upon a well-appointed house, and, as you might well expect, get stuck straight into a dispiritingly gruelling home invasion scenario. After taking a tyre iron to the family dog (mercifully, VHS murk obscures this footage, but I REALLY hope the whines of canine distress on the soundtrack aren’t genuine), they proceed to remorselessly brutalise the elderly lady they find within, whilst her youthful grandson (we presume) hides terrified upstairs.

Mindlessly destructive brutes that they are, the gang have soon set the house alight, leaving the helpless residents to perish. But wait! As it turns out, the poor grandmother they've just left for dead was actually a high-ranking Satanic priestess of some kind, and she proceeds to curse them with her dying breaths, promising supernatural vengeance in the name of Astaroth, Beelzebub and the whole merry gang!

Shortly thereafter, the gang and their hostages once more find themselves shit-out-of-luck transport-wise, holed up in a remote, ruined church with eerie, skeleton-filled catacombs beneath it - by which point, we can probably get a handle on where things are heading next, I should think.

It’s a shame however that the pacing of this horror-themed second half of the film pretty much grinds to a halt in comparison to the frantic, action-packed stuff which has preceded it. Much aimless waiting and wandering fills up the remaining minutes of run-time, whilst I also found the idea of having the evil-doers’ victims return in spectral form to wreak their ironic vengeance - much in the manner of a Japanese kaidan - to be pretty old hat. I mean, couldn’t they have rustled up a few demons or zombies or something, instead of just going with the old EC Comics “b-but I saw you, you were dead - arg!” route?

Well, no matter - on the plus side, they certainly picked a great location for it - an arid, rustic set of ruins which just reek of poverty-stricken misery and menace. There's a lot of great Armando de Ossorio / ‘..Blind Dead’ type atmosphere to enjoy here, not least when the acrid, cobweb-shrouded skeletons in the catacombs are briefly unleashed to take care of the Stockholm Syndromed female hostage, whilst things are livened up considerably by intermittent outbursts of the aforementioned killer, Goblin-esque disco-rock (courtesy of one J.P. Decerf and the ever-reliable CAM library). (2)

Even beyond their penchant for senseless murder meanwhile, there’s something singularly warped and repulsive about the gang members here, as they fill their remaining hours with low level blasphemy and icky sexual perversity (at one point one of the guys aimlessly masturbates into the fire whilst shrieking an improvised litany in praise of “fornication”), sneering and drooling in the face of death like true no-hope punks.

As the remaining characters gradually meet their predestined demise, new elements are added to the medieval ‘triumph of death’ mural which takes pride of place on the church’s walls - a common ‘body count movie’ motif, but nicely done - heralding the eventually reappearance of the avenging witch, and a rather fine, high five-worthy ending which I won’t spoil for you here.

Whilst I certainly wouldn’t go so far as to hail it as a lost classic, ‘Mas Alla Del Terror’ is, as you may have gathered, wild as all hell - an off-the-map rampage of low rent sleaze, grime and amoral hell-raisin’ which gradually finds itself enveloped by a cloak of old school, Iberian gothic doom.

Production values are minimal, performances are perfunctory (aside from Ramirez, who is brilliant, and should clearly have wielded her flick knife in more movies) and Azner directs with no great amount of flair, but there is nonetheless a ton of fun to be had here for a certain, special audience. Indeed, I’m amazed that this film’s potential has remained largely untapped by all the late-era Euro-horror / video nasty fans out there.

It would certainly be lovely to see a restored version popping up at some point in the future, but for now, let’s just say that this one is well worth a trip down to the VHS/torrent catacombs if it sounds like your particular cup of rancid, spiked tea.

(1) Apparently originating on the cover of ‘Vampirella’ # 11 in 1971, this iconic Frank Frazetta witch illustration seems to have had a big impact on horror movie poster artists - it was also recycled just a blatantly for the remarkably misleading advertising which accompanied Matt Cimber’s perennially underappreciated The Witch Who Came From The Sea in 1976.

(2)Once again, thanks are due to the aforementioned El Diabolik podcast for filling me in on the soundtrack info and name of the composer. Check out Episode 46 of their fine programme to hear some of the music from this wild out in the wild.