A bit of a treat for you today – perhaps my favourite pulp book find ever. Rarely has 95p been better spent. 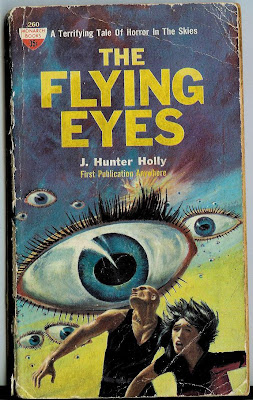 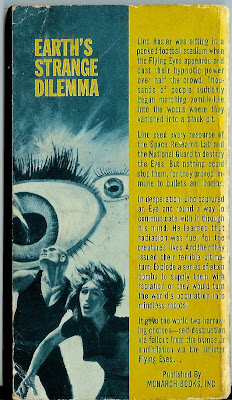 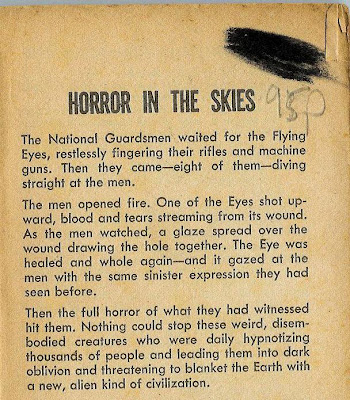 I actually read this one all the way through – how could I not? That was a few years ago, but my memory of what transpires within goes as follows:

The memorably named Linc Hosler is our protagonist, and he and his best buddy Wes are both daring research scientists working over at the Space Research Lab, although they seem to spend most of their time hanging around at their friend Kelly’s house. They both seem to be competing for Kelly’s attentions, but refuse to admit this to each other, leading to a great deal of unspoken jealousy and resentment between them. Kelly, for her part, makes it clear that she doesn’t like either of them very much, and wishes they’d go away and get on with their daring research science, or whatever. They all sit around and eat a lot of steaks, and hamburgers. There’s an annoying dog who keeps getting in everyone’s face. Frankly, the whole situation is pretty grim, and to make matters worse, there are all these Flying Eyes popping up all over the place, hypnotising everybody and marching them off to a ‘black pit’ in the woods.

In the grand tradition of human storytelling, a bunch of other stuff happens, some of which I seem to recall involves Linc Hosler taking surrealism to new heights by trapping one of the Eyes in a cage and poking it with a giant stick so that it has to keep blinking, nullifying it’s hypnotic power. I think he learns to communicate with it telepathically, presumably enabling him to ask probing questions like “ok, seriously, what the hell?” I mean, where would you even start?

In any case, Wes gets dragged off to the black pit, Linc is wracked by guilt because his jealousy caused him to let down his former best pal, some other stuff happens, I think someone sets off an atomic bomb, or maybe not, but either way the whole thing ends, as any good pulp sci-fi should, with a guy, a girl and a dog, all of whom have been drawn closer together and learned to understand each other better during their epic struggle against the Flying Eyes, surveying the wreckage and vowing to rebuild the human race upon foundations of love and rationality, two qualities which it must be said ‘The Flying Eyes’ has been somewhat lacking in up to this point, so good luck to ‘em, and let the procreation begin! 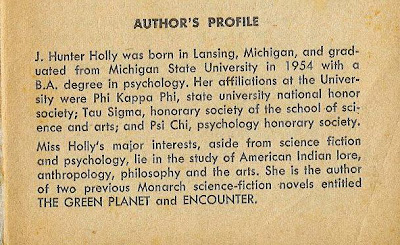 A sporadic career writing other science fiction books throughout the '60s and '70s, and aside from that, total anonymity on the world wide web, it would seem.

This one, written the same year, sounds quite good, but it's no Flying Eyes: 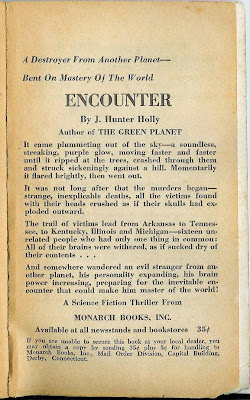 Wow--any blog which opens with Delia Derbyshire, and follows it up with pulp covers and a Morse code biography of Tesla, is exactly the sort of blog I want to read. great stuff!

Why, thanks! Much appreciated.

I've been enjoying looking through the archives of your blog too actually - all great stuff, and the mass pulp cover posts and righteous demolitions of awful covers are hitting the spot particularly well! Good stuff.

I'm very fond of "The Dark Planet" by J. Hunter Holly, and I enjoyed your post.

I'm glad to know the author isn't banished to "total" anonymity on the Web, thanks to you. But yours is the only review I found of any of her books so far.

J Hunter Holly was a lady, actually Joan Carol Holly who died of lung cancer in 1982 aged 50. I'm a big collector of Joan's books and have posted a Wikipedia page dedicated to her if anyone wants to know more.
If any family member or old friend of Joan should happen to read this post, I'd appreciate it if they would contact me via initially leaving a post here..

Joan was my great aunt and died when I was 12. I remember meeting her on two occasions. She loved her cats and I never saw her without a smoke in her hand. She was an intellectual and came from a talented, artistic family. She lived with her sister, Joyce, who was also an artist. Joan may have suffered from agoraphobia later in her life. She had beautiful, thick, black hair and wore glasses. My mother has many memories of Joan and Joyce and admired them both very much. I'm so glad you are keeping her memory alive.

Hi, please contact me at 'ron_tufft@rediffmail.com' as I may have info for you and photos of Joan, it may be that you could pass on info to me. I hope so...
please read my review 'The Gray Aliens' on Amazon, it may explain my interest to you. Take care...

Lookingglass - we must be related somehow. My grandfather Doug Hunter and Joan were 2nd cousins, so I'm curious how we connect too. Please drop me a line, I'd also be glad to find out any info you have.

And Ron, glad to see you are still doing research. We should communicate again soon.

I just read her novel called THE MIND TRADERS and it was fantastic. Her portrayal of the alien society was fascinating. This lady must have been quite the genius and indeed she was a great writer. To bad she died so young.

I set up a page on Facebook to connect with any of Joan's fans, friends or family. You can find it here: