Further to my post last month regarding the disappearance of the Found Objects weblog, I’m happy to report that the blog now has a new home here, and that many old posts (including some of my own) have been dragged from the depths of the interweb and reinstated, whilst new additions have thus far been popping up on a regular basis.

Huge thanks are due to Pete aka Bollops (sometime proprietor of Boring Old Books) for bringing this resurrection about, and I am hoping I can play a part in making sure the new site remains a going concern.

Interested parties are encouraged to read, follow, spread the word, contribute [but not arbitrarily delete, please] at their leisure.
Posted by Ben at 15:53 No comments: 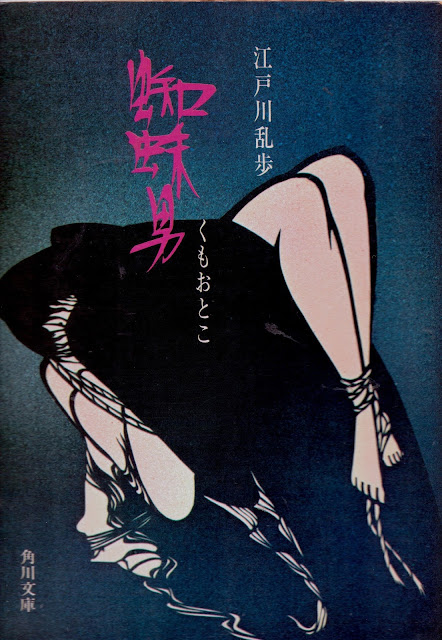 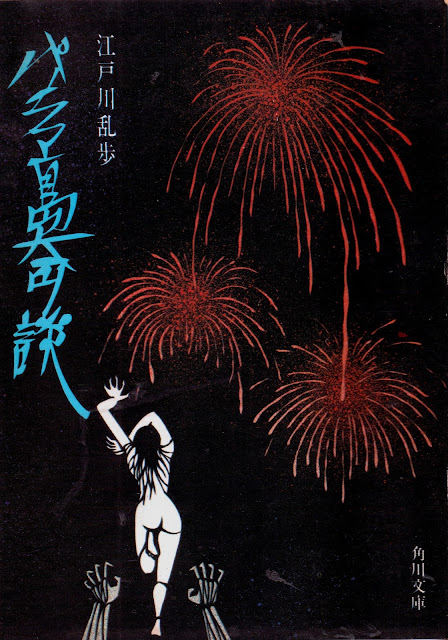 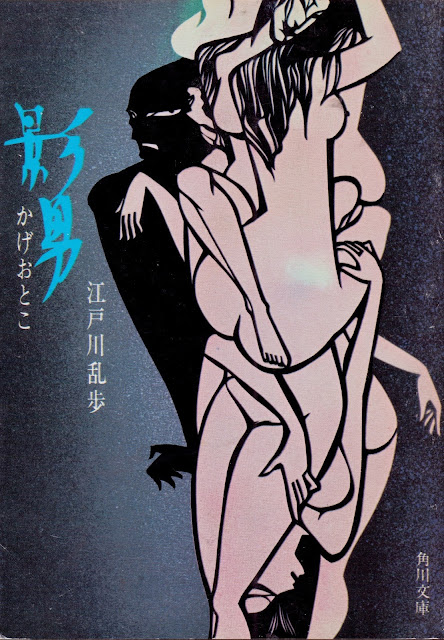 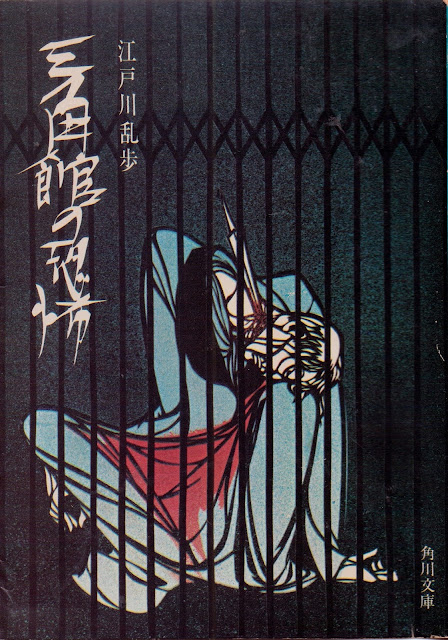 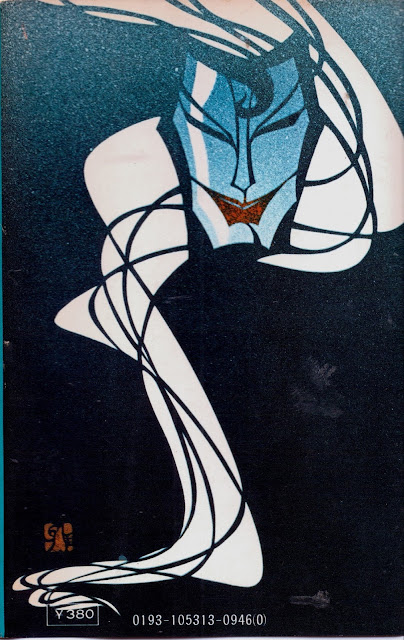 We return here to our old pal Edogawa Rampo, with four random entries from a long series of paperbacks collecting his stories, issued by Kadakawa Books during the 1970s. The superb cover illustrations are provided by paper-cut artist Masayuki Miyata (1926–1997), a framed example of whose work we previously saw displayed at Rampo’s house [see link above].

Each of these volumes contains several tales, but the names / title stories, in the order they are displayed above, are:

The fifth image is a generic series illustration, repeated on the back cover of all four volumes. In common with many Japanese paperbacks, the artwork is printed on detachable, hardback-style dust jackets -- which is pretty cool.

Though I have been banging on about him occasionally on the blog for quite a while, it is only in the past year or so that I have actually made the effort to begin tracking down and reading Rampo’s stories in English translation, and, even more-so than I might have expected, they are absolutely extraordinary.

Though capsule biographies of Rampo often tend to paint him as a devotee of Western-style mystery and detective stories, the way in which he spikes the conventions of coldly logical, whodunit detection with the irrational perversity of human desire feels uniquely transgressive, unlocking fearful vistas of ambiguity and apprehension that place him within an aesthetic world that is entirely his own; a world that I feel is brilliantly captured by Miyata’s artwork.

I picked these books up for peanuts in Nakano Broadway, and now just wish that I could read them.
Posted by Ben at 17:33 2 comments:

The Adventures of John Carpenter
in the 21st Century:
The Ward (2010) 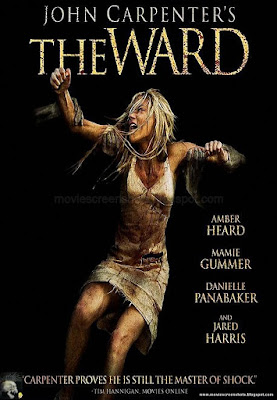 Ok, so – let’s try to get this one over and done with as quickly as possible.

2010’s ‘The Ward’ is, at the time of writing, John Carpenter’s most recent film as director. I haven’t had a chance to do any research or read any interviews pertaining to Carpenter’s reasons for taking on the project, but I can only speculate that he must have agreed to do it as the result of some sort of personal favour or family obligation.

Was one of the producers his son-in-law or daughter-in-law or something? Or was it all a country club handshake deal with an old friend, or somesuch? I don’t know.

Such speculation may seem facetious, but I honestly just can’t think of any other reason – creative, artistic, even economic - for The Great John Carpenter return from semi-retirement to lend his talents to this thoroughly mediocre indie horror movie. (The only other possibilities would seem to involve blackmail or mob intimidation, but best not go too far down that line of thought.)

Unfortunately, pondering such back stage machinations is actually a more enjoyable prospect than trying to talk about ‘The Ward’, which is…. well, to be fair to it, I should probably admit that I’m perhaps not best placed to pass judgement on a film like this.

I watch very few contemporary horror films, and when I do make the effort, I tend to stick pretty strictly to those that have attracted positive critical attention or good word of mouth from people whose opinions I value. When it comes to what you might call the “next rung down” - the middling, largely unremarked efforts - whether mainstream studio releases that pop up for a few weeks around Halloween, or cheaper, straight-to-streaming imitations thereof – well, let’s just say that I don’t have enough experience to really assess how ‘The Ward’ stacks up against them. Is it a respectable effort in this vein, or an absolute stinker? Is it even quite good, as far as these things go? I really don’t know.

What I can say with slightly more authority is that, in and off itself, I thought it was pretty awful. A painfully derivative, blandly conceived effort that in the course of vaguely trying to be ‘clever’ and ‘serious’ (and failing on both counts) seems to have had everything that used to make lower budget horror movies fun systematically sucked out of it.

In particular, ‘The Ward’ serves to demonstrate the way in which themes that used to be (correctly) roped off as pretty heavy stuff within the genre – childhood trauma, false memories, mental illness, confinement, torture etc – have now become tokenistic horror signifiers, to be lazily thrown around and mixed up to no particularly clear purpose (or even just for the sake of good ol’ exploitation and sleaze, which is notably absent here).

Unlike the werewolves and Satanic cults of old furthermore, this kind of stuff is really just no fun without a decent storyline or committed performances to go with it, which leads to make me wonder why ‘The Ward’ and countless films of a similar ilk continue to even get made…. but, enough of my proto-geriatric ramblings.

In purely technical terms, it goes without saying that ‘The Ward’ is pretty well made. Compositions and camera movements are as slick as you’d expect from a director of Carpenter’s calibre, and the movie’s scary/ghosty bits are reasonably efficient, doing more or less what they are supposed to do.

Essentially though, getting John Carpenter behind the camera on this thing feels like putting a Rolls Royce engine inside a lawnmower, with literally no other aspect of the production rising to a level that would normally justify his participation or interest.

Going in, I was hoping some interest might emerge from the fact that much of the movie takes place within an all-female psychiatric ward, potentially allowing Carpenter to work up a sort of gender-reversed take on ‘The Thing’, perhaps? Well - no dice. I’m afraid anyone coming to ‘The Ward’ in search of a new twist on the director’s conflicted approach to gender will be sorely disappointed. A crass (or merely unimaginative) casting process results in the titular ward resembling a retreat for troubled super-models, and the script gives none of the actresses anything to work with, should any of them have had a yen to make something of their characters.

To give an indication of just how sloppy ‘The Ward’ gets as a character drama, the bulk of the action is supposed to be set in the 1960s, but upon first viewing I completely forgot about this until a retro, ‘Ghostbusters’-style ambulance rolled in for one of the closing scenes, such is the contemporary (or merely bland) nature of the cast’s dialogue, behaviour and appearance.

As you might gather from this, production design shoots for ‘austere’ but instead merely hits ‘boring’, with the drained colour photography and depressing aesthetic of white walls, iron radiators, peeling paint, empty rooms and the like predominating.

Built on confusing morass of flashbacks, flashforwards and god knows what, the story is superficial, poorly developed and pretty unconvincing, highlighting once again the extent to which the post-‘Sixth Sense’ obsession with trick endings and clunky, heavily signposted misdirection has so often made watching modern horror movies a drag.

And… what else can you say really? I think I’d best call it day on this one. Basically, I just really, really hope that John Carpenter manages to come back and direct something else at some point in the future, even if it’s just a cartoon or a short or something, because it would be a tragedy to see such a wonderful filmmaker go to his grave with this shrug of a movie as the final item on his CV.