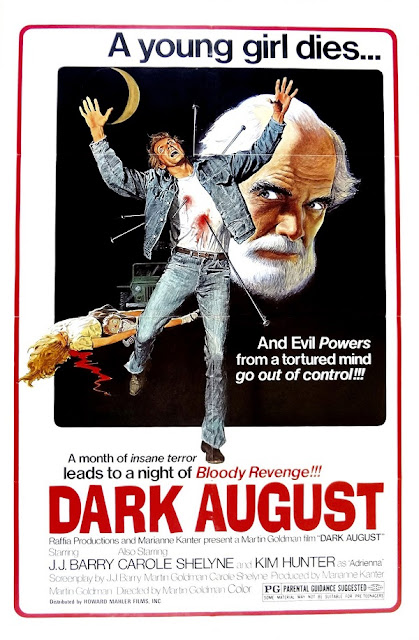 By far the biggest revelation unearthed by Arrow Video & Stephen Thrower for the second volume of their admirable American Horror Project, ‘Dark August’ is a low key supernatural thriller shot in Stowe, Vermont in 1976. Never a high profile cult item, the film has, I would suspect, flown entirely beneath the radar of the vast majority of cult movie aficionados prior to its HD resurrection this year; a circumstance that seems extremely unfair after watching it for the first time.

To put it simply, ‘Dark August’ is excellent. If you’re a fan of subtle, slow-burn horror, films with a folk-magic / witchcraft element or independent ‘70s U.S. cinema in general, I would recommend obtaining a copy of Arrow’s new transfer and watching it post-haste.

Although this was a 100% independent production, written, directed and performed by a small collective of Vermont residents with no external funding or distribution deals in place, the finished film exists on an entirely different plain from most of its competitors in the regional horror sweepstakes. Not a “higher” plain necessarily (I don’t want to sound like I’m belittling the noble tradition of independent commercial filmmaking in the USA here) - but a different one, for sure.

The first thing which struck me about the film is its uncanny mixture of stylish, technically accomplished filmmaking (particularly in terms of its editing, camerawork and presentation of the natural environment), and candid naturalism in terms of its performances, plotting and character interactions. A very ‘70s combination, I would suggest, but one which was rarely attempted, let alone achieved, by filmmakers outside of the artier end of the Hollywood industry.

Far away from the work of even the most sophisticated of ‘70s independents (Romero, Hooper etc), ‘Dark August’ instead feels more like a distant cousin to such studio-backed quasi-horror films as Altman’s ‘Images’, Roeg’s ‘Don’t Look Now’ (definitely a conscious influence, I suspect), or even Philip Kaufman’s remake of ‘Invasion of the Body Snatchers’ (which admittedly was made a few years later, but still).

Plot-wise, director Martin Goldman and actors/writers J.J. & Carolyne Barry keep things pretty minimal here, with a set up that on paper sounds like TV movie / short story material at best, but through careful attention to detail, and by zoning in on psychological nuance, they still manage to create an intriguing and open-ended narrative.

Following a messy break-up with his wife, forty-something New York advertising artist Sal Devito (J.J. Barry) has relocated to a small Vermont town to start life afresh, apparently following in the footsteps of his best friend Theo (Frank Bongiorno), who lives nearby and appears to have given up the rat-race to become a potter. During his first year of rural life, Sal has instigated a swell new relationship with Jackie (Carlyne Barry), who has recently established a small art gallery in the town.

Less happily however, Sal has also caused the death of a local young girl, killed when she ran in front of his jeep on a lonely road (a traumatic event which we repeatedly relive alongside him in flashback through the course of the film). Although Sal has been cleared of responsibility for this tragic accident in court, coming to terms with it is not so easy, particularly given the suspicion which already hovers over him as a loud and gregarious outsider moving into a small, insular community.

As the film opens, we see the dead girl’s grief-stricken grandfather turning to age-old sympathetic magic to exact vengeance upon Sal, who, as a result, is about to find himself haunted by something a little more tangible than mere repressed guilt and mid-life angst.

The very definition of a ‘slow burn’, ‘Dark August’ keeps its horror content simmering down at the level of vague, background uneasiness for a good forty-five minutes or so, but in the meantime, it gives us a generous and detailed portrait of the lives of this small group of interlocking friends (Sal, Jackie and Theo, plus the latter’s new age-y girlfriend Lesley (Kate McKeown)) as they haphazardly attempt to establish an idyllic, post-counter-culture environment for themselves in the depths of Vermont’s green hills, reinvigorating the sleepy local community with their arts n’ crafts, pot-smoking, tarot-card reading take on rural life.

Given that much of the film was reportedly shot in director Goldman’s own house, and that Bongiorno, McKeown and the Barrys all seem to have been real-life escapees from NYC, I’m guessing that ‘Dark August’s creative team had very direct, personal experience of the situations experienced by the characters herein, and as a result the quiet, subliminal tension between the locals and more cosmopolitan incomers is believably conveyed throughout.

Indeed, although we see this world through Sal’s eyes, there is a distinct ambiguity here regarding who we were actually supposed to sympathising with, suggesting that the film’s supernatural storyline could easily have functioned as an analogue for the filmmakers’ sense of uneasiness regarding their own intrusion into the community around Stowe, Vermont.

It is interesting to note that legendary comics artist Stephen R. Bissette, a lifetime Vermont resident who grew up near the film’s shooting locations, states in his essay accompanying the Arrow release that he finds J.J. Barry’s Sal a deeply dislikeable protagonist and was rooting for the locals throughout, gleefully anticipating the grandfather’s spiritual vengeance. As a city-dweller watching in his London flat though on the other hand, I personally found Sal and his friends to be quite relatable (his refusal to button up his shirt properly notwithstanding), and I enjoyed spending time with them. In keeping with the film’s inevitable designation as “folk horror”, could there be a deeper comparison to be drawn here with the moral ambiguities of ‘The Wicker Man’?

As Sal is increasingly plagued by stomach pains, inexplicable losses of control and unnerving glimpses of a hooded, “spirit of dark and lonely water”-like revenant haunting the woods around his property, Goldman does an excellent job of conveying the character’s increasing sense of paranoia and disorientation, ratcheting up the unease into full-blown menace and setting the stage perfectly for the late introduction of the film’s one ‘name’ performer, Kim Hunter – the widely esteemed method actress who played opposite Brando in 1951’s ‘A Streetcar Named Desire’ and went on to earn a steady living as Zira in the ‘Planet of the Apes’ franchise.

Here, Hunter plays Adrianna Putnam, a backwoods witch and psychic counsellor who takes up Sal’s cause after Lesley urges him to consult her - and by anyone’s estimation, she does so brilliantly, using her reportedly genuine interest in the occult to invest the role with the kind of unassailable, “shit just got real” gravitas which adds greatly to the film’s genuinely hair-raising finale.

The organic / atavistic treatment of magic(k) in ‘Dark August’ feels disarmingly matter-of-fact, yet also horrifically tangible, and as things build to a magic circle-bound, battle-of-wills showdown, there is a sense of real exhilaration to be savoured as we realise that a film which initially felt an off-brand version of one of those New Hollywood-type movies where Warren Oates and Harry Dean Stanton hang around on their porches mumbling to each other, has transformed itself into a full-on ‘The Devil Rides Out’ type proposition, having reeled us in slowly but surely until this transition seems completely natural, and indeed pretty terrifying.

‘Dark August’ is not a perfect film by any means, and I hope I’m not overselling it here. Since you’re asking, my chief complaint would probably be that the story could have worked a lot better if the revelation that the grandfather character actually was instigating a magical attack against Sal had been withheld until the end, thus allowing us to relish the possibility that his problems were solely the result of his own supressed guilt and paranoia, and making the blood n’ thunder action of the finale that much more powerful.

Given that this was a regional independent production offering little in way of obvious exploitation thrills though, I’m guessing that they simply had to put some horror signifiers up front in order to get the film even the very limited distribution it did achieve on the drive-in circuit; so, I won’t hold this missed opportunity against them, and it certainly doesn’t stop ‘Dark August’ from standing out as a vastly more rewarding film that I ever would have suspected – one of my top horror discoveries of the year, without a doubt.

Increasingly these days, dedicated genre film fans could be forgiven for thinking that mid-20th century English language horror films have been picked over so thoroughly – analysed, fetishised, celebrated and monetised – that we surely must have reached the end of the line by now. It’s all too easy to feel that everything special, weird and noteworthy within this finite canon must by this point have been identified as such and commended to our collective attention, leaving critics and blu-ray labels increasingly dredging up the silt as they struggle to remain relevant.

Huge and heartfelt thanks are therefore due to Arrow, and to Stephen Thrower, for renewing our faith and for reminding us of one of the core motivating principle underpinning any adventurous movie fan’s endeavours: there’s always another one. There’s still gold in them there green hills, and ‘Dark August’ is a nugget that proves it.