It’s been a long time since I’ve had a chance to settle down with a ‘Krimi’, but earlier this month I was suddenly struck with an urge to check in on Rialto Films long-running series of ‘60s West German Edgar Wallace adaptations, and 1964’s ‘Der Hexer’ (offered up to English-speaking audiences at some point under the far less enticing title of ‘The Mysterious Magician’) fit the bill nicely.

As might well be expected from a Wallace film, our Hexer / magician here is not an actual magician (of either genuine or stage variety) but instead a wily, Fantomas-type super-criminal. In keeping with this, ‘Der Hexer’ leans strongly toward the part of the ‘60s pop cinema venn diagram that sees the aesthetic of the krimi cross over with the more whimsical end of the era’s Eurospy / ‘moving comic book’ sub-genres, as exemplified by the ‘OSS 117’ and ‘Fantomas’ movies being overseen by André Hunebelle in France at around this time. Nonetheless though, director Alfred Vohrer still manages to cram in a few gothic flourishes along the way.

This melange of styles can be clearly seen in the film’s super-pulpy shock opening, which sees a solicitor’s foxy secretary shrieking as she is overpowered by a pointy-shoed assailant, before we cut directly to a view of her lifeless body, apparently enclosed within what looks to be a groovy little two-man submarine! This sub, it transpires, is being pushed beneath the water of what seems to be some kind of vaulted, subterranean drainage chamber, by an imposing, barge-pole wielding man who bears a passing resemblance to a young Boris Karloff.

I don’t know about you, but three minutes in and I’m confident that this movie is going be pretty great.

Once the movie-proper beings, a prototype swinging London / mod type vibe seems to be in play as we follow a beautifully turned out, mod-ish young blonde lady (Elise, played by Sophie Hardy) as she trades barbs with a revealingly attired, curvy young secretary (Finnish starlet Anneli Sauli, returning from Vohrer’s The Dead Eyes of London) in what, rather unexpectedly, turns out to be the office of a senior police officer.

Who could it be of course but that rakish silver fox himself, Joachim Fuchsberger, appearing here in the role of the dapper Inspector Higgins, a man clearly intent on shakin’ the dust off those other squares in Scotland Yard!

Chief target in the dust-shakin’ department is Higgins’ blustering superior Sir John (recurring krimi authority figure Siegfried Schürenberg), and through the antagonistic banter between the two, we soon learn that the girl whose body has been found washed up on the bank of the Thames was one Gwenda Milton of 17 Barkley St, London, and that her brother, currently based in Australia, is none other than Henry Milton, better known as that most notorious of villains… Der Hexer!

Time for a quick cut, and we find mention of that name putting the very fear of god into Jochen Brockmann, that seedy fat guy who appears in all krimis, working his usual magic here as Herr Messer, the unsavoury solicitor for whom the dead girl worked as secretary.

Messer, it turns out, is actually running a white slavery ring in cahoots with that Karloff-looking guy (Carl Lange) and a couple of other, similarly salty characters. (Hilariously, Messer keeps the door control for the secret passage in his office inside a bear skin hanging on his wall –the bear’s eyes flash when someone in the secret passage wants to be let in.)

In a direct call-back to the aforementioned ‘Dead Eyes of London’, this crew are orchestrating their devious operation using a rather scary, Victorian girls finishing school as a front. There’s even a Suspiria-esque monster-matron, and Lange is the headmaster. Having realised that they’ve just gone and accidentally killed Der Hexer’s sister for getting too close to their dark secrets though, the gang are one petrified bunch of nogoodniks, as they await his inevitable retribution.

So far, this film is clearly turning out to be far too much fun, and so, with a perfectly timed “guten tag gentlemen”, enter Eddi Arent, all-purpose dispenser of krimi comic relief, this time around playing a kleptomaniac-turned-butler named Archibald Finch.

Fear not though - as irritating as Arent’s initial “oh dear, poor old me, I can’t help but swipe things as soon as people turn their back” routine may be, ‘Der Hexer’ benefits from a relatively thin spread of his comic stylings. For some reason, his character entirely disappears for long stretch in the film’s central half hour, and when he does reappear, he is on his best behaviour, having become a lot more interesting following the revelation that his character has actually been planted in Messer’s hideout as a spy for Der Hexer.

Meanwhile, the film’s count of attractive, self-confident women with mod haircuts is further increased when Der Hexer’s wife (Margot Trooger) arrives in town for her sister-in-law’s funeral (taking place in “London’s central cemetery”, wherever that is). Certain that her husband must be lurking nearby, Fuchsberger is soon in hot pursuit, accompanied by his new partner in the investigation, Inspektor Warren (Siegfried Lowitz), a mercurial retired detective who has returned to Scotland Yard to take advantage of the opportunity to finally apprehend his arch-nemesis.

Whilst hassling Mrs Derr Hexer in a hotel lobby however, Inspektor Higgins also makes the acquaintance of a curious chap named James Wesby (Heinz Drache), an affable Australian crime writer who is also on the trail of Der Hexer, meaning that he often makes a habit of turning up in close proximity to the villain’s nefarious acts. Hmmm, I wonder….

Whilst this rather hum-drum “who’s the baddie?” plotline works itself through however, the film is at pains to ensure we remain sufficiently entertained, throwing in some delightful bits of comic book hijinks on a fairly regular basis.

After an evening spent horsing around in Elise’s flat for instance, Inspektors Higgins and Wilson set off on a frantic rooftop chase, in pursuit of some sinister, black-clad intruder. As smoke billows from dozens of huge, stone chimneys, I almost expected Dick Van Dyke to pop in for a cameo, but more than anything else the imagery harks back to those founding texts of the Euro-pulp aesthetic, Louis Feuillade’s silent-era ‘Fantomas’ and ‘Les Vampires’ serials – a comparison which also springs to mind when we visit the hideout of Messer’s smuggling operation, located beneath a trap door in the dusty, wine-barrel filled storeroom of an old manor house.

Meanwhile, it almost goes without saying by this point that the mysterious black-gloved killer who spends much of this movie creeping around the place throttling people feels like a direct precursor to the conventions of the giallo which would soon take root in Italy’s popular cinema.

(Lest we forget, Mario Bava’s epochal ‘Blood & Black Lace’ came out in the same year as ‘Der Hexer’, and was produced under the assumption that it would be presented to West German audiences as a Wallace film. The murder sequences here certainly bear a passing similarity to the kind of lurid set-pieces Bava would oversee in full colour in his film… although sadly he nixed the submarine.)

In another sign of things to come, ‘Der Hexer’ also dares to get just a little bit more kinky than we might have expected, given it’s year of production. This is largely due to the presence of Sophie Hardy, who appears here in full-on, raging sex kitten mode, even indulging in a salacious shower scene has her revealing some luscious bare back before asking Fuchsberger to dry her off. Lengthy scenes in which the pair fool around (fully clothed) on her bed, drinks in hand, meanwhile are suggestive of a dissolute lifestyle unbecoming of yr average early ‘60s movie hero… especially in view of an earlier, rather edgy, visual gag that revolves around Fuchsberger using the darkroom in his office to develop dirty pictures of his secretary.

Elsewhere, ‘SNAKE KILLS MAN’ reads the billboard behind a super-imposed Trafalgar Square newspaper vendor, foreshadowing another great bit of business which sees a nefarious villain hiding poisonous snakes in the pockets of our heroes’ overcoats whilst they dine at a restaurant.

Other highlights meanwhile include a moody and violent scene in which the policeman guarding the submarine tank after it has been secured by the cops is dragged into the water and knifed by a sinister frogman (shades of both 1965’s krimi-ish gothic horror The Embalmer and actual frogman-related krimi ‘The Inn On The River’ (1962))… and then, there’s the genuinely rather astonishing shot in which we see a grand country house being dynamited (it doesn’t look like a model shot).

A restlessly imaginative director with a distinctly whimsical sense of style, Alfred Vohrer certainly does his utmost to keep things lively here. At certian points, I suspect Vohrer is deliberately having fun with the kind of artificial studio backdrops necessitated by low budget productions; the view from Fuchsberger’s office window for example, rather than stock photo of London, displays some boldly sketched, cartoon-like rooftops, whilst some of the doors and windows in Messer’s office set are clearly painted directly onto the walls. A nice use of budgetary limitations to create an amusing, somewhat post-modern effect, this can also perhaps be observed in shots which see exterior ‘brick’ walls clearly chalked onto flat black set dividers.

Vohrer also employs some amusing business with moving figures being followed through holes in newspapers (in shots taken from the POV of snoopers observing them), and with extreme close ups of said holes being burned in the papers by cigarettes. (If nothing else, this stylistic quirk at least proves that the production went to the trouble of acquiring genuine British newspapers – ‘RESCUE BY SHRIMP BOAT’ is the unlikely headline in the Daily Mail.)

At one point, the director even attempts to top his audacious “POV from interior of mouth as man cleans his teeth” shot from ‘The Dead Eyes of London’, with a shot purportedly taken from inside a rotary telephone as a character dials a number.

(Although the sheer eccentricity of these “impossible POV” experiments remains unique to my knowledge within European pop cinema, you could, at a stretch, perhaps draw a line to Dario Argento’s later fondness for employing “impossible” camera placements – of an admittedly far less ridiculous variety - within his work.)

In spite of all this fun and games however, ‘Der Hexer’ finally flags somewhat in its final act. The story’s Big Plot Twist can be seen coming a mile off, and the decision to go with one of those dreary ‘whodunnit’-style finales in which the cast stand around en masse explaining the finer details of the plot to each other in lieu of any action, is regrettable.

Although it eventually comes up short on the kind of sadistic, baroque and surreal elements which have increasingly endeared krimis to horror fans in recent years though, ‘Der Hexer’ is still a ton of pulpy 60s fun – a richly atmospheric romp which mixes swinging spy movie tropes with exquisitely moody black & white photography, some startling moments of violence and weirdness, a top-line cast of krimi regulars (Klaus Kinski’s absence notwithstanding) and characteristically idiosyncratic and stylish direction from Vohrer.

It’s probably not the film I’d select as an initial introduction to the krimi oeuvre, but if you’ve already “got the bug” with regard these movies and find yourself in the mood for a kooky caper in the vein of Franco’s Attack of the Robots or one of those ‘60s Dr Mabuse movies, ‘Der Hexer’ should do the job nicely. 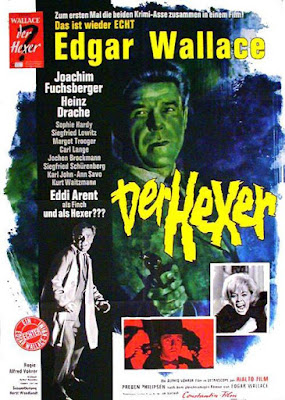 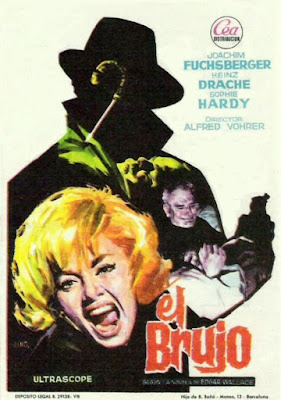 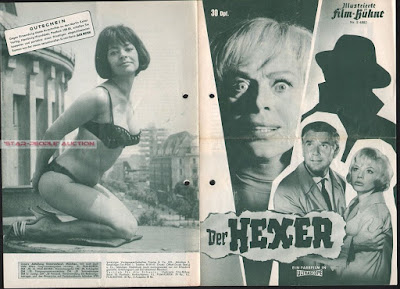