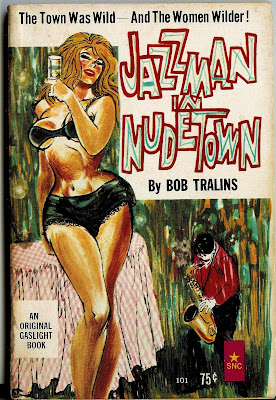 Well, vis a vis my previous post on the subject – I gave in. I went back for it. And furthermore, I’ve read it. Another legend lies dead at my feet, slain by nerdly curiosity and the willingness to spend money on weird junk. 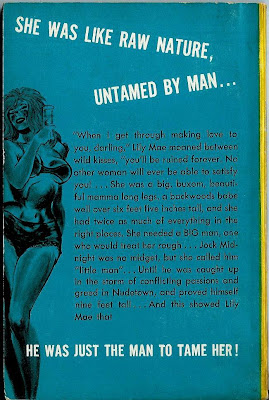 Although I very much enjoyed the book, I’m gonna come right out and say that, sadly, I don’t think that Big Bob Tralins is really the smart, self-aware yukk-meister that various of his titles and cover copy might suggest. The bulk of the prose and plotting in “Jazzman..” is standard issue pulp doggerel, full of long stretches of the kind of autopilot writing that quickly turns to mush on the journey between eyes and brain. I've encountered far worse, but I've certainly read better.

Sadly, the approach to hip culture taken by the book is flat and off-message enough to convey the impression that Big Bob had never actually been without spitting distance of a real life representative of the counterculture. His arsenal of 1964 jazz reference points seems limited to the strictly trad likes of Louis Armstrong and Leadbelly, and in one chapter our beatnik narrator repeatedly refers to a bunch of aggressive rednecks lounging outside a small-town barbers shop as “hep cats” – a glaring error bespeaking a woeful failure to grok the hip vernacular.

BUT, what “Jazzman in Nudetown” may lack in authenticity, it more than makes up for in lively, if sporadic, imagination. The book’s saving grace, the thing that truly raises it to a kind of cracked, outsider poetry, is Tralins’ gloriously unhinged attempt at first person beat narration.

What Bob really seems to have taken on board here is the multitude of possibilities offered to the bored hack writer through the introduction of a free n’ easy beatnik writing style. After all, laying down some sub-Kerouac blather is easy AND fun, and Tralins seizes the opportunity with both hands here, happily throwing out whatever instinctive/alliterative crap boiled up from his noggin with gleeful abandon. Why have your hero drink whisky when he can ‘suck down on woozle juice’? Why have girls when you can have ‘wiggle witches’? And if, like Tralins, you start occasionally producing sentences that just plain make no sense whatsoever, well – cool it pops, this just ain’t your square ‘makes sense’ kinda read, you dig? Big Bob is busting out some first-thought best-thought, and it’s beautiful, man. No redrafting needed.

These outbursts of good-humoured beatitude seem to explode from the book every couple of pages like a transition from black & white into Technicolor, but sadly they become fewer and further between as the novel proceeds, with the good ol’ ‘workmanlike slog’ approach predominating from the halfway point onward. Nevertheless though, some of the best passages in ‘..Nudetown’ are timelessly demented, rendering it essentially reading for any connoisseur of beatsploitation.

So, for the record, “Jazzman in Nudetown” tells the tale of Jock Midnight, erstwhile leader of Jive Midnight and his Jive Cats, a somewhat unconventional clarinet, trombone and hambone percussion trio whose popularity has made Jock a hep-cat supreme back home in California, or so he tells us. But Jock is a long way from home as the book opens, on the lam from a Georgia correctional facility, having been framed by some racist cops who didn’t look kindly on his investigations into the disappearance of his trombone player and best buddy Fat Joe Bullets.

As he stumbles out of the woods, Jock is immediately picked up by one Lilly Mae Tinch, a gigantic, high maintenance nymphomaniac, and her accomplice Phoebe, who offer him a job, prompting the following exchange, which surely deserves a place in the history of spectacularly ill-advised chat-up lines;

--
“How’d you like a job?”
“For money?”
Both girls laughed at my expression. “What else?”
“What kind of job,” I said, locking my gaze with the big blonde’s. “You both look like a couple of sex jobs to me”.
I got away with it. They were swingers, just like I’d figured. Groovy enough to collar the jive without blinking their eyes into question marks.
--

This being a pulp smut novel, Jock’s bold approach to seduction pays swift dividends, and the extraordinary opening to the next chapter bears quoting in full;

--
“I kept feeling the empty giggle bottle under my pillow. That’s what finally woke me up. It wasn’t made to sleep on. It was dawn and the faint rays of the sun were streaming down upon the bed from between the drawn slats of the venetian blinds. I started to get up, but a heavy thigh over my hip held me fast. Lily Mae’s big arms were entwined around my chest from the back, I could feel her breath on the top of my head, and the delicious warmth of those huge breasts against my shoulders. Man! What a way to wake up!

Phoebe was on the other side of me, lying on her stomach, the pillow over her head. The creased and wrinkled sheet covered half of her lush body, exposing flesh from the center of her back in one sweep all the way down to her sleek, rounded hocks. Even in the fresh wash of morning sun she was grooby. Beautifully grooby. A ginch with a figure like a Greek cat in the Louvre with the delicate complexion of bare marble. Feeling no pain.

I never did get around to finding out if Lilly Mae was the fairy lady though. The lack of sleep, the booze, the weariness and fatigue that had been ragtiming after me finally cornered the market on my energy and swamped me. Zazzle! Did I pass out before – or after? No. I smiled at myself, remembering. Old Jock Midnight hadn’t let the girls down. Neither wiggle witch had been disappointed.

Untangling myself from the sleeping blonde boa, I eased myself down to the foot of the bed and got to my feet. I was wobbly, but I made it to the bath. Closing the door, after sloshing cold water on my face I greeted my reflection in the mirror. I looked good, real good. My complexion was as ruddy as a piece of mouldy swiss cheese that had been left in the pantry of an abandoned summer camp for girls. After the mice finished with it. Only difference was, I’d been gadzooked by two swinging cats!”
--

It is Lilly-Mae who leads Jock to ‘Nudetown’, which, disappointingly, is not some chaotic paradise of lecherous vice, but simply our freewheelin’ protagonist’s pet name for ‘Newton’, a depressingly fully-clothed redneck shithole in and around which the rest of our story takes place.

In one of the pleasantly eccentric plot twists that render this book worth reading, it turns out that Lilly Mae is a distant descendent of Blackbeard the pirate, and is seeking to retrieve his long-lost treasure from its hiding place in the Georgia swamplands. What follows is about one hundred pages-worth of crossings and double-crossings and characters being menaced with shotguns, sapped on the head and dumped in swamps, seemingly endless chase scenes and confrontations with redneck cops. Eventually, the whole thing turns into a kind of ham-fisted civil rights-era protest story, as Jock Midnight finds himself incarcerated in Nudetown jail on the basis of his being an obvious “negra-lover”, yelling beatnik-tinged obscenities from his cell window at the villainous pigs who are squaring up against the town’s peace-loving black community in the street outside.

I realise I’m making “Jazzman in Nudetown” sound pretty fantastic here, but really, it isn’t. If Bob Tralins had been able to keep up the pace of the extract quoted above, it would be a stone-cold classic, but as is I think I’d merely deem it a moderately grooby waste of a few hours.

In one of Bob Tralins’ flights of beatnik fancy, he makes metaphorical reference to a “jinky board”, whatever that is. This immediately reminded me of the fictional pulp writer Jack Steinblatt featured in the Daniel Clowes comic “MCMLXVI” (which you can find in the excellent “Caricature” anthology); 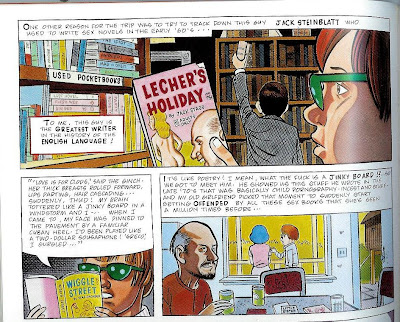 Could Steinblatt be directly based on Tralins? Did Clowes actually plough his way through “Jazzman in Nudetown” at some point? Or were these mysterious “jinky boards” in fact a common element of smut-pulp vocabulary?

If you know the answers to these questions, well… probably best seek help. But let me know first.

Thank you for sacrificing yourself so that we didn't need to. The jinky-board thing and Clowes connection is especially interesting: a Google Book search says that "Jinky board , janky board (cf. Gullah ['cika-bod]) is a name for the seesaw in Berkeley County, South Carolina".

I need to read this!

I thought all you yankees called see-saws "teeter totters"?!