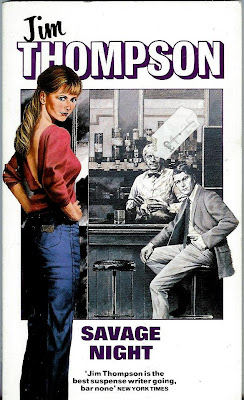 Well I’m not posting this one for the cover, that’s for sure.

In fact, the more I look at this cover illustration, the uglier and stupider it gets – an unhappy reminder of the dark days of the ‘80s when publishers weren’t sure whether to wrap up classic crime books in old-fashioned pulp style, or go for the more upmarket ‘classic books’/noir heritage look that’s predominated in the past few decades, instead going for a thoroughly unsatisfying halfway house approach.

I seem to remember bland, cardboard cut-out characters like these inhabiting the covers of a lot of the books I used to get out of the library as a kid during the '80s. Who the hell are they anyway? They certainly don’t resemble anyone you’ll find in Thompson’s book. The two main female characters in “Savage Night” are the scheming, ex-nightclub singer wife of an alcoholic mob stool pigeon, and an emotionally-scarred maid-servant with a deformed leg. Did the illustrator even bother reading a plot synopsis? At least when cover artists used to make shit up back in the old days, they’d usually make up cool shit. What a drag.

Oh well, I guess all the pill-poppin’ maniacs and long-gone daddies in the illustration game had moved on to churning out eye-boggling VHS covers by the time this edition came out, so we can still enjoy looking at those.

Anyway, I’ve been enjoying (if that’s the right word) a few Jim Thompson books recently. Quotes on the back tend to say things like “read Thompson and take a tour of hell” (The New Republic), and to be honest it’s hard to convey the sheer, unremitting bleakness of his work without resorting to similar hyperbole. Seriously, Nelson Algren and Raymond Chandler were happy-go-lucky funsters compared to this cat.

Or at least, however dark things get in Chandler, we see events through Philip Marlowe’s withering eye – a man of reason, ready to reluctantly clean up the mess, quietly asserting his moral authority in the process. We get no such reassurance from Thompson, who prefers to plunge us straight into the minds of the most lowly and doomed operators he can conjure, all struggling like rats in a trap.

Thompson’s characters are uniformly cruel, brutalised, self-centred, confused and misguided, capable of slitting each other’s throats on the flimsiest pretext. But they’re not villains, or freaks, or drop-outs or psychopaths… at least, not on the surface. They’re guys who might work next to you in dead end jobs, or that you might meet at the bus station, or see killing time at the library. Their world is devoid of the romanticism usually implied by gangster and noir shtick. They all had rough upbringings, they all work hard and do their best, and where does it get them? Fucked, that’s where.

The protagonists of probably Thompson’s best known book “The Grifters” are so screwed up, they never even manage to get a proper crime narrative rolling before they meet their inevitable demise. The characters, the situations, the language, are all those of a crime novel, but when you reach the end you realise you’ve been suckered into reading a study of brutish, existential despair rather than the heist/double-cross yarn you may have been expecting. And somehow we can’t help but want to read more.

I know I’m making it all sound pretty comedically grim, and it is, but the depth Thompson manages to invest in these characters in the space of a 120 page “American groin kick novel” (thanks to Vanity Fair for that one) makes his work absolutely devastating. Really one of the great mid 20th century writers, irrespective of genre, and I look forward to dipping into more of his tales whenever my approach to human nature starts to get a bit too rosy.

I didn’t mean to write quite that much here, because actually this post was supposed to be the first in an occasional thread where I’d post brief illuminating and/or amusing extracts from books I’ve read recently, and keep the commentary to a minimum. Oh well, maybe next time.

Anyway, I thought you all might this rare moment of brevity from “Savage Night”, wherein our "hero" Carl Bigelow lays unable to sleep next to an obnoxious, snoring dame, and thinks back to the time he once hitched a ride with an eccentric pulp novelist…

He was a writer, only he didn’t call himself that. He called himself a hockey peddler. ‘You notice that smell?’ he said, ‘I just got through dumping a load of crap in New York, and I ain’t had time to get fumigated.’ All I could smell was the whiz he’d been drinking. He went on talking, not at all grammatical like you might expect a writer to, and he was funny as hell.

He said he had a farm up in Vermont, and all he grew on it was the more interesting portions of the female anatomy. And he never laughed or cracked a smile, and the way he talked about it he almost made you believe it. ‘I fertilize them with wild goat manure’, he said. ‘The goats are tame to begin with, but they soon go wild. The stench, you know. I feed them on the finest grade grain alcohol, and they have their own private cesspool to bathe in. But nothing does any good. You should see them at night, when they stand on their heads, howling.’

I grinned, wondering why I didn’t give it to him. ‘I didn’t know goats howled,’ I said.
‘They do if they’re wild enough,’ he said.
‘Is that all you grow?’ I said. ‘You don’t have bodies on any of – of those things?’

‘Jesus Christ!’, he turned to me like I’d called him a dirty name. ‘Ain’t I got things tough enough as it is? Even butts and breasts are becoming a drag on the market. About all there’s any demand for anymore is you know what.’ He passed me the bottle, and had a drink himself, and he calmed down a little. ‘Oh, I used to grow other things,’ he said. ‘Bodies. Faces. Eyes. Expressions. Brains. I grew them in a three-dollar-a-week room down on Fourteenth street and I ate aspirin when I couldn’t raise the dough for a hamburger. And every now and then some lordly book publisher would come down and reap my crop and sell it at two fifty a copy, and lo and behold, if I praised him mightily and never suggested that he was a member of the Jukes family in disguise, he would spend three or four dollars on advertising and the sales of the book would swell to a total of nine hundred copies and he would give me ten percent of the proceeds… when he got around to it.’ He spat out the window and took another drink. ‘How about driving a while?’

I slid over him, over behind the wheel, and his hands slid over me. ‘Let’s see the shiv,’ he said.
‘The what?’
‘The pig sticker, the switchblade, the knife, for Christ’s sake. Don’t you understand English? You ain’t a publisher are you?’

I suspect our agrarian friend might have felt more comfortable within the covers of this older edition of “Savage Night”; 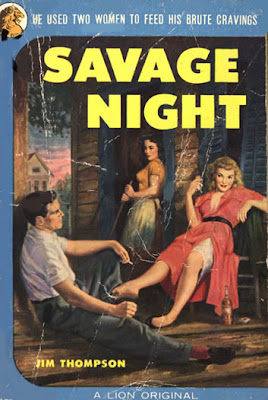 More classic Thompson cover art can be found here. Most of the Lion covers are pretty cheesy, but the Signet editions of “The Getaway” and “Wild Town” are both incredible pieces of work, and make the above ‘80s cover look even more stupefyingly tepid in comparison.

The other thing about Thompson is that, when he wants to be, he can be very, very funny. 'The Killer Inside Me' is a bleak piece of work, but full of black, nasty humour, too.

post the answer on your site or mail me to dillronroy@web.de

a thompson fan myself
thanks & best regards
Roy Dillon