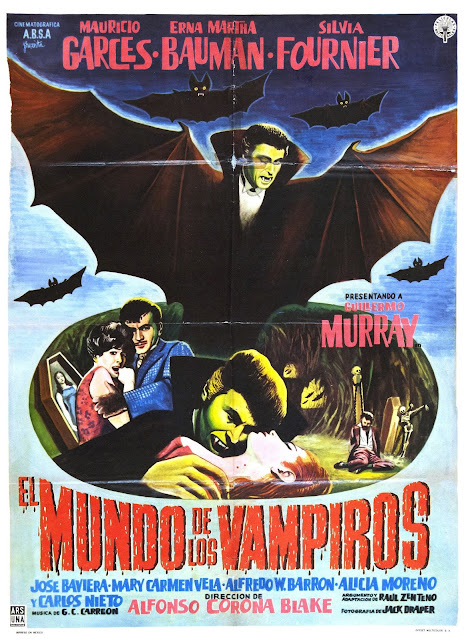 I confess, I get all these ‘50s/’60s Mexican vampire movies a bit confused. There were just so many of them produced in such a short time frame, all with fairly similar titles.

Anyway, now that we’ve got that out of the way – ‘El Mundo de los Vampiros’ rules. It gets straight down to business right from the very first frame, as we see our vampire (Guillermo Murray, looking for all the world like a more fresh-faced, Hispanic Christopher Lee) rising from his tomb (it’s velvet-lined and has an automatic lid - nice). He wears a full opera cape, complete with one of those massive, upturned bat wing collars that only movie vampires (and Dr Strange) ever wear, and a huge silver amulet. (1)

Leaving his crypt, the vampire wonders through his splendidly cob-webbed dining room, before descending to the gigantic subterranean cavern beneath his house. Mouldering skeletons hang in chains from the walls, alongside some even more impressive cobwebs. The stone entranceway to the cavern has been crudely carved to resemble a mouth full of fangs, and beyond it, a pair of blazing stone braziers are decorated with human skulls on each corner, standing before a classic sacrificial altar. Naturally, the flames shoot upward when he gestures toward them with his cape.

After taking a few moments to admire the majesty of his interior décor, he moves on to – joy of joys – a full size pipe organ crafted entirely from hollowed out bones and skulls! Man, this is a vampire who knows how to live!

If you look this film up on IMDB, and you’ll immediately find reviewers deriding it as a “cheap Mexican vampire flick” and such like, but bugger that – this bone-organ is one of the most elaborate props I’ve ever seen in a ‘60s horror film. It must have taken somebody weeks to build this thing, and it is absolutely incredible. 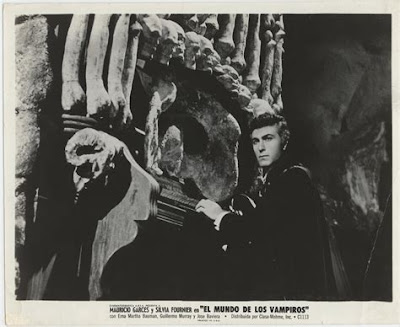 As the vampire seats himself herself the keyboard and starts to lay down some dark, dissonant dirges, a brief cut away takes us above ground, to a desolate looking wilderness, in which a young couple are driving around in a land rover, having apparently lost their way.

Seemingly manifesting via some kind of underground gas jet, the vampire appears in the middle of the road, accompanied by a crowd of surprisingly effective animated bats. “Why doesn’t he move aside?”, the wife asks optimistically after her husband sounds the horn, but it is too late. Grinning, the vampire reveals fangs the size and shape of baby carrots. The woman screams, and before you know it, we’re back downstairs in the cavern, where The Count continues to work through some remarkably uncompromising modernist organ jams.

Acknowledging their presence, the Head Vampire shrieks in the voice of a hissing cat, before returning to his music. His followers meanwhile begin preparations for some black magick rite, bringing goblets and a dagger to the altar, before a gaggle of Vampire Brides (recognisable by their diaphanous gowns and ridiculously OTT eye make-up, seemingly modelled on Carroll Borland’s get-up in Tod Browning’s ‘Mark of the Vampire’ (1935)) make their entrance, dragging the hypnotised wife of the kidnapped couple. Her protesting husband meanwhile is chained to a stake, whilst the follower vampires chew on his neck en masse.

The sacrifice, it transpires, is to be offered to Astraroth, “the evil spirit whom all of us here have come to adore”. Before doing the deed however, the Head Vampire pauses to reflect that “..with this dagger, I was murdered more than one hundred years ago, by a man who carried the cursed name of… Colman!”

Since then it seems, our vampire has dedicated his time to tracking down and destroying the remaining members of the accursed Colman dynasty – and yes, hearing him spit the rather mundane name of Colman with great vehemence and repulsion throughout this film proves very amusing.

You’d think wiping out a single bloodline over the course of a century would be easy work for such a ferocious Lord of the Undead, but he must have been slacking off a bit, because three Colmans remain extant – a father and two daughters. Using the hypnotised bride on the altar as a kind of human scrying orb, he establishes that they are all alive and well. Quoth the Vampire; “..as long as they refuse to join the legion of the living dead, I will not be able to give the signal which will launch the conquest of the universe!” (And you’d better believe that sounds pretty impressive when solemnly intoned in Spanish).

Eventually, after giving her neck a good, erotically-charged chew, the Head Vampire plunges his dagger into the neck of the sacrificial victim, but, instead of dying, his bite revives her as one of the evil brides! Her outré eye make up is already in place, and she turns to the camera and cackles in wild and uninhibited fashion.

By this point, we are over fifteen minutes into the film, and, perhaps sensing that the monster kids in the audience probably need a break from all this blood-curdling brilliance before their little hearts expire, ‘El Mundo de los Vampiros’ takes a deep breath, and reluctantly cuts to the ‘good guys’.

Now, I’ve seen enough Mexican horror films to realise that, when we cut to the good guys, it’s generally time to put the kettle on or visit the bathroom. Although such tedium is, in fairness, a tradition that stretches all the way back to Bram Stoker, these stiffly formal scenes in which well-to-do gentlemen pay effusive compliments to each other and chivalrously praise the beauty and achievement of the film’s soon-to-be-betrothed young ladies seem to be a particular blight upon Mexico’s contributions to horror cinema.

Even here though, ‘El Mundo de los Vampiros’ manages to liven things up a bit, investing it’s inevitable post-dinner party hand-shaking with an element of intriguing weirdness almost equivalent to the extraordinary scenes which have preceded it.

We are at a soiree held, of course, by the refined Senor Colman and his two eligible daughters, and this evening they are joined by an esteemed guest who has recently returned from ‘the capital’ – the handsome musical prodigy Rodolfo Sabre (Mauricio Garcés), who is of course urged to take a turn at the piano. (2)

Rodolfo demures, explaining that his hosts would not enjoy the kind of music he plays these days. “One could say that I study the science of music, in a way – the effect of sound on living beings […] sound can kill an animal, or a human being, or make them insane,” he helpfully explains.

Persuaded to play an example of this daring new music, he sits at the keyboard and knocks out some mildly dissonant, minor key romantic melodies. Dogs outside howl, one guest feels her spirit lift from her body, and another is reminded of the death of her mother. “This music contains elements that are aggressive, humourous, religious and terrifying, it produces an effect on all types of being,” Rodolfo tells his listeners.

He furthermore claims that the music he is playing originates in Transylvania, where it is used to “summon the dead” - and, right on cue, the Head Vampire appears in the doorway, his entrance accompanied by a brief orchestral fanfare that causes everyone to stand to attention.

Adopting the conventional “hey, I’m an eccentric Eastern European aristocrat who just moved to the neighbourhood, what’s up?” approach, Count Subotoi (for that is his human name) introduces himself to the assembled guests, but soon causes a scene when Rodolfo’s sinister music causes him to freak out (as he desperately tried to prevent his fangs from protruding from his lips, we presume), precipitating his hasty departure.

From this point onward, it must be said that the film begins to drag somewhat, as it proceeds along a fairly conventional vampire movie trajectory. As such, the vampire begins the laborious process of seducing the young ladies of the Colman household, mooning outside their windows, gaining entry and neck access in the form of a bat and eventually spiriting them off to his lair, all in the tried and tested manner.

One weakness that emerges once the full-strength craziness of the film’s opening act eases off is that, whilst Guillermo Murray clearly looks the part, he does not actually make for a very charismatic vampire. In this regard, it is worth noting that ‘El Mundo..’ was the first ABSA vampire film not to feature Mexico’s best known vampire actor, Germán Robles, who by this stage seems to have moved on to a bunch of rival vampire films from other production companies.

Could we thus chalk Murray up as Mexico’s equivalent of Mike Raven..? He has a bit of that bland, “unconvincing understudy” vibe about him, but the film is otherwise so strong, and his character so blessed his outrageous, comic book action to perform, that this deficiency doesn’t make much of a dent in the overall quality.

Anyway - naturally the steadfast gentlemen of the picture gradually figure out what The Count is up to and set out to stop him and reclaim their women, etc. One thing I thought was a bit odd in this respect is that, although Rodolfo’s Transylvanian music is supposed to ‘summon’ vampires, it appears in practice to have the opposite effect of freaking them out and making them grasp their heads and writhe about in pain… so I’m not sure what that’s all about. Just a sub-titling error perhaps?

As per Mexican monster movie tradition, ‘El Mundo..’ rallies significantly after its saggy middle section, mustering it’s forces for a great, action packed finale that is easily a match for the extraordinary opening outlined in detail above.

Yet another exciting feature of Count Subotoi’s vampire lair is his impressively huge and deep PIT OF SPIKES, and this gets plenty of play in the final act, including extensive use of a rather splendid, Bava-esque forced perspective shot taken from the bottom of the pit.

Needless to say, there is much fun to be had here with Rodolfo and Senor Colman punching vampires in the face, leaping across chasms etc, all leading up to a denouement in which… well, if you’ve read this review and can’t guess the nature by which our heroes nullify vampires evil power, you’ll probably enjoy the movie even more than I did.

I don’t have much more to say in conclusion, except to note that it saddens me to note how neglected and unfairly derided these vintage South of the Border horror films continue to be in the English speaking world. Though their uneven mixture of classic gothic atmosphere and loony monster bash thrills might not be to everyone’s taste, there is a whole world here that remains more or less invisible in terms of officially-sanctioned, English-friendly releases. Digging into it through, er, other means however reveals a seemingly unending supply of films that, like ‘El Mundo de los Vampiros’, are more fun than the proverbial barrel of monkeys. 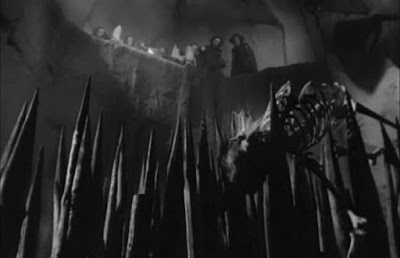 (1) Murray played another vampire in 1963’s ‘La Huella Macabra’ (“The Sinister Footprint”?), before going to on to what I’m sure was sterling work in ‘Neutron Traps the Invisible Killers’ (1965), ‘Planet of the Female Invaders’ and ‘Gigantes Planetarios’ (both ’66). God bless Mexico in the 1960s.

(2) Another Mexican horror veteran, Mauricio Garcés also appeared in ‘La Llorona’ (‘The Crying Woman’, 1961) and the fantastic ‘El Barón del Terror’ (aka ‘The Brainiac’, 1962), amongst other Salazer/ABSA productions.