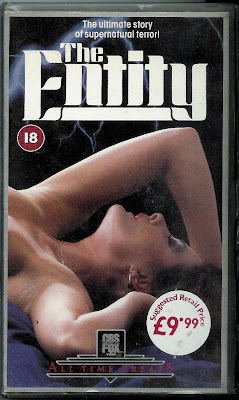 PRICE PAID: I think this was my third pick in a “three tapes for £5” deal, along with two films I actually wanted to watch.

THE BOX SAYS: “’The Entity’ is the ultimate story of supernatural terror. It is based on events which actually took place in California in 1976. Only the names have been changed. The facts remain unaltered…”

You won’t be surprised to learn that certain corners of my DVD collection can tend to attract worried/disapproving looks from guests (damned squares). Beyond the eye-catching glare of such wholesome and artistically defensible titles as “Hatchet For The Honeymoon”, “Rape Of The Vampire” and “Female Prisoner Scorpion: Beast Stable” though, it is this innocent-looking ex-rental VHS that I would single out as probably the most genuinely distasteful film I own.

Created and marketed as an earnest ‘based on a true story’ paranormal drama in the vein of “Close Encounters..” or “Poltergeist”, it seems like “The Entity” was a fairly big release for 20th Century Fox back in 1982. Subsequently, I can only imagine it was met with an awkward silence and immediately filed under ‘let us never speak of it again’, as Hollywood moved on with its relentless early ‘80s profit drive.

Perhaps by necessity, the video box is spectacularly vague about the events of the movie within, but let’s get our facts straight from the start: “The Entity” is a film about a young single mother (Barbara Hershey) who finds herself being frequently raped by an invisible ghost/demon.

I suppose in the right hands this premise might have been turned into an interesting and challenging film, and in the *completely* wrong hands (paging Senor Franco), it may at least have been a bracing bit of lunatic erotica, but as it is, TV director Sidney Furie’s blunt and uneven approach to the material results in a real worst case scenario – a boring, sub-Spielbergian exercise in middle-brow ‘seriousness’ mixed with jarring lurches into grotesquely inappropriate sleaze so misguided it’s hard to believe this flick was ever green-lighted by a major studio.

So, for the most part, we get to know Hershey’s character Carla on the basis of her difficult and lonely life history, and the hardships she faces bringing up her two kids-from-previous-relationships on her own, while her current truck-drivin’ partner stays away from home for long periods of time. Pure TV movie stuff. We get to see some eerie ‘stuff-movin’-around-on-its-own-etc’ ‘80s paranormal phenomena antics, and some “sigh, my hair’s a mess but I’ve got to do the dishes” stuff, and we get to see a lot more than we can really be bothered with of the fraught relationship Carla develops with her psychoanalyst Ron Silver. Doing a tedious sub-Al Pacino ‘intense’ turn, Silver is cynical and patronising about Carla’s claims of supernatural shenanigans, and also wants to get into her pants, but y’know, in a ‘good’ “I’m worried about you Carla” sorta way.

So there’s all that. And then there are the rape scenes, which are framed like special effects showcases for Terminator guy Stan Winston, and feature leering, totally unnecessary showering/stripping footage and horrid tit/ass insert shots using obvious body doubles. Seriously – I cannot overestimate how flat-out WRONG these scenes are. I guess they’re not overly explicit or cruel in the way that a ‘70s trash-horror flick might be, but thrown here into the middle of a doggedly serious, supposedly-realist drama and presented as if they should be ‘entertaining’ sequences akin to UFO or ghost stuff in other paranormal type films of the same era, they’re borderline unwatchable.

Like most unintentionally sickening sequences in bad movies, it’s all to do with context and tone. Obviously I can happily waste a Friday night chuckling my way through as much freaky satanic blood-letting as my unwatched-movie-pile can throw at me, but… you don’t know how much I wish I could go back and UNwatch the ‘ghostly latex breast fondling’ shot from “The Entity”.. it’s just – URGH, y’know?

I guess by making these sequences so comparatively extreme, the filmmakers were hoping to imbue the movie with some kind of catharsis for viewers, and to draw some connection with the traumas of actual sexual abuse, or something. But by launching headfirst into failed attempts at softcore titillation at the same time, they manage to completely ruin whatever point they trying to make, to the extent that it’s hard to imagine anyone who’s had any experience of dealing with these issues in their life being anything other than bored and offended by this crap.

Most jaw-dropping of all though is the ending, in which…. well, first off, how would you expect a film like this to end? I mean, after Hershey’s character has rejected both psychoanalysis and the intervention of nerdy paranormal researchers in trying to help her get rid of her invisible molester..? You’d kind of imagine she might perhaps reach some grand understanding about standing up for herself and feeling confident in her own skin etc. and tell ol’ mr.demon to just EFF OFF AND LEAVE HER ALONE, cue contrived happy ending, right…?

Well, yeah. Unfortunately though, this is a ‘based on a true story’ flick, and at the time of filming it seems the real life lady in question had reached no such understanding as regards her, uh, affliction. So basically, we see Carla arrive back at her suburban home for the first time after a climatic failed attempt by the paranormal dudes to freeze her attacker with liquid nitrogen(!?). The front door opens before her, and the grizzly ghost-voice of the demon rapist welcomes her home. She just shrugs, like “oh well, whatever, if you can’t beat ‘em..”, steps inside, and…. roll credits.

The sole saving grace of “The Entity” as a serious film might have been the story’s potential to provide insight into, and offer a positive message to, people forced to live within less supernatural abusive households…. and then they go and end it like that. Words fail me.

According to the final ‘what happened next’ caption card, Carla’s real life equivalent had indeed decided to just sorta put up with the ‘attacks’ as best she could, moving her family to a new town whenever the publicity surrounding her case began to get out of hand. I can’t quite bring myself to bother investigating what happened to her subsequently, but I’d imagine having a sleazy, unsympathetic Hollywood movie made out of her story must have really helped with that. Good work, Sidney. Good work, everyone.

I don’t remember precisely, but I did enjoy the bit where a panel of top psychiatrists (all smoking like chimneys) gather to discuss Carla’s condition, and the chief psychiatrist finishes reading up on her sexual history and comes out with something like; “well it’s obvious, isn’t it? Look at her previous lovers – an old geezer and some kid who didn’t know what he was doing. Now she’s got herself a real man [in reference to truck-drivin’ boyfriend], and she just can’t handle it!” – Wow, therapy sessions with that guy must be a blast!

saw this again recently... thought it was really good... oddly serious... and not what i remember at all... maybe all the creepy body horror bits got me first time around...