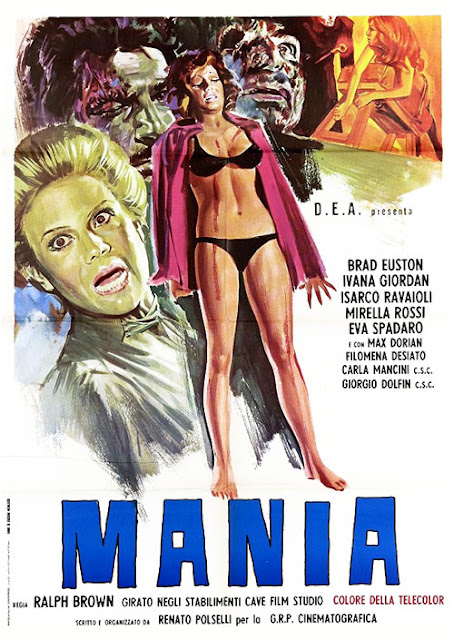 Until recently, this 1974 feature from the infamous Renato Polselli – director of ‘The Reincarnation of Isobel’/‘Black Magic Rites’ (1973), ‘Delirium’ (1972) and The Vampire and The Ballerina (1960) – was considered a lost film, with the director himself reportedly claiming that all materials related to the production had been seized by an irate distributor following its (minimal) theatrical release, their fate unknown.

No sightings, screenings, bootlegs or even verifiable rumours regarding the film’s survival leaked out over the next four decades, leaving Euro-cult devotees with little proof that ‘Mania’ had ever existed at all, beyond a poster and a tantalising, battered trailer.

This all changed however in September last year, when, out of the blue, some wonderful, anonymous person posted the entire movie on Youtube, in the form of a rough VHS rip with the opening and end credits removed, seemingly produced as a TV broadcast master at some point in time. Shortly thereafter, the Youtube upload disappeared, but, even more mysteriously, it was subsequently replaced by a much better copy of the film (now with credits), apparently sourced from a film print.

A wave of giddy excitement swept through the dark corners of the messageboard/social media landscape where such things hold currency, and verily, files were ripped, subs translated, uploads uploaded, and the genie was out of the bottle for good. Safely stowed away for posterity on the hard drives of weird film collectors across the globe, ‘Mania’ is lost no more.

Leaving aside the heart-warming tale of its rediscovery however, the good news here is that, whilst it can’t compete with the aforementioned high watermarks in Polselli’s filmography, ‘Mania’ still more than lives up to its name, proving a valuable addition to the extant filmography of one of Italian genre cinema’s most notorious wildmen.

Clearly completed at great speed on a budget that would have made even Franco or Rollin blanch, and populated with a cast of performers unknown to even the most dedicated Euro-cult buffs, ‘Mania’ is utter bottom-of-the-barrel, moving Fumetti kitsch, but cut through with a heavy dose of vicious lunacy. It may not be “good” in any sense of the word, but it’s certainly crazy. Like most of Polselli’s ‘70s films, watching it feels a bit like snorting some unidentified substance at a party and really wishing you hadn’t.

This is particularly true of the opening fifteen minutes, which are rushed through with the impatience of a twitchy lunatic, as we follow an extremely overwrought conversation between a couple (Lailo, played by Iscaro Ravaioli who once appeared as a henchman in Bava’s ‘Danger! Diabolik’, and Lisa, played by Eva Spadaro, who, like most of the cast here, only ever appeared in other Renato Polselli films), who are busy yelling at each other as their car careers dangerously along a cliff top highway at night. Between hysterical bursts of self-pitying infective, Lisa narrates a portion of her personal history, which unfolds before us in flashback.

It seems that Lisa, who sports a cropped, bleach blonde look in the ‘present day’ footage, used to possess a magnificent bouffant, and used to be married to a mad scientist named Brecht, who lived in a crumbling villa somewhere.

Brecht has a moustache worthy of a Bollywood villain, and appears to have a smoking cement mixer in the centre of his basement laboratory, as well as an inordinate fondness for silver foil and bubble-wrap. He claims that he can “control living matter” and “stop a bee in mid-flight”, but he can exercise no such control over his woman, as is made clear when Lisa begins a torrid affair with his identical twin brother(?!), instigated “out of rage” as a means of “insulting his love”, according to the film’s fan-subs.

Following the lead of Brecht’s moustache, the inter-character scenes here have all the subtlety of a Bollywood melodrama, and things head toward craziness more or less straight away, as, warned by the beautiful housemaid Erina (Mirella Rossi) of his wife’s dalliance, Brecht needlessly kills her (the maid, that is) for pretty much no reason whatsoever, suffocating her with a plastic bag in rather sickening fashion… only, wait, hang on, apparently she’s not dead, she’s merely been “reduced to a deaf and dumb mute” by the experience, it says here.

Shortly thereafter, Brecht’s lab explodes into flames, and Lisa, who holds the keys to the locked gates, takes exultant pleasure in watching her husband burned to death as his brother (whom she claims to love) tries desperately to save him. This woman is going to be our heroine for the next seventy minutes, ladies and gentlemen, so put that in yr “the protagonist must be sympathetic” pipe and smoke it.

Back in the present day framing narrative meanwhile, Lisa and Lailo find themselves chased and attacked by a driverless “ghost car”, which Lisa claims is under the control of Brecht’s vengeful spirit, and, so, yeah… it’s going to be one of THOSE films, isn’t it?

Thereafter however, things do calm down considerably, as present day Lisa returns to her husband’s old villa, where, so her tough-love psychiatrist insists, she must confront her fears and overcome them, lest she fall victim to insanity.

Upon her arrival however, she seems liable to fall victim to far worse than that, as it seems Brecht’s now disfigured and wheelchair-bound brother and the now-barely-clothed mute maid-servant are running the joint like a goddamn house of horrors, carrying on about how Il Professori lives on after his physical death, and so forth.

Although ‘Mania’ is entirely lacking in usual visual trappings of gothic horror (presumably for budgetary reasons), the eventual storyline, once it settles down after the deranged opening, is very much in keeping with over-heated Italian gothic psychodramas of yesteryear.

Films such as The Whip & The Body, Nightmare Castle, and, in particular, Riccardo Freda’s ‘The Ghost’ would all seem to be valid reference points here, and for a good long while through its middle section ‘Mania’ essentially functions as a villa-bound, unreliable-narrator-in-peril ghost story, replete with muddy footsteps on the balcony, faces at the window, hands looming out of darkness etc. (Frequent cut away shots of trees shaking in the breeze meanwhile seem a direct call back to Polselli’s own early gothic, ‘The Vampire & The Ballerina’.)

Events pile up with the strained logic of a nightmare, as if scenes were pieced together entirely at random in post-production, whilst, at all times, the characters remain so hysterical they’re practically on the verge of strangling each other, their actions and reactions baring only to most distant resemble to those of actual human beings.

Although the idea of any of these characters enjoying a Sapphic relationship is never really addressed at any other point in the film, the idea of these two strangely physically/mentally afflicted maids running around in their skimpy night shirts and occasionally scratching each other up in jealousy has a bizarre, pervo Jess Franco kind of vibe to it, and Polselli’s disinclination to exploit this further seem rather curious, given the outrageous content that dominates most of his ‘70s output.*

‘Mania’s music meanwhile is credited to one Umberto Cannone (published by the amusingly named Edizioni Musicali Tickle) and, during the first half of the film, he provides us with an appropriately assaultive palette of bongos, distorted synths, crazy sci-fi effects and bursts of funereal organ.

Towards the end however, a tell-tale Bruno Nicolai-style freakbeat groove takes over, and, by the time Katia is shown making a phone call to Lailo at his home and speaking to him there whilst he is simultaneously lurking about in the villa’s gardens, any remaining pretence at logical storytelling is left far behind as the various characters proceed to chase around and attack each other in various states of rage, fear and confusion for the remainder of the run-time.

Before you know it, Lisa has been trapped in a net(!) and menaced with what look like eels (?!), whilst poor old Erina suffers a gruelling assault by wheelchair, and things get more and more out-to-lunch as we head toward a final 15 minute stretch that’s just as much of a disorientating riot as the opening.

Essentially resembling a ‘60s gothic that has smoked a big pile of ‘70s and gone berserk, ‘Mania’ does suffer from both its obvious budgetary limitations and a fair share of repetitious padding, but if doesn’t quite live up to the brain-melting freak-outs of ‘Delirium’ or ‘Black Magic Rites’, never mind. Those movies set a pretty high bar for such things, after all.

Even as their scrawny, underfed cousin, ‘Mania’ still manages to propel itself into a realm of trash cinema dementia that is more or less beyond criticism, beyond sanity, and quite possibly beyond good and evil too – a finely cracked addition to its creator’s marginal but uniquely twisted legacy. If you’ve yet to sample its pleasures then reach out to the torrents and the .rars my brethren, and drink it in.

* Although I’ve not seen a copy myself (ahem), I am informed that a photo-novel based on ‘Mania’, published in Italy’s ‘Cinesex’ magazine, provides evidence that the film may once have featured far more extensive sexual content than is seen in the currently extant print, so… make of that what you will, as I don’t suppose clarification will be forthcoming any time soon.