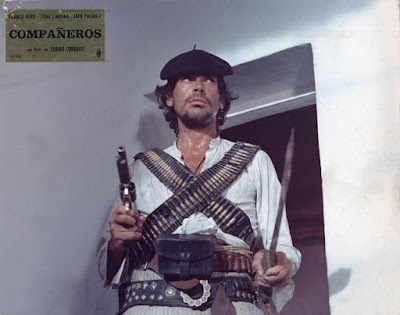 We at Breakfast In The Ruins were greatly saddened today to hear of the death of Tomas Milian, the Cuban-born actor whose unforgettable, off-the-leash performances enlivened dozens of Italian movies through the ’60, ‘70s and beyond.

Milian’s irascible energy and man-child capering often render him a borderline insufferable screen presence – indeed, I’ve avoided seeking out any of the more broadly comic films that were built around his star persona from the mid/late ‘70s onward for precisely that reason. But, when he had a good director, a good script or good co-stars to lock horns with, he was capable of turning it some of the most intense and committed performances found anywhere in genre cinema, whether essaying wide-eyed innocents, fevered psychopaths or – his particular speciality – a variety of unsettling combinations of the two.

A larger than life physical performer who seemed to end up dominating any movie he appeared in, it’s always a joy to see Milian almost literally bouncing off the more stoic, conventional action stars he was often paired with (Lee Van Cleef or Henry Silva for example), just as it’s great to see him constantly imbuing characters who must have been fairly bland as paper with a sense of raw, working class desperation that never feels anything less than wholly authentic.

A roll-call of the most notable movies he appeared in speaks for itself, and it’s safe to say that not one of them would be as well-remembered or well-regarded as it is today without his contribution;

(As an aside, I’m faintly astonished to discover today how old Milian actually was; that he was still able to convincingly play these kind of out-of-control street punk roles in his early forties is remarkable.)

Interestingly, outside of his stardom in Italy, Milian also played a wide range of character roles in American films over the years, ranging from playing Raphael in ‘The Agony and the Ecstasy’ (1965) to later parts in the likes of ‘JFK’ and ‘Traffic’. He also turned up rather unexpectedly in Dennis Hopper’s ‘The Last Movie’ in 1971. But regardless – it’s as a beady-eyed, sweat-soaked, gun-toting wild man wreaking death-defying havoc through the streets of urban Italy or the deserts of Almeria that most of us remember him – R.I.P.

Unfortunately, circumstances dictate that this Saturday night is not movie night in our home, but I’ll be getting a Milian marathon pencilled in for next weekend, and if anyone objects, I’ll pay tribute to the great man by shouting and screaming, tearing my shirt and going loco with a fruit knife (not really). 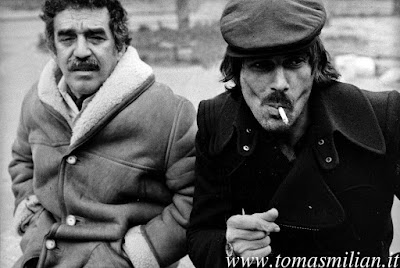 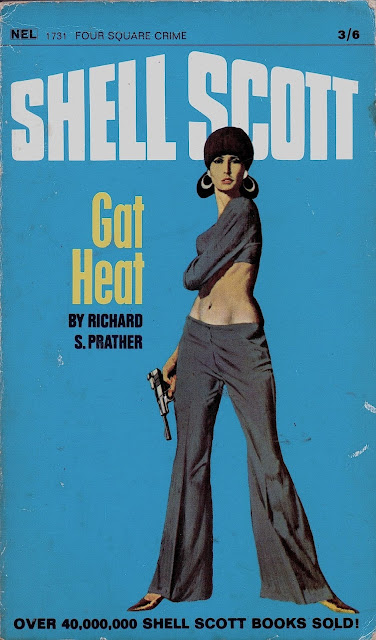 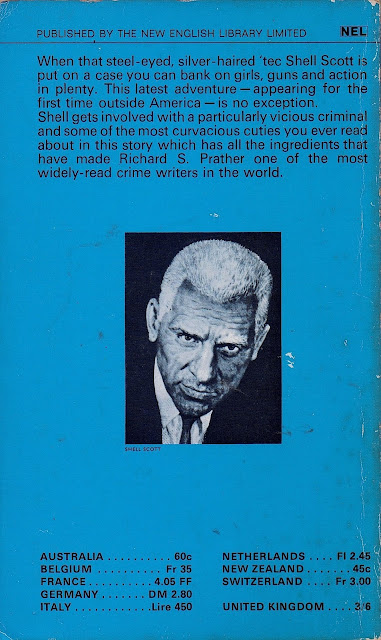 Until recently, I’d never read a novel by Richard S. Prather all the way through, yet I own more of his books than most authors I actually like. Don’t ask me why – I mean, usually even the cover art isn’t much good (although I’ll make an exception for this one).

On reflection, I think it must be Prather’s gift for titles that keeps me parting with (extremely small amounts of) cash to add to my pointless collection of his work. Whilst I’ve still not acquired a copy of his hopefully beatnik-themed masterwork ‘Dig That Crazy Grave’, I could easily rattle off a top ten awesome/absurd monikers from the Prather canon, and it is this aspect of his career that I aim to primarily highlight in this new series of posts.

Though not as mirth-inducing or psychotic as some of his titles, ‘Gat Heat’ is a sublime bit of gutter pulp nomenclature that might well make it into my top five, and it was probably that, plus the rather unique aspect of the hip-hugger clad dame featured on the cover, that led me to pull this one off the shelf when, bolstered by the realisation that Prather is actually rated rather favourably in certain circles of vintage crime fiction fandom, I determined to finally actually sit down and read one of these damn things front to back.

And so, the verdict. Well, in short, Prather strikes me (on the basis of this novel at least) as a talented writer who was fully aware he was cranking out trash, and happy to let his standards slip accordingly.

His writing does often have bit of a raw, weird post-Cheney/Spillane punch to it, leavened with a hefty dose of goofball humour, and, at his best, he is capable of crafting bits of prose that read like extended strings of irresistible exploitation movie poster tag-lines. This is perfectly exemplified by chapter # 2 of ‘Gat Heat’, which begins with the immortal line;

“They were all naked. It was that kind of party. Even the dead guy was naked.”

And if at that point you don’t feel compelled to immediately cease whatever else you’re doing read on, you’re a better man than I.

Sadly though, such zingers become fewer and further between as the disappointingly linear blackmail storyline grinds into gear, and, once the novel’s beguiling setting – a delicious world of pre-Manson Hollywood decadence, ripe with wife-swapping parties, gaudy condos and brightly hued Cadillacs – has been satisfactorily established, it soon becomes a bit of a plod, despite Prather’s admirable efforts re: piling up blood-thirsty violence, extravagantly lecherous descriptions of scantily-clad dames and miscellaneous crazy, high octane shenanigans to beat the band.

(Clearly already geared up for the ‘70s, ‘Gat Heat’ actually reads like a 50/50 transition between an old-fashioned private eye mystery and one of the action-orientated ‘Men’s Adventure’ titles that would soon begin to take their place in the new decade.)

I’m not sure quite why I remained so unmoved by all this, given that I’m usually pretty happy with so-so pulpy private eye yarns, but what really bugged me I think is Shell Scott himself. Generally portrayed rather unappealingly on the covers of these books as a leering, albino buzzcut-sporting psychopath, Scott is a character who combines the blunt thuggery of Spillane’s Mike Hammer with the wise-cracking, womanising patter of yr average smirking Euro-Spy protagonist, and as such he tends to emerge as an almost insufferably smug narrator.

Whilst some of Scott’s habits (retrospectively assessing the quality of each punch he delivers to a crook’s jaw and ruing the circumstances that denied him a better performance, for instance) are quite endearing, others are decidedly less so (I hope he doesn’t go through all these books referring to women as “juicy tomatoes”, because it gets old pretty quick).

The most essential problem here though is that Scott – and by extension, the story he narrates – simply lacks the sense of moral ambiguity found at the heart of all the best P.I. tales.

From Sam Spade to Lemmy Caution to Lew Archer – they all inhabit a treacherous moral universe in which the slippery relationship between crime, the law and their own uneasy position as a reluctant conduit between the two is forever uncertain; corruption is ever-present, and questions of a given action’s justification ever unanswered. That’s the way these stories work, and it is a large part of what allows them to remain so compelling.

Take that away, and you’re left with, well… Shell Scott – a self-righteous bore whose delusions of self-determination fail to mask his more apparent function as a sadistic stooge for the established order. Every cop he meets is salt of the earth, an A-1 guy with a great sense of humour, whilst the ‘hoods’ he tangles with are diminutive, goblin-like hoodlums left over from the 1930s, who can’t pronounce ‘th’ sounds and have names like ‘Bingo’ and ‘Gippo’. Not much scope for ambiguity there.

Whilst Prather is careful not to put such dialogue directly into the mouths of his police characters, Scott speaks for his cop buddies when – ala ‘Dirty Harry’ a few years later – he repeatedly curses out the pen-pushers in the Supreme Court who won’t even let him give these crooks a well-deserved beating upon arrest, and decries the system that demands he must go through the absurd farrago of actually obtaining evidence against his suspects and letting them call their swanky lawyers, rather than just, say, shooting them.

Of course, given that nobody is reading ‘Gat Heat’ for the sake of court room intrigue, Shell Scott does end up shooting most of them, but in an off-hand, self-satisfied manner that can’t kind help but leave a bad taste in the mouth, as he blunders on towards his next comedic encounter with a bikini-clad ‘tomato’.

Of course you might say I’m expecting far too much of a light-hearted, read-in-one-sitting bit of pulp hoo-hah, and this reactionary take on the genre certainly has its precedents (I don’t recall Mike Hammer being haunted by too much moral uncertainty as he bashed villains’ teeth down their throats). But still, I dunno… arch and self-aware as Prather’s style may be, he essentially seems like a smart guy, so would it have killed him to have approached this tale of blackmail, multiple murder and sexual deceit with just a *touch* of the gravitas such topics entail, in between all the yukks..?

Anyway, more to the point, the artwork on the front of this one is pretty cool. It turns out the illustration is actually by Robert McGinnis, re-purposed by New English Library from the 1967 Carter Brown number pictured below. (I thought I detected a McGinnis-y look in the folds of her flares and contours of her belly, but wasn’t 100% sure.)

As of 1968, the ubiquitous exaggerated sales figures thrown around by all of Prather’s publishers had apparently reached the not unimpressive count of forty million, and NEL’s back cover blurb hedges its bets with a couple of paragraphs that could have been applied to literally any Shell Scott story, suggesting that perhaps they were just as reluctant to read these books as your correspondent.

More fun with the “steel-eyed, sliver-haired ‘tec” coming soon to these pages, potentially. 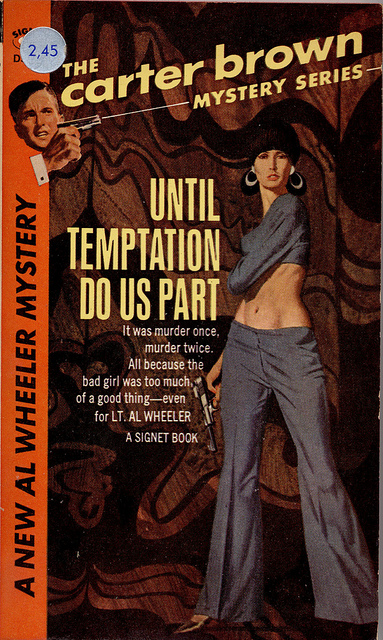 Nikkatsu Trailer Theatre # 5:
WE SELL OUR BODIES
BUT NOT OUR SOULS!

Well if my gushing praise in last week’s Seijun Suzuki memorial post wasn’t enough to sell you on 1964’s ‘Gate of Flesh’, perhaps the typically hyperbolic outpourings of Nikkastu’s trailer department will do the trick?

Leaving aside a few meaningless and/or questionably translated exclamations and a some inevitable come-ons to the presumed-to-be-male audience however, I think this lean two and a half minutes actually does a pretty good job of conveying the power of Suzuki’s film, in visual terms at least. (It would have been nice to see a bit more of Takeo Kimura’s extraordinary sets, but, never mind – something tells this film’s original viewing public weren’t putting down their yen at the ticket booth for the sake of the set design.)

According to Suzuki, the film’s female stars were mostly drawn from outside the studio’s usual roster of contract players, as the Nikkatsu actresses were understandably unwilling to engage with such risqué material. With aching predictability, the women are all ranked below both Jo Shishido and Koji Wada (who makes almost no impression at all) on ‘Gate of Flesh’s official cast list, but it should be noted that their performances are excellent across the board. They’re all tops in my book.

We should also note the presence here of Chico Roland – Japanese cinema’s go-to guy for black American roles – appearing in a cameo as a U.S. Army chaplain. Last seen around these parts in 1968’s Genocide, Roland is always an extraordinary presence. Constantly on the verge of breaking into hysterics whenever he is on-screen, and seemingly fluent in neither English nor Japanese, I’ve always wondered what his story was. Any info gratefully received by the Chico Roland Appreciation Society c/o the usual address.