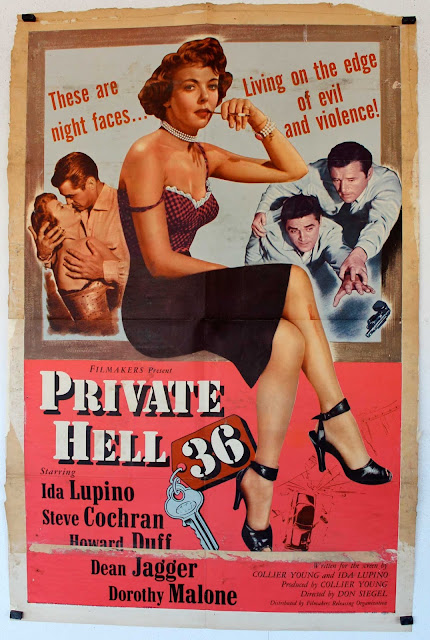 Produced and distributed by ‘The Filmakers’ (the pioneering non-studio outfit founded in 1950 by Ida Lupino and her soon-to-be-ex husband Collier Young), ‘Private Hell 36’ is a low budget crime picture telling the tale of a cop-on-the-edge lured into perdition by his association with a down-at-hell night club singer, played by Lupino, who also co-wrote the script (with Young), a year or so after she directed ultra-hardboiled classic ‘The Hitch-Hiker’.

Don Siegel directs - his only assignment for The Filmakers - and Sam Peckinpah fans may wish to note that, though their man had no discernible creative input on this film, he was nonetheless on hand as “dialogue director”, having assisted Siegel a year earlier on the explosive ‘Riot in Cellblock 11’.

Based solely on the information in the preceding paragraphs, you’ll appreciate that I approached ‘Private Hell 36’ more or less certain that it would be a sure-fire fucking classic (pardon my French), but, after viewing, I’d caution potential viewers to dampen their expectations. This is a decent, efficient little picture, but despite the big-hitters on both sides of the camera, it never really engages with the kind of sordid thrills implied by its attention-grabbing title.

Cochran and Duff’s characterisations here are effective and believable, as is the latter’s interplay with his wife (Dorothy Malone), but some of the stuff in the film’s first half nonetheless borders on the hokey. It’s always nice to see Dean Jagger popping up, but the relationship between his canny Station Captain character and our central pair of cops comes across as annoyingly paternalistic, whilst the core mechanics of the plot they become embroiled in stretch our credulity just a little too far for us to really take it seriously.

I mean, would the Captain really send two of his best men off on a long-term assignment that required them to hang around the race-track all day, accompanying a night club singer who received a hot $50 dollar bill as a tip, just on the off-chance that she might recognise the guy who gave it to her -- and then assign them to guard her by night as well…? Seems to be going way out on a limb for a pretty slim lead to me.

Things certainly become a lot more interesting however when Bruner & Farnham eventually do get their man, accidentally killing him at the climax of an under-cranked, out-of-town car chase and apparently suffering no repercussions for their fatal recklessness (the Captain is shown joking with them and patting shoulders right there on the scene).

Before Jagger arrives however, things have already taken a far darker turn following the crash. As the two cops survey the wreckage, they follow a trail of high denomination bills fluttering in the breeze, and discover the box in which the deceased suspect had stashed the proceeds of a recent armed robbery. Without a word, Bruner – who had made the opening moves in his romance with Lupino’s character just a few hours earlier, chatting to her about diamond bracelets – picks up a few massive wads of cash, and pockets them.

Casually done, this is a real shocker, and immediately turns the film on its head, simply because, up to this point, we had no intimation that Cochran’s character was anything other than a trustworthy, rough-around-the-edges good guy.

Naturally this leaves Farnham, as his partner, in a tight spot. Though he immediately expresses shock and disbelief at Bruner’s theft, he can’t bring himself to rat on his best friend once the Captain turns up. In subsequent scenes, he may harp on about being sick to the stomach and unable to look at his mug on the mirror and so on, but when Bruner introduces him to the concept of “your share” on their drive back to town, and suggests a diversion to a spot where they can stash the loot, he quietly follows his friend’s lead.

As so often in the world of noir, the path to the dark side is a slippery slope, rather than a sudden cliff edge – just a few small decisions, taken a bit too quickly, from which there is no way back - and in its best moments, ‘Private Hell 36’ reflects this, evoking a sticky feeling of creeping, soul-withering corruption. It’s underplayed for sure, but it’s there, lurking in the background, right from the moment Cochran impulsively pockets the dough.

The ‘36’ of the film’s title by the way refers to the number of the rented trailer which the pair use to stash their ill-gotten gains – a brilliant touch which provides a great setting for the momentarily atmospheric finale, but like so much in this movie, its potential is sadly under-utilised.

Already a seasoned specialist in low budget crime flicks by this point in his career, Siegel’s direction is breezy and fast-paced, but as a filmmaker who always privileged movement over visual style, he has little time for the kind of brooding, expressionistic flourishes which may have given visual emphasis to the script’s darker themes (an oversight which may at least partially be the fault of time and budget constraints, I’d imagine).

Instead, we get bland-looking interior sets and uniform daylight for the most part, although the location shooting at the race-track has some scope and energy to it, and the rudimentary car chase gives us a welcome blast through that ubiquitous b-movie scrubland that we’d get to know so well in subsequent decades.

Lurid, sleazoid jazz meanwhile seems to creep into the background of almost every scene, whether emanating from the radio of a crashed car, from Lupino’s ‘night club’ (which looks more like a suburban soda counter, to be honest), or merely piped into the air from nowhere – a siren call to the darker underbelly of this ostensibly dull, work-a-day world.

As with so many of these post-HUAC ‘50s noirs though, this is a character piece really – a quiet little ‘actor’s movie’ that sometimes feels closer to a TV “play for today” piece than a big screen thriller. Lupino is as brilliant as ever – I’d describe her character as a “quintessential hard boiled dame”, but she’s f-ing Ida Lupino ferchrissakes, so you knew that already – and Cochran and Duff bounce off each other really nicely.

The former has a touch of that riveting Italian-American machismo about him (connecting the dots between Richard Conte and Pacino, possibly?), whilst Duff has a pudgy-faced, jobs-worth, Joe Friday kind of vibe about him that makes it all the more fun seeing him descend into more tormented, morally compromised territory than that self-righteous shmuck ever had to contemplate.

You get the feeling that a writer like Jim Thompson or David Goodis could really have gone to town on a story like this, turning it into an airless nightmare of moral degradation and self-immolation, but at every turn, the filmmakers (and indeed The Filmakers) hold back. It’s all just a little too polite, too restrained – a little too mainstream perhaps? - to really deliver on the kind of emotional gut punch the material demands.

All the ingredients are in place here for a devastating, pitch-black noir masterpiece, but as it is, it all just seems a bit timid and under-cooked. Shaky scripting and continuity errors bespeak a lack of time or effort, and when Lupino at one point tells Cochran she’s “seen that bit on ‘Dragnet’”, it feels all too appropriate to the finger-wagging, buddy-cop morality tale the movie eventually settles for.

(Far be it from me to second guess respected movie industry professionals long since in their graves, but wouldn’t this story have been a lot more exciting if Lupino’s character was actually a nefarious femme fatale with underworld connections, knowingly coaxing Cochran to his doom? As it is, she eventually emerges as rather boring and incidental to the central plot, in spite of Lupino’s best efforts to liven her up a bit; sure she’d like some diamonds, but what girl wouldn’t? She certainly didn’t mean to encourage her boyfriend to steal for her, and is shocked when she learns of his crimes, etc etc.)

‘Private Hell 36’ is certainly not a bad movie, I should stress – it’s a solid programmer with the seed of a great story buried in it, and, given the weight of talent on both sides the camera, it naturally has its share of arresting moments. But, at the end of the day, it feels like a very minor work for all concerned – certainly nowhere near the level of greatness achieved by Lupino on ‘The Hitch-Hiker’, or by Siegel a few years later on ‘Invasion of the Body Snatchers’. 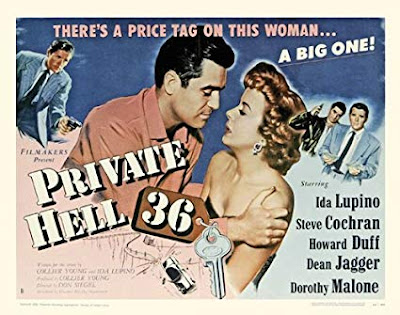 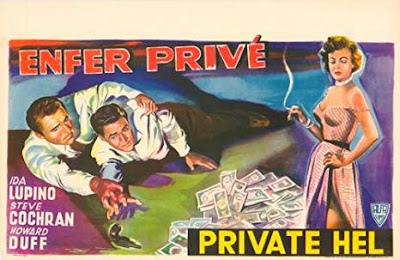 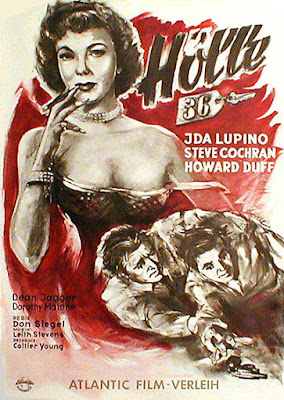 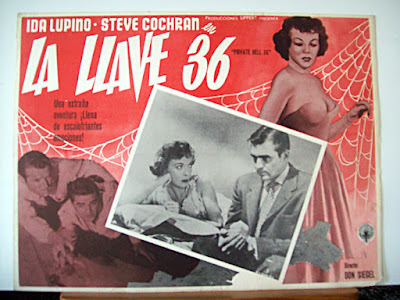 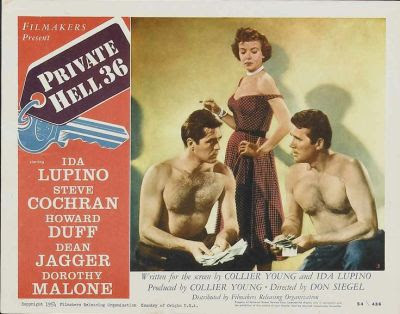 (Sadly, the scene depicted on this lobby card does not appear in the film itself.)