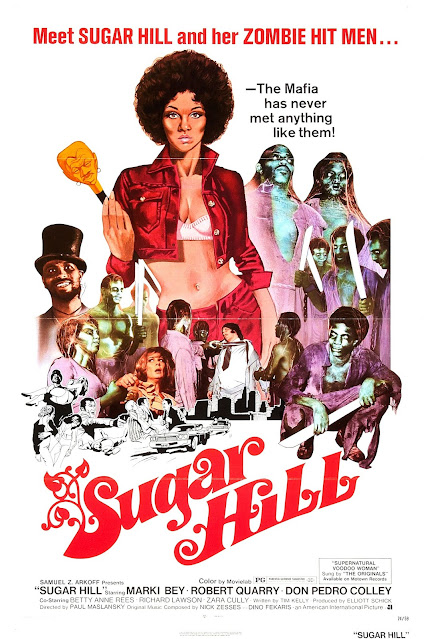 Well, who on god’s earth could resist a poster like that if it popped up outside their local cinema?

Say what you like about American International Pictures, they sure knew their marketing, and the decision to mix up a blaxploitation female revenge story in the ‘Coffy’/ ‘Foxy Brown’ mould with a voodoo / zombie movie was not just a great idea, but an inevitable one, in view of the company’s place in the market circa 1974.

Not only were AIP the originators of the aforementioned Jack Hill/Pam Grier classics, but the success of the Count Yorga pictures had also put them in the forefront of the brief trend for contemporary, U.S. set reinventions of classic gothic horror tropes. Indeed, their blaxsploitation/horror crossover line was already thriving in its own modest fashion thanks to ‘Blacula’ (1972) and ‘Scream, Blacula, Scream’ (1973).

As it transpires, ‘Sugar Hill’ arrived right at the tail end of these trends’ parallel box office ascendency, just before Arkoff and Nicholson started trying to realign the AIP’s output from 1975 onwards. As such, it should really have been the crowning glory of the company’s achievements in this fertile era; the icing on an already fiendishly overstuffed grindhouse cake.

Trying to assign blame for the fact that it isn’t makes for a less than edifying assignment, but…. let’s just say that, whilst watching ‘Sugar Hill’, the only thing running through my mind from start to finish was: I wish Jack Hill had made this with Pam Grier.

I mean, clearly those guys would have knocked it outta the park. Can you even imagine? Pam in full effect as the voodoo queen, commanding her zombies, as Jack got the chance to mix up the visceral pulp mayhem of his black action films with the gleeful monster kid craziness of ‘Spider Baby’. Wonderful. The late Sid Haig would no doubt have been ragin’ around as some spike-toothed mob enforcer, and no doubt they’d find someone totally far-out - like Exuma, maybe? - to play the Baron Samedi / Vodou Loa character. Allen Toussaint and Dr John might be thrown into a studio together to cook up the soundtrack, and… oh man. It would have been incredible.

Unfortunately though, that’s not the film we got. I believe Hill was still finishing up ‘Foxy Brown’ around the time this was shot, and he subsequently cut his ties with AIP following disagreements with management on the set. Grier meanwhile stayed with the company, but after ‘Foxy Brown’ she (or perhaps, her management) seemed intent on trying to make a dent in the mainstream via watered down, PG-rated re-hashes of her earlier hits like ‘Sheba Baby’ and ‘Friday Foster’ (both 1975).

In lieu of the A-team, Arkoff instead placed a call with his buddy Paul Maslansky, erstwhile producer of such AIP-distributed European horror titles as ‘Castle of the Living Dead’ (1964), Michael Reeves’ ‘She Beast’ (1965) and Gary Sherman’s classic ‘Deathline’/’Raw Meat’ (1972). Having recently returned to America after fifteen years abroad, Maslansky apparently had a yen to direct. So, Sam gave him a brief run-down on what black exploitation films were all about, suggested that combining one with voodoo would be a dead cert, then he basically just handed him the keys and told him not to dent the bumper.

In order to keep costs down and avoid hassle with the unions, production took place in the less than atmospheric environs of Houston, Texas, subbing imperfectly for New Orleans, on a punishing tight three week schedule. A script was cobbled together from somewhere or other, and actress Marki Bey - top-billed for the first and last time after playing supporting roles in a couple of pictures for AIP director/producer Arthur Marks - was recruited to play the title character. She’s not bad, but… she’s no Pam Grier, that’s for sure. (1)

Likewise, ‘Sugar Hill’ is not a terrible film by any stretch of the imagination, but… it’s certainly not an exceptional one either. The very definition of ‘adequate’, it’s one of those movies that’s just kind of…. there, for the most part. It delivers exactly what you’d expect of a 1974 AIP-produced blaxploitation voodoo movie, nothing more, nothing less. Glimpses of innovation or inspiration are few and far between.

Predictably, the story begins with Diana ‘Sugar’ Hill propping up the bar in her upstanding boyfriend’s kitsch, voodoo-themed nightclub, where we get to see a bit of the floorshow, and hear Motown group The Originals’ laboured and rather heavy-handed theme song, ‘Supernatural Voodoo Woman’. (‘Theme from Shaft’ it ain’t.)

The club is proving a runaway success, so naturally the local, multi-ethnic mob (led by Count Yorga himself, Robert Quarry) want in on the action. Upstanding BF of course is having none of it, so before you can reach for the fast forward button, he comes a cropper in the car park, and Sugar is out for sweet revenge.

Naturally, her first stop is Mama Maitresse (Zara Cully), who lives a ghostly existence in a decaying colonial mansion amid a swampy estate swathed in prop department Spanish moss and gallons of dry ice. After the requisite sacrifices and incantations, Baron Samedi (a wild-eyed, permanently grinning Don Pedro Colley) arrives resplendent, as his ping-pong ball-eyed zombie slaves rise from the mulch of the forest floor to take care of business.

Before you can find any more synonyms for ‘predictably’/’naturally’/’of course’ etc, Quarry and his assorted despicable cohorts begin to meet their supernatural doom in a neatly episodic fashion, and….. that’s about as far as a plot synopsis needs to go, really.

On the plus side here then; even if the swampy, Louisiana atmos isn’t quite what it should be, the blind, silver-eyed zombies are an effective, distinctively creepy creation, and must have made quite an impression on audiences back in the pre-Fulci/Raimi era, when such soil-covered, filth-encrusted revenants were a rare sight indeed on the big screen.

Colley is full of fun too as Baron Samedi, going waa-ay off the deep end performance-wise, even if his top-hatted Loa character never really manages to move beyond the more obvious clichés of his part, and the ‘gags’ he dishes out as he drops in on his assorted victims are uniformly woeful.

Also providing excellent value for money is Quarry, who, despite reportedly being cast in this film simply because AIP were legally obligated to provide him with one more job before nixing his contract, nonetheless does sterling work. Giving every indication of having thoroughly enjoyed himself, he transforms his underwritten mob boss character into a hip, razor sharp figure who actually becomes strangely likeable, especially when sparring with his dim-witted, racist blonde girlfriend Celeste (Betty Ann Rees).

Those minor highlights aside however, there’s not really a lot to shout about here. Though there’s some nice lighting and camerawork here and there, in stark contrast to Hill, Maslansky’s direction is depressingly inert. It’s bad sign that he fails to invest even the calamitous early death of the boyfriend character with much dramatic weight, and for the most part proceedings remain equally flat thereafter.

Although he went on to enjoy a highly successful production career through the 70s and 80s (masterminding the ‘Police Academy’ franchise, of all things), it is notable I think that ‘Sugar Hill’ represents Maslansky’s only directorial credit. The drably utilitarian, “will this do?” vibe of most of the footage he captured here answers the question of why he never gave it another shot pretty concisely.

I probably can’t entirely blame Maslansky (who seems like a perfectly nice guy in interviews incidentally) for my next complaint – it sits more with a combo of him, Arkoff and Nicholson, writer Tim Kelly, the whole outfit really I suppose, but…. well, how can I best put this?

Whilst employing white writers and directors to make majority black cast films in the U.S.A. was never going to be an ideal scenario, my belief is that, when AIP hired hip white filmmakers like Hill, Larry Cohen and Jonathan Kaplan to make black action films for them in the early 1970s, those directors at least gave the impression that they were trying to engage with black audiences.

They positioned themselves on the same level as their hypothetical viewers and took an honest stab at reflecting their concerns back to them, sometimes pushing back against the more objectionable content demanded by the studio, and often allowing their actors to bend the material to their own creative/personal needs. To not put too fine a point on it, good movies resulted.

‘Sugar Hill’ by contrast merely feels like it’s patronising its target audience. Though the “revenge against whitey” plotline essentially isn’t much different to that of ‘Coffy’ or ‘Black Caesar’, there’s no real depth here, no impact or involvement. As each of the bad guys in turn prove themselves racist, corrupt or despicable before getting iced by Sugar Hill’s zombies as the guffawing Baron Samedi looks on, the payback is so predictable, so simplistic, that viewers – be they black, white, blue or green – simply feel as if they’re being played for fools, more than anything else.

It’s as if Arkoff told Maslansky, look, you’ve gotta knock off whitey (and some corrupt, black criminal types too, just for the sake of balance) – that’s what sells the tickets. Lesson learned, he’s just ticking the boxes for his boss here. Social relevance? Implicit understanding of the economic inequalities underpinning racial strife? Reflections on the blighted legacy of slavery lurking behind all that voodoo/colonial mansion shtick? Sadly there is precious little of any of that here.

And that’s before we even get to the “only in the 70s” ending, which sees the aforementioned Celeste (the real villain of the piece, to all intents and purposes) being ritually offered up to Baron Samedi as the ‘offering’ to repay him for his hard work icing all the bad guys, leading to us being implicitly invited to cheer in approval as Colley, grinning ear-to-ear, closes in for what he must assume to be a post-credits supernatural rape scene. HAPPY ENDING, everybody!

Boy oh boy. Let’s just skip over unpacking the questionable implications of that one, shall we? It might take a while.

In a sense, ‘Sugar Hill’ reminds me more than anything of the British horror directed by Vernon Sewell for Tigon in the late 1960s, ‘The Blood Beast Terror’ and ‘Curse of the Crimson Altar’ (both 1968). It carries the same terrible stench of wasted potential, of the lightning-in-a-bottle potential of a unique confluence of time, talent and ideas being squandered, just because the guys in the back office were more concerned with delivering exploitable pictures as quickly and cheaply as possible than they were with actually making a movie anyone in their right mind would wish to see more than once.

When undertaking creative work, I’ve always tried to remember the old axiom that, if you aim for ‘good’, hopefully you’ll get something average - but if you aim for ‘average’, you’ll inevitably end up with shit. I wouldn’t go so far as to say ‘Sugar Hill’ is shit – it’s a perfectly serviceable movie, and certainly worth a look for fans of this particular aesthetic terrain. But, if the film’s makers had borne the above wisdom in mind, it could easily have been worth two looks, or even eight or nine, if you get my drift. And the restless spirit of Mr. Arkoff may wish to note that we’d still be paying for it every time too.

Now if only they’d got Jack Hill to make this, and persuaded Pam Grier to star, and….

(1)In fairness to Bey, this is a criticism which can just as easily be levelled at literally anyone else in the film industry. (Werner Herzog? I mean, he’s ok, but he’s no Pam Grier.)