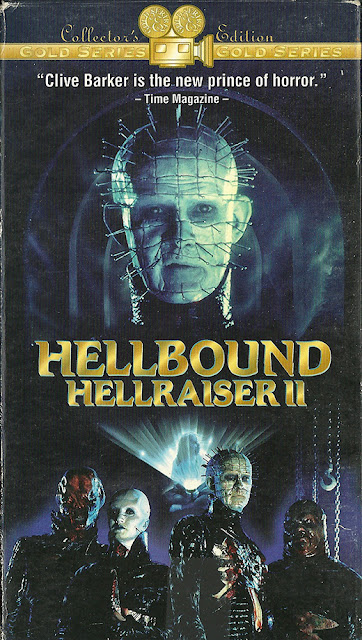 As I have stated before in these pages (in last year’s review of The Void, funnily enough - a film that likely has more than a little bit of ‘Hellbound’ mixed into its polyglot DNA) -- there is nothing worse than a film that is almost really good.

In terms of the expectations one might reasonably have for a first sequel to Clive Barker’s (still exceptional) ‘Hellraiser’ directed by someone who is not Clive Barker in fact, the first few reels of ‘Hellbound’ are genuinely, unapologetically really, really good. For half an hour or so here, we have a perfect, “this-time-it’s-war” expansion of the potent themes and ideas inaugurated in the first film, confidently pulled into a bigger budget, commercial arena by a creative team who seem to have broadly understood where Barker was coming from with the whole ‘Hellraiser’ thing, and just itching to start splattering blood across the walls.

From the outset, the idea of letting Barker’s Cenobites loose within the wards of the sprawling, Victorian lunatic asylum where the first movie’s heroine Kirsty (Ashley Lawrence) finds herself confined is a tantalising one, rich in ghastly possibility, whilst the subsequent revelation that Dr Channard (Kenneth Cranham) - the corrupt and perverse, egotistical doctor who cruelly oversees this backwards institution - is secretly an artefact-hunting occultist obsessed with trying to unlock the Cenobite puzzlebox is also a delightful – if rather far-fetched – development.

The extended set-piece that sees Channard undertaking a ritual to resurrect Clare Higgins’ character Julia, utilising the blood-stained mattress upon which she was murdered and using a self-harming mental patient as an unwitting sacrificial victim, is one of the strongest and most effective gore scenes in all of ‘80s horror. Though almost sickening in its extremity (I can’t believe they really expected it to get through either the BBFC or MPAA unscathed in the late ‘80s), this sequence is horrifically compelling, and, though hair-raising in its weird psychological/symbolic implications, its nastiness never feels gratuitous.

Sickening in a slightly different way, the subsequent scenes in which Channard develops a kind of kinky relationship with the mummified, blood-drinking Julia are just as morbidly fascinating. Higgins in particular is great here, clearly enjoying her role as a monstrous femme fatale despite the various gruelling make-up jobs she presumably had to contend with, and Cranham, though clearly not really a ‘horror guy’, is an experienced enough actor to know when to just go with it, giving this villainous duo a fantastic, lip-smacking ickiness all of their own, whilst their scenes together capture a highly period specific “yuppies from hell” kind of vibe, taking the (presumably accidental) “ugly ‘80s” aesthetic that predominated in Barker’s film and running with it, to deliriously grotesque effect.

Just as we’re getting ready for the fur to really start flying as the story enters its second act however, it begins to become increasingly clear that ‘Hellbound’ does not intend to capitalise upon this strong start in quite the way we (or at least I) might have hoped.

Getting Ashley Lawrence to return as our nominal protagonist provides some welcome continuity, and throwing the mute (autistic?) puzzle-solving girl whom Channard hopes will help him unlock the Cenobite box into the mix is an interesting idea. But, whereas Barker’s film established ‘Hellraiser’ as one of the one only ‘80s horror franchises with the potential to incorporate complex, multi-layered female characters into its mythos, by the time these two girls have teamed up in ‘Hellbound’, they’ve already been whittled down to little more than wide-eyed Alice surrogates, and, as soon as they pass through a temporary gateway in the asylum wall and begin exploring the Cenobites’ dimension, the movie finds itself bound for a rather different kind of “hell” to the one the filmmakers presumably intended us to experience.

Although few (if any?) digital effects are used in ‘Hellbound’, watching the second half of the film nonetheless put me in mind of the simultaneous feelings of sensory overload and alienated boredom engendered by so many 21st century CGI “spectaculars”.

With the possible exception of Higgins’ Julia, none of the film’s characters really have a strong enough pull to their individual arcs to keep us focused after this departure from the “real world”, and any investment we initially had in them is subsequently lost, along with any sense of cause-and-effect story-telling, real world logic, suspense or narrative momentum.

As fantastical visuals, melodramatic plot turnarounds and seemingly endless corridor chases pile up with little rhyme and reason –sometimes feeling more like a goth-ified version of ‘Labyrinth’ than anything we’d wish to see in a ‘Hellraiser’ sequel - our senses are soon exhausted, leaving us easily distracted from whatever the hell is supposed to be going on.

As is so often the case in 21st century film and TV, conventional, A-to-B style plot development is more or less abandoned here, as the story turns more toward a series of ham-fisted, phantasmagorical psychodramas aimed at excavating the private traumas and family backgrounds of characters who were little more than wafer-thin to begin with. Most chronic in this regard is the protracted sequence in which Kirsty is reunited with the spirit of her monstrous Uncle Frank. Taking place in some kind of chamber filled with sheet-covered bodies on slabs, this whole business is ultimately just tedious and nonsensical, completely missing the mark of whatever portentous insight the script was presumably trying to invest it with.

Unfortunately, this approach also crosses over into the film’s treatment of the Cenobites themselves. Fascinating, terrifying, morally ambiguous and perversely beautiful creations, the four members of the first film’s Cenobite “family” are easily the most potent horror movie monsters of their era, and yet, Randel’s sequel casually torpedoes their mystery and kicks them out of the movie before the final act with scarcely more than a shrug.

Though again, it’s a potentially interesting notion, I simply do not buy the idea that Doug Bradley’s Pinhead ‘evolved’ from the spirit of a disillusioned World War One officer – at least in the way it is presented here - and to subsequently have him and his hyper-demonic family get all weepy and basically just curl up and die on us after Kirsty reminds them of their lost human identities just strikes me as the lamest, most fanbase-cheating load of weak-ass shit I’ve seen in a franchise horror film in living memory. (1)

Even worse though is the fact that the inglorious demise of Pinhead and co leaves us to battle through another half hour of additional run-time in which the role of the Big Bad is shifted across to a frankly RIDICULOUS looking Kenneth Cranham / dragon hybrid thing – a painstakingly rendered stop motion/latex creature effect than holds the rare distinction of looking even stupider than something a bunch of underpaid CG yahoos working for SyFy/Asylum might have whipped up if handed the same brief twenty five years later. Ye Gods.

In a sense I suppose, it is weirdly fitting that a Hellraiser movie should take us on a giddy journey between cinematic highs and lows, thus mirroring the “pleasure in pain” ideology so beloved of the Cenobites themselves; but, I suspect even Pinhead himself might have found the sharp plunge between the two experienced here quite gruelling. Whilst the self-evident strengths of the film’s first half make ‘Hellbound’ essential viewing for any fan of creatively executed, gory horror, what happens after that properly hurts, especially once one considers the vast potential for good stuff that has been thoughtlessly squandered.

Still, it’s not all bad I suppose. We at least get to enjoy a truly epic forced perspective / matte shot in which some tiny characters navigate a gigantic, Esher-inspired labyrinth (a well-earned round of applause to the production designer and effects team for that), whilst the general ‘look’ of the Cenobite realm reminded me very strongly of the level designs for ID Software’s epochal ‘Doom’, which turned up a few years after this film’s release, thus creating definite flashback potential for anyone who, like me, spent far too many of the golden days of their youth senselessly plasma-gunning cyber-demons. So, there’s that at least.

(1) Admittedly, I don’t tend to watch very many high numbered horror sequels, so I’m sure that fans of Freddy and Michael Myers et al have probably been subjected to greater indignities over the years, but for now, this “boo hoo, I used to be a real boy [collapses in pile of dust]” guff holds my personal record for lameness – very much the ‘80s equivalent of Count Dracula tripping over a hawthorn bush or falling off a balcony.