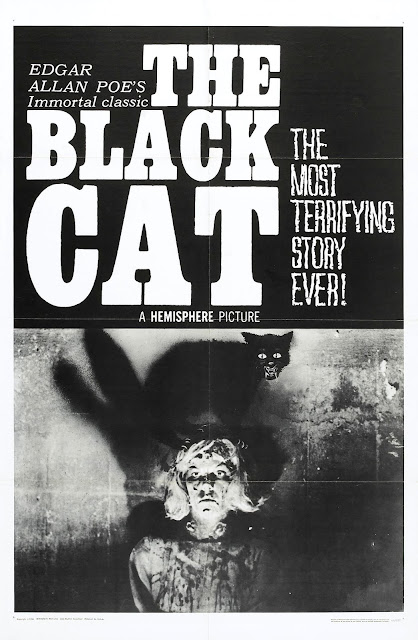 It says something about the wild liberties cinema has taken with Edgar Allan Poe’s work over the years that Harold Hoffman’s 1966 independent production of ‘The Black Cat’ is actually one of the more faithful adaptations of Poe I can remember seeing, despite featuring a brawl at a rock n’ roll bar, an application of insulin shock treatment, a guest appearance by the Scotty McKay Quintet, a car chase and a man trying to feed champagne to his pet toucan.

Though the film-making here is pacey and technically proficient, one-shot director Hoffman made this one in Dallas, Texas in 1965, with funding partially provided by New York-based Hemisphere Pictures (yes, the Blood Island / Filipino co-production guys), and a sense of ineffable regional oddness shines through loud and clear in the finished product.

Aside from the 1960s setting, Hoffman’s main deviation from the text of Poe’s most disturbing and personal story is the fact that our protagonist Lou (Robert Frost – not the poet, obviously) is no longer a struggling writer, but in fact a very wealthy one. Lou (no surname provided) resides comfortably in a grand mansion he has inherited from his late parents, and the rationale for his descent into alcoholic delirium is given a more contemporary, Freudian update, as he is haunted by his hatred for his over-bearing father, whilst simultaneously revering the memory of his sainted mother.

When we meet Lou, he has been married for one year to the pretty but rather vacant Diana (Robyn Baker), apparently winning her heart with his romantic sensibility, child-like kindness and grasp of poetic-type lingo, so that’s nice for them both. Slightly less encouraging however is the fact that Lou increasingly likes to stay up all night, getting blind drunk and hanging out with his menagerie of caged animals, whom he speaks to in a crazy, cackling voice whilst attempting to force feed them alcohol.

One gets the feeling that Robert Frost may have made more than a few return visits to his local picture palace to catch Anthony Perkins in ‘Psycho’ a few years earlier, and he does great work here, delivering an endearingly twitchy, hellzapoppin’ uncomfortable-in-his-own-skin type performance. Sadly, Baker is, shall we say, an actress of more limited range, and the film ultimately suffers from her failure to garner much sympathy from viewers once her husband goes off the deep end.

As per Poe, Lou’s delicate mental balance seems to be upset by the introduction of the titular black cat, Pluto, into his household, as the cat soon comes to replace Diana in his affections. Also as per Poe, Lou begins heading further afield to get hammered – in this case, to a swinging joint where the aforementioned Scotty McKay and his boys (best known for their memorably raucous recording of Train Kept A-Rollin’, issued in 1968 with ‘Theme from The Black Cat’ on the flip) are busy laying down polite, white bread versions of ‘Bo Diddley’ and ‘Brown Eyed Handsome Man’.

These scenes are a lot of fun, complete with go-go dancers, a small crowd of modishly attired extras ravin’ it up, and the inebriated Frost looking cool as a cucumber as he cuts some rug, lit cigarette hanging precariously between his lips. (‘60s garage aficionados will also no doubt appreciate the chance to get a good look at the band doing their thing too.)

It’s kind of wonderful to suddenly realise we’re watching an Edgar Allan Poe movie with a rock n’ roll soundtrack (there are some groovy instro cuts too, and McKay and the band return later to sing ‘Sinner Man’, complete with piratical eye patches for some reason), and things get even more enjoyable when Lou’s raging drunkenness gets out of hand and the whole scene degenerates into a full on bar-room brawl, flying stools, smashing mirrors and everything. Good times!

In fact, whilst the success of the Corman/AIP Poe films earlier ‘60s must surely have inspired this project, at least in terms of convincing people it was a financially viable prospect (you can almost hear the filmmakers exclaiming “hey, they haven’t done ‘The Black Cat’ yet – let’s go!”, having apparently missed the middle segment of 1962’s ‘Tales of Terror’), it’s interesting to note the extent to which Hoffman refuses to draw upon their example here, eschewing gothic cliché and instead keeping things resolutely contemporary in terms of both setting and style.

As a result, ‘The Black Cat’ ends up feeling more akin to one of Corman’s snappier, black & white ‘50s productions, or one of those oddball hipster flicks that Something Weird Video used to specialise in digging up (indeed, I first watched ‘The Black Cat’ many years ago on a SWV double feature with the demented beatnik serial killer movie ‘The Fat Black Pussycat’ (1963), which I must get around to reviewing at some point).

After all this rockin’ fun, things adhere fairly closely to the Poe blueprint, and, though the film thankfully steers clear of full-on animal cruelty, prospective viewers should be aware that animals were at least made to feel a bit uncomfortable during its production, with a cup of liquid thrown over a caged monkey and a cat on a make-shift leash getting dragged up a flight of stairs, as well as providing a convincingly gruesome (staged) depiction of the pussycat gore the subject matter demands. The close up of a severed eyeball amid a mass of matted blood and fur in Lou’s clawed hand in particular is a great horror moment, though animal lovers of a sensitive disposition may beg to differ.

Once Lou has managed to burn his goddamn house down whilst in the process of electrocuting poor old Pluto, our lad is understandably confined to a sanatorium, where a scene depicting the application of the aforementioned insulin therapy (a grim and discredited procedure, needless to say) is truly rather horrifying, with his screams going way behind the comfort zone.

After a routine “yes doc, modern psychiatry has left me completely cured, yep, I ‘m a changed man alright, no doubt about that whatsoever” type sequence, Lou is back on the street – or, more specifically, in the more modest suburban home he now shares with Diana – and naturally he’s soon back to his old tricks. Another fun scene finds him freaking out in a low-life drinking den, where he unleashes a stream of crazy-man invective in the direction of a prospective hooker who has latched onto him. Amazingly, she continues to court him as a potential customer, even after he has slurringly accused her of being “a witch”, “the devil’s wife”, “an agent sent by my father” and “a cat in human form”. She must have really needed the business.

If the film drags a bit after this point, that’s largely just due to the fact that it plainly follows the story – and of course, we all know the story. Could the resulting feeling of ho-hum over-familiarity perhaps offer us an insight into why most other Poe adaptations tended to go so wildly off-piste with their story-telling (particularly in the USA, where, I gather, students are even required study this stuff in High School)?

The one remaining highlight – and it’s a doozy – comes when Lou (as per the story, once again) suddenly brains his long-suffering wife with a wood axe – whammo! This is a startlingly full-on, ahead of its time gore effect which punk rock fans of a certain age will immediately recognise as the source of the still used on the cover of The Angry Samoans’ Inside My Brain album.

To put my ‘serious critic’ hat on for a moment, ‘The Black Cat’s main weakness as a Poe adaptation is its superficiality. Whilst Hoffman dramatises the story in an admirably straightforward fashion, in the process of updating the explanation for the protagonist’s condition to reflect a paradigm of mid-20th century pop-psychiatry, he entirely jettisons Poe’s doom-laden musings on the underlying evil of the human condition, and loses most of the bleakly disturbing atmosphere which accompanied it in the process.

Meanwhile, we’re never really given a chance to engage with or share in Lou’s internal torments, despite Frost’s highly enjoyable performance, meaning that the movie’s eventual message never really delves much deeper than: hey girls, keep away from rich guys with parent issues who go a bit wacky when they drink – they ain’t no good, so do the right thing and you’ll keep your cranium intact.

Whilst these deficiencies prevent it from really being hailed as a lost classic of the horror genre however, Hoffman’s film is still a fun, divertingly weird watch, complete with a handful of startlingly memorable moments, a few laughs and some cool tunes, and its near total obscurity strikes me as slightly unfair. I certainly found it to be well worth the investment of 70-something minutes, and those with an interest in Poe adaptations and / or off-beat American regional horror in general are strongly encouraged to track it down.