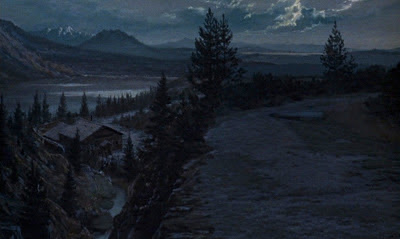 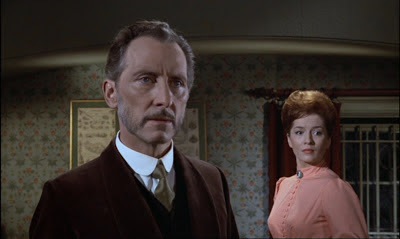 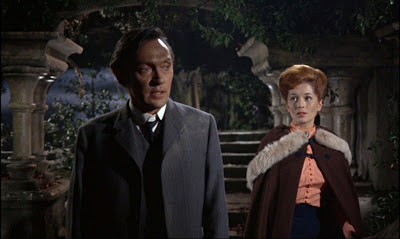 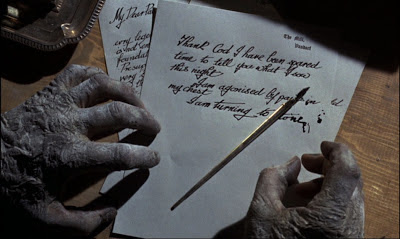 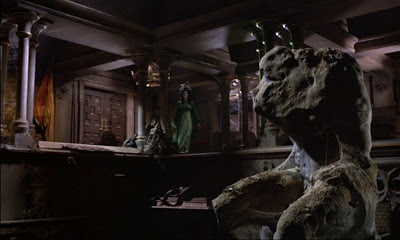 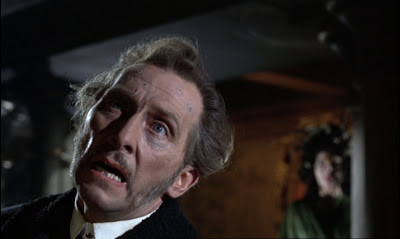 Contrary to the grand narrative that sees Hammer going from strength to strength following the establishment of their horror brand in the late ‘50s, the early ‘60s actually proved a pretty tempestuous time for the studio, and for their star director Terrence Fisher in particular. After a series of commercially misguided Fisher-helmed projects bombed at the box office in ’61-‘62, Hammer’s American partners were getting cagey, the BBFC were taking a stricter approach to the perceived excesses of the studio’s horror subjects, and both Peter Cushing and Christopher Lee, apparently uneasy about their typecasting as horror stars, were cutting down their Hammer commitments and seeking work elsewhere.

As a result, many were predicting that the studio’s run of international success would run out of steam entirely during ’63-’64, and this atmosphere can very much be felt in their biggest 1964 prospect, ‘The Gorgon’ - one of those movies that seems to be indelibly marked by turmoil and bad blood behind the scenes, all the more so given the assorted disagreements that resulted from the convoluted scripting process, which saw a three way tug of war between original writer J. Llewellyn Devine, Hammer writer/director John Gilling and producer Anthony Nelson Keys, none of whom came away satisfied with the finished product.

Although ‘The Gorgon’ marked the much-heralded return of Fisher, Cushing and Lee (together for the first time since 1959’s ‘The Mummy’), the resulting film hardly seems a likely candidate to revive studio’s fortunes, being perhaps the most troubling, uncertain and generally weird entry in all of Hammer’s ‘60s output, replicating the inexplicable decision-making that helped make ‘Curse of the Werewolf’ and ‘The Phantom of the Opera’ such financial disasters, but with arguably even less on hand to help win over a hostile audience.

Quite what possessed Hammer to green-light inexperienced screenwriter Devine’s tale of a two thousand year old Greek gorgon roaming around a turn of the century Germanic castle is anyone’s guess, but, on the surface at least, it leads to a inherently absurd, underdeveloped b-movie premise that seems to simply hang in the void, disconnected from any of the more storied gothic traditions that provided Hammer with a readymade background and familiar dramatic arc for their other horror films.

As perhaps befits this peculiar storyline, ‘The Gorgon’ is chiefly notable to fans as one of the most ambiguous and oddly existential of Hammer’s ‘60s films – a kind of brooding, bad tempered fairytale that seems to hark back more to the gothic of Goethe or Ludwig Tieck than Bram Stoker - and as an odd diversion in Fisher’s filmography, in which the strict Christian duality and comforting sense of cosmic balance with which his work is often credited seems to break down completely, leaving an unsettling absence in its wake.

Our first clue that this is some slightly unusual Hammer business comes via Cushing’s character, Dr Namaroff. Given enough screen time to suggest him as a protagonist of sorts, Namaroff is a reticent and secretive sort of fellow who seems to bully and mislead those around him whilst concealing some greater purpose, and his inconsistent behaviour will initially have those used to the simplistic dynamics of pulp storytelling performing mental cartwheels trying to decide whether he’s the hero or the villain of the piece. Seemingly spending most of the movie brusquely dismissing people from his presence, denying knowledge and refusing to answer questions, Cushing’s performance owes a lot to his similarly forceful, manipulative portrayals of Baron Frankenstein, but with the central goal of that character's single-minded pursuit replaced with, well… what? We don’t know, and he’s certainly not telling anybody.

Normally Hammer’s scripts were tight as a drum, with logical plot progression and linear motivations kept paramount, however daft the initial premise might be. Here though, things seem to have been left to unravel, as if an unseemly sense of continental randomness has been allowed to contaminate the rational imperial brew.

With a basic storyline that sees the father, and subsequently the brother, of a bohemian artist who came to a bad end during the pre-credits sequence travelling to the inhospitable village of Vandorf to investigate matters, proceedings swiftly become rather drawn out and repetitive, with little action (none that makes much sense, anyway) to help lift the overall feeling of narrative inertia. The precise nature of how the hell this gorgon business came about remains frustratingly vague, as, more pointedly, does the extent and significance of Dr. Namaroff’s apparent relationship with his young assistant Barbara Shelley. An entire sub-plot about a mad woman Namaroff keeps locked up in his surgery, and the strange autopsy he carries out after her death, fades away halfway through, having served no narrative purpose whatsoever, and… so on.

The root of all this uncertainty perhaps goes back to the aforementioned conflicts over the film’s script, and it seems likely that Fisher and the cast might have been left to patch up the results on set as they went along. Fisher seems to have realised how flimsy the Gorgon premise is, and wisely uses it primarily as a metaphor to frame the film’s actual drama – that of a rather anaemic love triangle between two weak, troubled men and a lonely, isolated woman, all trying to seek happiness in a stifling, repressive world where the admission of love or affection seems tantamount to death, resulting in an emotional as well as physical process of petrification.

Thankfully, the central cast all to their best inject some life into the material, and must be praised for managing to invest this rather vague and inconsequential story with a believable emotional clout. Richard Pasco in particular is excellent as a far more interesting and conflicted protagonist/juvenile lead figure than you’d expect to find in a Hammer hammer – a strange man for a strange film - whilst Barbara Shelley excels in a role that allows her to get stuck into creating a real character for once. Cushing, of course, owns, seeming to enjoy the challenges presented by his ambiguous and guilt-wracked character, and the only weak link is Lee, blundering in for the final act as a kind of ersatz Van Helsing figure whose sole function seems to be to propel the story towards a conclusion. (Still, at least it hopefully stopped him moaning about how he never gets to play the hero for a few years.)

Also very much in the film’s favour is the fact that it is perhaps the most beautiful film Hammer ever made, with Bernard Robinson’s production design returning to the near Pre-Raphaelite sense of visual splendour achieved by his best moments in earlier films, and maintaining it throughout. The exquisitely detailed matte paintings and models used to establish the landscape around the village and the derelict, neo-classical interior of the hilltop castle are absolutely stunning, as is the hillside cemetery set where Pasco digs up the petrified body of his father and (rather disconcertingly under the circumstances) shares a tender moment with Shelley. Never has Hammer’s much-remarked upon debt to the Gainsborough melodramas of the 1940s been clearer than it is in these lush, technicolour romantic interludes, of which the film boasts several.

Classic-era Hammer cinematographer Jack Asher may have left the company by this point, but Michael Reed does a fine job picking up where his predecessor left off, and even James Bernard’s music is at its best here, easing back slightly on his usual orchestral bombast and instead synchronising the voice of a lone female soprano with the sound of an early electronic instrument called the Novachord to beguiling and otherworldly effect, resulting in one of the only Hammer soundtracks that I might actually consider listening to outside the context of the movie. In all technical departments in fact, the film is impeccable in its creation of a rich, brooding atmosphere, exemplifying all of the expertise and attention to detail that makes the production design of Bray-era Hammer such a joy. Utterly unreal though it may be, the world of ‘The Gorgon’ is one of the studio’s most complete aesthetic creations – a confined, threatening landscape in which human warmth is just another mystery, lurking forever out of reach.

With its temporarily transformed human monster, its concentration on lunar cycles and incessant shots of the full moon, ‘The Gorgon’ could easily have been a werewolf movie, an idea furthered by its repetition of transgressive nocturnal journeys through the dark, dark woods, leading, inevitably, to the forbidden castle, where death or love or transformation awaits – a notion that connects the film on a near-subconscious level to a tradition of imagery that links everything from Grimm’s fairytales to 1941’s ‘The Wolfman’ to ‘Twin Peaks’.

At this point, it’s probably my duty to note that when Prudence Hyman’s Gorgon is finally encountered, the effects used in realising the monster are, shall we say, a little less effective than might be hoped. “The only thing wrong with ‘The Gorgon’ is the gorgon”, Lee was quoted as saying, but whatever consternation such drawbacks might have provoked at the time, hopefully by this stage we can at least appreciate the costume as an honest attempt to realise a creature who really only plays an incidental or allegorical role in the story Fisher and his cast are telling, making her failure to convince seem oddly appropriate (as well as continuing the noble tradition of lovably rubbish Hammer monsters that was to continue through ‘The Reptile’, ‘The Devil Rides Out’ and beyond).

As much as we might enjoy its assorted ambiguities and eccentricities though, there is still something frustratingly incomplete at the heart of ‘The Gorgon’. In the midst of its behind-the-scenes wrangling and disagreements over tone, content and commercial possibilities, it is a film that often ends up merely hinting at its possibilites rather than fully embodying them. Whilst it's certainly not one of the studio’s most immediately satisfying productions though, Hammer aficionados and fans of slow, strange horror films in general will nonetheless find plenty of finer points to appreciate within.