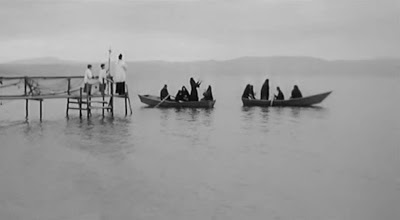 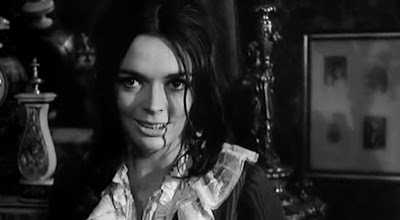 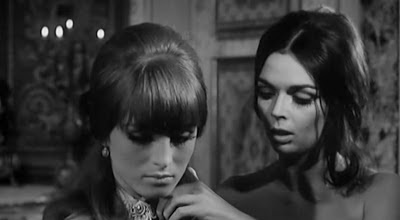 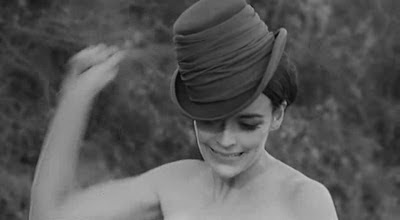 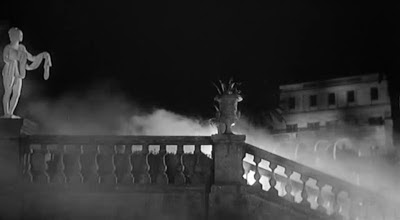 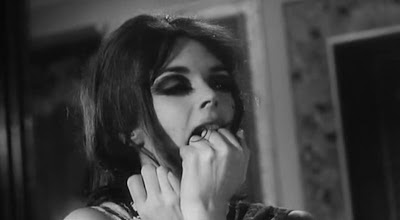 “This isn’t about witches or curses… this is about criminals and assassins!”

The last of the gothic horror films Barbara Steele made in Italy between 1960 and 1966, Camillo Mastrocinque’s ‘Un Angelo per Satana’ is also perhaps the most obscure (it has never been released in English-speaking countries as far as I’m aware). Happily though, it also turns out to be one of the best - certainly the most unconventional and technically accomplished at any rate.

From the outset, the film has a very different feel from creaky medievalism of ‘Castle of Blood’ or ‘Long Hair of Death’, with smooth camera movements and velvety black & white photography that strives for a more ‘refined’ visual aesthetic, seemingly owing more to Italy’s legacy of auteur-driven arthouse films than its thriving b-movie industry. Were it not for the presence of Steele and the fact that everyone keeps yammering on about ghosts and curses, there are moments here where we could be watching some lesser known Visconti film. An elaborately romantic orchestral score by Francesco de Masi – many worlds away from the funky business of his ‘New York Ripper’ and ‘Escape From The Bronx’ soundtracks – does much to reinforce this impression

Such unexpected ‘sophistication’ is matched by the focus of the film’s narrative, as it soon becomes clear that Mastrocinque apparently has little interest in making a gothic horror film. The story’s vague supernatural overtones seem very much like a pretext for him to make the film he really wants to make, as the tale of a sculptor (spaghetti western star Anthony Steffen) travelling to a remote mansion to restore a cursed statue retrieved from the bottom of a lake swiftly gives way to a very Mediterranean yarn of passion and privilege and beauty and betrayal that’s pitched somewhere between a Roger Vadim style neo-classical erotic fantasy and one of Luis Bunuel’s scabrous deconstructions of bourgeois hypocrisy.

There are some requisite horror elements in place (y’know, a murder here and there, ghostly monologues issuing from portraits of deceased relatives, etc..), but - perhaps understandably - Mastrocinque seems far more interested in the possibilities presented by Barbara Steele’s character. The orphaned niece of the local Count, Harriet has just returned from an English finishing school, and is about to undergo a dramatic transformation from dutiful aristocratic debutante to implacable, black-hearted harlot, launching headfirst into an extraordinary catalogue of seductions, duplicity and nihilistic, sexually charged destruction that, for the period at least, extends to some quite shocking extremes.

Nominally possessed by the vengeful spirit of a tragic ancestor, but actually giving every indication of being very much in control of her actions, Barbara proceeds to lure the local strongman away from his devoted family, to seduce her impressionable maid and to turn her against her fiancé, an earnest school teacher whom she then also seduces, upsetting the couple’s world to the extent that he ends up dead and she eternally heartbroken. Not content with this, she also flirts outrageously with Steffen’s sculptor, eventually accusing him of rape in her uncle’s presence, and torments the family’s mentally handicapped gardener in an unsavoury sadomasochistic fashion, with the eventual result that her assorted depredations eventually lead the whole village community to brink of mania. As fishermen and servant girls start turning up dead and rumours of witchcraft and infamy flourish, all the certainties of this simple, feudal world seem turned upside down by this one-woman invasion of amoral, cosmopolitan cynicism, as chaos, fire and death ensue.

More than simply imitating his presumed inspirations, Mastrocinque’s uncompromising approach to the material here succeeds in doing them proud. Bunuel would surely have rejoiced in the demonstration of the carnage that the personal bug-bears of a few stuck up aristos manages to unleash amongst the long-suffering peasantry, and as for that old horndog Vadim, well… he’d surely have been shivering in boots with sheer delight at the perverse erotic charge that Steele generates in her performance here, as she blazes up the screen to the extent that her more excitable fans are recommended to keep a stock of smelling salts close at hand when viewing, in case of involuntary swooning.

Within the context of a self-consciously ‘refined’, black & white 1966 film, Steele’s character’s assorted outbursts of sexual mania really come out of nowhere. Though of course there’s no explicit nudity or whathaveyou, her open seduction of the maid is pretty censor-baiting stuff for the era, and you probably could have seen my jaw drop from space during the unforgettable scene in which she commands the aforementioned gardener to strip her naked, then proceeds to savagely beat him with a riding crop.

Unforgettable stuff to say the least, and so much more shocking for its unexpectedness, years before this sort of thing became par for the course in all those Walerian Borowczyk / Tinto Brass type movies in the tawdry ‘70s.

Camillo Mastrocinque (who co-scripted as well as directing) is certainly not a household name around these parts, but a brief visit to IMDB reveals that, far from the apple-cart upsetting firebrand you might expect, he was actually a 65 year old veteran when he made ‘Un Angelo..’, having directed his first feature in 1937 and been actively engaged in film-making ever since, with over sixty titles to his name (no mean feat, when you consider the travails suffered by the Italian film industry during and after the war). Most of his CV consists of comedies, with the occasional crime film or melodrama, and his decades of experience perhaps help to explain both his more formalised visual aesthetic and his apparent disinterest in the relative johnny-come-lately horror genre. That said, this film’s concentration on taboo-busting sexual intensity – very much the kind of stuff you’d expect from a young, post-war director – remains a bit of a mystery… but hey, he made a flick called ‘The Call Girl Business’ with Anita Eckberg in 1960, plus an earlier gothic horror in ‘64 (‘Crypt of the Vampire’, a Carmilla/Karnstein picture starring Christopher Lee, no less), so presumably he wasn’t too adverse to moving with the times – and in this case, somewhat beyond them - in his later years.

Thus far, pretty remarkable stuff, I’m sure you’ll agree, but ‘Un Angelo..’s biggest flaw is that, in spite of everything, it cops out. Despite setting up its stall with the clear intention of dismissing superficial gothic horror cliché, when it comes time for the pay-off, it can’t close the circle. Why did Barbara *actually* go nuts and start sexing up everyone in sight? Why were the people of the village so easily riled up into a self-destructive frenzy? Well I won’t give things away, but needless to say, Mastrocinque seems unable or unwilling to quite take things to their implied anti-authoritarian conclusions, instead falling back during the final act into workaday penny dreadful daftness that, whilst perfectly acceptable for yr average ‘60s horror film, is a real let down given the potential psycho-social depth of what we’ve previously been shown, making the preceding drama seem like, at best, a misanthropic and heartless demonstration of (wo)man’s inhumanity to man, and, at worst, simply an empty and confounding one.

Still, if it can’t *quite* hit the targets it set out for itself, this film is still one hell of a lot more interesting than the rote gothic horror that viewers may have been anticipating. Not that there’s anything wrong with rote gothic horror mind you – it certainly keeps me contended – but instead, ‘An Angel For Satan’ is one of those movies that kinda makes you want to ring up your higher minded cineaste friends and point them in the direction of a bit of flawed almost-genius that thus far seems to have slipped under everybody’s radar.
Posted by Ben at 18:58

It was released on DVD by an outfit called Midnight Choir in a double-movie set, paired with The Long Hair of Death. I agree that An Angel for Satan is well worth seeing.

Was there anyone in horror more beautiful than Barbara Steele? Wolfman Mac ran The Ghost last night on TV and she was some looker.

barbara Steele is looking a bit like MJ in that top photo, or is it the other way around?