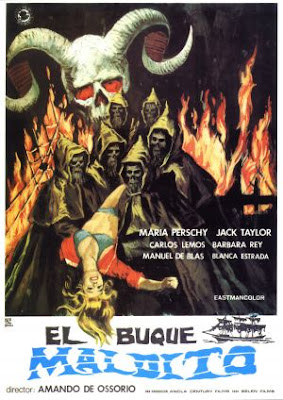 And so, we reach 1974’s ‘El Buque Maldito’, often screened to English-speaking audiences under the hedging-its-bets title ‘Horror of the Zombies’, ‘The Ghost Galleon’, or the slightly more specific ‘Ship of Zombies’.

This third ‘..Blind Dead’ movie, you’d have to admit, has a pretty cool premise. And I’ll bet it already sounded pretty cool when the production team got together to pitch some ideas around for the next Templar movie. “Ok, so how about we set the whole thing out at sea, and the Templars have their own ghostly galleon that emerges from a supernatural fog to prey upon becalmed sailors”, somebody must have said. “That sounds amazing!” the producers or financial backers must have responded, their minds filled with the promise of swashbuckling zombie/pirate action, “let’s do it!” And Amando de Ossorio must have sat back with a deep sigh, and contemplated the practicalities of actually making a workable zombie ghost ship movie on a Spanish b-movie budget. His thoughts must have then turned to the comfort of whatever material rewards the success of his first two movies had brought him, and the fact that his little horror franchise was now sufficiently well-established that whatever garbage he turned out would be distributed to fleapits, drive-ins and the like around the globe in a variety of butchered prints with misleading titles, whether or not it was actually watchable being a moot point.

And he must have just thought well, fuck it, and made an executive decision not to even bother getting out of bed for this movie if he could possibly help it. For, whilst I may have been unfairly snarky about the previous two movies in places, they’re masterpieces compared to this one. (It sure had a great poster though, huh?)

A total failure as a film it may be, but so strange is the manner in which it fails that in it’s own way it’s almost fascinating, a thoroughly lifeless excuse for a zombie caper inexplicably torpedoed by masses upon masses of needless, confusing exposition that almost takes over the movie from the poor old Templars.

Clearly this film’s creators learned nothing from the more surrealistic excesses of ‘70s Euro-horror, as exemplified by their countryman Jess Franco. So you want some girls in bikinis bobbing about in a boat in the middle of the ocean…? Well, JUST PUT THEM THERE, for christ’s sake! Bring the zombies, and we’ll ask questions later. This shit doesn’t have to make sense!

But such wisdom is lost upon de Ossorio and co, who chase their own tails through the whole first half of ‘Horror of..’/’Ghost Galleon’/whatever, trying to explain and legitimise their batty, convoluted storyline, and at the end of all that it STILL doesn’t make much sense. “Yeah, maybe”, I can imagine Amando sneering, “but now I’ve only got forty minutes left to fill and I’ve barely spent a peseta!” Fair enough I suppose. 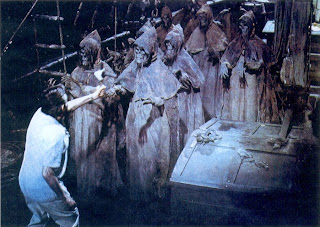 So the plot – and I’m not looking forward to typing all this – centres on a feisty (yes, I’m afraid so) young model, who is trying to break her roommate / best friend into the modelling business, by getting her a contract with an exclusive agency. Roommate vanishes with no prior warning, after dropping hints that she’s landed a big job, and Feisty goes to complain to the head of the agency, and to see what’s up. When she arrives, she runs into this sleazy character who’s apparently some kind of well-known industrial mogul / international playboy type. And so our heroine stomps about petulantly, demanding answers for so long that everybody seems to assume she’s part of the furniture, and they start discussing their sinister, top secret conspiracy regardless of her presence. To wit: her roommate and another model are currently afloat in a motorboat in the middle of the ocean. This is part of an elaborate publicity stunt on behalf of Mr. Mogul, who wishes to reap the benefits of the attendant publicity when two pretty, bikinied girls are daringly rescued whilst modelling his company’s exciting new range of motor-boats! But of course! Makes sense, doesn’t it? Except for… well, except for the fact that it’s about the stupidest thing I ever heard.

Such a ludicrous plot device might have been just about passable if it were mentioned in passing in a more exciting film, but the sheer amount of time this movie spends arsing about with the ins and outs of this guy’s moronic scheme is almost a deliberate insult to the audience’s intelligence, although quite how far you’d have to go to successfully insult the intelligence of a guy who’s watching a bunch of movies about poorly animated skeletons menacing semi-clothed women and then wasting his time writing voluminous tracts about them on the internet, who can say.

Anyway, everybody at Mr. Mogul’s secret HQ seems to be treating this caper with the utmost seriousness, and tempers are frayed when the girls disappear off the radar, and report back by radio to say that they’re immersed in a mysterious fog and are unable to find their way out. Cut to the life-raft, where they’ve also caught sight of a creepy-looking old-timey galleon cleaving out of the fog, and the-girl-who’s-not-the-roommate decides to go and board it in search of help.

Meanwhile, Mogul and Head of Modelling Agency go to consult this science guy working for the coastguard, who initially rubbishes all their baloney about mysterious fogs, but when they mention some specifics on the galleon, he becomes extremely excited, telling them all about the legends of the evil ghost-ship and how he’s dedicated his life to studying its appearances etc. etc. His performance is hilariously OTT, momentarily livening things up. Mogul decides, well, Christ, we’re not getting any sense out of this guy, so I’m going to jump in my yacht to go rescue the girls. Science guy is all like, oh, please, please let me come with you, I’ve been waiting all my life for this moment, and oh, by the way, we’re all DOOMED, and we’ll never return alive. Sure, sure, the more the merrier, says Mogul, and so he, the modelling agency lady, the nutty professor, our feisty heroine and a couple of other characters for luck all set out on the yacht to get this shit sorted out. 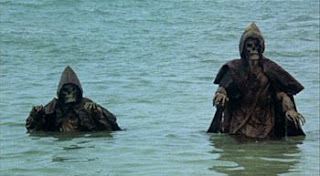 Phew. In a certain sense, I almost respect the laziness Amando de Ossorio demonstrates with regard to every other aspect of this film, but I fear he missed a trick in not just replacing the opening half hour with a title card reading “Right, this is basically a remake of ‘Tombs of the Blind Dead’, ON BOATS.” Indeed, many of the film’s scene set-ups and character relationships seem to be directly recycled from the first movie.

And so it goes on. Sadly, the directorial flair and gleeful morbidity that de Ossorio brought to the proceeding films is nowhere to be seen here, as scene after scene is rendered with fixed camera, poorly focused long shots. Stripped of their horses and their medieval surroundings, the Templars, when they finally emerge, are a shadow of their former selves. With little in the way of interesting editing or atmospheric FX on hand to hide their essentially cheapo nature, their showing here must rank as one of the crappest gangs of cinematic zombies on record as they trundle around listlessly, arms stuck out straight in front of them in a thoroughly silly fashion.

Once everybody is trapped on the galleon, the film takes on a repetitious, Scooby-Doo-like ambience. Very, very slow Scooby-Doo, mind you. Scooby-Doo on ketamine, maybe. On and on it goes, as various combinations of characters traipse back and forth, back and forth across the same three wobbly ghost-ship sets, the whole thing seeming to drag on endlessly to no particularly satisfying conclusion, and indeed no conclusion at all in my case, as, I confess, I fell asleep for real this time, dreaming of unconvincing ghouls forever stalking poorly dubbed, barely recognisable characters across creaky pirate ships, in some self-sustaining nightmare of eternal boredom. This film is so mind-numbingly slow-paced in fact, even during scenes of distasteful, sleazy violence, that in places it feels as if they’re actually trying to make some kind of point about the banality of evil, as aptly demonstrated by the clip below:

There’s a fourth ‘Blind Dead’ film, mystifyingly entitled ‘Night of the Seagulls’ (boy, that’ll really pack ‘em in). Apparently it follows the further adventures of the Templar party-boat, as it comes to shore in a remote fishing village, where, I think it is safe to assume, our errant Knights probably chase around yet another bunch of scantily-clad girls, like the cadaverous Benny Hills they’ve been reduced to.

I’ve not yet seen ‘Night of the Seagulls’. I have no plans to attempt to see it, or to try to track down a copy. But nonetheless, I have no doubt that it's tale will be unfolding in front of my tired eyes before too long, whether I like it or not. Pity me.

Or rather, don’t pity me, it’s my own stupid fault. I could have spent the time trying to come up with something worthwhile about Godard or Louis Malle, or about some genuinely good forgotten masterpiece. But I didn’t. Instead I wrote this, using far more words than is strictly necessary to write a ‘comprehensive’ guide to a four film cycle of dubious merit, despite the fact that I fell asleep halfway through the third film, and didn’t really pay much attention through parts of the second. Perhaps these lapses can themselves be seen as critical judgements, or at least as honest reflection of my own personal engagement with this odd series of films? Clearly I would have been kicked out on my ass had I tried to submit all this to even the most sloppy of print publications, but, such is the glory of the internet age that I can do whatever I like, safe in the knowledge that perhaps four, maybe even five, people will have read this far. And it is they who should truly be pitied. I mean, at least the girl who got tied to a rack and stabbed by a skeleton in ‘Return of the Evil Dead’ hopefully got paid for her troubles.