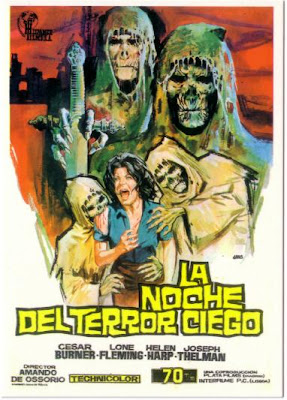 It was a dark moment recently that found me trolling the internet for reviews, to ascertain whether or not the third part of Amando de Ossorio’s ‘Blind Dead’ series was worth watching from a streaming video site. The internet’s consensus was an overwhelming ‘NO’, but, of course, I watched it anyway. Or tried to. More on that later though. Point is, whilst skim-reading write-ups on Imdb or Amazon or somewhere, I noticed that some broadly negative commentator had reluctantly described the first film in the series, 1971’s Tombs of the Blind Dead as “a classic, of a sort”. YES, I thought; what a perfectly concise summation of this particular work, and it's odd appeal. It is not, you see, a film which any but the most mush-brained horror junkie could straightfacedly call “a classic”. But a classic, OF A SORT? Oh man, that just nails it.

You see, in conventional terms, ‘Tombs..’ is clearly not a great film. In fact, it is almost entirely lacking in any of the qualities – such as, say, entertainment value, narrative interest or excitement, cinematic craftsmanship, humour, charm, originality, emotional resonance or the attempt to communicate something meaningful – that a modern cinema-goer may expect of a motion picture.

But, nonetheless, amongst viewers well-versed (‘mired’, if you will) in the world of ‘70s European horror, you’d be hard-pressed to find anyone who does not exhibit a certain fondness for, perhaps even a weird devotion to, ‘Tombs of the Blind Dead’, together with a joyous acceptance of the knowledge that it is our sorry fate to spend time watching the film and all it’s increasingly lame sequels at some stage, whether we actually intend to or not.

Enjoyment of a ‘..Blind Dead’ movie is in fact, I would venture, a crucial “beyond the threshold” moment for any budding fan of this kind of cinema. Previously, you might have been able to kid yourself that you’re just watching this one movie cos Mario Bava directed it, or cos it’s notably crazy or imaginative or funny, or cos of the awesome production design, or because somebody told you it was good. But when de Ossorio’s Templars start strutting their lumbering, bloodthirsty stuff on your fuzzy TV screen, and you find yourself reacting not with disdain or morbid curiosity but with simple, honest-to-god PLEASURE – that my friend is when it’s too late; the grinding, artless machine of lurid Euro-horror is feeding you imagery, and you are happy and comforted by its presence.

Not that ‘Tombs of the Blind Dead’ is terrible by any means. After all, it’s classic, of a sort! By my own warped standards in fact, it’s pretty good. 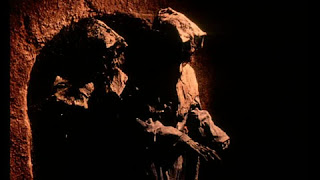 The first thing to note is that in the early ‘70s, Spain did not really have much in the way of a tradition of horror/exploitation filmmaking (well, aside of Jess Franco I guess, but it’s probably wiser to view him as a random lunatic terrorising the wider continent with a movie camera than as a symptom of any local film industry), so ‘Tombs..’ was a pioneering work in it’s own way, and as such it exhibits a kind of naïve, ground level primitivism that’s rarely seen in Western European films.

The human plot-line, such as it is (I’ll be saying “such as it is” and “or something” quite a lot in the reviews that follow, so try not to let the repetition bother you), revolves around some models and their boyfriends, who are fed up with lounging around in bikinis in Madrid or wherever, and head off to… some other place I suppose, on the train. During the journey, one of our heroines gets very upset at some kind of adulterous shenanigans going on between the other characters, and jumps off the train when it stops at a signal in the middle of the countryside, stomping off into the wilderness to make her own way home. Naturally it’s an evil, abandoned part of the countryside that causes the superstitious train crew to shudder and cross themselves and refuse to get off and chase after her…. but c’mon, you knew that already.

And if you’re thinking that maybe Girl # 1 finds her way to the ruins of a medieval monastery where she takes shelter for the night, and if you suspect there are a lot of creepy tombs with weird inscriptions, well right again!

I’ll bet you also know that her pals all sit around at their destination feeling guilty after her mutilated body is subsequently discovered on the train tracks the next morning, and that they do some research on the monastery, pick up some cronies and go back there to investigate. And from thereon in it’s all gravy. 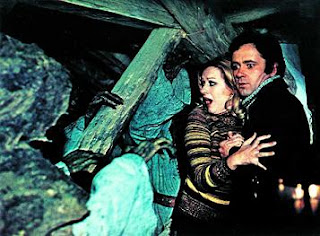 The idea and execution of the undead Templars is, even a cheap Spanish horror-hating cynic would have to admit, pretty cool. At some stage, the various forces behind this film must have got together and thought, ok, horror – so, shall we make a Dracula movie, or a Frankenstein movie, or what? And they must have decided, no, let’s do something new, something that reflects our national culture. Given the terminally derivative state of horror/b-movie culture, this is a decision you’ve got to applaud, regardless of your thoughts on the results. Ok, so in practice they’re essentially zombies, but at least they’re slightly different zombies.

During my final year studying history at university, I specialised in the Later Crusades, so as it happens I know (or at least think I know – it’s all buried somewhere in the back of my brain) a bit about the historical Knights Templar, vis-a-vis their withdrawal from active duty as interest in crusading waned during the 14th century, and their eventual, notorious persecution and ‘trial’ at the hands of Philip IV of France and the politically compromised Pope Clement V. Word to the wise is that effectively the accusations levelled against the Templars were abject nonsense, and Philip stitched them up in order to steal their land and other assets for the French crown, using the bad reputation that had surrounded the Order since they were rumoured to have deserted their Christian brethren during the fall of the Holy Land as the excuse he needed. But nonetheless, the imaginatively grotesque variety of blasphemies attributed to the Templars by their accusers (they were said to have worshipped Satan by kissing the ass of a giant black cat, to have indulged in sodomy and eaten the flesh of children etc etc.) live on in infamy, imbuing the Order of the Temple with a fame and a position in popular culture and conspiracy theory that lives on to this day, as witnessed by the likes of The Divinci Code, etc.

Not that you are liable to learn much about this from watching ‘Tombs of the Blind Dead’ however, largely because the script seems to have been written by a caveman. I don’t know whether or not legends of vengeful Templars emerging from the grave hold much of a place in Spanish folk culture, but let’s assume they do, because the film seems to expect that viewers will know what the hell is going on, much as vampire films assume you already ‘know the rules’. Which is just as well, as I wouldn’t relish getting a lengthy history lesson from any of the wooden, monotonal characters in this picture. Inevitably there’s a brief section in which Girl#1’s friends consult a rambling old professor before undertaking their journey back to the monastery, but it’s handled pretty painlessly, and that’s yer lot.

Say what you like about the rest of the film though – the Templars themselves are AWESOME, rising from their graves in mossy skeletal form clad in rotting cowls and armour, rearing up on their black-shrouded, zombie horses and setting out for blood. (What, did they bury them with their horses? – no fool, they’re summoned by evil magic , or something!) 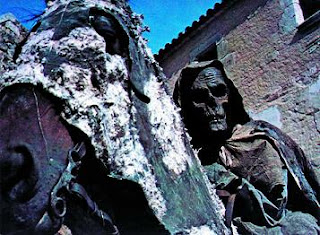 The sound design is amazing throughout the film actually. Speaking as someone who is always trying to find some good horror movie atmos to sample for musical projects and mix CDs, ‘Tombs..’ provides a motherlode of thoroughly creepy, music-free sequences filled with FX-laden creaks, footsteps, metal-on-stone scrapes, cackling monster-chatter and aforementioned chanting – I swear, I’ve grabbed about twenty minutes worth of ‘needle drops’ from this movie. For instance, there’s this one bit where I think one of the characters is being hunted down by the Templars whilst another dozes off listening to kinda light jazz musak on a portable radio, and there’s a moment where character #1’s bloodcurdling scream hits just as the scene changes, and blends into a crescendo in the radio music, creating an amazing sort of “BLLLLEEEEEEURUUURGHHHDiddle-de-dee” sound. So cool.

Anyway, sound-geekery aside, my point is, unlike much of the rest of the film, somebody really put a lot of effort into these Templar sequences, and it paid off – they’re superbly effective, even letting you temporarily forget that you’re still watching a movie that essentially relies on shots of semi-clothed models slowly backing away from the camera in ‘fear’ as technicians wave some groping, disembodied skellington arms in front of the lens. Because that’s what seems to happens next, time after time, with minor variations throughout all these movies. 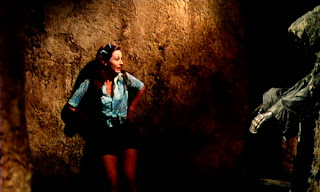 The other thing that’s awesome about this movie is the ending. And I’m gonna talk about it, so if you’re don’t want it spoiled, look away now and I’ll join you again at the start of the next review. Ok? Good.

Basically, our final girl finds herself fleeing across the fields with the Templars in hot pursuit as the dawn breaks. Suddenly it’s daytime, and she’s found her way back to the railway line, where a passing train stops so that the concerned crew can take her onboard. Which is how a movie like this ends, of course. We’ve been watching the damn thing for 80+ minutes, and now the sun is out, the eerie atmosphere has vanished and she’s back amongst her fellow humans in the civilised world, scarred by the memory of her ordeal. Roll credits, right? Well, WRONG, as it happens, cos here the Templars ride on over the hill, board the train and proceed to kill everyone, before presumably truckin’ off to the bright lights of the big city to cause further havoc! One of the film’s final shots is of a screaming child splattered with the blood of her slaughtered parents! Holy fucking shit! 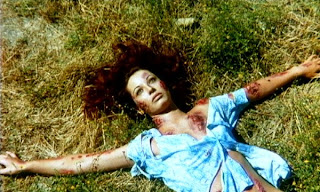 Now, I don’t know how you would be apt to respond to such a sequence dear reader, but, jaded punk that I am, I think at this point I probably leapt from my seat, punched the air and exclaimed “awesome! I love this movie!”, or words to that effect. As a total demolition of horror movie convention, it is gleefully, crudely, obviously perfect.

Your description of the ending alone is enough to make me want to see this. (Though the description "the script seems to have been written by a caveman got me oddly interested.) And "A classic, of a sort" is such a useful formulation that I'm going to be using it for pretty much everything from now on.

I just added a Youtube video to the post featuring the whole of the ending sequence... it doesn't go down exactly as I remembered it, but it's just as impressively grim. I'd completely forgotten that they actually reach a station!

Oh, and the 'caveman' comment was just my glib way of saying that dialogue and plot development are pretty rudimentary, and certainly there's not much in the way of historical background to get in the way of all the stalking and killing, etc.