Part #2: Templars On The Town 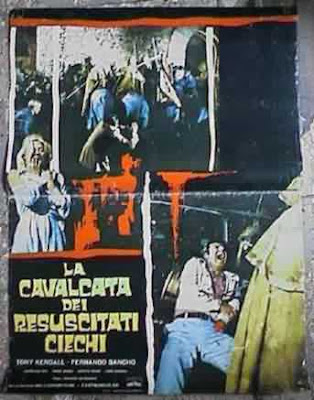 Clearly I’m far from the only one who thought ‘Tombs of the Blind Dead’ has a certain something, as apparently it cleaned up at the box office on it’s original release to such an extent that de Ossorio was straight back in ’73 with a bigger budget (relatively speaking..) for a more ambitious sequel that cast it’s net wide in an attempt to overcome the backwoods simplicity of it’s predecessor. All the Blind Dead films have been lumbered with about ten alternate titles, so it’s probably not worth speculating as to why this one is most widely known as Return of the Evil Dead in the English-speaking world, a decade too early to have cashed in Sam Raimi’s series. It seems somebody out there liked giving these movies needlessly vague, catch-all English titles, despite the hook provided by the cool and distinctive ‘Blind Dead’ moniker. I’m sure they had their reasons.

Regardless, ‘Return..’ sees de Ossario trying his hand at a variety of contemporary horror tropes, with decidedly mixed results. First off, he gives us more history this time around, beginning with a couple of impressively garish and gruesome medieval flashback sequences, allowing for some prime historical sadism much in the spirit of Michael Armstrong’s ‘Mask of the Devil’ (1970), as we get to see a lively example of what the living Templars used to get up to behind closed doors, and also bear witness to the local flaming torch-wielding mob’s decision to burn out their eyes before staking them, that they may be blind before god and unable to find their way back from hell. Good luck with that!

(Funnily enough, the similarities to the Armstrong film are perhaps more than coincidental, as it seems the first two ‘Blind Dead’ movies were actually released in America at some point as ‘Mask of the Devil’ parts IV and V, despite having almost nothing else in common with said British/German witchhunter movie; quite what unlucky motion pictures masqueraded as parts II and III, god knows. It’s hard to take any of this seriously though once you consider that apparently somebody once gave ‘Tombs..’ an outing as ‘Return to Planet Ape’! Please tell me that was just a case of some mixed up film cans...) 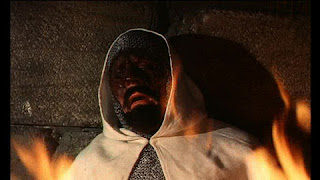 Anyway, after this promisingly gnarly opening, the action moves to the present day and promptly stops resembling anything that could remotely be called ‘action’, as a bunch of characters and plotlines are introduced, each more tedious, inconsequential and poorly executed than the last. Maybe the lifeless English dubbing on my copy is to blame to a certain extent, but the exposition/human interest scenes in this movie are just excruciatingly bad, and just seem to go on, and on, and on.

In brief though, it seems that ownership of the Templar monastery has fallen into the hands of some foolish city folks who want to restore it as a tourist attraction, or a hotel, or something. The monastery now seems to be in the vicinity of a small town, where the locals have a big celebration every year to commemorate their ancestors’ success in blinding/killing the knights. Quite how this squares up with the fact that the monastery was stuck in the middle of wilderness where nobody dared set foot in the first movie, who knows, but then I guess since that film ended with the Templars all steaming off to enjoy some bloody hi-jinks in Madrid or wherever, it’s probably best not to dwell on such details.

And so there is much toing and froing between the guy with the hotel scheme and the local mobster-affiliated bigwigs for us to sit through, and there’s also this other plotline about this sinister freakish/retarded/whatever guy (I know, I know… but whatcha gonna do?) who seems to be the caretaker of the local church (shades of ‘Dracula Has Risen From The Grave’ there maybe?). He meets a preeeetty lady from the city who rescues him from a bunch of ignorant locals who are giving him a hard time, and as a result he does what comes naturally to any young chap who’s just met a pretty lady, and heads down to the creepy cemetery to unleash the power of the undead Knights Templar in the mistaken belief that they’ll give him some sort of power or dignity, or something. Or, no, actually I think maybe he spies on the lady making out with some guy in the graveyard, and unleashes the Templars in anger? Or maybe the Templars just turn up for the hell of it? I don’t know. I definitely remember there was a really boring non-sex scene in the graveyard. I suspect I may have fallen asleep for a bit. And why not, eh? It’s not like anyone’s paying me to memorise the plot details of stupid movies just to I can summarise them for your benefit, y’know. 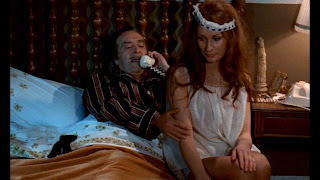 Anyway, one way or another, the Templars are back, and as you might expect things subsequently pick up a bit with a few scenes taken directly from the playbook of the first movie, as our boney chums get straight off to business, besieging the house of a woman who’s busy cheating on her husband with some swarthy, moustachioed fella. In places things are just as atmospheric as the first movie, and the scene where the Templars are shown lumbering through a modern dwelling for the first time, slowly closing in on their screaming victim accompanied by an incredibly sinister monotone synthesizer hum, is genuinely nightmarish, prompting a psychotronic disjuncture of filmic reality, as the normality-up-to-this-point of the movie is subjected to a relentlessly inept descent into brooding, tacky, bizarro monster-vision. The filmmakers seem to imply that the lady is being punished for her adulterous ways, but more out of automatic, Hammer-derived habit than in order to make any particular puritanical/misogynistic point. Mindless, artless horror trudge at its grinding, unsettling best. And strangely enough, she even survives, copping a trick directly from one of the proagonists of the first film, as she steals a zombie-horse and gallops off to warn the other characters. I guess that’s about as close as a ‘Blind Dead’ movie gets to feminism.You go girl!

Also great is the scene where the night-watchman in this glass-fronted [gatehouse? barracks? Train depot? – whatever] watches in horror as the Templar army crests the hill in front of him for a full slo-mo battle-charge, picking up the phone to put a classic “uh, boss, you’re not gonna believe this, but..” phonecall through to the town’s corrupt mayor before they break through the glass. 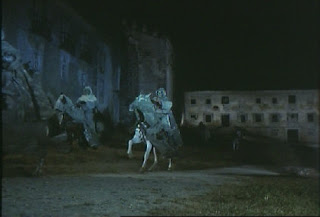 Of course, the reason these few characters were off on their own and subject to early attack is that everybody else is off in the town centre, celebrating the 500th anniversary of the Templars’ demise with a big party (I know historically speaking it should be more like the six-hundred-and-somethingth anniversary, but by this stage who cares?). So naturally it’s only a matter of time before the Templars arrive, ploughing straight into the middle of the festivities and doing their best to – yes, you guessed it - kill everyone. Let it be said that, regardless of what crummy movie they may end up in, I like the way these guys do business. No poncing around in the shadows pursuing mysterious, occult ends or marching back and forth brainlessly for these filmic fiends! No, they just want to fucking kill you, and everyone else, as quickly as possible please, no more no less. I seem to remember in ‘Tombs..’ there was a suggestion that they seemed to like chewing on young ladies flesh in order to vampirically sustain their unholy existence, but that seems to have largely gone out of the window here.

Some of the more heroic partygoers fight back against the attackers with pitchforks and dynamite(!), and disappointingly they even achieve some success against the previously implacable menace, but they’re outmanoeuvred and, um, out-eviled I suppose, by their undead assailants, and so mismatched bunch of surviving characters eventually make a getaway, zooming off in, hilariously, a little mini-moke-styled red buggy thing, to hide out in the church. From thereon in, the film becomes a rather lapsidaisical homage to ‘Night of the Living Dead’, as the characters hang around inside bickering and the Templars lurk outside like morbidly decorative gateposts, offering little in the way of threat or narrative momentum as they wait for the living folks to emerge. And inevitably, they’re picked off one by one thanks to their own idiocy or greed. You know the score. 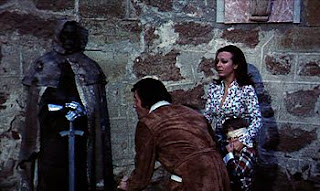 This being the ‘70s though, you’ve got to love the way the men all strut about in donkey jackets smoking an endless succession of cigars and smirking all the time, leaving the women to sit around and fret about how, y’know, they’re all stuck in a medieval church surrounded by murderous zombie knights. There are a few really effective moments in this section of the film, and the greedy mayor’s grizzly demise is particularly enjoyable, but basically things grind to a halt leading up to a disappointingly lame cop-out ending. In fact, the whole NOTLD set-up exemplifies the odd inconsistency that seems to typify de Ossorio’s direction throughout these films, as 10% exciting, intelligently staged Templar-attack is married to 90% plodding, pointless TV soap stuff. Still, all in all, ‘Return of the Evil Dead’ makes for an entertainingly goofy, catch-all ‘70s horror with some memorable moments, if you can make it through the patches of abject tedium.