The Hound of The Baskervilles
(Terrence Fisher, 1959) 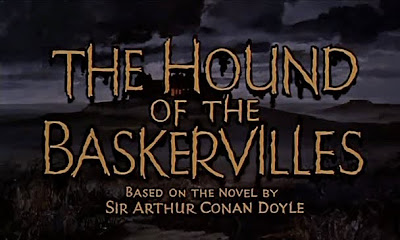 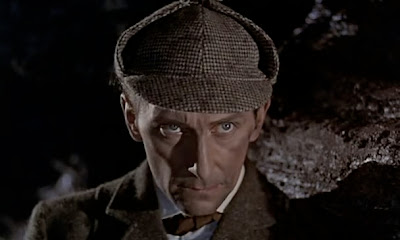 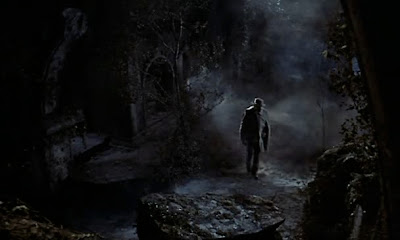 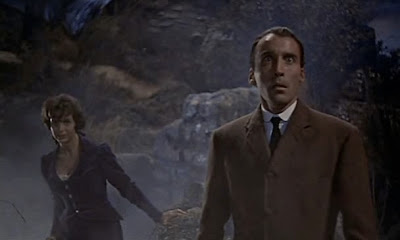 Oh, what a treat. Perhaps unfairly neglected in the Hammer canon due to its nominal non-horror status, what could be better cinematic comfort food than this? Peter Cushing and Andre Morell portraying Holmes and Watson so definitively that I think they were occupying the characters in my mind long before I saw the film, and Christopher Lee essaying precisely the kind of role he's best at, the pompous and ineffectual Sir Henry Baskerville. John Le Mesurier is Barrymore the family retainer, world class ham Francis De Wolfe is Dr Mortimer, Ealing regular Miles Malleson is the doddering old bishop, and the cast is rounded out with a veritable coachload of other second string character actors, not a Bland Young Man amongst them. Even Italian actress Marla Landi gives it her best shot, adding a welcome dose of vengeful craziness to her role as the token pretty girl.

Everybody seems to be having a lovely time, and to be honest, when scheming gentleman farmer Ewen Solon invites the occupants of Baskerville Hall round to his place for dinner, I was sad that the damned plot got in the way, denying us a scene in which everybody sits around his rustic table, having a good laugh over a flagon or two of cider. Why can’t they all just get along?

But intervene the plot must, and whilst I’m unable to pass comment on the extent to which this is a faithful adaptation of the story (never bothered reading Conan Doyle to be honest), it’s certainly a good script from Peter Bryan – sharp, characterful and well-paced as you could hope for from a bit of 50s/60s b-movie hokum, exemplifying all the virtues of ‘quality’ held dear by partisans of Hammer’s pre-’66 output. As might well be expected, Fisher’s direction follows suit, and after the groundbreaking success of their recent Frankenstein and Dracula movies the studio clearly made no bones about playing this one about as close to a gothic horror as was humanly possible, incorporating strong scenes of villainy and bloodletting (not to mention a memorable set-piece that sees Lee menaced by a tarantula) that seem mild today but must have been fairly startling back in ’59.

Above all here, the production design is absolutely suburb, the eerie fog-strewn moors, the abandoned chapel and the underground caverns all contributing some of the most richly atmospheric backdrops ever seen in a Hammer picture, the autumnal cinematography looking better than ever, with subtle deployment of blue and green lighting amid the deep brown n’ black raising the film’s exterior sequences to a level approaching that of Bava’s early ‘60s masterpieces or the first half of Hammer’s own ‘Brides of Dracula’ - a definitive piece of technicolor gothic.

I’m not one of those who insists that Hammer’s Bray-era output was automatically superior to their subsequent releases, but still, it’s sad that the ubiquity of some of their later, sillier efforts tends to leave superb, low-key films like this one in the shadows. Should you ever need an example of all the more refined characteristics that stuffier Hammer-heads maintain the studio lost amid their embrace of flares, boobs, dinosaurs and shoddy methods of killing vampires, ‘..Baskervilles’ is the one to go for.

I might have to add this one to my shopping list, being a huge fan of both Conan Doyle and Hammer.

Well if you do, I hope you enjoy it! I've got a tendency to oversell these things in reviews sometimes...

On the negative side, I guess many people might find it a pretty dated and stagey sort of film, but.. I kinda like that.