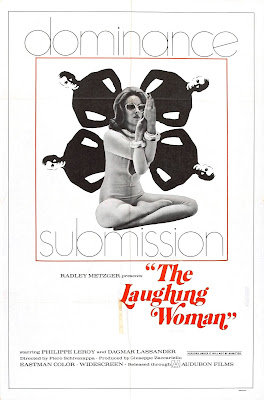 If there’s one thing I always appreciate, it’s a movie that completely fucks with audience expectations. I loved it in Larry Cohen's Bone, I loved it in Joseph Losey’s filmography, and, most recently, I loved it in writer/director Piero Schivazappa’s frankly bizarre 1969 thriller, which for ease of reference we’ll refer to as ‘The Frightened Woman’.

Regardless, I remember reading a few reviews when Shameless released their restored version a couple of years back, and whilst I thought some of the screen-shots looked kinda interesting, I figured it might not be quite my sorta thing. Based on the inevitable one line synopsis - rich misogynist maniac kidnaps a woman and subjects her to a series of devious torments - it’s easy to imagine a film that will settle comfortably into one of several fairly obvious blueprints – either a straight up, Hitchcock-via-giallo style ‘woman in peril’ flick, or a slightly more elaborate ‘Most Dangerous Game’ style cat n’ mouse suspense movie. Which could be cool, but y’know… the idea doesn’t really appeal to me much, so I probably wouldn’t go outta my way, etc.

Thankfully though, I was lucky enough to find the film very much IN my way when I caught it a few months back as part of a double-bill presented by London’s Filmbar 70 as part of the Scala Forever season. I was mainly there for Lucio Fulci’s Don’t Torture a Duckling, and, impressive though that film is, to my surprise it was ‘The Frightened Woman’ that really blew me away. 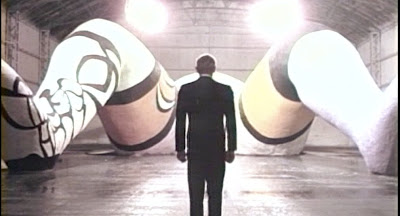 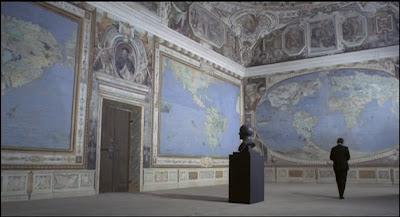 The first thing that strikes one as unusual here I think is the relative extravagance of the production values. The opening scenes set in the ‘charitable foundation’ owned by Dr Sayer (Philippe Leroy, the kind of not-quite-famous but hellishly prolific actor whom you’re sure to recognise from *something*) take place inside an astonishingly impressive building of obvious antiquity, and the (presumably) purpose built sets that compose his private mansion/torture labyrinth exhibit a consistently eye-boggling approach to interior décor that stands up to the wildest fantasias offered by Schivazappa’s more securely financed contemporaries. In fact, despite its titillating subject matter ‘The Frightened Woman’ is really more reminiscent of the work of post-Fellini directors like Elio Petri than it is of common or garden horror/giallo fare (and personally I found it more enjoyable than Petri’s ostensibly similar The 10th Victim).

(I’d love to hear some stories about the various scams and lucky coincidences that must have led the ‘The Frightened Woman’s production team to the gloriously eccentric range of locations and vehicles utilised in the film, from the aforementioned foundation building and the aircraft hanger-sized ‘Femina Ridens’ sculpture itself, to the medieval coastal fort (I could be wrong, but I think it’s the same location used in Herzog’s ‘Cobra Verde’?), to the prototype aquatic car and the vintage steam locomotive…)

The next thing you’ll notice about ‘The Frightened Woman’ is that it boasts a free-associating, faux-intellectual script to match the visuals. When Dr Sayer first meets foundation press officer Maria (Dagmar Lassander, from more awesome Italian horror flicks than I could comfortably list within these brackets), a connection between the two is initially established though a heated disagreement about the relative merits of a scheme to curb global population growth by promoting male sterilization in India. Maria is very much in favour of the idea, arguing that such a measure would not be an unreasonable step for a man who already has two or three children, and that it would greatly improve quality of life for married women in developing countries. Dr Sayer however is violently opposed, insisting that “it is essential that the fertility of the man should remain absolutely intact!”. Say whatcha like about scripting in Italian exploitation movies, but you don’t tend to get character introductions like that in ‘Strip Nude For Your Killer’. 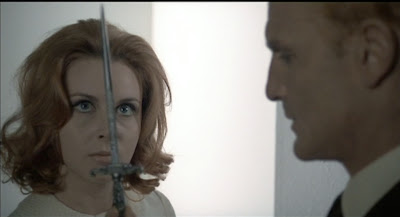 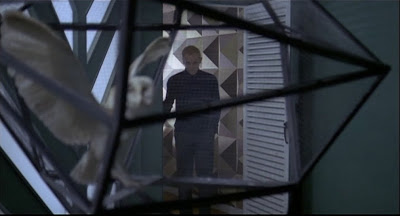 When Maria subsequently visits Dr Sayer at his working week bachelor pad (annoyingly, the good doctor goes through this whole movie without being assigned a christian name), ostensibly to collect some files to assist her in writing her report on the sterilization thing, her attention swiftly turns to the unsettling art he has on display. Paintings by an eccentric monk, Sayer explains, based on microscope slides of various types of infectious bacteria – bubonic plague, leprosy etc. - revealing the aesthetic beauty at the heart of pestilence and death. 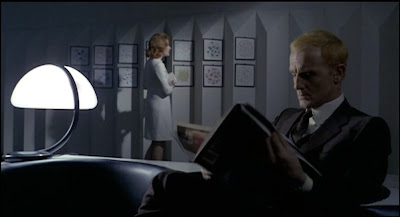 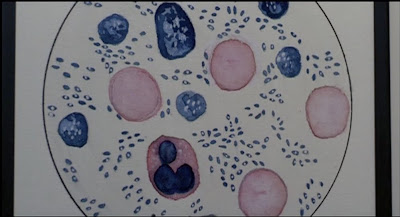 Overblown and showy as such digressions may seem out of context, it’s hard to deny that they fit the film’s exuberant visual style perfectly. Nonetheless though, things from here progress more or less as one would expect, as Sayer drugs Maria’s scotch on the rocks (and as an aside, doesn’t it warm your heart when all visitors to a character’s home in movies are immediately offered whisky, regardless of context? – damn us real-world people and our stupid ‘cups of tea’), and stows her prone form in his Merc, motoring off to his purpose-built pop-art labyrinth, there to spend the weekend subjecting her to various unimaginable cruelties, culminating in her death. As Sayer explains at some length after Maria awakes in chains, he is a connoisseur of female fear, a man who drinks in the heights of womanly terror as if it were the finest wine, believing it to be the highest possible form of art and so on and so forth. Conveniently, he also believes that all women are party to a grand conspiracy to achieve global dominance, achieving social and sexual self-sufficiency and reducing men to a state of servitude. How about that!

In short, some of the bits that follow in the next 45 minutes are pretty cool, some are completely ridiculous, and many are a happy mixture of the two. In terms of uhinged discomfort, special mention should be made of the scene in which Sayer forces Maria to ‘make love’ to a rubber mannequin of himself as he looks on giving orders (“you won’t be able to destroy him as you have other men!”), and the bit where he forces her to clean and massage his feet (“harder I say, have you no strength in your arms?”).

In view of the psychological profile we’ve established for him so far, it should come as little surprise that Sayer has a bit of a ‘Crimson Executioner’ thing going on, endlessly working out, grooming himself and reveling in his own perfect physical ‘perfection’ (an effect Leroy conveys far more convincingly than ol’ Mickey Hargitay, it must be said), in between his extended bursts of leering sadism. 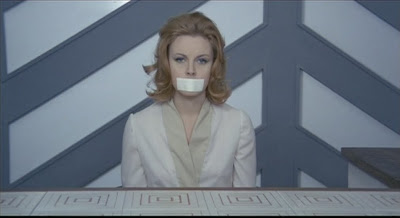 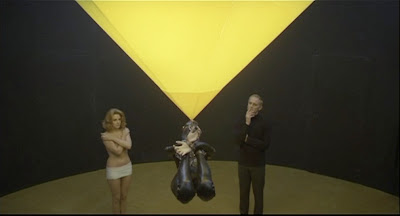 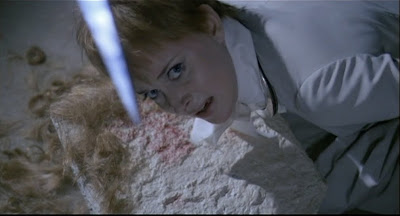 For viewers less than enthralled by the petty sub/dom cruelties and faux-psychological yakking of this kind of horseplay, things do start to get a bit draggy after a while, but thankfully there are also plenty of jaw-dropping Italio-kitsch setpieces thrown in for us to enjoy along the way – none more so than the astonishing sequence in which Lassander dances ‘round the mod-tastic living room dressed in flimsy surgical bandages whilst swigging from a tall glass of J&B, accompanied by the authentically fucking awesome sounds of Stelvio Cipriani’s ‘Sophisticated Shake’.

In fact, could anything possibly BE more Italio-kitsch..? You tell me.

As the incongruous frivolity of sequences like this one aptly demonstrates, Schivazappa’s film manages to maintain a pleasing level of ambiguity through the potential tedium and sleaze of its ‘trapped woman’ segments, never quite allowing the two characters to settle into an easy aggressor/victim dynamic, always hinting at the possibility that their respective game-plans are quite different from those we might have expected. For all his whacked out diatribes and ubermensch sexual fantasies, Sayer never seems quite the steely, commanding presence that he’d clearly like to be – Leroy’s face conveys a certain doe-eyed fragility that seems to undermine his character’s determination, and the brief hesitations before he meets Maria’s gaze are telling. And Maria, for her part, seems to be step up to the challenges of her unenviable situation with a lot more enthusiasm than we might have anticipated – gunning for her survival by tackling Sayer’s psychological hang-ups head on, happily trying to seduce him through flattery in an attempt to form a healthy bond between them, seemingly in the hope that a bit of human warmth will force all that elitest/misogynist claptrap from his mind, or else just knock him sufficiently off guard that she might be able to make her escape. (“You don’t have to torture and kill to satisfy your sadistic desires… there are other techniques which are just as enjoyable..”, she offers optimistically. )

Despite his visual exuberance, Schivazappa’s direction is often very precise and economical. It’s a questionable point I guess – many would no doubt write off his approach here as garish and gross – but to me he seems like a director who enjoys crafting images that carry a subtle, self-reflexive absurdity, if you look at them from the right angle. Witness the slow pan up the length of a poorly executed bust of Dr. Sayer in one of the early scenes in the foundation building, or the later shots of him silently working out in his weird, shoddy looking gymnasium. As much as the script up until this point might lead us to view the doctor as an implacable, menacing figure, it’s hard not to read into these scenes a certain quiet mockery of his obvious self-delusion. 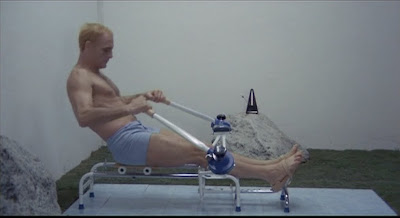 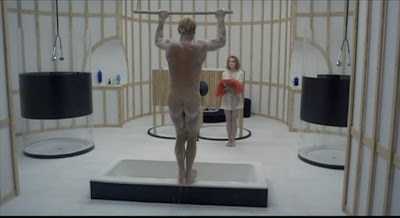 So far so good, but it’s in its final half hour that ‘Frightened Woman’ really goes off the rails.

So what exactly happens in the final half hour?

Well, uh, it’s hard to say really, without giving too much away. Basically, this happens: 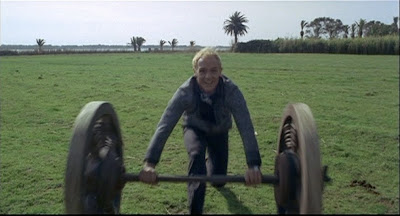 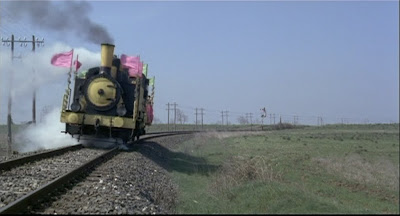 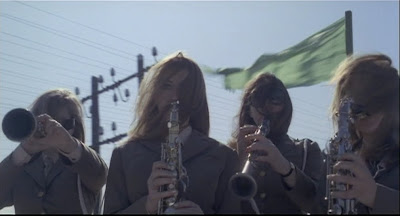 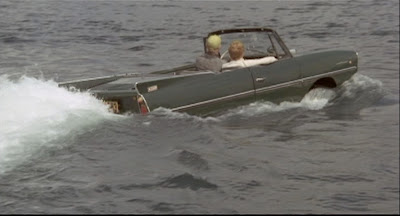 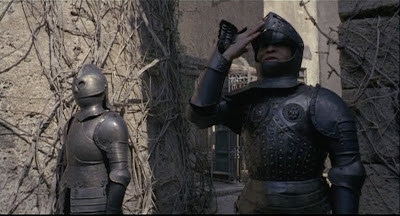 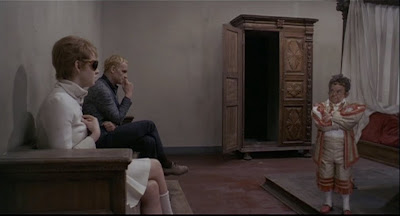 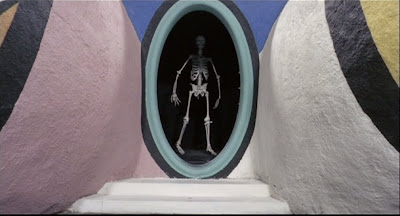 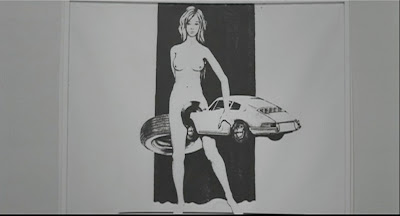 The surprise ending, when it eventually hoves into views, probably wouldn’t be that much of a surprise to any reasonably alert viewer, were it not for the fact that we’ve just been bludgeoned with such a such a succession of hilarious and inexplicable imagery in the preceding twenty minutes that literally anything could happen next and we wouldn’t be surprised, thus making the relatively linear logic of what does eventually transpire into, well, something of a surprise. A happy one, I hope.

And there you have it. It would probably be a bit of a stretch to hail ‘The Frightened Woman’ as a ‘lost masterpiece’ or somesuch. After all, once we get our heads back together after all the craziness, we can probably cough awkwardly and adjust our ties, and soberly agree that it’s actually a bit awkwardly paced and somewhat draggy, and that it explores some of its ideas in a rather tacky and overbearing fashion. Within the rather conservative context of Italian pop cinema though, it’s certainly hard to fault Schivazappa’s originality and ambition, or to deny that he emerged, for better or worse, with a pretty unique piece of work. Personally, I enjoyed the hell out of it. Maybe you won’t, but if you’re a fan of giallo or ‘60s pop art movies or oddball European cinema in general, you could certainly do worse than give it a shot after a few drinks on a Friday night.

Incredibly bizarre film, but I loved it.