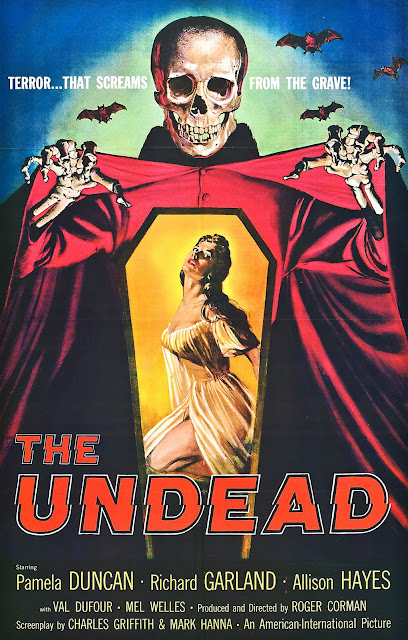 More bona fide Roger Corman weirdness here, with what I think must rank as by far the strangest – certainly most unconventional – film he turned in during his black & white double feature years at AIP.

These days, I suspect the film itself is far less widely seen than its striking (if somewhat misleading) poster design… and perhaps for good reason, as, make no mistake, ‘The Undead’ is some real oddball shit. A curious mish-mash of ideas that never really coalesces into anything terribly appealing, but is nevertheless noteworthy, not just for its sheer strangeness, but for the way in which it strongly prefigures most of the themes and aesthetic fixations that would come to define Corman’s directorial career over the following decade.

We know we’re in for something a bit different right away here, as the film opens with a brief introduction from no less a personage than The Devil himself. As embodied here by actor Richard Devon, Satan sports a neat black goatee, a Robin Hood hat and wields some kind of bloody great trident thing. “Behold the subtle working of my talents,” he declares “and pray that I may never turn my interest… upon you”, before bidding us farewell with an outrageous theatrical guffaw.

Once that’s over with, we find ourselves in the spooky, mist-shrouded exterior of the ‘American Institute of Psychical Research’, where Dr Quintus Ratcliff (Val Dufour), whose appearance and mannerisms remind me somewhat of Twin Peaks’ Agent Cooper, is escorting a lady - Diana, played by Pamela Duncan - inside to meet the unassuming Professor Olinger (Maurice Manson), who appears to be the boss of the whole outfit. [Special thanks to IMDB for helping me to get through that paragraph in one piece.]

As it transpires, Ratcliff is a former student of the Professor who has just returned from Nepal (hey, makes a change from Tibet), where he has been hanging about with some Yogis and mastering all kinds of whiz-bang techniques that (he claims) are sure to revolutionise the way that the American Institute of Psychical Research does business. Diana, it is strongly implied in non-production code busting fashion, is merely a hooker he has picked up on his way over. (The two men make various derogatory remarks about her low intelligence and corresponding susceptibility to hypnosis etc, all whilst she is clearly within earshot.)

Anyway, it seems that Ratcliff intends to put Diana into a 48 hour trance state, wherein he will attempt to prove his theories regarding reincarnation and so forth by allowing her consciousness to regress straight through to her past lives.

Now, as I recall, William Hurt had to ingest massive quantities of psychoactive drugs in order to achieve this in Ken Russell’s ‘Altered States’ a few decades later, so Ratcliff must really be some real hot shit, because he manages to get Diana over the wall with little more than a few hand gestures and a bit of the old “you are feeling sleepy..” type patter.

From this point onward, we leave faux-Agent Cooper and the American Psychical Society far behind, as we journey back to a gothic fairy-tale version of medieval Europe, where Diana’s distant ancestor Helene is locked up in ‘The Tower of Death’, facing execution at dawn – by decapitation, no less - on a charge of witchcraft.

After a bit of good advice from the disembodied voice of her 20th century descendent however, Helene manages to clobber her gaoler with a chain and make her getaway. Subsequent to this, we are gradually introduced to a wider cast of spectacularly annoying medieval characters, including a painfully unamusing “bewitched” gravedigger named Smolkin (Mel Welles), a standard issue knight in shining armour (Richard Garland), a proper, no-messing-around pantomime witch (Dorothy Neumann, rocking some of the worst ‘warty nose’ make-up ever seen on screen), and, most pleasingly, Livia (Allison Hayes of ‘Attack of the 50 Foot Woman’ fame), a hella intimidating, shape-shifting femme fatale of a Bad Witch, whose ‘sinful curves’ are displayed to fine advantage by the faux-medieval equivalent of a slinky little one piece number.

Upping the ‘medieval weirdness’ quotient considerably, Livia travels everywhere with some kind of perpetually cackling imp/familiar type creature that I’m going to assume must be played by an actual adult person of small stature, because the alternative possibilities are too weird/horrid to contemplate.(1)

The pair frequently transform into bats (fake, unconvincing ones), cats (real ones) and sometimes mice or spiders (could go either way). This is achieved by means of a sparkler-aided variation on the old ‘Bewitched’ style jump cut effect (which, as Saxana proved, never gets old). Naturally, Livia and her imp are up to their necks in some high level scheming, primarily aimed at ensuring Helene does indeed get executed as a witch, thus allowing Livia to steal the hunky knight-in-shining-armour guy from her.

And, if you’re wondering by this point where the hell all this is going, the answer is… nowhere fast. Whilst ‘The Undead’s heavily atmospheric, overtly fantastical take on a medieval setting – half Edgar Allan Poe, half ‘Wizard of Oz’ – clearly sets the stage for aesthetic sensibility Corman would go on to develop in his epochal Price/Poe films a few years later (and more specifically, the strain of heavily stylised medievalism that fed into both his ’62 remake of ‘Tower of London’ and the extraordinary ‘Masque of the Red Death’ in ’64), ‘The Undead’ is early doors for the director’s exploration of this sort of material, and there is an overriding “horribly misguided community theatre production” vibe to these fairy tale scenes that soon begins to grate. (2)

Indeed, as these tiresome, pantomime-like characters proceed to faff about to no great effect, belting out the charmless cod-Shakespearian dialogue of Charles Griffiths’ script as if they were delivering it to an gymnasium full of noisy school kids, it was only my slack-jawed disbelief at the sheer strangeness of ‘The Undead’ that kept me going at some points.

It is just as well then that the movie’s final act sees things getting even stranger, as, back in the 20th century, Dr Ratcliff suddenly becomes concerned that his meddling with past life regression might have brought about a bunch of temporal paradoxes or something. This leads him to decide that he must follow Diana’s spirit back into the past to set things straight. Achieving this through means that are never really made clear to us, the good doctor arrives in the middle ages naked, Terminator style, and swiftly steals a set of clothes from a passing knight before setting off to track down Diana/Helene.

Shortly thereafter, most of the characters attend a Black Mass(!) in a cemetery, presided over by the Robin Hood-hatted Satan. He is keen on gathering signatures for his black book, and, in return, he hands a big bag of money to some old geezer who complains he’s led a wretched life, and cures Dick Miller’s leprosy (hurray!).

In a scene that must have looked absolutely superb during the fuzzed-out UHF TV broadcasts through which I’d imagine this movie was primarily viewed for many years following its theatrical release, three female dancers in appropriately charnel garb provide the entertainment at this infernal knees-up, swaying and swirling like otherworldly gothic swamp creatures with polystyrene gravestones behind them, before they disappear in a cloud of smoke.

Elsewhere, a couple of people get their heads cut off, Lavinia gets rather gorily stabbed for her trouble and there’s a ‘knock down, drag out’ fight between the doctor and ‘Gobbo, the Jailer’ – all of which helped ensure that ‘The Undead’ was actually refused a certificate by the British Board of Film Censors in 1957.

Thereafter, some deals are done and some conflicts resolved, Satan gets the last laugh, as well he should, and… I dunno, what more can I tell you? A quintessential “what the fuck did I just watch?!” sort of picture, ‘The Undead’ seems to have been specifically designed to leave inebriated late night TV viewers waking up the next morning wondering whether or not they dreamed it. But let me tell you friends, I watched it relatively early in the day, whilst sober, and I can assure you – it is absolutely real.

As well as providing an early demonstration of Corman’s interest in gothic/medieval settings, ‘The Undead’ also touches upon his quasi-bohemian interest in new age psychology and mysticism, and his penchant for disorientating his viewers by flinging them across time and space (something that reoccurs not just in his late ‘60s “psychedelic” movies but also in his remarkable directorial swan-song ‘Frankenstein Unbound’ from 1990).

But, most of all perhaps, ‘The Undead’ simply serves to demonstrate Corman’s increasing dissatisfaction with the back-to-back formula pictures he was churning out for AIP. The film may not have really proved much of success in this regard, but whatever you make of it, it’s certainly a big leap forward from ‘Attack of the Crab Monsters’ in terms of narrative ambition, that’s for sure.

(1)IMDB confirms that the imp is actually played by renowned littler person actor Billy Barty, who made his first screen appearance in 1927 at the age of three, appeared uncredited as a “baby” in ‘Bride of Frankenstein’ at the age of eleven, and continued to work consistently in film and TV right up to the late 1990s. Respect is due.

(2) Interestingly, ‘The Undead’ actually debuted a full eighteen months before ‘The Seventh Seal’ – which was certainly a huge influence upon ‘Masque of the Red Death’ – was released in the USA, meaning that Corman significantly pre-empted Bergman’s reinvention of metaphysical medievalism in cinema here, for whatever that’s worth.

This movie was made during the height of interest in reincarnation in the USA. Other movies that exploited the topic around the same time were The Search For Bridey Murphy and I Led Two Lives. Pamela Duncan never got the recognition she deserved by other studios.