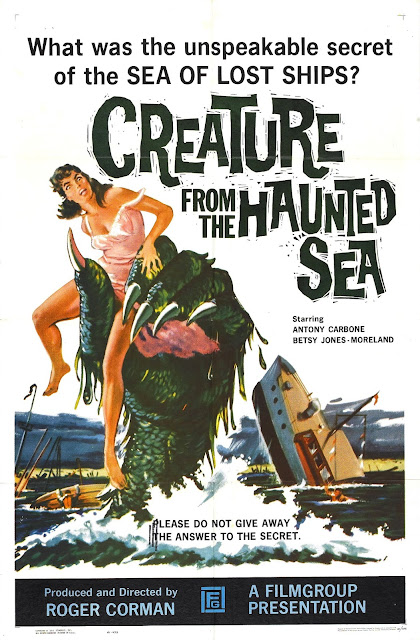 Though Roger Corman is often celebrated for the prolific output and gift for last minute improvisation he demonstrated through his early years as a director, the further one digs into his catalogue, the clearer it becomes that the results of his working methods were, to put it kindly, a bit of a mixed bag.

True, he made ‘Little Shop of Horrors’ in two days, and the result is a thing of beauty and a joy forever. On another occasion however, he had some time left over after shooting ‘Battle of Blood Island’ and ‘The Last Woman On Earth’ back-to-back in Puerto Rico, so he persuaded some of his cast and crew to hang around for a few days and made… this.

Set during the aftermath of the Cuban revolution – pretty damn topical for 1961, then - ‘Creature From The Haunted Sea’ begins with Corman regular Anthony Carbone doing his best Bogart impression in the role of an unscrupulous American pleasure boat captain who finds his vessel commandeered by a bunch of loyalist officers and soldiers who, on the run from Castro’s rebels and with a substantial percentage of the nation’s treasury under their “protection”, are keen to hightail it to South America ASAP.

Hip to the fact that his new passengers are in carrying a substantial stash of loot, Carbone and his crew of comedic layabouts decide instead to lead the Cubans on a wild goose chase of the islands whilst they pick them off one by one with the aim of taking possession of it. But, how do they pick them off one by one without the survivors getting suspicious? Well, naturally they contrive to make the ‘accidents’ look like the work of a Gillman-esque sea monster, using fake teeth marks, foot-prints, monstrous roars and so forth… which is all just dandy until a *real* sea monster shows up!

Now, I’m well aware that the movie I’ve outlined in the last two paragraphs sounds like an absolute hoot (hell, it’s certainly original, if nothing else). But, sadly, that just makes it all the more dispiriting to gradually realise that ‘Creature From The Haunted Sea’ is categorically lacking in anything even remotely hoot-worthy. I mean, seriously, seeing the guy who played the doctor in ‘The Pit & The Pendulum’ doing Bogie is honestly about as close as it gets to a highlight.

Scriptwriter Charles B. Griffith does his best to inject some rib-tickling wise-guy humour into proceedings, and the voiceover that fills us in on the action early on contains a few good zingers (“the Cuban treasury was now in the gentle hands of Renzo Capetto, the most trustworthy man ever to be deported from Sicily..”). The fact that this moderately amusing spiel is limited to voiceover, and presumably added in post-production, however speaks volumes.

When it comes to the stuff that was actually unfolding in front of Corman’s camera in Puerto Rico, evidence suggests that Griffith – assuming he was even involved at this stage – had no more idea of what the fuck was actually supposed to be going on than anyone else present. Most of the cast seem confused and disinterested in the material, with at least some of them giving the impression of only vaguely being aware of the fact they’re appearing in a movie at all, reciting dialogue that was presumably being fed to them from behind the camera with a bare minimum of enthusiasm.

Needless to say, the monster-suit featured here is a real “all time worst” contender even in terms of zero budget ‘50s matinee flicks, an immobile, boggle-eyed effort that looks hilarious in publicity stills, but proves a dead loss in the movie itself… which presumably accounts for the fact that in the end it is barely used, with the whole ‘monster’ angle just kind of fizzling out for most of the run-time.

To be honest, I was never really sure whether we were supposed to be looking at the story’s ‘actual’ sea monster, or the ‘fake’ sea monster that Carbone and crew made to scare the Cubans… although I will at least cop that the finale in which it addresses that question by making a triumphant return and pretty much *killing everybody* was agreeably demented (if not quite up to the high standards set for such things by Del Tenney’s ‘Horror of Party Beach’ a few years later).

Meanwhile, future ‘Chinatown’ screenwriter and New Hollywood legend Robert Towne also stars here as “Sparks Moran”, an undercover U.S. government agent who keeps his radio set hidden inside a can of frankfurters. Once again, it is my sad duty to report that, even when this kind of weird business is afoot, hilarity stubbornly refuses to ensue.

By the time our crew hits shore and the comic relief guys get themselves ‘native wives’, one of whom is named “Mango”, it was all over for me, I’m afraid. I just about made it to the end credits before the wall of sleep crashed down, but with the best will in the world, ‘Creature..’s sixty seven gruelling minutes of nothing-in-particular made me feel as if I’d been confined to the sofa for days.

Well, whatever - I’m sure everyone had a good time hanging out on that yacht in the Caribbean for an extra weekend before schlepping it back to Hollywood. If this movie were to have a saving grace, it would probably be the sheer chutzpah it must have taken for the usually conscientious Corman and his collaborators to offer the end results up to the viewing public - like a lazy schoolboy handing a torn, scribbled scrap of paper to the teacher as homework.

For those who were in on the joke, it must have been beyond hilarious to actually see this thing ending up in cinemas. Personally though, I wish they could have dropped the pretence and just released a home movie of their holiday instead – I honestly think I would have found it more enjoyable than this sorry excuse for a fictionalised entertainment. 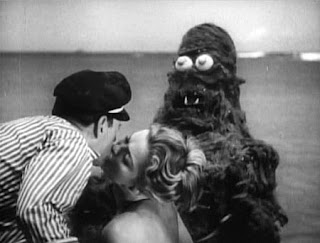