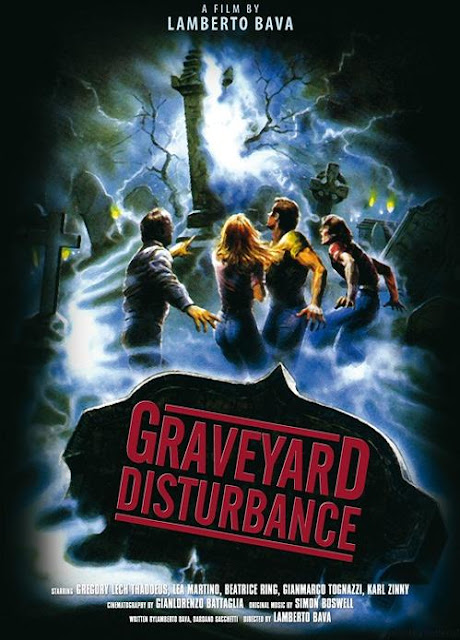 So it occurred to me that if there is one thing missing from Halloween movie run-down thus far, it’s *’80s*.

Scanning over potential viewing options for a way to rectify this, I hit upon ‘Graveyard Disturbance’. Yes, Graveyard Disturbance! It’s a great name for a thrash metal album, and hopefully a great name for a horror movie too. It’s helmed by Lamberto Bava shortly after he came off the ‘Demons’ movies, and, as per just about every Italian horror movie of note made after 1980, Dardano Sacchetti is on script duty. Perfect, barrel-scraping ’88 vintage. Party on!

Well, as I soon discovered, asking “what could possibly go wrong?” of a Lamberto Bava movie is always a foolhardy proposition, but, before Italio-horror’s prodigal son delivered the answer in spades, ‘Graveyard Disturbance’ did at least open in precisely the way I hoped it would.

As a second-rate Duran Duran style electro-pop number plays from a dashboard boombox, we see a series of bold images, all of which are soon revealed to be air-brushed onto the chassis of a van belonging to one of the movie’s gaggle of teenage characters. Amongst the things this dude has painstakingly reproduced on his wheels are: the poster to Dario Argento’s ‘Inferno’; the cover of Judas Priest’s ‘British Steel’ album; the famous barbarian-woman-riding-giant-bird poster from the ‘Heavy Metal’ movie; Madonna circa ‘True Blue’; some leering zombie/vampire heads; a photo-realistic representation of a rock band on stage; some big, Rolling Stones style lips on the bonnet, smokin’ a doobie. It is just about the greatest thing I’ve seen in my life.

Riding in this magnificent vehicle are a gaggle of hapless, instantly dislikeable teens, straight from slasher movie central casting. I suppose we must consider the possibility that they may have been slightly more endearing in the original Italian, but the English dub (my only option for viewing) is brutal.

Enraging me right from the outset, the characters irk the van driver/owner guy by variously referring to his beloved van not only as a “heap of junk”, but even more insultingly, as a “car” and, on one occasion, a “truck”. The fucking idiots. I know sloppy post-sync dubbing isn’t necessarily their fault, but I still can’t wait for them to die. Because that’s what happens is these films. Isn’t it? Lamberto, Dardano, can you clarify…?

Anyway, before we get ahead of ourselves - I’m not sure what part of the world these kids are supposed to be from, where they’re supposed to be going, or where they currently are – aside from a single reference to them being on “vacation”, we’re left in the dark. But what does it matter, once the Horror Movie Fun begins. Because, it will begin. Right guys…?

After they ill-advisedly steal some chocolate bars from a convenience store and swerve through a line of red & white tape to avoid a police check-point (what?), our young protagonists find themselves hopelessly lost in a remote, fog-shrouded woodland area of whatever-place-it-is-they’re-in, where, for no reason, they see driverless, Dracula-style coach.

Abandoning the van (nooo) after an unsuccessful attempt to cross a river, they are forced to continue on foot with their camping gear, and their annoyingness intensifies. One guy’s sole personality trait is that he is a would-be wilderness survival type, so he decides what to do (“follow the river, rivers lead to towns”), whilst the others mockingly call him “Rambo”. Another guy meanwhile plays jokes and does a Bela Lugosi voice. Van owner guy (his thing is, he owns the van) rounds out the male trio, whilst the fairer sex is represented by one girl who is “dumb”, and another who has no discernable personality traits, but she does wear glasses and looks grumpy, so there’s that.

The gang soon find themselves in a wonderfully atmospheric set of ancient ruins – a mixture of real locations and studio sets, it is lit with heavy phosphorescent blues and clouds of slightly lit smoke emerging from doorways, creating a look faintly reminiscent of that achieved by Lamberto’s dad Mario in his masterpiece ‘Kill Baby Kill’/’Operatione Paura’ in 1966.

Simon Boswell’s music – a period appropriate mixture of synth, gated drums and fretless bass, quite possibly composed for one of the ‘Demons’ films – comes to the fore here, and it swiftly becomes clear that what we’re actually looking at is the film-within-a-film that the patrons/victims watch in the cinema during ‘Demons’, remade and extended into a full length movie. Not such a bad idea really, and it certainly helps explain the prevailing tone of tongue-in-cheek slasher pastiche idiocy.

What happens next is that the bedraggled teens rather unexpectedly stumble upon a bar (well, a pub, taverna, what you want to call it) operating out of one of the mouldering dungeons, complete with a neon Miller Lite sign hanging outside in surreal fashion.

Initially, things don’t look so good for protagonists as they enter to find that the place hasn’t been refurbished (or cleaned) since the middle ages, whilst some scraggly-haired troglodytic types hack away at hunks of meat behind the bar and the only other patrons glare at them with glowing eyes. But, things improve as they engage in some banter with the one-eyed inn-keeper (who throws a rousing “Ar-HA-Ha-HAR” into his speech after, and frequently during, each sentence), swap gags with one of the scary customers and enjoy plates of sausages, hunks of bread and cold beer all round.

Clearly this place rules. As a veteran of numerous camping expeditions, I can scarcely express how happy I would be to stumble across such a hospitable joint in which to spend the evening, but, being a bunch of graceless idiots, our teens (aptly described by the inn-keep as “chicken-hearted sprattlings”) don’t quite see it that way, and keep bellyaching about how scared they are and how much they want to leave.

They begin to get a bit more interested however when they notice a big bell-jar stuffed full of cash, gold trinkets and priceless jewellery. The inn-keeper explains, in between garrulous guffawing, that the roots of this go all the way back to some guy who once attempted to steal the legendary thirty gold pieces from Judas Iscariot. Eternally cursed for his trouble, he was buried beneath these ruins, and thereafter the denizens of the tavern have for many centuries made a wager with passing travellers, asking them to add their worldly goods to the bell jar, whose entire contents will be their reward if they can spend but a single night in the catacombs. And of course, none have ever returned (AR, Ha-Ha-HAR, haar).

Now, as much as I appreciated the ambience of the tavern, I will nonetheless cop that handing all your money over to the proprietor and his friends and allowing them to lock you in the basement overnight doesn’t really sound like a very good idea. But, as we have already established, our gang of teens are card-carrying idiots, so naturally they like those odds, and are well up for the challenge.

For my part meanwhile, it was shortly after this that I began to feel that I had signed up for a similarly idiotic wager when I suggested to my wife that we might want to watch this movie on Friday night.

Up to this point, I’ll freely admit that I was quite enjoying ‘Graveyard Disturbance’; even the bad dubbing had generated enough sniggers to keep us going. But, this enjoyment rested largely upon the promise of some good ol’ Italio-horror business yet to come – a hope was to be cruelly dashed at every turn for the remainder of the movie.

Had I taken the time to seek out but one review of ‘Graveyard Disturbance’ before taking the decision to watch it, a few vital facts would undoubtedly have been made clear to me. Firstly, despite being widely issued on VHS etc as a stand-alone feature, the film was actually produced for Italian television (as part of the ‘Brivido Giallo’ series of TV movies that ran 1988-89).

Secondly, as befits its TV origins, ‘Graveyard Disturbance’ is NOT the violent / exploitative horror film promised by the name, poster and personnel involved. Instead, it is a PG rated, family friendly type affair, akin perhaps to Lamberto’s take on ‘The Goonies’. Which is to say, a take on ‘The Goonies’ in which all the characters are interchangeable, charmless assholes and all of the humour falls completely flat.

Imagine if you will, the kind of slasher movie set-up I’ve described in the first few paragraphs of my plot synopsis above. But, rather than being killed off one by one as tradition dictates, the dislikeable teens instead all live happily to the end of the picture, whilst we meanwhile spend the best part of an hour trapped with them as they troop back forth across a handful of claustrophobic sets, nattering incessantly in an ever more grating and ignorant fashion.

Yes folks, it’s a grim prospect. Without wishing to sound too much like a gore-fixated psychopath, I’m afraid this party is *over*.

What is most frustrating about the decision to turn ‘..Disturbance’ into.. this kind of movie.. is that, if they had gone all out for a full strength horror film instead, the potential would have been there to make a pretty good one.

Eccentric touches early on – the van, the inn-keeper – are great, and, as has been mentioned, the sets, lighting and production design in general are all very nice here too; pleasantly atmospheric and full of loving nods to the way Bava Senior and Uncle Dario used to do business. The special effects used to realise the film’s assorted ghouls and zombies meanwhile are actually really good, probably even a step up from the workmanship seen in the ‘Demons’ movies – which makes it all the more disappointing that they basically just pop up occasionally and wander about a bit, without presenting any kind of real threat.

Probably the most memorable and accomplished sequence in ‘Graveyard Disturbance’ in fact is a scene in which a family of ghouls – including a ‘mother’ figure in a Marie Antoinette dress with multiple eyes, and a “heavy metal” kid with a single massive front tooth and a Kiss t-shirt – pop out of their tombs and enjoy a grand meal of slugs, spiders, worms etc. As a standalone effects set-piece, it’s rather delightful, so again, it’s a shame it doesn’t play into anything that happens in the rest of the movie.

But, as is probably clear by this point in this review, the whole thing is a shame. A damn shame. All the ingredients for a minor classic of shamelessly trashy, late period Italian horror were lined up and ready to go. With whom then did this idea of trying to turn it into some kooky, teen-friendly caper originate? The result is a film that fails on all levels and most likely appealed to absolutely no one, so please, can we get someone to blame up here? Was it the producer’s fault, or the TV company? Lamberto? Dardano? Would you like to take the stand?

Meanwhile, I’m afraid my advice to anyone faced with the prospect of viewing ‘Graveyard Disturbance’ must be: watch the first forty minutes, then turn it off and spend the remainder of your evening drawing pictures of what you think should have happened in the rest of the movie. Then perhaps post them to Lamberto Bava. Trust me, it will prove a lot more fulfilling.