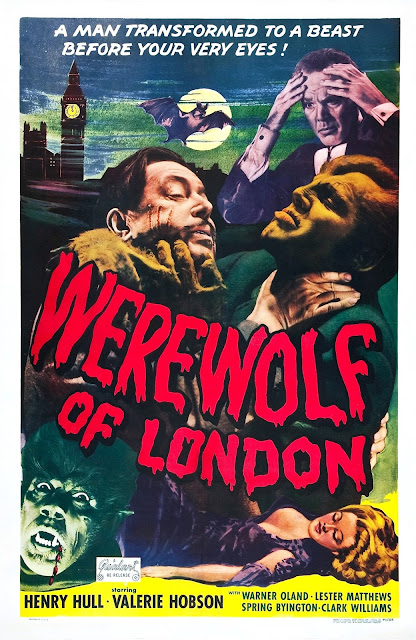 During the Second World War, American studio horror films (and Universal’s efforts in particular) managed to boil themselves down into a set of formulaic clichés that have come to broadly define the idea of “cheesy horror films” in the popular imagination ever since.

That much we know, but the shadow cast by eight subsequent decades of monster movie branding makes it easy to forget that, a full decade before Glenn Strange was stomping about in the Frankenstein get-up and some mad scientist was trying to decide which brains to put where whilst the torch-wielding mob knocked on his door, many of the first wave of American horrors from the early/mid 1930s were far more unpredictable and just-plain-weird than this reductive set of clichés would suggest - and not just the designated classics helmed by Whale, Browning, Freund and Ulmer either.

My theory, y’see, goes that, during the pre-war years, studio directors and writers who found themselves assigned to a horror picture were obliged to strike out in all kinds of tentative new directions, faced as they were with a new, commercially popular genre for which no easily replicable template had yet been established. For a few years at least after the runaway success of ‘Frankenstein’ and ‘Dracula’, the thinking seemed to be that a big part of what pulled the punters in to see these movies was the sheer novelty of their subject matter – that oh-so-bankable “nothing-like-this-seen-before-on-the-screen” factor.

Rather than merely seeking to imitate those earlier hits therefore, Universal and the other studios seemed to want their boys to crank out some genuine ‘Shock of the New’… and mad-as-a-barrel-of-bats pictures like ‘Werewolf of London’ were the inevitable result.

As everybody knows, it was Curt Siodmak’s script for 1941’s ‘The Wolf Man’ that basically laid down the law for all future cinematic werewolves, pretty much inventing the werewolf mythology we now take for granted, and, as such, it feels all the more surprising to go back a further six years and discover that Universal’s first – commercially unsuccessful - stab at a werewolf movie completely ignored the monster’s origins in European folklore, instead pulling together elements of “exotic” orientalist adventure fiction, newly minted Frankensteinian mad science, slight echoes of ‘abominable snowman’ mythos and a hefty dose of Jekyll & Hyde to tell a very different tale of lycanthropy.

It’s all great stuff, and, watching for the first time, I went through most of the film with absolutely no idea where it was all going next -- which is a lovely feeling when it comes to a genre movie made over eighty years ago.

On a more prosaic level meanwhile, another thing ‘Werewolf of London’ has going for it in the weirdness stakes is the casting in the lead role of Henry Hull – a prolific character actor who here delivers a very convincing impression of a granite-jawed, hammer-headed lummox entirely devoid of human feeling.

Seriously, Hull’s character – a pioneering botanist and plant-hunting adventurer - is so rude to everyone he encounters during the film, it’s a miracle he has any friends or supporters at all, let alone a beautiful wife (Valerie Hobson from ‘Bride of Frankenstein’ and ‘Kind Hearts & Coronets’) to ignore and belittle, a whole garden party full of wealthy associates to offend, and a luxuriously appointed mansion house/botanical gardens/laboratory set-up in which to receive them.

Though Hull never becomes an out-right villainous character (in the vein of Peter Cushing’s Frankenstein, or the roles Michael Gough played for Herman Cohen in the ‘60s), he nonetheless comes across as a conceited, self-centred asshole, and much of ‘Werewolf of London’s failure to engage with audiences over the years has retrospectively been blamed on the film’s decision to present them with such an entirely unsympathetic protagonist.

Personally however, I’ve never much cared for this “central character must be sympathetic” jive that critics sometimes fall into, and I very much enjoyed the way that Hull’s perpetually enraged presence makes every conversation in the film feel spectacularly awkward. This allows ‘Werewolf of London’s idle chatter-filled dialogue scenes to side-step the usual blandness and expositional drag, instead filling the movie with pregnant non-sequiturs, uncomfortable silences and “well… I suppose I’d better be going then…” type moments, all of which I found most amusing.

(To be honest, Hull seems like such a goddamned weirdo, it’s easy to believe that few of these emphases were actually present in the script – it’s as if the other actors just had no idea how to react to him.)

Speaking of weirdoes meanwhile, the somewhat more likeable Warner Oland is also on hand as the inscrutable Dr Yogami, essentially offering a slight variation on the Charlie Chan character he played in dozens of sixty minute programmers through the 1930s. Though supposedly a more villainous figure than Hull’s character in terms of the storyline – not to mention racially offensive on more levels than can be calculated without the help of a spreadsheet – Oland’s faux-Asian quack doctor is a veritable teddy bear compared to our leading man, which leads once again to some very strange cognitive dissonance in terms of the way business is conducted on-screen.

Though ‘Werewolf of London’ is nothing special in terms of artistry or atmosphere, Stuart Walker’s direction is breezy and fast-moving, most of the film’s performances are lively and Hull’s transformation into an inadvertently rockabilly-styled wolfman is a hoot (sacrilege though it may be to say so, I think I actually prefer the make-up job here to Jack Pierce’s work on the ’41 Wolf Man). It’s all just such a wonderfully imaginative load of cracked, b-movie fun, it is impossible not to enjoy it on some level – so if you’ve previously overlooked it, I’d definitely recommend giving it a shot at the nearest opportunity.

For a perfect case study in what went wrong with horror movies between the mid ‘30s and mid ‘40s meanwhile, just try contrasting ‘Werewolf of London’ with its quasi-sequel, ‘She Wolf of London’ from 1946 - a sixty minute programmer so utterly lacking in interest that I can honestly believe it was concocted as part of some studio in-joke to try to drive audiences home to bed before the main feature came on.

I was going to do a separate review of ‘She Wolf..’, but… there really is nothing to say. I might just as well review the carpet in my living room. If, like me, you’ve got both of these movies on a double feature disc, please do yourself a favour and just skip the second one entirely. Hell, watch ‘Werewolf of London’ again instead – you’ll be happier that way, trust me.

The makeup in London is much more feral and ferocious looking than the Chaney versions (which is fine in its own right). Copyright issues aside, I think that Hammer followed the London style of werewolf for Oliver Reed in Curse of the Werewolf instead of the Jack Pierce design. Over in Spain, Universal fan Paul Naschy's various makeups emulated the Chaney template.

Must catch this. Make-up aside, the Tibetan sub-plot suggests that this one must have sunk into Naschy's unconscious to re-emerge in 'Night of the Howling Beast/The Werewolf and the Yeti'

Yes, that could well be the case...! I hadn't previously made that connection.

Anyway, thank you both for your comments. Some Naschy-related content coming up imminently, by the way....