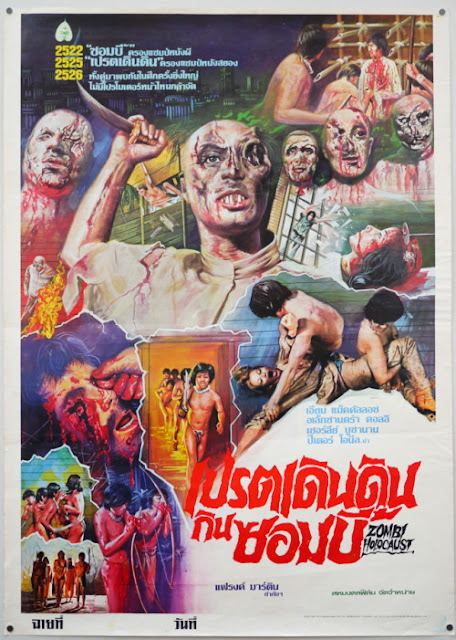 (In the absence of any decent scans of an original Italian poster, let’s enjoy this splendid effort from Thailand.)

When it comes to the “rip off” aesthetic that increasingly dominated Italian genre cinema from the late ‘70s onwards, wherein cash-strapped producers ceased even trying to differentiate their product from the prior hits they were cashing in on, you’d be hard-pressed to find a more glorious example of the phenomenon’s ultimate, self-consuming end-point than ‘Zombi Holocaust’ – an infamously shoddy venture that forms something of a line in the sand for fans of Euro-horror/exploitation.

For many, this film represents the bottom of the barrel in terms of mindlessly derivative cine-sludge, whilst for others of a less discerning / more adventurous nature [delete as applicable], it instead forms the gateway to a whole new subterranean kingdom of trash-horror wonderment. Either way, it’s quite the thing to behold, and even the highest minded aficionados of this-sort-of-thing probably owe it to themselves to sit down and give it a try at some point – if only to test their individual tolerance for further trash-gore spelunking.

Often playing more like an extended cult cinema in-joke than a stand-alone movie, the sheer opportunistic shamelessness of the logic behind ‘Zombi Holocaust’s existence (basically: ‘Cannibal Holocaust’ was a hit? ‘Zombi 2’ [aka ‘Zombie’ (U.S.), ‘Zombie Flesh Eaters’ (U.K.)] was a hit? Et Voila = ZOMBI HOLOCAUST!) is already somewhat irresistible, whilst the fact that one of the films it is chiefly cannibalizing was *already* an unauthorised Italian sequel to a successful American movie (‘Dawn of the Dead’, released in Italy as ‘Zombi’) takes cinematic plagiarism to what at the time must have been new and giddy heights. (I’m sure if you follow the bread-crumb trail a few years down the line, you’ll find that someone in turn started making rip-offs of ‘Zombi Holocaust’, and so the glorious cycle continues.)*

Actually, the lengths to which ‘Zombi Holocaust’ goes to rip off Lucio Fulci’s film in particular are really quite extraordinary. I mean, I can see the rationale for borrowing the basic plot outline, using similar zombie make up and even rehiring the same lead actor (fan favourite Ian McCulloch) - but was there REALLY an audience back in 1980 who were liable to sit there thinking, “OMG, that isolated house in the jungle looks EXACTLY like the one in ‘Zombie Flesh Eaters’, and that low angle shot where the Landrover arrives in the village is exactly the same too! I am so psyched!”..?

I don’t know, but if such peculiar viewers did exist, they certainly would have found themselves well catered for here, as ‘Zombi Holocaust’ repeatedly reaches that baffling point on the “rip off” spectrum wherein the effort taken to painstakingly recreate entirely incidental details from an earlier film exceeds that which would have been necessary to feign originality by actually just shooting some new stuff that might have proved more appealing to the target audience… and scratching one’s head over the twisted logic of such decision-making is but one of many, many small pleasures that help make Girolami’s film such endlessly charming viewing for us jaded 21st century know-it-alls.

Taking a “2 + 2 = ?!?!” approach to combining elements of its two source texts, ‘Zombi Holocaust’s New York set opening – in which cultists belonging to an obscure Asian cannibal sect are found to be rampaging around a city hospital misappropriating body parts – is a pure, politically questionable b-movie delight. Reminding me somewhat of the equally unlikely Quetzalcoatl cultist sub-plot in Larry Cohen’s ‘Q: The Winged Serpent’, I can’t help wishing that they’d spun this idea out into an entire movie of its own.

But at the same time, I’m also glad they didn’t, because then we would have missed out on the earnest discussions conducted between the police and the pipe-smoking “Professor Drydock” (no, really) from the University, and their decision that the best solution to this problem is to ask the Mighty McCulloch (is his character a doctor of some kind, or a policeman? I’m not really sure it’s make clear) to step in and head up an expedition to the remote islands in the East Indies from which the cult originated, where, accompanied by a photogenic anthropology-studying nurse (Alexandra Delli Colli), some other guy and the obligatory interfering journalist, he will uncover the secrets of this benighted cannibal tribe and… well, I don’t know really.

I mean, wouldn’t be easier to just arrest the people who are getting up to all the monkey business at the hospital, and go from there? You know, interrogate them, look for witnesses, that sort of thing? But what do I know of police work. Pack your khakis and don’t forget the mosquito net - the boat leaves at dawn!

And so, as absurdity piles upon absurdity, ‘Zombi Holocaust’ repeatedly demonstrates that, despite its aspirations toward innard-chewing, brain-sawing video nasty infamy, at heart it really has more in common with old psychotronic favourites like ‘Mesa of Lost Women’ (1953) or ‘Horrors of Spider Island’ (1960) – a goofy, comforting little b-movie that is fully aware of its own silliness, whilst simultaneously remaining conscious of the fact that actually cracking a smile would cause the audience’s enjoyment to crumble like the Walls of Jericho.

That the credited director of this mess was actually the FATHER of Italian action supremo Enzo G. Castellari was something I initially found inordinately amusing (it’s easy to imagine Enzo taking breaks from whatever ‘Jaws’/’Dirty Dozen’ rip-off he was making at the time to field excruciating “No Dad, THIS is how you do a tracking shot..” style phone calls) - until that is, I checked IMDB and discovered that ‘Zombi Holocaust’ was actually Marino Girolami’s seventy second film as director, and that he had in fact been calling “action” on lower budget genre pictures pretty much non-stop since 1950.

We could speculate as to whether it was a deficit of quality or sheer bad luck that ensured that none of Girolami’s films prior to this one have ever gained much exposure outside of Italy, but given the number of technically accomplished European directors who found themselves delivering absolute rubbish when the VHS horror boom hit in the ‘80s, it would seem manifestly unfair to make a judgment call on his work based solely on ‘Zombi Holocaust’ - so I won’t.

Either way though, it seems likely that the director’s veteran status may have contributed somewhat to the strangely old-fashioned feel of ‘Zombi Holocaust’. Whilst it is ostensibly still a gore-soaked rampage through a tropical hell, the film somehow ends up feeling just sort of… I don’t know… nice, even whilst poorly paid local extras in ridiculous b-western Indian get-up are gobbling cream of tomato soup from some poor unfortunate’s latex torso.

Despite what I take to be the producers’ best efforts to pile on the nastiness, this one entirely lacks the mean-spirited extremity or queasy gross up agenda of a contemporary Fulci or Deodato film. Much like the minimum-of-effort “bloodshed” usually employed by Jess Franco, this is purely emblematic gore – any resemblance to the real thing is purely coincidental. Like everything in ‘Zombi Holocaust’, it’s all offered up in a spirit of pure, casual fun, with little suggestion that anyone is ever actually in pain.

And, essentially, I could continue trudging through a blow-by-blow account of all the great stuff in ‘Zombi Holocaust’ until the cows come home. There’s the square-jawed, cheque-collecting determination of McCulloch’s “I-failed-the-audition-for-Indiana-Jones-and-woke-up-here” lead performance for instance - or how about the perfectly shaped stone mold that the cannibals have lying around ready for Delli Colli after they strip her naked and body-paint her with some pretty flowers? (Hippy cannibals, eh? Well, you live and learn.).

From the adorably off-beat antics of Donald O’Brien as one of the least hygienic yet most strangely sincere mad scientists seen this side of the 1950s, to the to the bit where one of expedition’s dubiously portrayed ‘native porters’ almost throws an “oh man, you mean I gotta bury ANOTHER body..” style teenage strop after our heroes respond to the grizzly demise of his friend with scarcely more than a “huh, there ya go” shrug… well, you get the picture. There is just so much to enjoy here.

You can mock ‘Zombi Holocaust’ all you like, but to give Girolami his due, at the end of the day it is a vastly more entertaining prospect than most of the other bottom-feeding zombie/cannibal snoozefests that emerged in the early ‘80s (yes, I’m looking at you, Eurocine). This is chiefly due to the fact that, for all of its many shortcomings, the picture rattles along like a goddamned freight train, never resorting to dreary ‘padding out the run time’ type footage and rarely going more than a couple of minutes without throwing us something divertingly awesome and/or ridiculous to chew on.

Add one standing ovation-worthy Classic Gore Moment (all I need say is: outboard motor), the eventual appearence of some genuinely kind-of-scary looking zombies (well, I liked them), and a pitch perfect grinding, electronic dirge of a score from Nico Fidenco (whose 70s/80s CV is so sleazy, this almost counts as a career highlight), and, for those with the alchemical suss to suitably process it, ‘Zombi Holocaust’ is pure gold - a mighty anti-classic that no one with even the slightest fondness for Italian trash cinema could fail to love like a disfigured child.

* On the cannibals-meet-zombies tip, Bruno Mattei’s actually-pretty-great ‘Zombie Creeping Flesh’ aka ‘Hell of the Living Dead’ (which premiered about six months after this film) springs to mind as an obvious ‘Zombi Holocaust’ descendent, although I’m not exactly about to call the lawyers in over that one, y’know what I mean.

Zombi Holocaust was re-titled Dr Butcher M.D Medical Deviate by Terry Levine's Aquarius Film Releasing company in the USA. A "Butcher Mobile" with performers in medical garb and make-up cruised the Times Square streets as ballyhoo. The fading days of exploitation gimmicks on The Deuce. The Aussie distributor was an exploitation genius.