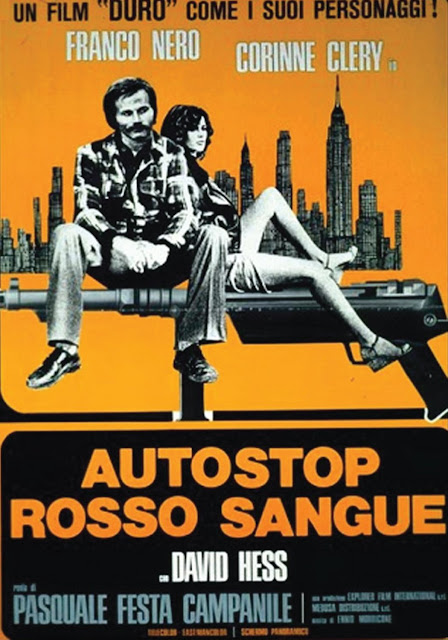 You know this one of course. An Italian-shot / American-set three-hander in which Franco Nero plays a boorish Italian journalist and Corinne Clery his long-suffering wife. We meet the couple mid-way through an especially cantankerous caravanning/hunting holiday in a not-quite-right looking Arizona, and, when they ill-advisedly offer a lift to fugitive bank robber and all-round psychopath David Hess, the spirit (if not the precise detail) of what follows can be most eloquently expressed by the awkwardly collaged cover of this Raro DVD edition. 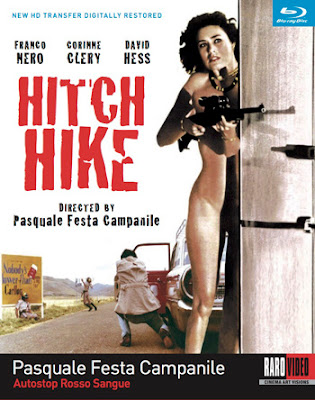 So.. yeah. Basically, Campanile’s film rose far, far above my (relatively low) expectations, swiftly revealing itself to be a brutally effective, edge-of-seat kidnap/survival thriller in which the outrageous outbursts of violence and psychological handbrake turns necessary to keep such a tale rolling are handled with enough gravitas to ensure the tone remains serious as cancer throughout, creating a “literally anything could happen next” atmosphere that ratchets the tension mercilessly.

When it comes to critical writing (particularly on the subject of horror or crime movies), it has long been a cliché for reviewers to try to explain their dislike for a particular authorial voice by falling back some variation of the old “when every character is completely dislikeable, why should we care what happens to them?” argument. Perhaps I’ve even used this once or twice here myself over the years, I don’t recall, but anyway – following in the footsteps of any number of talented writers and filmmakers who have provided persuasive answers to that hypothetical question, ‘Hitch-Hike’ offers a stark lesson in just how shallow and wrong-headed such a judgmental approach to story-telling can be.

As such, let the record state that every character with a speaking part in ‘Hitch Hike’ is an absolute bastard, plain and simple. The only sympathetic emotion either Nero or Hess are liable to extract from an audience is one of pity, and even then, their constant, self-centered whining gets old pretty quick. Clery meanwhile is so steely she doesn’t even have that much going for her, shrugging off the assorted indignities she suffers through with an expressionless acceptance that suggests she’s angling to push both of her ugly suitors straight off the edge of a precipice as soon as is humanly possible.

When, as here, though, the writing and performances are strong enough to force you to walk a mile or two in the characters’ shoes, well... who gives a damn for your conception of whether or not you “like” them? If you’re looking to spend some time with people whose company you’d enjoy at a dinner party, you’re in the wrong genre here right from the outset, let’s face it.

Watching ‘Hitch Hike’ in its American dub – which is really the best option, given that we get Hess as nature intended and Nero dubbing himself in heavily accented English (which makes perfect sense, given that his character is an Italian tourist) – Clery’s performance inevitably suffers as the only dubbed member of the central trio, but to be honest she’d probably make the least impression in any language. You’d be hard-pressed to find any film more comprehensively disdainful of the demands of the Bechdel test than this one, and, devious though Clery’s character may be, we’re in the darkest heart of ‘70s machismo here, and it’s the tragic dance between Nero and Hess that really commands our attention – two deeply pathetic, animalistic losers, practically frothing at the mouth to try to grasp alpha-male status from the other, straining at the leash to take each other down, with the woman serving as a combined prize, servant and all-purpose hate object.

Nero in particular gives a fantastic performance, dragging the reprehensive thought processes of a man a less imaginative film might simply have pegged as our ‘hero’ into full view and letting them sizzle and melt in the sunlight, whilst Hess – true to form – gives us a leering human monster to rival Al Lettieri in ‘The Getaway’, Andrew Robinson in ‘Dirty Harry’ or Tomas Milian in ‘Almost Human’, even as he openly mocks the off-the-peg “I came from a broken home / society made me do it” self-justifications offered by those characters, opining at one point that he had a perfectly happy childhood and supportive family, but turned to the dark side because… well, you fill in the blanks. (We’ll get the ghost of Michael Winner to mark your answers after the show.)

Taken out of context, the scene in which Hess eventually rapes Clery whilst her husband watches tied to a chair (you’re watching a movie with Hess in, so you know he’s got to do his thing, right?), would be difficult to even sit through. But, coming at the point in the film at which it does, with the black-hearted, calculating intent of all three characters writ large upon their faces, the ‘big event’ takes on an entirely different complexion. As director, Campanile deserves huge kudos for presenting this scene less as the titillating act of gratuitous abuse most of his peers would have settled for, and more as a kind of hideous, inevitable ritual through which all three parties are angling toward their own, mutually exclusive goals. Like so many bits of business in ‘Hitch Hike’, it’s the kind of scene that sticks in your mind after viewing, encouraging you to start picking at its emotional residue like a dried scab, against your better judgment. Nasty, but irresistible.

Actually, Campanile and his collaborators excel all round here. Though ‘Hitch-Hike’ rarely gets stylistically flashy, as an efficient piece of dramatic film-making in the ‘70s crime idiom, it pretty much nails it. Character interactions are text-book exemplars of bug-eyed, whisky-soaked tension (you can almost feel the spirit burn at the back of your throat), whilst the film’s action sequences are surprisingly elaborate and often pretty awesome, incorporating wild-ass, verge-of-disaster stunt work and Peckinpah-esque cross-cutting that pretty much embodies everything you’ve ever loved about low budget ‘70s action cinema.

Running an unexpectedly lengthy 105 minutes, the film’s final act may induce a certain amount of head-scratching as the story continues to ramble on for a good fifteen minutes after what seems to be its natural conclusion, but I suppose they just figured, hey, we’ve got our movie-making mojo working so good here, let’s just keep on rolling (there’s that spirit of generosity I mentioned in the previous post in full effect)… and when we do eventually reach the final pay-off, you’ll get the point loud and clear.

Accomplished as it may be in technical terms, ‘Hitch Hike’ exhibits absolutely no traces of self-conscious artistry or social responsibility, and frankly a story this relentlessly hard-boiled is better off without them. It’s as if an Umberto Lenzi movie crashed head-first into a Jim Thompson novel leaving bullet casings and panties scattered across the asphalt, and it doesn’t need no fuckin’ auteur theory getting in the way.

Though it is often pegged as a poor cousin to Mario Bava’s broadly similar ‘Rabid Dogs’ (1975), I’ve got to admit that, in my heart of hearts, I think ‘Hitch Hike’ is the better of the two films. It’s a harrowing, high octane floor-punch of a movie, and if you’ve managed to side-step it thus far in your cinematic career, now is as good a time as any to take it on the chin and see if you’re still standing when the credits roll. [Spits out blood and teeth before staggering off toward the next review.]

(PRO TIP: For a great double bill, why not try this one out alongside Luigi Bazzoni’s style-is-the-substance giallo masterpiece ‘The Fifth Cord’ (1971)? Two very different varieties of Italian filmmaking, united by their shared status in the rarefied sub-genre of “movies in which Franco Nero has his Hemingway-esque macho self-image systematically destroyed whilst he stares out at the world with big, sad eyes”.)

I agree. Hitch Hike is a better, more nihilistic, more insane, more emotionally charged film than Rabid Dogs. I've seen both films once. That was enough. Both films could and would not be produced today with the current PC climate.

Agreed! I can't speak for "the current PC climate", but both of these films have a kind of raw wildness to them that 21st century filmmakers seem entirely unable to replicate, even when they're deliberately paying homage to it.

I should state by the way that, as a die-hard Bava fan, I also like 'Rabid Dogs' a lot - but 'Hitch Hike' really takes it to another level.

Ben, I believe this reticence is due in part to the "PC" climate and those vocal people offended by anything and everything. So the filmmakers don't let loose like they did in the 60s, 70s and 80s.