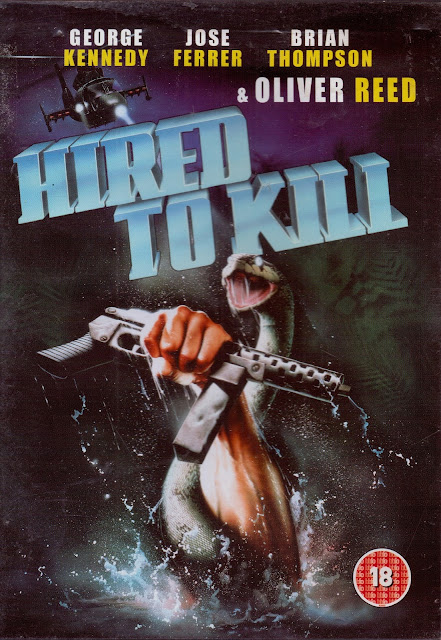 Hitting shelves soon as part of Arrow’s inexplicable campaign to revive the work of VHS-era Greek exploitation kingpin Nico Mastorakis (whose 1986 film ‘The Edge of Terror’ aka ‘The Wind’ we covered here a while back as a VHS Purgatory post), ‘Hired To Kill’s forthcoming release reminded me that I have actually owned the film on DVD for years and never got around to watching it -- until now, that is.

Purchased as part of a “10 DVDs for £10” deal from a local junk shop if I recall correctly, my copy of the film bears the seal of Hollywood DVD – celebrated suppliers of Godfrey Ho ninja movies to Poundland stores across the nation – and, at the time, my rationale for dropping 50p on it probably didn’t extend much beyond “Oliver Reed? SOLD!”, to be honest.

(Further proof, as if it were needed, that whatever inflated pay-packets independent movie producers might dish out to contemptuous, washed up legends to ensure their cooperation in creatively bankrupt genre vehicles, it’ll be worth it in the long run as long as goons like me are still buying the tickets.)

Anyway, as it transpires, ‘Hired To Kill’ is a head-spinningly goofy sub-Cannon action flick starring a charisma-free muscle dude named Brian Thompson, who perhaps ever so slightly resembles a very young Lee Marvin if you squint, but basically spends the bulk of his screen time looking like he just got thrown off the university rugby team for banging his head against the locker-room wall too many times.(1)

Thompson plays a mercenary hired by sleazy uber-capitalist George Kennedy to take down Oliver Reed, who is the tyrannical ruler of some ill-defined rogue nation. This will allow their local power-to-the-people resistance movement (headed by a barely-in-this-movie-at-all Jose Ferrer) to take charge, ready for Kennedy and his shady CIA-backed cohorts to sweep in and exploit the hell out of everybody. Or something.

From this agreeably cynical starting point, things swiftly descend (ascend?) into la-la land when it is explained that security in Reed’s dictatorship is so tight that there is only one possible plan that will get Thompson inside. That of course being that he will pose as a famous fashion photographer, recruiting a dirty half-dozen of beautiful female fighters (a women’s prison boxing champion, a duplicitous Mossad agent, a mute girl who bloodily dispatched the soldiers who murdered her family – you get the idea) to serve as his “models”, thus allowing them to infiltrate the highest echelons of wherever-the-hell-it-is society and to pad out the middle half hour of the movie with gratuitous Andy Sidaris style swimsuit footage until such a point as it is deemed prudent for the girls to change back into their khakis and go all “paintballing weekend” for the inevitable closing reel of exploding barns and low flying helicopters. Splendid.

You might be thinking that seems like a fairly unlikely means by which to effect a coup d'état in a military dictatorship, but look here – George Kennedy says his experts have looked at ALL the possibilities, and this is the ONLY ONE that will work - so you can shut up.

(Let the record state that ‘Doin’ It For The Money’, the sleazed up, sub-Prince electro-pop number that accompanies all of the fashion shoot / pool loungin’ sequences, is a minor masterwork.)

At this point, we should probably address the confusion regarding where this film is actually supposed to be set. Although the text on the back of the DVD box refers to “a volatile Mid East nation”, in practice it looks an awful lot like a quiet Greek island, and all references to the country’s name or location are pointedly avoided during the first half of the film… until that is, Mastorakis suddenly drops the pretense and has his characters begin referring to it as – uh – “CYPRA”. Subtle, Nico.

No one however seems to have communicated any of this to Oliver Reed, who turns up to the party as a full-on South American ‘El Presidente’ type figure, complete with a mangled Hispanic accent, a red star peaked cap and a truly magnificent moustache.

Happily though, Ollie is a lot more engaged and enthusiastic here than he was in many of his latter-day “descent into cheque-collecting ignominy” appearances, probably due to Mastorakis’s wise decision to place his character in a lot of scenarios that the old boy presumably quite enjoyed – shouting at people whilst waving a machine gun around, quaffing wine at a dinner table surrounded by glamorous ladies, and, in one intensely uncomfortable sequence, holding forth about the artistic qualities of his own love-making whilst groping a woman’s breasts from behind.

The latter scene, it should be noted, occurs shortly before Thompson – whose fashion designer cover story requires him to undertake the least convincing impression of a homosexual ever seen on screen – kisses Reed full on the mouth, in a sequence you can guarantee never reached take # 2. Whilst I would generally tend toward the opinion that you’d have to be out of your mind to buy ‘Hired To Kill’ for full price on blu-ray, the chance to see Reed’s subsequent reaction shot in HD should be worth the entry price alone.

If, reading this, you’re thinking ‘Hired To Kill’ sounds like a dose of pure trash movie nirvana, well, to a certain extent you’re not wrong. The dialogue and line delivery alone are enough to potentially make this the stuff of snarky Youtube legend, and, if you do the decent thing and wait until the point in the evening when you’ve reached the end of a six pack before hitting play, the sheer ridiculous, wrong-headed grandeur of the whole venture will leave you speechless…. for about fifty minutes or so.

At that point, you might find yourself checking your watch and reflecting that that this cheapo sub-Cannon action movie you’ve been watching has been conspicuously lacking in any cheapo, sub-Cannon action. In fact, aside from the inevitable training montage, there has actually been no action whatsoever, which is something of an astounding oversight for a film of this nature.

Much like its close cousin Ted V. Mikels’ ‘The Doll Squad’ (1973), ‘Hired To Kill’ is the kind of “action” movie in which the campy faffing about that leads up to the action is a sheer delight, but when it gives way to the actual real deal of people in army boots with prop machine guns creeping around door-frames and throwing hand grenades, well…. I guess the basic issue is, to make that kind of stuff exciting (as opposed to a show reel for a second rate stunt team) takes a certain degree of talent for dynamic filmmaking and narrative tension, so… yeah.

I’m sure the dozen or so stuntmen who comprise Oliver Reed’s unstoppable army [cue compulsory Elvis Costello singalong] all did their best, and it’s my duty to point out that some of the women who comprise Brian Thompson’s all-girl commando squad actually seem like fairly capable and interesting actresses who richly deserved better roles than those assigned to them here, but regardless – clearly the all-out, insurance policy defying, seat-of-yr-pants destruction fest that could have sent us out on a high and secured ‘Hired To Kill’s place as an all-time dumb-ass classic just didn't materialise.

At the end of the day, the sad fact is that all Nico Mastorakis movies, however entertaining they may initially appear, seem to eventually succumb to the all too familiar haze of safe, under-achieving blandness common to post-1990 straight-to-video productions, and ‘Hired to Kill’ is unfortunately no exception, with its essential failure to fulfill the expectations of its genre condemning it to splutter out and hit the curb, irrespective of the uproarious highlights that have kept us rolling to within reach of the hour mark.

By the way, did you know that ‘Nights Of Cabiria’ and Antonioni's 'The Passenger' aren’t out on blu-ray yet?

(1)A quick IMDB trawl reveals that Brian Thompson previously appeared as “Punk” in The Terminator, and in the no doubt pivotal role of “Night Slasher” in Stallone’s ‘Cobra’. In between numerous Hollywood bit-parts, he also headlined a Fred Olen Ray movie (‘Commando Squad’), and, with crushing inevitability, wrote, directed and starred in a 2014 production named ‘The Extendables’.

By the way, did you know that ‘Nights Of Cabiria’ and Antonioni's 'The Passenger' aren’t out on blu-ray yet?

AND Roman Polanksi's THE TENANT!

Actually, I was going to use 'Treasure of the Sierra Madre' and/or 'The Wages of Fear' for that closing gag, but it turns out they have both now been released on blu... which proved a potentially expensive few minutes of research.


By a coincidence, a week before I read your review of 'Hired to Kill', I finished reading 'What Fresh Lunacy is This?', the authorised biography of Oliver Reed written by Robert Sellers and published in 2013. In the book, Sellers actually tracks down Brian Thompson and gets him to share a few memories of working with the great man.

For the most part, Thompson remembers Ollie doing what he normally did in his later career -- hitting the bottle massively when he was off the set, but being fully professional and 'compos mentis' when he was on it: "regardless of his state of inebriation, when those cameras rolled he was a consummate actor, he knew his lines, he hit his marks. It was as if he could sober up and become an artist. It was a sight to behold."

That said, Thompson was not enthused by the scene in which he had to kiss Ollie -- and he claims that, due to technical malfunctions, the scene had to be shot five times over. "Actually," says Thompson, "the fact that he drank so much was the reassuring part of kissing him because I'm sure there was no bacteria in his mouth. But it was definitely an act of endurance."

Ollie's professional standards slumped, however, on the last day of the shoot. At breakfast-time in his hotel, he somehow got into a boozing session with some fellow guests that involved the quaffing of nine bottles of champagne, meaning that he turned up for the final, climactic shoot of the film in a well-refreshed state. The final shoot involved him standing in a courtyard surrounded by hordes of rebel soldiers; and, accepting defeat, he throws his gun on the ground. According to Thompson, that was not what director Niko Mastorakis got. "All Oliver has to do is drop his gun. We've got two helicopters in the air, we've got fifty rebels surrounding him. So the cameras start rolling and Oliver's sort of staggering in the middle of the courtyard, and he unzips his pants and pulls out his chopper. Niko goes nuts: 'Cut! Cut!' And everyone's in shock..." Then, however, Ollie went up to Thompson to justify himself. "Brian," he said, "that stupid director wanted me to drop my gun, but you know, the rebels, if I'd dropped my gun they would have killed me. So instead I wanted them to think I was crazy and that is why I pulled out my chopper."

Amazing info Ian - thanks so much for sharing it all! : D

I really should pick up that Sellers book... must be quite a read.