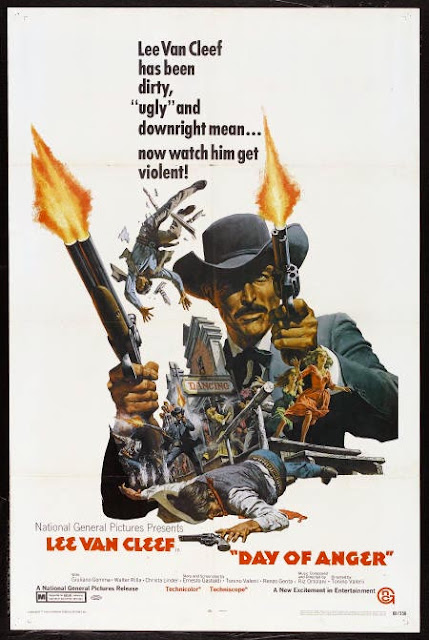 Lacking in either the stylistic grandeur of Leone, the sweaty political heft of Sollima or the transgressive pulp grit of Corbucci, Tonino Valerii’s first Spaghetti Western initially seems a pretty routine affair, very much channeling the workaday professionalism of the kind of movies Joel McCrea or Randolph Scott were headlining in America ten years earlier.

This being post-Leone though, there’s also a strong strain of blood-thirsty, samurai-style lone wolf violence in the mix here too, and whenever things hustle toward a showdown, Valerii steps up to the plate with a controlled, dramatic directorial sensibility that, if somewhat more retrained than those of his aforementioned contemporaries, nonetheless delivers the goods just the way we want ‘em.

Needless to say, Lee Van Cleef is a total bad-ass in this one, playing one of his best ever ruthless, squinty-eyed gunfighters (which is saying something, given the extent to which he cornered the market in ruthless, squinty-eyed gunfighters), and if you like your westerns full of the kind of lightning fast, unpredictable kill-shots that raise an involuntary “woop!” or “hell yeah!”, ‘Day of Anger’ has you well covered.

Meanwhile, a miscast Giuliano Gemma as Van Cleef’s protégé / successor plods through his “zero to hero” story arc divertingly enough as various crooks and baddies (Harry Alan Towers regular Walter Rilla and the great Al Mulok amongst them) creep and seethe on the margins, awaiting their comeuppance. Ernesto Gastaldi’s script is pretty good as far as these things go (by which I mean pacing is solid and the characters consistent, with only occasional outbreaks of errant nonsense), but when Van Cleef is off-screen and folks start yapping, things inevitably simmer down a bit, hitting a comfortable “dusty ol’ B western” comfort zone.

The film’s second half has a lot of great stuff with Van Cleef building a grand, quasi-psychedelic casino/saloon whose visual aspect is just as awesome as it is historically questionable, and generally striding around in ass-kicking “I own this town” type fashion, all of which is splendidly enjoyable for those of us who always find ourselves cheering for Van Cleef even when (as usual) he’s playing an utter bastard.

‘Day of Anger’ is also notable for featuring one of the most absurdly contrived set-pieces I’ve ever seen in a non-comedic western, wherein some guy appears out of nowhere and challenges Van Cleef to a duel, before specifying that this is to take place on horseback, with powder & shot muskets. Valerii and co. obviously thought the resulting sequence was a big showstopper, but in truth it simply comes across us ridiculous (not least because it causes us to wonder why this sinister stranger specified such an unusual manner of engagement, given that he is apparently not very good at it).

Elsewhere, Riz Ortolani’s music is none the worse for sounding like it was mainly knocked up on a few electric guitars and a pair of bongos, and the movie’s US poster [reproduced above] is one of my all-time favourites. According to IMDB, no less a personage than Paul Naschy pops up here as an extra, but I didn’t spot him.

Despite the attempts of both Gastaldi and Italian critic Roberto Curti to attribute grand mythic weight to ‘Day of Anger’s storyline on the extras to the Arrow edition, this movie is basically a pure potboiler, largely devoid of politics, realism or any but the most basic thematic significance. Whilst it can’t pretend to measure up to the work of the three Sergios or the other one-off masterpieces that comprise the A-list of Spaghettis though, it’s certainly entertaining and, for want of a better word, COOL, enough to give it a top table position on the genre’s B-team.