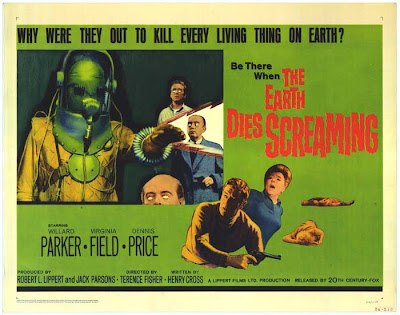 “The Earth Dies Screaming”. Wow. I mean, what can you say to a title like that? Awareness of the cynical processes by which genre movies are named/marketed or not, I’d defy ANYONE not to want to duck into a theatre with that one on the marquee (or, in a more contemporary setting, buy the DVD-R off the guy in Up The Video Junction in Camden market).

As it happens, the promises of the title are broken right from the outset here, as the chilling opening sequence of this British science fiction quickie portrays the world – or at least, the sections of it surrounding a rural English village – dying rather peacefully in its sleep. 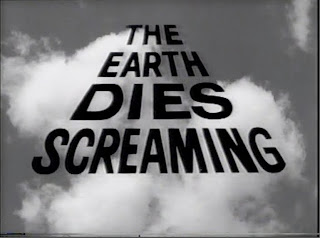 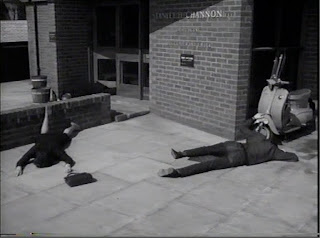 Bodies slump to the ground on the village green. Cars wobble slowly into walls as their occupants suddenly expire. A locomotive crashes off the rails, its crew dead at the controls. What’s going on? 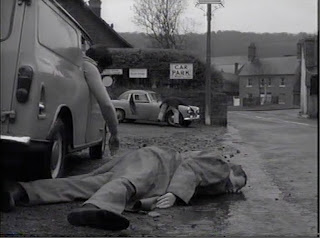 The first living being we see is an American, Major Jeff Nolan, played by Willard Parker. Driving his military landrover into a village square strewn with corpses, he shoulders his rifle and breaks into an electronics shop, where he proceeds to scan the dial on a radio, looking for signals. 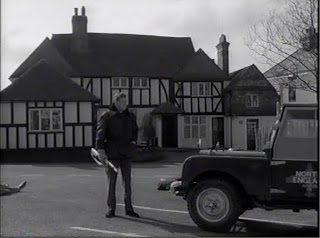 He soon has company when another car pulls into town, containing the friendly Peggy, and a shifty, gun-toting Mr Quinn Taggert, who claims to be her husband. Having established that the intruders aren’t actively hostile, a surviving local couple soon emerge from hiding, and, being broadly sensible folk, the small group of survivors decamp to the comfortable bar of the local hotel to take stock of their situation over some scotch and soda. 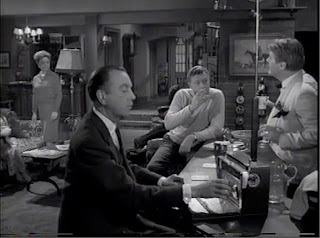 In a development reminiscent of ‘Day of the Triffids’, it turns out that all of the survivors were in enclosed environments when the catastrophe occurred – Nolan was in the air testing an experimental jet, whilst locals Otis and Violet Had sneaked off from a boring party to spend the night in an airtight laboratory, Peggy was in a hospital oxygen tent, and so on. (Incidentally: Otis? Since when was anyone in the British Isles in 1964 called ‘Otis’?) With the certainty that becomes scientifically-minded folks in movies like this, Nolan reasons that England must have been subject to a deadly gas attack. “This was no accident - whoever did this clearly just won the war,” says the pessimistic Mr. Taggart, “Now they’ve just got to move in and take over – then it’s every man for himself." 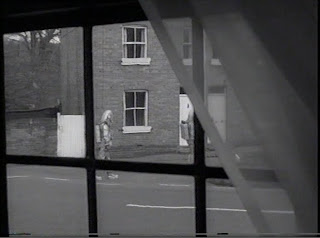 It’s not quite as simple as that however, as the occupants of the hotel realise when a pair of spacemen wander into town. Violet makes the rookie mistake of assuming the spacemen are human and marches out to greet her rescuers, while the others are more wary and hang back. And wisely so, as Vi is unceremoniously zapped by the inhuman figures, falling amid the other bodies as the spacemen move on. 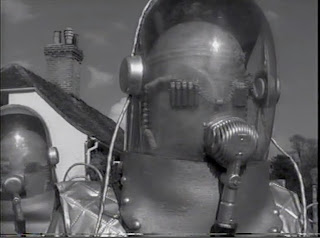 Roving spacemen may sound like a pretty goofy addition to the thus far fairly dour story, but in practice they are incredibly unsettling – whirring robot drones controlled by forces unknown, not dissimilar to the Cybermen who were making their debut in Dr. Who at around the same time, impassively hunting down and disposing of any remaining living creatures. Understandably, the film takes a somewhat darker turn from hereon in, evened out by an additional bit of melodrama as a rebellious youth and his heavily pregnant wife-to-be turn up, having recently run away from home, as the bodies of the deceased start returning to life, and Mr Taggart starts to make his sinister intentions clear. 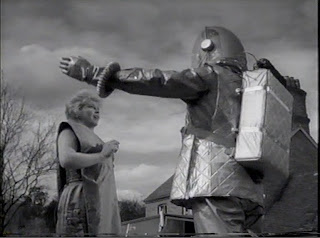 As a film, the main failure of ‘The Earth Dies Screaming’ is also, weirdly, one of its biggest advantages – the fact it is so short it almost seems unfinished. With a running time that only just hits the hour mark, I can only assume the film fell victim to severe budgetary problems, time constraints or was simply kept short in order to make bottom billing on some triple bill line-up. Whatever the case though, the film never really gets the chance to explore its intriguing initial premise in much detail.

Hammer stalwart Terrence Fisher directs as competently as one would expect, and the opening sequence in particular is exquisite, with Elizabeth Lutyens’ brilliantly dissonant score mainlining cold war anxiety as the camera slowly panning up from a corpse-strewn field up into the empty sky as the film’s title descends Star Wars style. 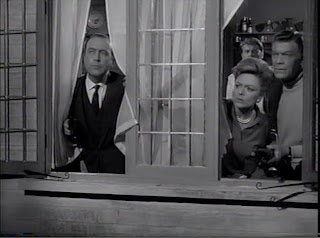 But once things get underway the solid character dynamics that are necessary to keep the survival-horror plotline afloat are so quickly and broadly sketched that they are often flat-out unbelievable. The other characters are universally scornful of Otis’s excess emotion and descent into alcoholism for instance – hey, give the guy a break, his whole world’s collapsed and he just saw his beloved wife zapped to death by spacemen! And the final peril and save-the-day-at-the-last-minute ending the script sets up for our protagonists seems contrived and premature in the extreme.

In spite of all this though, it is the film’s perfunctory nature that also helps it remain so memorable and haunting over forty years later. I’ve been a huge fan of what you might call the ‘polite British apocalypse’ sub-genre ever since I learned to read, when books such as John Wyndham’s ‘Day of the Triffids’ and ‘The Kraken Wakes’ and John Christopher’s ‘The Death of Grass’ were among the first stories to really capture my imagination, with their visions of an eerie, deserted version of normality hiding dark, unseen threats and of the thin veneer of civilization slowly crumbling as hunger and survival instincts take hold. These were sinister ideas of a kind I’d never seen explored on TV or in the family friendly movies I was allowed to watch, but always accompanied by the comforting presence of a rip-roaring adventure yarn, and well-behaved heroes who mean well, believe in the human spirit and treat their people with respect. 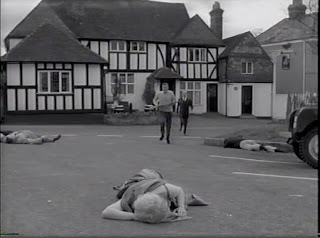 In so far as it is able to with it’s compromised run-time, ‘The Earth Dies Screaming’ captures the atmosphere of these books perfectly – all the more so for the perpetual sense of mystery that surrounds the film. I’ve always been a bit scornful of tidy apocalyptic stories (think the American blockbuster variety) that neatly define and rationalize their scenarios from the outset. Personally I prefer the idea that if an unexpected society-shattering series of events took place, the majority of the populace wouldn’t know what the hell was going on, let alone what they should do about it. And by virtue of simply not having any spare screen time to dedicate to the issue, The Earth Dies Screaming remains beautifully abstract and unsettling throughout.

Who DID kill everybody in the first place, and why? Where did the spacemen come from? Who’s controlling them? Why are corpses coming back to life, and accepting that they are, why only CERTAIN ones? – events move so quickly that the characters barely get a chance to consider these questions, and, rushing along with them, neither do we. Essentially, our initial question of “what’s going on?” remains unanswered throughout the film, right up do the unconvincing “why, this child might be the most important thing on Earth right now” conclusion. Much as in real life, shit just HAPPENS, and the fun comes from seeing the people who remain pull up their socks and react as best they can, or else fail to. 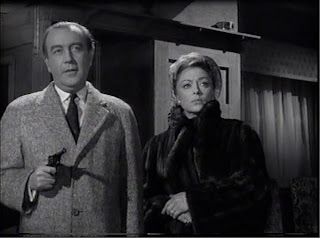 Which brings us neatly to another interesting aspect of “The Earth Dies Screaming” – namely, its curious similarity to “Night Of The Living Dead”. Trying to round up all the disparate movies that may or may not have ‘influenced’ Romero’s masterpiece has long been a popular film-geek parlor game of course, but I couldn’t get the thought out my mind when watching TEDS. The dynamic between Nolan (capable pragmatic hero), Taggart (shifty bald jerk) and the young couple who arrive later seems to directly mirror the character dynamics that made their way into the NOTLD script – not to mention the ‘fighting to protect mother & child in the basement’ angle taken by the finale. Stretching things even further, you could even draw comparisons between the eerie stillness of the opening sequence here, and the similar vistas of urban emptiness that Romero threw into the intros of both ‘Dawn..’ and ‘Day..’, or note the similarities between Lutyens’ menacing, modernist score (which seems to utilise morse code bleeps and radio static) and the droning, echoplexed library cues used so masterfully in ‘Night..’.

Not that I’m accusing Romero of sitting at the back of some screening of this one in Pittburgh in 1965 taking notes or anything you understand, but it’s always interesting to ponder these connections, trace the roots of these ideas, dontcha think? If nothing else, it would make for a great excuse to show “The Earth Dies Screaming” alongside Vincent Price in “The Last Man On Earth” and Powell & Pressburger’s “Tales of Hoffman” in a ‘films-that-kinda-maybe-inspired-NOTLD’ triple bill. 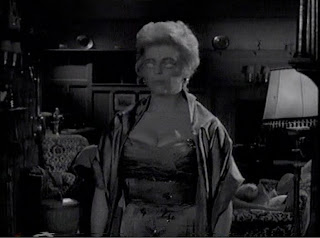 Anyway, back to the matter at hand: The Earth Dies Screaming is a simple but effective mid-century nightmare with a welcome does of cold war paranoia and complete weirdness that helps it remains an hour of brilliantly evocative viewing to this very day. I wish I know where it was filmed – does anyone know? The village looks oddly familiar – I feel like I might have been there at some point. Either way, I want to go there again and wander around soaking up the atmosphere and looking out for spacemen. Don’t laugh – I bet you would too.
Posted by Ben at 15:53

As a fellow ‘polite British apocalypse’ obsessive, I have to see this. All the dead people lying in quiet village streets--this is my sort of thing. From the pics, the village actually look a bit like the one invaded by the Nazis in the Graham Greene film 'Went the Day Well', but I have no idea if it's the same place.