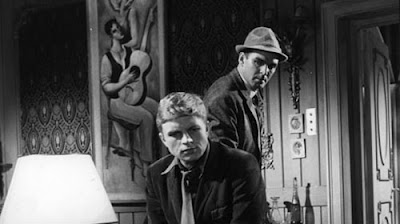 All of Joseph Losey’s major concerns as a director can be seen, admittedly in pretty clumsy fashion, in the earliest of his British films I caught at the BFI, 1959’s Blind Date. A quick, low budget (I’m assuming) whodunit, ‘Blind Date’ gets off to an excellent start, as an aspiring Belgium artist played by Hardy Kruger hops off a London bus with a bunch of flowers, and proceeds to hop, skip and jump his way along the North bank of the Thames to the accompaniment of John Dankworth’s terrific, upbeat modern jazz score. (Mixing lively strings with bebop cool, it’s VERY Miles & Gil influenced sort of stuff – pretty damn fine.) Reaching what we assume to be his lady’s residence – an exquisitely, almost disgustingly, lavish art & antique-filled flat – Kruger finds the door on the latch and wonders in, making himself at home as he awaits her arrival. To his surprise, the police – led by tough Welsh detective Stanley Baker – arrive instead. A dead girl is discovered in the flat’s back bedroom, and poor Hardy is understandably subjected to some serious questioning. So far so good, but things really begin to flag as Kruger’s character begins to recount his affair with the wife of a prominent diplomat (Micheline Presle), instigating a a series of flashbacks, as the dastardly secrets culminating in the murder of a nightclub singer begin to unravel.

‘Blind Date’ is a very well made film, no question – Losey’s powerful eye for detail and claustrophobic use of interiors are in evidence throughout, and the difficult theme of class privilege and public school networks being utilised to whitewash aristocratic scandal is excellently and subtley handled, several years before the Profumo Affair would throw similar concerns directly into the public eye. The scene in which Baker’s working class detective is curtly informed by one of his softly spoken superiors that he’s “perfectly good at solving crimes”, but “fails to understand the wider ramifications of public service”, is chilling. 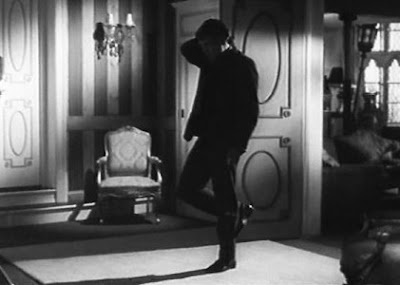 These points of interest aside though, the film is sunk by some major flaws. Primarily: the script is lousy. The relationship between Kruger and Presle, the pivot upon which the rest of the drama is supposed to balance, rings completely hollow, their scenes filled with passionless gestures of unconvincing passion and flatulent pseudo-bohemian dialogue of the “is this what art means to you??” variety. It’s also amusing to see that, in the grand tradition of films about artists, Kruger’s paintings are absolute crap, making his humourless pontificating about the struggle of the artist even more of a chore to sit through. And when the big plot reveal rolls around at the end, ‘Blind Date’ achieves a somewhat unique place in the annals of crime fiction by featuring a trick ending that manages to be both entirely predictable, and also to make almost no sense whatsoever.

Good performances might have saved the day, but, whilst Baker is characteristically solid, both Kruger and Presle ham it up horribly, never managing to convince us that their characters are anything other than thoroughly dislikable, ruining any sense of human tragedy that might have been extracted from the Double Indemnity-esque plotline. 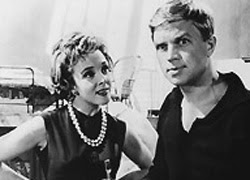 ‘Blind Date’ is not a terrible film by any means, but sadly these failures outweigh its obvious strengths. It could easily be argued that Losey put a lot of himself into the character of Kruger’s painter, portrayed as he is as a deadly serious, socially-conscious artist stumbling into the labyrinthine weirdness of the British class system, but nonetheless, as an early ‘60s British noir I found it decidedly inferior to Basil Dearden’s much-discussed but rarely-screened ‘Victim’ (1961), and I fear it is ultimately best viewed as a curio, or as an interesting precursor to the director’s later work.

(A far more interesting analysis of ‘Blind Date’ as it fits into Losey’s wider work can be read here at Sense of Cinema.)

Much the same mixture of strengths and failures can be seen, on a much grander scale, in one of the most ambitious and troubled films of Losey’s career, the French/Italian co-production Eva. 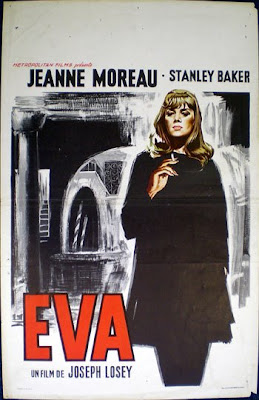 Whilst Losey may have maintained a low profile in the English speaking world, it seems that many in the European New Wave were hip to him from the word go. Apparently his name was being thrown around by the Cahiers du Cinéma critics even before he left America, and a still from the otherwise obscure initial release of ‘The Damned’ even made their cover. With a rep like that on the continent, I guess it was hardly surprising that Losey might have wanted to blow the comparatively stuffy British film industry for the more visionary realm of French and Italian cinema, and it was on that basis that he found himself shooting ‘Eva’ in Italy, with substantial backing from France’s influential Hakim brothers.

Befitting this change of scene, ‘Eva’ certainly marks a sea-change in the director’s approach. Gone are the tight narratives, tight framing and tight budget of his thrillers – ‘Eva’ immediately sets out its stall as a fuckin’ Work Of Art, with capital letters. A deliberate attempt to establish its creator as a cinematic maestro to be reckoned with, it is a sprawling, diaphanous, decadent mess of a movie that exists in any number of confusing variant prints, stretching between two and three hours in length. (The restored print the BFI are showing has been cobbled together Frankenstein style in an attempt to recreate the director’s original cut – as a result, some scenes are blighted by irremovable Norwegian subtitles, and image quality varies throughout.) 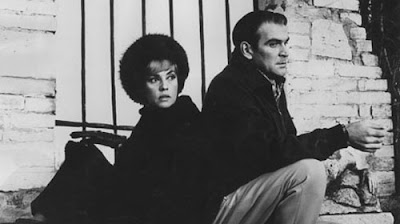 In purely visual and technical terms, the film is astonishing. Losey may have toyed with a distinctive palette of architecture, furnishings, artworks, shadows and reflections in the mise en scene of his previous films, but here, in the heart of European opulence and off the leash of commercial cinema, he just goes bonkers, filling every available space with rich, dramatic texture than almost overshadows the human drama. Rarely have Venice and Rome been rendered so exquisitely on film, and with Stanley Baker, Jeanne Morreau and the beautiful Virna Lisi mooning around them to another killer jazz soundtrack (this time by prolific French soundtrack composer Michel Legrand), it’s hard not to just sit back and let ‘Eva’s gorgeous aesthetics roll over you like a velvet tank. Stuffed to the gills with jagged juxtapositions and sledgehammer visual symbolism, it’s rare that five minutes goes go without me wanting to hit ‘pause’ and exclaim “now THAT’S a fucking shot!”

The elephant in the room though is of course, Fellini. To say that ‘Eva’ was very much working within the new blueprint for European film that Fellini had perfected with 1960’s incomparable ‘Le Dolce Vita’ would not be to take anything away from Losey and his collaborators. But with its labyrinthine party scenes, its gratuitous nightclub acts, and snatches of overheard conversation..? With its high-heels clattering across nocturnal cobbled streets, its glistening fountains, fast cars and strained attempts to be as Italian as it possibly can..? With its virile male protagonist staggering senselessly between alluring women and endless insane scenarios without pause for upwards of two hours…?

Let’s just say that, for much of its running time, ‘Eva’ approaches a homage to Fellini in much the same spirit that Ronnie Biggs might be dubbed ‘the great train-homager’. (Joke courtesy of Stephen Fry on ‘I’m Sorry I Haven’t a Clue’ the other week). 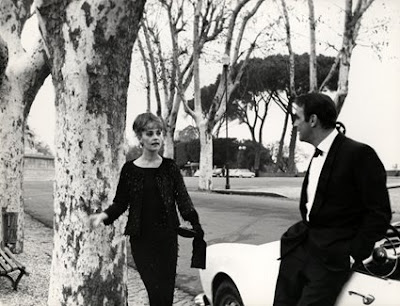 Nonetheless, ‘Eva’ is blessed with more than it’s fair share of shattering pure-cinema moments and images liable to live on in one’s mind forever, and it could still have emerged from Federico’s shadow to become a powerful film in its own right. But, as with ‘Blind Date’, it’s the poor handling of narrative that eventually sinks the picture. Admittedly, ‘Eva’s more sprawling and amorphous nature doesn’t call for the same tight plotting as the earlier film, but still, every time the director tries to convince us that this is a serious and profound exploration of human feeling, its pulpy origins in James Hadley Chase’s source novel can’t help but shine through, veering into the realm of unintentional camp, as situations become increasingly fatuous and melodramatic, and characters’ motivations remain distinctly unbelievable.

The film left me with frankly no idea why Stanley Baker’s ambitious Welsh novelist (a walking cliché of the ‘shrewd-boyo-made-good’, for all of Baker’s attempts to invest him with more depth) would want to betray his clever and charming movie star fiancée (Lisi) for Moreau’s frankly shifty and less attractive (relatively speaking) courtesan, and vague intimations of potboiler-style ‘uncontrollable passions’ fail to fill the gap, leaving us with the impression that Baker’s character is simply some kind of mixed up fool, instantly sabotaging the empathy we’re supposed to share with him later as his carefully-crafted persona begins to collapse and his life disintegrates. 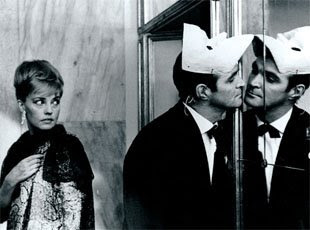 Enjoyable as the film may be if viewed out of context, or as a sumptuous relic of a now distant era, there is a faintly desperate feeling behind ‘Eva’ that is hard to ignore. Shot at the same time as Fellini was preparing to unleash ‘8 1/2’ on an unsuspecting world, during that brief window in which Italian culture, Italian fashion, Italian cars, French art cinema and American jazz were the last word in untouchable cool, it gives the impression of an Anglo-American director overreaching himself massively in an attempt to ingratiate himself with the continent’s tastemakers in the most garish and obvious way possible, abandoning in the process most of the elements that had initially attracted the French critics to his work.

By all accounts, Losey put his heart and soul into realizing ‘Eva’, and brooded for years over the way its near total failure in the face of producer-enforced cuts and botched distribution killed his attempt to establish himself as a European auteur. But, as the chap who introduced the BFI screening pointed out, Losey’s failure is our gain, as he returned to England tail between his legs and immediately proceeded to make what’s generally regarded as his masterpiece, and perhaps one of the greatest British films I’ve ever seen, 1963’s ‘The Servant’. 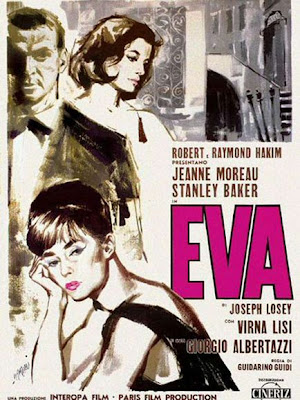