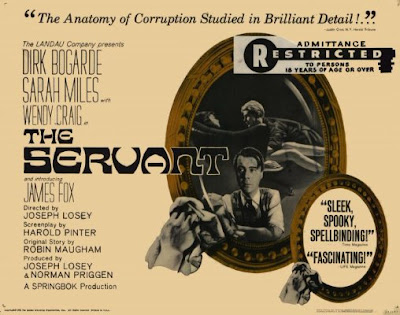 To be honest with you, I’m a bit lost for words when it comes to trying to find something original to say about Losey’s ‘The Servant’.

In fact I’m embarrassed that not only had I never seen the film before, I’d never even heard of it. The reach of ‘The Servant’s critical and cultural impact on UK cinema is, it seems, widespread, and rightly so.

Rarely have I seen a film that is this perfectly realised – the script, the direction, the performances, the production design – all are as good as they could possibly have been, and all serve to create the kind of masterpiece that happens once per generation when the multitude of strange, tempestuous elements that go towards creating a motion picture – the same elements that Joseph Losey in particular seems to have struggled with throughout his career – all find themselves arrayed in glorious alignment toward a common goal.

My mum certainly remembers going to see ‘The Servant’ back in the day. Probably not in 1963, but at some stage. She recalls the film as being “chilling, absolutely chilling”, the vehemence of which conclusion surprised me. Because, well, yes, Dirk Bogarde’s astonishing against-type performance as Barrett, and the way he slowly transforms his character’s mannerisms and motivations, seeking to conceal his true face from the audience as much as from James Fox’s Tony, implicating us in the same kind of listless weakness he is seeking to exploit in his master… that is indeed chilling. 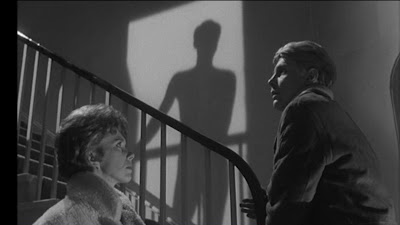 But chilling-ness aside, my primary impression upon leaving the cinema concerned the extent to which the film was really funny, of how fresh and irreverent the wit of Harold Pinter’s script seemed, and of how honest and unforced the laughter it provoked was, even forty or fifty years since Pinter’s name disappeared ‘neath a cloud of tedious theatrical pomp. Not to mention how real, and human, and basically likable both Bogarde and Fox manage to make their characters, despite the razorsharp maze of petty hatreds, personal failings, ambiguities, betrayals and collapses that the film subjects them to at every turn – in both cases, enough to reduce most lesser actors to cynical cut-out villains rather than the fully fleshed out, empathetic beings that the players give us here. I mean, it is entirely possible that Barrett doesn’t utter a word of truth or carry out any benevolent action throughout the film, but, as portrayed by Bogarde, it’s difficult to hate or fear him, even as he pulls the wool over our eyes for his own mysterious and destructive ends.

Also on my mind was the extraordinary manner in which Losey’s command of unsettling, baroque mise en scene reaches its apex here, with a carefully balanced language of expressionistic framing and visual symbolism almost managing to take on a life of its own in parallel to the scripted narrative, frequently commenting on, expanding upon, and sometimes even venturing to suggest meanings that go way beyond, the on-screen action.

(An excellent examination of visual symbolism in The Servant can be found here, although I would strongly disagree about the importance the writer seems to place upon the film's extremely vague homoerotic subtext.) 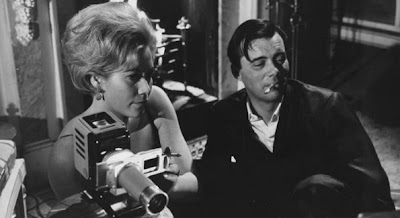 I’m sure that ‘The Servant’s central themes – in particular, its vicious assault on the interconnecting webs marking out the boundaries of personal identity, social position, class background and sexual propriety in mid-century British society, explored on both a microcosmic and macrocosmic level – have been exhaustively examined and discussed in print by more gifted and insightful writers than I. And I’m sure that to aimlessly trudge through a blow-by-blow plot synopsis of such a fine film would fail to do justice to the beautifully subtle means by which Pinter and Losey reveal their tale to the audience.

And similarly, it is a film which is hard to lavish the necessary amount of praise upon, without appearing to lapse into driveling, meaningless hyperbole. I could fill pages outlining individual moments from the film I thought were particularly breathtaking, but, described rather than seen, and removed from their carefully curated context, their significance would be lost. Basically, I’m tempted to just take the easy way out and to urge all readers to go and see this film. The DVD is widely available – we can talk about it afterwards if you like. No matter what your wider cinematic interests may be, you’d have to go a long way to find a better film than this one.
Posted by Ben at 13:36