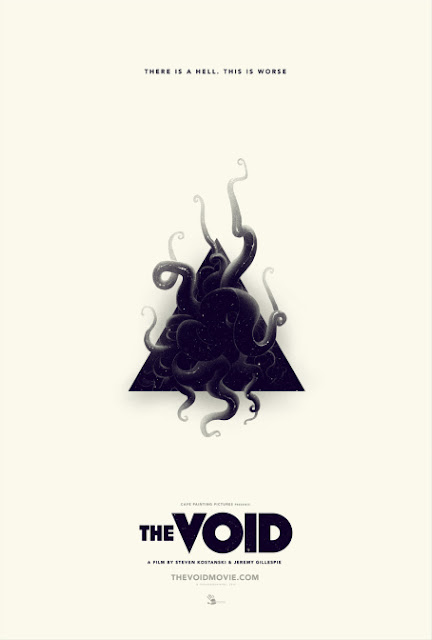 Our token new movie for this Halloween season, and I’m sad to report that, despite a “can’t miss” outlay (heavily Carpenter-influenced action/survival horror about inter-dimensional Lovecraftian beastliness breaking loose in an isolated hospital) and a fair amount of positive word of mouth, ‘The Void’ never really came together the way I wanted it to.

Don’t get me wrong, there’s a lot of good stuff in here - some solid performances, genuinely fearful notions, great practical effects and a few eyebrow searingly intense moments, but, for all its good references and technical acumen, it felt to me like a film that never quite got the drop of what it wanted to be, or how it intended to get there.

To get straight to the heart of one of the film’s biggest problems, well… let’s put it this way: ‘Assault on Precinct 13’, ‘The Thing’, ‘Prince of Darkness’, ‘Halloween’, ‘Reanimator’, ‘The Resurrected’, ‘Possession’, ‘Hellraiser’, ‘Night of the Living Dead’, ‘The Beyond’.

Did I miss any, guys? Let’s swap lists and compare.

I normally have a pretty high tolerance for in-jokes and cultural references in cinema, to the extent that I’d normally be perfectly happy for filmmakers to let me know in no uncertain terms that they think any of the items on the above list are really cool, but, even by the furthest reaches of what it allowable in a post-Tarantino world, there are limits.

If Gillespie & Kostanski were merely making a fun monster romp, their decision to pay tribute to the aforementioned inspirations, not by harnessing the ambition, atmosphere or imagination that made them so memorable in the first place but instead merely by shamelessly imitating bits of them, might have flown ok with me.

For better or for worse though, that is not what they’re making (or at least, I don’t think it is – like I say, there is some confusion of intent here), and ‘The Void’s combination of fan service-level borderline plagiarism with a tone of deadly seriousness, bordering on outright solemnity, sat poorly with me.

This then leads us neatly on to second big problem, which to be honest is the one that really irked me. Throughout the film, I found there was an uncomfortable disjuncture between ‘The Void’s ostensible identity as a gore n’ tentacle splattered, shotgun-blasting self-aware horror movie, and its apparent desire to simultaneously Address Serious Themes – an ambition it achieves only in a manner both humourless and heartless, badly harshing the buzz of the movie’s horror aspects in the process.

If I might broaden our scope slightly to make a more general point: although literary theorists in recent years have had a field day expounding upon the ego-crushing existential vanishing point of the ‘cosmic horror’ sub-genre pioneered by H.P. Lovecraft, it is nonetheless instructive to remember that, for those of us who enjoy these stories of universal doom and hopelessness, they represent a form of escapism just as potent as any sword n’ sorcery fantasy.

To not put too fine a point on it, when we find ourselves contemplating the slumbering survival of Great Cthulhu and the forthcoming epoch of madness and extinction, we have basically just found another way to temporarily excuse ourselves from the more day to day miseries of disease, poverty, loneliness and stress. Like losing oneself in a floor-shaking doom metal record – or, hey, why not a horror movie? - the darkness of an aesthetically stylised annihilation becomes a comfort blanket, much the same as any other.

By seeking to place issues regarding the grief that follows the death of a child and the subsequent damage inflicted upon relationships and/or mental health at the centre of their story, Gillespie & Kostanski cross the streams of this particular equation rather heinously, making it difficult to enjoy frequent cutaways to some “hey dude, remember that bit from ‘The Thing’?!” kind of scene whilst also leaving the ‘real world human emotion’ stuff feeling inauthentic and crass, handled as it is in the frowning, hand-wringing manner of a TV mini-series tearjerker.

That’s not to say of course that such subject matter can’t or shouldn’t be explored within a pulp fiction context – far from it. But there’s a way to do it and a way NOT to do to it, y’know?

For a particularly egregious example of the way that ‘The Void’ keeps flubbing it, look no further than the nigh-on-unbearable sequence during the build up to the film’s finale wherein, for a few moments, it looks as if a terrified, untrained medical intern is going to have to perform an emergency caesarean section upon a traumatised pregnant woman, whilst an elderly man with a hand weapon keeps guard against the faceless murderers who may or may not be roaming the corridors outside.

Now, I must declare a personal ‘thing’ here, in that anything involving pregnancy, birth and new-born children in a violent/horror context always twists my guts and freaks me out something rotten. As such, you will appreciate that watching this scene was not a terribly happy experience for me, but regardless.

The point is, when it is subsequently revealed that both mother and child are actually mutated minions of the film’s demonic/alien evil, I can’t imagine I was alone in experiencing not the shock and horror that the filmmakers presumably intended this (fairly predictable) revelation to evoke, but instead simply feeling relief that we were back in the fantasy realm of monsters and special effects, and no longer needed to deal with the more tangible reality of that other scene. Which is all pretty ass-backwards if you take a second to think about it.

On a more prosaic level meanwhile, whilst ‘The Void’ is undoubtedly shot and edited with admirable skill, its core visual storytelling often feels weak in a manner common to many 21st century films. Despite their painfully obvious veneration for the John Carpenter canon, the filmmakers don’t seem to have fully appreciated that, when a director like Carpenter staged this kind of tense action/survival scenario, he presented it to us simple, uncluttered fashion that allowed us to easily understand the logic of what was going down on the ground level.

I had initially composed several paragraphs of reactionary, old man griping on this subject, but... nobody needs that, so I've nixed them for now. Let's just say that, whilst of course I wouldn’t advocate a return to the freedom-crushing excesses of a top-down studio system, this is the kind of for-the-love-of-it indie movie that I find myself thinking could have benefited from some cigar-chewing exec locking the ‘creatives’ in the editing room until they got their shit together and gave him a sellable picture.

In writing this, I seem to have ended up being considerably harsher on ‘The Void’ that I intended to be. There is honestly a lot of good stuff here. It’s certainly a hell of a lot better than the most contemporary low budget horror films, that's for sure, but…. there’s nothing that invites a bad review so much as a movie that *almost* makes the grade, is there? One that has all the right moves but just keeps slipping up when it matters.

Ah well, don’t take my word for it – give it a watch yourself and draw your own conclusions. If you’re interested in contemporary horror movies, it’s worth your time at the very least.

Good review.
I watched it a while back and was kind of annoyed at it for being a reverse gestalt... a cocktail of my favorite things that somehow LOST flavor in the mixing.

I've had similar reactions to 'near miss' movies full of stuff I oughta like.('YellowBrickRoad' being a particularly painful example.) There's certainly no denying the sources of this one. But I loved it! I think it's down to the fact that for whatever reason, the grimness struck a chord with me, when it just jangled for you. As well as the Carpenter lifts I also felt there were touches of 'Phantasm' and 'Hellraiser' and there's some dark shit in those films for sure. Still, horses for courses, and as ever, your view is good reading and valued. Thoroughly enjoying the Halloween marathon!

You left out 'Species 2'... the puppet monster at the end.