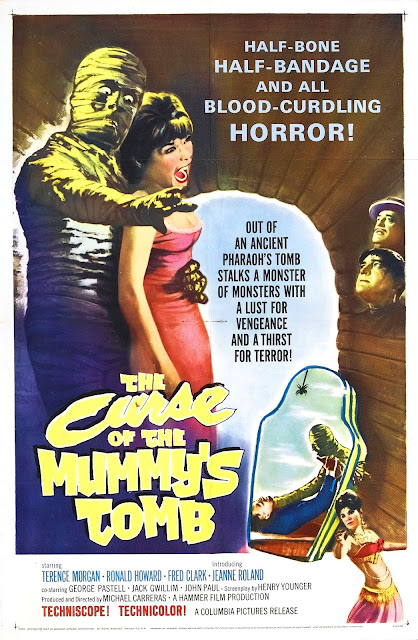 It’s funny how, when it comes to mummy movies, the fortunes of Hammer’s entries in the sub-genre during the 1960s/70s almost exactly mirror the pattern established by Universal three decade earlier – i.e., an artistically accomplished but commercially under-performing initial film, belatedly followed by a series of considerably less ambitious, lower budgeted sequels that are generally considered the lowliest entries in their respective catalogues of horror movies.

Could this really have been an accidental case of history repeating itself, or were James Carreras and Tony Hinds to be found flicking through The Big Book of Movie History in the early 1960s, asking “right, where did Universal go next”..?

This many decades down the line, who can say, but, either way, I have an inexplicable fondness for the mummy sequels of both eras, and I feel that Hammer’s efforts in particular get an undeservedly bad rap. ‘Blood From The Mummy’s Tomb’ (1971) is a fine example of weird, contemporary-set ‘70s UK horror, and whilst ‘The Mummy’s Shroud’ (1967) is certainly no classic, it nonetheless has some strong elements and is, I believe, a lot better than its dismal critical reputation would tend to suggest.

That just leaves us then with 1964’s ‘The Curse of the Mummy’s Tomb’, which until this month was one of the few Hammer horrors I had never seen. So, now that I’ve finally ticked it off the list – time for a review!

And, well – ahem - this one is a b-movie alright, there’s no question about that. Written, produced and directed by son-of-the-boss Michael Carreras, ‘Curse..’ might as well begin with workmen constructing the sets behind a board reading “utilitarian supporting feature mummy movie in progress – apologies for any inconvenience”, such is its straight-down-to-business determination to deliver the expected mummy movie ingredients with a minimum of fuss.

Set in 1900, what we have here is an entirely predictable tale of an ersatz-Carter archaeological team uncovering the lost tomb of the great Pharaoh Ra-something-or-other, and falling victim to the titular curse when they ill-advisedly go against the advice of the Egyptian government(!) and ship the whole caboodle back to London.

The Egyptian stuff in Carreras’s script (written under his Henry Younger pseudonym) seems to have been derived purely from comic book cliché without the slightest resort to genuine reference material, and… basically things proceed exactly as you would expect them to within the established remit of a mummy movie, so I won’t bore you with the details.

The only note of narrative interest in the initial plot set-up arises from the conflict between the earnest archaeologists (Ronald Howard and Jack Gwillim) who want to see their discoveries properly persevered in a museum, and the crass American huckster who funded their expedition (Fred Clark), who wants to take the Pharaoh’s mummy on the road as part of a corny sideshow attraction.

Reading between the lines, I can’t help but speculate that this plot line might to some extent have reflected tensions within Hammer at the time; as Terrence Fisher, Cushing and Lee all laboured away on the creatively ambitious but somewhat uncommercial The Gorgon, might Carreras have felt himself charged with saving their bacon by knocking out a goddamn, no-nonsense mummy picture to pull a few undemanding punters into the ensuing double-bill…? Again, who can say.

Leaving such speculation aside and getting down to business however, ‘Curse of The Mummy’s Tomb’ suffers in the first instance from a notable lack of recognisable Hammer ‘faces’. Which is not to say that the cast members who are here don’t acquit themselves perfectly adequately, but the lack of the kind of larger-than-life presence that even Hammer’s ‘second division’ leads like Andrew Keir or Andre Morell could have brought to proceedings is sorely felt.

Probably the most charismatic person on screen in fact is leading lady Jeanne Roland, who, speaking with what I assume to be her natural French accent, emerges as one of the most dynamic and adorable of Hammer’s ‘60s heroines, even though, regrettably, her character is appallingly written – a supposedly intelligent, highly educated woman who becomes a simpering ninny the moment obvious villain Terence Morgan puts the moves on her, casually two-timing her fiancée without even seeming conscious of her actions. (“Do you know, you are the first man I’ve met who has ever realised what a home can mean to a woman,” she tells Morgan in one particularly cringe-worthy moment.)

Accompanying this casual misogyny meanwhile, we have some wholly predictable casual racism too, as the Egyptian characters (primarily represented by Hammer’s go-to guy for ‘ethnic’ roles, George Pastell) are portrayed as a sly lot of fez-wearing so-and-sos who all live in tremulous fear of their Old Gods (when they’re not sneaking about stealing and murdering on their behalf, that is) - even within the highest echelons of the nation’s government, or so it is implied.

Whilst we’re at it, it should also be mentioned that the mummy himself, when he eventually turns up, is a bit of a let down. To be frank, stuntman Dickie Owen looks a bit chubby in his costume here, which is not really what you want from a mummy (I’m reminded of the fat skeleton in Shaitani Dracula), and I’m pretty sure you can see the outlines of his clothes poking through the bandages slightly too. Not so good. Several of the rejuvenated Pharaoh’s ‘shock’ entrances meanwhile seem directly modelled on those of Christopher Lee’s far more impressive and intimidating regent in 1959’s ‘The Mummy’, to sadly deflated effect.

‘Curse..’ is at least extremely gory for a 1964 UK horror, revelling in the inclusion of several severed hands, and a rather startling scene in which the mummy crushes a character’s head beneath his bandaged boot – the latter prompting a hilarious moment when a shocked police inspector, having just witnessed this ghastly incident, instructs his men to “follow it, see where it goes… but best keep a safe distance”.

The scene in which mummy tosses the body of Clark’s character into an (off-screen) Thames, shortly after the latter has gallantly gifted a few guineas to a shivering prostitute, also has a gleefully pulpy feel to it, as do some nocturnal ambushes and sundry sneaking about in the Professor’s fire-lit study.

In fact, ‘Curse…’ is largely saved from ignominy by the sheer dedication and technical acumen of the crew behind the camera. Bernard Robinson’s detail-packed sets often belie the obvious cheapness of the production, and, skilfully lit by hands unknown, Otto Heller’s surprisingly lavish scope cinematography emerges as absolutely gorgeous in places. The film is tightly paced, with some sinuous camera movements and effective POV shots keeping things visually interesting, whilst Carlo Martelli provides a score that is livelier and more varied than the usual James Bernard bombast, despite hitting up the expected “middle eastern” signifiers as shamelessly as you might expect.

All of this helps ensure that, in spite of the aforementioned deficiencies, that inimitable Hammer ‘feel’ is in full effect here, as reassuring as a roaring fire and a glass of sherry on a cold winter’s eve. Against all the odds therefore, ‘Curse of The Mummy’s Tomb’ remains eminently watchable throughout, standing as proof that, during their Bray years, Hammer couldn’t make a truly bad horror film even if they tried (which certainly seems to have been the case on this occasion).

Jeanne Roland is a very interesting actress with a too- short CV. She now lives in Miami Beach. Her mother was Burmese, her dad English. She was born in Burma and moved to London as a child with her sister who was also an actress/model. Her last credit seems to be in the great UK series The Champions in 1969. She's one of those actresses you can't take your eyes off.

She's the best asset of Curse of the Mummy Tomb although her voice was dubbed according to authors Susan Cowie and Tom Johnson in their book The Mummy In Fact and Fiction. The voice artist was probably Nikki van der Zyl who revoiced many Hammer and 007 actresses. Richard Klemensen would know for sure.

The poster art for Curse is the worst-ever, horrible artwork. It looks like the artwork you'd see on a bootleg VHS tape in Jakarta video shop.

Fred Clark cracks me up every time in this one. I think it has to be responsible for the entire literary career of Douglas Preston & Lincoln Child ("Relic").