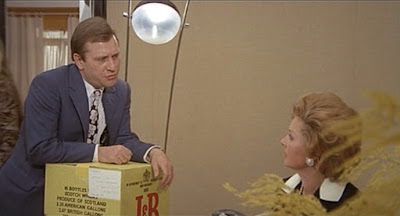 "Delivery for Breakfast In the Ruins..."

When life hits hard, geo-political certainties crumble and potential movie-watching time is compressed into aggressively fenced off, sub-ninety minute blocks once or twice a week, there is only one place for jaded cinephiles to turn for an instant hit of the good stuff: Italy. And I’m not talking Pasolini and Visconti, y’know what I mean.

The “long ‘70s” (running roughly, say, ’69 to ’83?) marked an era in which filmmakers toiling in the grimier depths of Italy’s popular film industry asked nothing of their audience, but gave them everything. Like tireless fry-cooks dishing out the cholesterol to a crowd of famished construction workers, their product might not be good for you (in any sense), but nonetheless it delivers, with a spirit of perverse generosity that it is difficult not to admire. Garish, cynical, gratuitous, delirious – it rarely fails to hit the spot.

As such, I’ve recently found myself catching up on a number of classic examples of Italian exploitation that I had never actually taken the time to sit down and watched before – possibly as a result of some misguided aspiration toward good taste, or possibly a lack of living quarters that allowed me to screen such raging crap without judgment – who knows, and who cares. This summer I’ve been making amends, and enjoying the hell out of it.

If cornered, I’ll still vigorously insist that I have little or no interest in cannibal flicks, Nazi flicks or post-‘Last House On the Left’ rape flicks, but, as we gently touch upon some of those tropes in the posts that follow and come out smiling, those still occupying the moral high ground may wish to note that standards ‘round here are slipping.

Reviews beginning tomorrow, and running intermittently for the next few weeks, I hope.

(The screen-grab above comes from Massimo Dallamano’s ‘Si Può Essere Più Bastardi Dell'Ispettore Cliff?’, aka ‘Blue Movie Blackmail’, aka ‘Super-Bitch’ (1973), which is not included in this series of reviews, but should be, because it is brilliant, and probably as much fun as all three of those titles combined.)
Posted by Ben at 18:49