Arrow Round up:
The Rambling Guitarist
(Buichi Saitô, 1959) 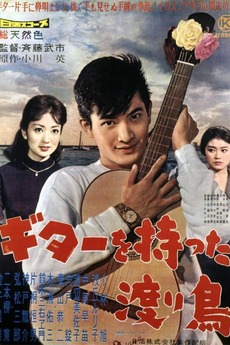 When I first began reading up on Japanese cinema a few years back, I’ll confess I found Nikkatsu studio’s oft-referenced “borderless action” style a difficult concept to grasp. From my clueless Western perspective, the Nikkatsu films I had seen up to that point didn’t seem particularly noteworthy for their globe-trotting agenda or concentration on “action”. On the contrary, they seemed fairly conventional stories of Japanese people doing things in contemporary Japan, so… what’s the big idea, y’know?

Having now read (and more importantly, watched) far more widely around the subject however, I hope I am more able to appreciate the extent to which Nikkatsu’s house style from the mid/late ‘50s onwards represented a significant departure from the established norms of Japanese commercial filmmaking, immediately differentiating the studio’s output from that of its competitors.

Watching films made by those competitors during the ‘50s and ‘60s – be they Daiei historical dramas and ghost stories, Toho prestige pictures or Toei ninkyo yakuza productions – it soon becomes clear that the ethical and social imperatives guiding their narratives are of a very different order to those we take for granted in the West, reflecting (if not always uncritically) the complex patterns of mutual responsibility and obligation that underpin Japan’s unique social order.

A Toei yakuza in a contemporary-set film may adopt Western dress and (to a certain extent) Western habits, but his goals, and the ways in which he goes about achieving them, will be very different to those of a French or American gangster, and it is this basic difference in narrative drive that can sometimes make such films a tough gig for non-Japanese viewers to fully engage with.

As a result, the phenomenally popular ninkyo sub-genre of the early 1960s remains largely off the menu to us subtitle-dependent crime movie fans, whilst even the more widely celebrated jitsuroku (‘True Account’) films of the early ‘70s have a tendency to leave unprepared foreign viewers emotionally sideswiped when they reach the inevitable blood-soaked conclusion - feeling as if we should be sharing in some grand emotional catharsis, but unable to put the pieces together well enough to understand quite what form it should take.

Returning to Nikkatsu’s output with this background in mind, their “borderless action” concept – concisely defined as an attempt to tell stories which are “IN Japan, but not OF Japan” - suddenly begins to make a whole lot of sense. To the Western viewer, the studio’s run-of-the-mill genre programmers (as opposed to the work of their more audacious and experimental directors, which we’ll leave to one side for the moment) feel breezy, comfortable and familiar. Far more explicitly modelled on American (and to some extent European) templates, they still strive to tell distinctly Japanese stories, but recalibrated to fit a frame of reference that those raised on classic Hollywood thrillers and European melodrama can immediately understand.

This approach, together with Nikkatsu’s co-operative approach to licensing their back catalogue for foreign release, has helped make the studio’s output feel far more prominent for overseas fans of Japanese cinema than it presumably would have been for contemporary domestic audiences, but nonetheless, it is worth noting that Nikkatsu certainly didn’t have foreign distribution in mind when they concieved their “borderless” style. Rather, our easy enjoyment of their films today is an unintentional by-product of the studio’s deliberate attempts to cultivate a younger, more cosmopolitan audience within Japan itself, targeting a segment of quasi-rebellious, pro-Western youth whose aspirations had thus far been largely ignored by the other studios.

With the shadow of Japanese national identity thus looming over them like a particularly aggressive elephant in the room, Nikkatsu’s contracted filmmakers were left with several options for fulfilling their “borderless” agenda. On the one hand, they could choose to simply ignore Japanese culture altogether, as can be seen in such gangster films as Yasuharu Hasebe’s ‘Massacre Gun’ and Takashi Nomura’s pointedly titled ‘A Colt is My Passport’ (both 1967), creating an eerie trans-Pacific urban dreamland in which to play out universal dramas that, with a few tweaks here and there, could just as easily have taken place in Paris or Chicago.

Or, more interestingly, Nikkatsu’s directors and scriptwriters could kick the proverbial elephant in the guts (so to speak) and use the “borderless” blueprint to directly explore the cultural dislocation of life in post-WWII Japan, thus cementing the themes that drive many of Nikkatsu’s best (or at least, most interesting) films. Foreign characters (who pretty much never appear in other Japanese films of this period) are frequent visitors to Nikkatsu’s world, whilst their melodramatic youth films are often set near ports or American airforce bases, and make great play of dramatising the reactions of young people to the brand names, pop music and other exotic imports that characterise such transitory, almost literally borderless, locations.

Within this mixed up world, the heroine of Noboru Kaji’s frothy ‘Whirlwind of Love’ (1969) flits around Tokyo channeling Audrey Hepburn in a very un-Japanese fit of perpetual romantic indecision, whilst Tamio Kawachi’s rich buddies jet off to The Alps, where they still somehow manage to swig from bottles of Asahi, in Koreyoshi Kurahara’s The Woman From The Sea (1959). In Kurahara’s ‘Black Sun’ (1964), Kawachi’s jazz-obsessed drop-out gabbles away to Chico Roland’s rogue GI in fragments of broken English, whilst the best entries in the Stray Cat Rock series (1970-71) poignantly explore Japanese youth’s love / hate relationship with American pop culture and the colonial ambitions it represents.

If you’re wondering what in the hell all this extended scene-setting has to do with assessing the merits of Buichi Saitô’s ‘The Rambling Guitarist’ (as released for the first time with English subs on Arrow’s recent ‘Nikkatsu Diamond Guys’ set), well, the truth is that, basically, it is a film about which I can find very little to say, beyond the broader context provided above.

Whilst global cinephiles might have been introduced to Nikkatsu through the ground-breaking work of auteurs such as Kurahara, Kon Ichikawa and of course my man Seijun Suzuki, in truth those directors were all outsiders, whose best work stood out simply because it went against the grain of official company policy. Beyond the sheer novelty of their “borderless” ideology in fact, the vast majority of Nikkatsu’s pictures were extremely conservative in stylistic terms, with studio bosses demanding a steady schedule of slick, crowd-pleasing vehicles for their ever-expanding roster of proto-idol heart-throb star performers – a phenomenon of which ‘The Rambling Guitarist’ represents a quintessential example. In case you’re wondering, that means Saito plays it safe and sticks firmly to the former of the two categories I outlined above.

Seemingly modelled on the light-weight formula of Elvis Presley’s early movies (minus most of the music), the film sees charismatic, guitar-strumming drifter Akira Kobayashi arriving in a small seaside town where, in classic Zatoichi style, he soon becomes embroiled in a feud between the local yakuza clan, sparking up a romance with the daughter of the slightly less nefarious of the two bosses (played by Nobuo Kaneko, whom you recognize from his role as the perpetually scheming Yamamori-san in Kinji Fukasaku’s ‘Battles Without Honour & Humanity’ saga) and obtaining an advanced apprenticeship in yakuza cool from the ubiquitous Jô Shishido - who looks just as bad-ass as ever here, prior to his regrettable ‘hamster cheeks’ plastic surgery disaster, and sporting some nifty powder blue duds.

Fast-paced, brightly and beautifully photographed in no-expense-spared colour and full of likeable characters, easily resolved moral dilemmas and much romantic beach-side moping, ‘The Rambling Guitarist’ is seventy-something minutes of the finest undemanding, professionally rendered entertainment that Japan’s commercial movie industry had to offer.

A showdown on a fishing boat between Kobayashi and Shishido is a particular highlight (apparently, ‘60s yakuza liked to retain their uniform of tailored suits and shades even when crewing on a sea voyage), but that aside, basically everything here falls out of one’s brain immediately after viewing, leaving little behind beyond a vague feeling of having been satisfactorily entertained - which, I suspect, is exactly the way the big-wigs at Nikkatsu liked to do business.

Mildly diverting tales of happy-go-lucky drifters hanging out with chicks on the beach may not necessarily equate to essential viewing for us 21st century, first world viewers, but if you can put yourself in the shoes of someone born into the hunger and chaos of 1940s Tokyo, with nothing to watch at the flicks except endless tales of doomed, conscience-stricken Samurai, then innocuous films like ‘The Rambling Guitarist’ can take on a new significance. Steeped in what now seems a strain of forlorn, nostalgic optimism, they offer a fleeting fantasy of unburdened personal freedom that can speak just as strongly of the hopes and fears of Japanese youth at this point in time as any of their national cinema’s more weighty offerings.