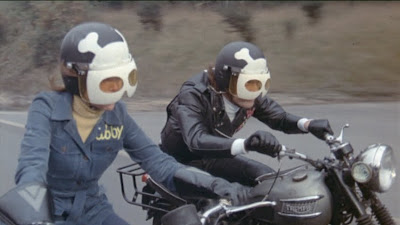 ‘Psychomania’ first entered my life, as it entered the lives of many people in this country I suspect, through a late night TV screening. Back in the glory days when they used to fill early morning airtime with old horror movies, the BBC used to pull this one out of the hat on a surprisingly regular basis.

For a while a few years back, I remember that I had a VCR on which the ‘record’ function had broken or something, and my brother used to occasionally video stuff I might like off the TV for me. One day he called me up, and said something to the effect of hey, there’s this thing on tonight called ‘Psychomania’ – British movie, 1972, about a gang of bikers who get turned into zombies or something - sounds like your sort of thing, d’you want me to record it for you? Yeah, sounds great, I said, and thought no more about it.

The next day, my brother, not usually a big horror movie enthusiast, called me again. “I’m watching that movie, ‘Psychomania’, right now,” he said “and it’s… extraordinary – seriously, you’ve got see this.” He described it to me as being completely unlike a conventional horror movie, and more like some offbeat comedy/drama in which incredibly bizarre supernatural things keep happening. In retrospect, and with more understanding of the aesthetic landscape of low budget British movies in the early ‘70s, I’m not sure if that’s really an accurate description, but I definitely see where he was coming from. Although the film’s imagery and plot-line, and its sinister opening sequence, immediately mark it out as horror, there is something that from the outset is different about ‘Psychomania’ - something utterly unique and sublimely weird.

For one thing, all of the violence in the film (and it ends up with a pretty high body count) either takes place off screen, or is played for laughs. None of the usual tension and titillation of a violent horror film is even attempted. In fact, there is something almost quaint about the film: along with the lack of explicit bloodshed, absolutely no reference is made to sex or drug use, and there isn’t even any bad language (unless you count the petrol station attendant’s immortal cry of “I’ll teach you a lesson, you long ‘aired git”). For a movie that is ostensibly about anarchic undead bikers unleashing a whirlwind of havoc upon the British countryside, ‘Psychomania’s wholesome and genuinely quite humane approach to the material is as mystifying as it is delightful. Quite why the film was initially released in Britain with an ‘X’ certificate is beyond me – I can only assume it was either self-imposed in an attempt to corner the horror market, or that the BBFC took umbrage with the generally mind-bending tone of proceedings, the comedic suicide montage, or the shocking portrayal middle-class miscreants on two stroke motorbikes knocking workmen off ladders and upsetting trays of buns as they blaze a trail of righteous destruction through the new-build shopping precincts of the home counties.

Attempts at evoking a ‘gothic horror’ atmosphere, or indeed the atmosphere of a biker film, are sporadic at best, but the aesthetic identity that takes their place – that of an otherworldly, almost naive early ‘70s Englishness, is so potent that it practically glows, with an otherworld palette of pale greens and browns. ‘Psychomania’ is, quite simply, one of the most wonderfully strange films I’ve ever seen, and furthermore, one whose cultural concerns mesh with my own so perfectly, it was always going to be love at first sight.

When I saw the opening titles, in which the skull-helmeted Living Dead motorcycle gang ride in slow motion about a green-lit, fog shrouded stone circle as John Cameron’s incredible psyche-fuzz theme plays, I knew this was gonna be good.

When said bikers were revealed to be an unlikely alliance of weedy, plum-voiced English youth with names like Gash, Hinky, Hatchet and Bertram (Bertram?!?) sewn onto the back of their jackets, headed by human dynamo Nicky Henson, doing his best impression of Malcolm McDowell in “If..” in the role of aristocratic gang leader Tom Latham, I knew this was gonna be BRILLIANT.

When Tom winds down by taking his sweetly innocent girlfriend Abby toad-hunting in the local the cemetery and tells her “it’s not me that scares you baby, it’s the world”, before he returns to his gothic/modernist family home and waltzes around the hideously decorated living room with his psychic mother (Beryl Reid!), telling her “you know why the fuzz called, mother? We blew a fellow’s mind tonight; it was beautiful – he went straight through the windscreen”, my jaw had just about hit the floor.

By the time Tom had cornered the family retainer Shadwell (George Sanders) and demanded to know, “..why did my father die in that locked room? Why do you never get any older, Shadwell? And what is the secret of the living dead?” (the last question masterfully delivered just as he takes a bite out of a gigantic sandwich), I was fully converted.

And by the time Tom had entered aforementioned locked room for an astounding psychedelic trip sequence featuring shrieking feedback, menacing toad-god visitations and flashbacks of his parents selling their baby son’s soul to the devil…. well let’s just say I was busy cancelling upcoming appointments in my diary and preparing to dedicate the rest of my natural life to the intensive study and appreciation of this thing known as ‘Psychomania’.

Subsequently, ‘Psychomania’ continues much as it has begun - with a parade of demented highlights that almost never lets up. I could spend thousands of words listing them up for you, but probably best if you just watch the movie. Practically every scene is seared onto my brain indelibly, making me grin and cackle as I walk down the street, over five years and over a dozen viewings later. Still though, I guess there might be those of you reading who are unfamiliar with the film, so… it’s just something that’s got to be done I suppose (deep breath):

After his locked room freakout, Tom commits suicide by driving full speed off a motorway bridge. The grieving gang hold a burial for him amid the standing stones, interring him upright on his bike! Gang member Chopped Meat sits at the graveside with a guitar, and lip-syncs to the timeless ballad ‘Riding Free’ (“he really got it on / he rode that sweet machine just like a bomb..”). Later that day, a man who looks a bit like Mr. Bean takes a shortcut through the standing stones when his car breaks down, and is startled to hear the sound a revving engine emanating from beneath him. He tries to run, but is cruelly mown down by a resurrected Tom, as he explodes out of the earth like a weird biker movie phoenix! After enjoying some “carnage at the pub” (as one of the track titles on the Trunk Records soundtrack CD puts it), Tom returns to the gang and informs them that he has indeed discovered “the secret of the living dead”. Apparently, all you need to do to achieve immortality and superhuman strength is to kill yourself, whilst believing that you will come back. Simple as that! Quoth Living Dead second in command and red leather-clad femme fatale Jane Pettibone; “oh man, what are we waiting for..?”

Cue cinema’s greatest ever comedic suicide montage, some extremely perturbed Morris Minor-driving policemen, and a rampage of bloodless undead biker anarchy that leaves the whole of Walton-on-Thames cowering in terror!

Deepening the glorious mystery that is ‘Psychomania’ are the rather vague circumstances by which the film came into being. Reading the plot synopsis above, you might reasonably expect it to be the work of one maniac auteur, but no, ‘Psychomania’ seems to be a film that forced its way into existence simply through… I dunno, osmosis or something – an accidental masterpiece that no one seems to want to raise their hand and take credit for;

Independent producer Andrew Donally allegedly picked it for production simply because it was the only one of a pile of potential projects that his financiers jumped at. Don Sharp was hired as director simply because he was seen as steady hand with a knack for filming good action scenes. Sharp is still alive, but to my knowledge he has never seen fit to comment on the film (if anyone knows otherwise, please let me know). And, despite their enthusiastic performances, most of the surviving cast now seem either baffled or deeply embarrassed by the film’s cult following.

If authorship of the film can be placed anywhere, it is probably with blacklisted American screenwriters Arnaud d'Usseau and Julian Halevy, who made a brief but highly successful comeback in the realm of early ‘70s Euro-horror, penning both ‘Psychomania’ and the similarly inventive/joyous ‘Horror Express’. Clearly those guys had some pretty singular mojo going on, making me wish Hammer or somebody could have put them on the payroll, but even so – chances are d’Usseau and Halevy didn’t consider themselves to be going much more than cramming together currently sale-able plot elements, hoping to make a quick buck.

Trying to determine quite where the incredibly strange totality of ‘Psychomania’ came from is likely to remain a thankless task. Probably best just see it instead as a confounding, life-affirming oddity that arose fully formed from the freaked out mire of its particular post-‘60s, pre-‘70s cultural moment – the perfect cult film, revved up and ready to go. It’s not ‘Psychomania’ that scares you, baby - it’s the world.

Lovely stuff! A film I really can't see too often... it also notable as George 'Shere Khan' Sanders' last film before he committed suicide, leaving a note that read "Dear World, I am leaving because I am bored. I feel I have lived long enough. I am leaving you with your worries in this sweet cesspool. Good luck."

I blame the wallpaper he had to appear alongside in most of his scenes in 'Psychomania'.

Yes! Sanders suicide is the stuff of legend, although I didn't mention it so as not to inject a sour note into proceedings. He certainly looks pretty bored in "Psychomania", that's for sure.

And yes, if the new remastered DVD of the film highlights anything, it's how astoundingly awful the interior decor in that house is.

Micheal Weldon ends his review in the Psychotronic Film Guide by saying "George Sanders committed suicide shortly after finishing work on this film. He did not return on a motorcycle." - a pretty dark gag, but it gets repeated all over the place, including on the back on the aforementioned DVD.

I love this film. It just smacks kitch klassic!!
Wunderbar!

The first time I saw this film I was about 12, and it so absorbed me that I got out a pen and paper and began transcribing what was happening on the screen. A bit weird, but then again so is the film. It has the thrifty look of a Carry On film, and as you say, is peculiarly wholesome. And the soundtrack is credited to the band 'Frog'. Ace.