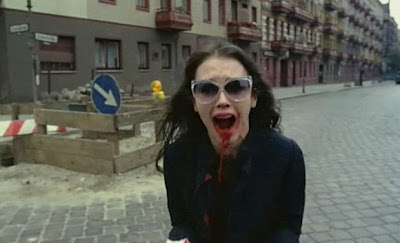 “There is nothing to fear except God, whatever that means to you.”

There is nothing I can say that could prepare you for Zulawski’s “Possession”. It is to a conventional horror movie what straight scotch is to Bud Lite. The other twenty four films on this list, even in their more disturbing moments, are films I enjoy, films I would watch for comfort and good times. But nobody fucking enjoys an Andrzej Zulawski movie. Even at their most (ha) accessible, this man’s films seek to drag their viewers into a black pit of howling insanity and vicious, hysterical chaos. Characters in a Zulawski film tend to begin proceedings on the verge of complete mental and physical collapse, and quickly go downhill from there, as he coaxes performances from his cast that aren’t so much ‘over the top’ as ‘rampaging through the enemy lines in a fucking gold-plated digger’, if you will.

So when ‘Possession’ finds him presenting the world with a Lovecraft-via-Bataille tale of apocalyptic terror set in Cold War East Berlin…. well I hope you’ve got tranquilizers close at hand and have locked away the sharp objects. God knows, you’ll be wishing the people on the screen had soon enough.

I remember the first time I saw ‘Possession’ a few years back, as part of Leicester’s much missed Far-Out Films festival. I left the screening dazed, not quite believing what I’d just seen, and wandered the streets for hours, eventually realising I should probably go home after I nearly walked in front of a bus. I’m not the kind of person who normally does stuff like that after watching a film, but this was something else.

It’s difficult to write much about “Possession”s plotline without ruining the surprises that await the first time viewer, but let’s just say that one of the things that makes it so effective is that for the first hour or so, there is nothing to clue you in to the fact you are watching a horror film. Instead, it seems like a film that’s just plain horrific – Zulawski showing us Sam Neill and Isabelle Adjani’s volatile relationship going south in the most traumatic manner imaginable, with both partners collapsing into a state of violent, neurotic hysteria as their young child looks on and the audience yells PLEASE, WILL SOMEONE CALL SOCIAL SERVICES, FOR CHRISSAKE?

And so, in the second hour, when we first start to catch on to the fact that supernatural elements may be involved in this story, the effect is not much the relief that might come from finding oneself back in the realm of a comfortable, familiar genre film, but more a sense of genuine, pit-of-yr-stomach sickening dread. Kind of like: jesus fucking christ, things were bad enough already, this is the last thing we needed…

Several times in this Top 25 rundown, I’ve discussed the notion of the ‘beyond-the-ken-of-mortal-man’ cosmic horror communicated by H.P. Lovecraft’s best stories being inherently ‘unfilmable’, and indeed, however varied and enjoyable the majority of the films based on the man’s work have been, there has yet to be one that really proves otherwise. ‘Possession’ though, despite rising from a time and place and artistic background completely removed from Lovecraft’s influence, is the only film I’ve seen that not only grasps HPL’s pinnacle of unnameable dread with both hands, but actually surpasses it, amping it up to meet the violence, instability and excess of late 20th century culture and throwing the results straight in our faces, leaving a film that feels like some beserk art/exploitation movie Necronomicon - not an unraped mind left in the house.

And he could have left things there. He could have brought this thing in at, say, 100 minutes, and still left us feeling like we’d been through hell. But Zulawski being Zulawski, he just has NO IDEA when to quit. Machine guns are fired, cars crash and terrifying global conspiracies are implied. The freezing, mazelike derelict apartments of Berlin loom and twist and burn. There is weird, oozing viscera, all over the place. There is an electric carving knife. The closest thing the movie has to a ‘hero’ beats a man’s head against a brick wall and drowns him in a filthy toilet bowl. People scream and stare and contort, and change. A five year old child runs upstairs and drowns himself in the bath in sheer terror. Bombers fly ominously overhead.

For anyone who believes the sole purpose of horror is to horrify and unsettle the viewer to the greatest possible extent, “Possession” is perhaps the most successful horror film ever made.

Here’s how they tried to sell it to people;

I'm really enjoying your countdown of horror films Ben, some fascinating inclusions. This is unique as being the only art film banned as a Video Nasty in the UK. I think it is more interesting as a political allegory. It shows how cold war paranoia and communism can fragment a relationship and the human psyche. I think the word I'd use to describe this film is distinctive!

Thanks Shaun - much appreciated!

And yes, I think every Zulawski film I've seen thus far has been pretty heavily concerned with fractured national identities and traumas caused by the East/West conflict in post-war Europe.

It seems that that's the BIG theme for him, and in "Possession" in functions as both a sub-text and part of the film's surface text too - obviously the narrative is pretty confused by all the chaos and madness in the final quarter, but the implication seems to be that Neill's former employers in the secret service are replacing people with some terrible kind of inhuman creatures, literally as well as allegorically.

I haven't seen any other Zulawski films, but love Possession and recommend it to all my friends.
It's deeply psychological in nature, so much more disturbing and horrific than a simple, literal or visceral horror movie.
The closest, more contemporary film I can think of is perhaps Von Trier's Antichrist.

Thanks for the lovely reviews! You've made my Netflix cue (or at least the 'save' list) much longer!

Hey, thanks - much appreciated!

I'm always recommending "Possession" to my friends too, then scaring them off by saying "..actually though, let's not watch that one right now, it's pretty fucking disturbing - I'll lend it to you sometime".

I've only managed to see a handful of Zulawski's other films myself thus far - I can highly recommend his "The Third Part of the Night", which is pretty easy to pick up as a Region 2 DVD. It has a very similar tone to "Possession" actually, only set in Poland during the war, and minus the supernatural elements. Very good indeed.

His "The Devil" on the other hand is just about the most grueling, mystifying, depressing three hours I've ever spent looking at a screen, so, er - only recommended if you like that sort of thing.