Psyched Out Sci-fi:
Doorways in the Sand
by Roger Zelazny
(Star Books, 1978) 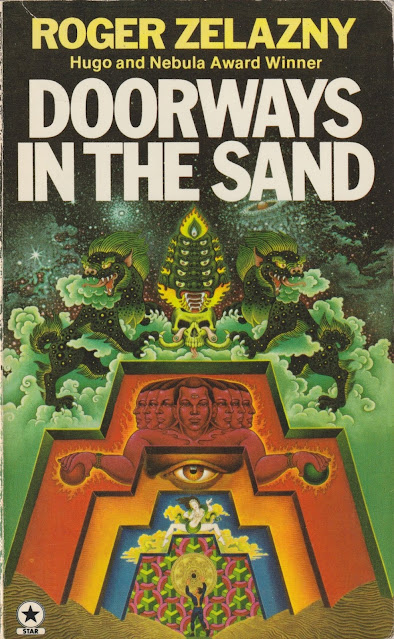 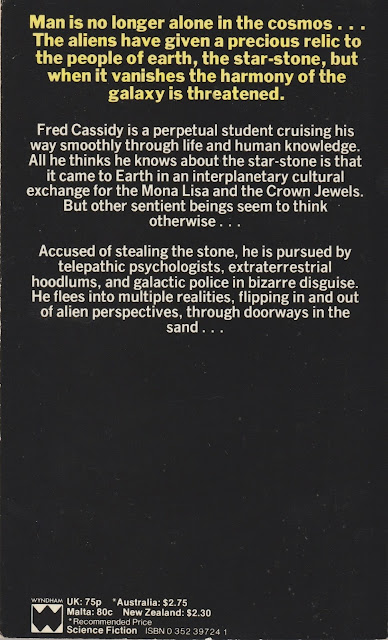 A quintessentially mind-blowing exemplar of ‘70s psychedelic SF artwork, the cover for this Star books edition of Roger Zelazny’s 1976 novel ‘Doorways in the Sand’ appears to combine imagery drawn from Indian and Chinese Buddhism, culturally non-specific monumental architecture and a bunch of stuff that looks as if it might have been found tattooed on the arm of a Hell’s Angel. The more I look at it, the more my head hurts, which is usually a good sign when it comes to this sort of thing.

I can’t for the life of me find an artist credit for this one online, but the style does look at least vaguely familiar, so if you’re able to put a name to it, comments are open below. [UPDATE: the artist has now been identified as the great Bob Haberfield - see comments.]

My research however did inform me that, a) this artwork originally appeared on the W.H. Allen & Co first edition UK hardback of the preceding year, and b) my imperfectly preserved paperback is at least mildly collectible, if online prices are to be believed - so that’s nice. (It will certainly sit nicely on the shelf next to my prized Panther edition of Zelazny’s uber-classic Lord of Light, anyway.)

I wish I could report that the novel itself is as mind-blowing as its wrapping, but…. well… let’s just say that anyone drawn in by this artwork in fact is liable to be somewhat disappointed when ‘Doorways in the Sand’ kicks off not as an intergalactic, spiritual trip, but as a kind of gentle, collegiate farce.

A determinedly perpetual student, protagonist Fred Cassidy has exploited a clause in his late uncle’s will which promised to provide for his upkeep until the point of graduation, allowing him to spend over fifteen years enrolled at an unnamed American college (presumably modelled upon Zelazny’s alma mater Columbia), switching his programme of study with sufficient regularity to ensure he never obtains enough credits in a particular discipline to allow him to graduate.

In a further act of brazen eccentricity, Cassidy has also managed to obtain a medical exemption from the College, allowing him to freely indulge his compulsion for scaling tall buildings, Spiderman-style, without fear of censure. As the novel begins, Cassidy has been assigned a new personal tutor, who - effectively taking on the fist-shaking, “crusty old dean” role - is determined to put an end to his shenanigans by tricking him into finally meeting the criteria for graduation.

Amidst all this, we’re a few chapters into the novel before we realise we’re actually reading a near-future science fiction story, as Cassidy sits atop the steeple of the college chapel, sharing a bottle of highly prized vintage brandy with a similarly unconventional professor, celebrating his impending retirement. As their conversation turns to the implications of the human race’s recent contact with multiple alien civilisations, we are gradually clued in to the fact that the Earth has actually been allowed to begin the process of being accepted as a junior partner in a kind of inter-planetary United Nations-type organisation.

As part of the resulting ‘cultural exchange’ outlined in the back cover blurb above, Earth has been granted temporary custody of two priceless items which will go on to play prominent roles in the novel - firstly, the ‘Rhennius Machine’, a perplexing conveyor belt and tube-based device which functions to “..reverse, turn inside out, and incise objects” (don’t ask), and more significantly, the ‘Star Stone’, an impossibly ancient sculpted sphere discovered on a long dead world, the sole relic of some unknown, extinct civilisation.

As it transpires, a series of mishaps and misunderstandings have led to the Star Stone being employed as a paper-weight in Cassidy’s student pad (he and his roommate believed it to be a rejected replica crafted by a friend of theirs), and, following a wild party on the premises, it appears to have been lost without trace.

Thereafter, much of the novel basically becomes a kind of comic sci-fi riff on ‘The Maltese Falcon’, as various factions - alien and terrestrial, friendly and malevolent - pursue Cassidy, determined to extract from him the information they insist he holds regarding the stone’s whereabouts, using torture, persuasion, bribery, hypnosis and - in one of the novel’s more diverting passages - the brain-scarring “assault therapy” practiced by a sentient potted plant named Dr M’mrm’mlrr.

All of which may sound like a wild old time in the abstract, but, frustratingly, the book really doesn’t add up to much more than a near-200 page wild goose chase. Though Zelasny seems determined to begin each chapter with a descent into deconstructed poetic / dream imagery (which largely just proves an annoyance in this kind of plot-driven narrative), and skims across the surface of assorted philosophical / scientific notions and mythological allusions along the way, the whole exercise ultimately seems rather pointless.

Even if we just accept it as a big lark though, the book’s alleged charms still remain questionable. Though the comic tone and casual surrealism sees the story drifting toward the realm of Kurt Vonnegut or Douglas Adams, Zelasny (on this occasion at least) fails to capture either the heartfelt profundity of the former or the actual funny-ness of the latter, leaving us to wonder once again why this titan in the field of high-minded science fantasy is wasting our time with sophomoric student puns, screwball chases and talking donkeys.

But, never mind. If digging into Zelasny’s back catalogue has taught me anything, it’s that (outside of his more trad heroic fantasy work at least), he always had something different going on - and that’s enough to keep me coming back for more, even if the results sometimes can't even touch the hem of the most distant shadow of his earlier / better-known work.

Bob Haberfield is the artist responsible for the cover art as well as great covers for Michael Moorcock books published by Mayflower.

Thank you Russell! Of course, that makes perfect sense! I've always loved Haberfield's Moorcock covers, so feel embarrassed not to have made the connection here - those Chinese dragons are a dead giveaway. I'll update the post to reflect this knowledge.