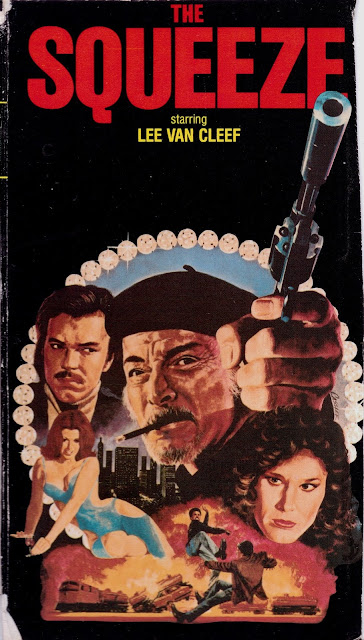 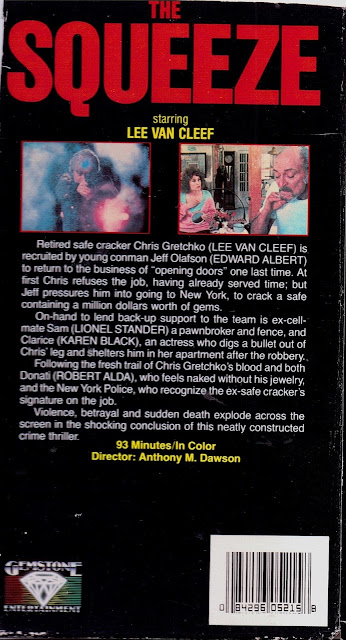 Not to be confused with the excellent, Stacy Keach-starring British crime movie of the same name, THIS Squeeze was shot in New York with a largely American cast by our old friend “Anthony M. Dawson”.

Given how little known it remains amongst the Euro-Cult contingent, I was pretty stoked when I fished this VHS copy out of some mouldering old cardboard box somewhere about five years ago. Apparently I wasn’t sufficiently stoked to find time to actually watch the damn thing however – that’s a pleasure I left until the clock was approaching midnight last Saturday, and…. well it wasn’t a moment too soon, let’s put it that way.

The plot here sees Lee Van Cleef’s retired master safe-cracker lured out of retirement when the needy and weak-willed son of his former boss (Edward Albert) drops into Lee’s Mexican ranch to explain that his life is on the line if he can’t successfully pull off a daring diamond heist for some nasty German mobsters he’s involved with. Out of loyalty to the kid’s dad, Van Cleef reluctantly agrees to help him out, and soon finds himself on the wintry streets of NYC, with only a full length white overcoat and a furry Russian hat to protect him from the thrills and spills that one imagines will inevitably ensue.

Lionel Stander – looking more like Ernest Borgnine than ever – gets a substantial role as Van Cleef’s old time fence/pawnbroker buddy, Karen Black is the – uh – “kooky” next door neighbour who inexplicably turns up to care for a sullen Van Cleef whilst he’s holed up in a rented apartment with a leg wound, and Robert Alda is the cop hot on their trail.

Although the print under review here is an absolutely brutal pan-and-scan job, it's still clear that cinematographer Sergio D'Offizi (an Italian exploitation vet whose credits include ‘Don’t Torture a Duckling’ and ‘Cannibal Holocaust’) extracted some great atmosphere from the snow-covered Brooklyn and Manhattan locations, and composer Paolo Vasile also keeps things ticking over nicely with some cracking ‘70s cop show music.

So far, so good but… oh man. How can I best put this? If you watch this one at all, don’t do so late at night. I took the plunge, and my battle to keep my eyes open until the end proved more epic than anything than unfolds in ‘The Squeeze’.

A director who spent most of his career making competent, impersonal mid-tier genre movies, Margheriti seems to have taken the opportunity to strike out in an uncharacteristically bold direction with ‘The Squeeze’. Unfortunately however, that direction involves ditching the action-packed hi-jinks viewers might reasonably have expected of a film like this, and instead attempting to craft an under-stated, melancholy thriller in the vein of, say, ‘The Conversation’ or ‘The Friends of Eddie Coyle’, perhaps even drawing slightly on ‘Midnight Cowboy’ in its attempt to concentrate on the oddball friendship that develops between the Van Cleef and Albert characters.

The thing is though… (deep sigh)… making a film work on that level requires a few things. Like excellent writing, good direction, and a convincing set of performances. With all due respect to the combined talents of the cast members I’ve listed above, no one working in any of these capacities on ‘The Squeeze’ seems to have felt the need to raise their game much beyond the level you’d expect of a run-of-the-mill late ‘70s Italian crime flick.

Which is to say, ‘The Squeeze’ basically plays out like a run-of-the-mill late ‘70s Italian crime flick in which nothing whatsoever happens. There are no real action scenes as such. No fights, no running around. No sleaze or violence, no crazy shenanigans, not even any amusing dubbed dialogue. The characters are one dimensional, the plotting is predictable and boring. The cast spend most of their time sitting around moodily, muttering dialogue that you feel might have carried some meaning in an alternate universe where it hadn’t been knocked out by a team of writers who were just treading water between the ‘Death Wish’ rip-offs and the ‘Rambo’ rip-offs.

There’s a big explosion after Van Cleef pulls off the diamond heist, but one explosion does not an action movie make. Thereafter, Van Cleef spends most of the remaining run time hiding out with a bad leg, trading sullen banter with Black’s genuinely rather insufferable ‘ditzy single chick’ stereotype.

In one of the film’s weirder touches meanwhile, Albert is arrested for the heinous crime of playing the display drum kit in a shop window without permission (I kid you not) – a caper that apparently lands him with a stretch in maximum security, where he spends much of the rest of the movie playing poker with some Black Panther type dudes.

(Even more unfeasibly, Van Cleef is shown reading about this in the papers the next morning, where we briefly see a headline along the lines of “LOCAL HOOD DRUMS HIMSELF TO JAIL” topping a full page story – it must have been one hell of a slow news day in NYC.)

Whilst all this is going on, the film’s primary antagonist – the nasty, Boris Johnson-lookalike German mobster – has been unceremoniously rubbed out by some thugs working for the guy they stole the diamonds from, and so, with its two protagonists both cooling their heels in confined locations and its main villain out of the picture, the movie proceeds to ramble on toward…. what exactly?

I mean, I’m sure Robert Altman or Sidney Lumet or someone like that could have pulled some compelling drama out of this lackadaisical scenario, but – again, with all due respect to his achievements in the field of broadly decent exploitation flicks - Antonio Margheriti, not so much.

The film’s eventual conclusion is, admittedly, nicely played out, with a bit of a melancholy kick to it, but it’s more of an “I guess I should be feeling something here?” kind of deal than anything else, and the faux-profound closing dialogue between Van Cleef and Stander, like much that has proceeded it, falls flat.

In closing, it’s worth noting that my tape of ‘The Squeeze’ ran about eighty four minutes, whilst the box states ninety three minutes and IMDB gives a run time of ninety nine. Could it be possible that I’ve just subjected myself to some kind of heavily neutered TV version of the film with all the good bits cut out? Or alternatively, is there an uncut version out there somewhere that is even more monumentally tedious? Or, is the ninety nine minute thing on IMDB just a mistake, and the differential in the video run-time just a result of those always mind-boggling PAL / NTSC conversion issues? Answers on a postcard, please.

Until the first of these three possibilities is proven to be the case however, I’m going to let this rather dispiriting review stand – partly just for the purposes of consumer advice, and partly to highlight the superb poster artwork reproduced on the VHS cover. (Aside from the explosion, and Lee Van Cleef holding a gun, absolutely none of the details depicted in this painting are reflected in the film itself, by the way.)

I suppose it’s possible that, at some point in the distant future, you might run across this movie on late night TV and, noting the intriguing cast, the great locations and the cool music, think to yourself, “gee, this looks like a good movie”. Maybe, if you can call to mind the merest fraction of what I’ve written here today, your evening could still be saved. Take heed. 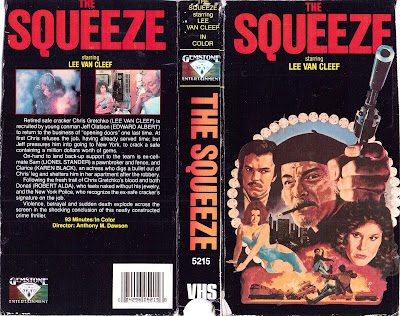 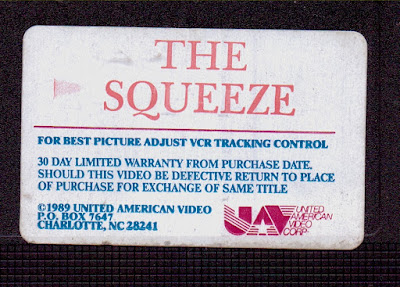 Have to say, that cover scan makes it look like a great paperback “charity shop gold strike” book

Also - the lady residing underneath the gun hand looks disconcertingly like Henry Silva in a wig?

Thanks for your comment Maurice. You're quite right, and... that's an image that will haunt me in the night for a while.

I'm almost certain by the way that this must be a case where the poster artist completed the job on spec without actually watching any footage from the film.

Van Cleef never wears a beret or smokes any cheroots, the guy to his left (presumably the Edward Albert character?) has much longer hair in the film, Henry Silva does not appear in drag, and no ladies in revealing sparkly dresses are featured at any point.

Actually, more to the point, what the hell is going on with her legs?!