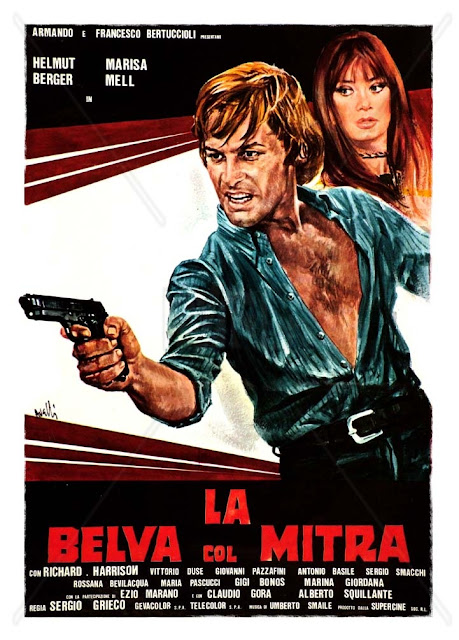 Arriving towards the tail-end of the poliziotteschi’s ‘golden age’ in October 1977, the premise of Sergio Grieco’s ‘La Belva Col Mitra’ (which google tells me this translates literally as ‘The Beast With a Uterus’ – surely some mistake!?) most closely resembles that of Umberto Lenzi’s seminal ‘Almost Human’ (1974), telling as it does the unedifying tale of Nanni Vitali (Helmut Berger), a remorseless, adrenalin-crazed psychopath who has just broken out of prison with the help of his loyal gang of thugs, and  of Inspector Santini (Richard Harrison), the dogged cop who is hot on his trail.

Despite adopting this ‘Dirty Harry’-derived “cop vs psycho” framework however, ‘Mad Dog Killer’ (let’s just call it that and avoid the whole ‘uterus’ business) never really gets the engine running as either a police procedural or an action movie, with Grieco instead spinning the wheel in a different direction entirely. (1)

Clearly this was a pretty rushed, slap-dash production, and Grieco’s direction often feels pretty amateurish. Editing is ragged, continuity between shots is all over the place, and DP Vittorio Bernini’s framing and photography is the very definition of ‘perfunctory’, all of which suggests that this crew had little desire to compete in the high stakes game of ‘70s crime movies.

To highlight one of the movie’s more glaring technical shortcomings - we expect exterior shots during car chase sequences to be undercranked in films like this in order to create the illusion of speed, but how are we supposed to react to a movie that apparently can’t be bothered to re-adjust to the correct speed for interior car shots, thus lending the vehicles’ occupants the twitchy, insane mannerisms of hummingbirds?

Or, to put it another way, can you imagine the sheer amount of non-fuck-giving it takes to shoot footage like this and keep it in the final cut of your commercially released crime movie? Even Jess Franco – who was occasionally known to fake slow-motion by getting his actors to move slowly – must surely salute Grieco’s audacity here.

If questioned on the matter, I’d imagine Grieco’s answer would likely have been that there was no time to re-shoot, and anyway, it looks wild, so gives a fuck? Such is the punk-ass ideology that seems to prevail throughout ‘Mad Dog Killer’, and, once you get into the spirit of things, it’s difficult to deny that it suits the film’s unpalatable subject matter pretty well.

More problematically however, this approach also serves to make a nonsense of what should be one of the movie’s pivotal set-piece scenes, in which Berger’s gang carry out a raid on the factory where Marisa Mell’s character’s father works as a security guard, unaware that Harrison’s cops await them in hiding. It’s the perfect set-up for an absolutely storming, off-the-hook action sequence, but unfortunately things are conceived and staged in such a nonsensical manner that it falls completely flat, with logic, character motivations and physical geography all so woefully skewed that viewers are simply left confused, rather than enthralled.

You’d think a guy who spent most of the ‘50s and ‘60s making pirate and spy movies would be able to keep a better handle on things, but again, Grieco’s spirit whispers in my ear, who gives a fuck? I mean, this clearly wasn’t the kind of thing they were going for here anyway.

What they were going for, in a word, is *nastiness* - pure, nails-down-the-blackboard post-‘Last House On The Left’ grindhouse sadism. And, on that score, ‘Mad Dog Killer’ delivers in spades, subjecting us to a sweaty, gasoline-choked ordeal somewhat in the vein of Mario Bava’s ‘Rabid Dogs’ or Pasquale Festa Campanile’s Hitch Hike (if, admittedly, at rather the other end of the scale of cinematic competence).

As such, the movie’s REAL calling card sequence (or at least, one of two, along with the astonishing finale), occurs right out of the gate, as Berger and his gang kidnap the informer who got him put away in the first place and his wife (Giuliana, played by Marisa Mell), and drive them to an isolated quarry. Once there, Vitali has his men beat the informer to the point of death and bury him alive, pouring corrosive quick-lime over his barely conscious body. After forcing her to bear witness to this, Vitali then proceeds to rape Giuliana in the dust, an act he performs with the casual, emotionally numb brutality of a man carrying out a distasteful, but expected, duty.

Pretty vicious stuff by anyone’s standards, it was likely this scene that was primarily responsible for gaining ‘Mad Dog Killer’ an honourable mention in Section # 3 of the infamous DPP ‘Video Nasties’ list in the UK (making it one of very few crime films to achieve this dubious distinction), and indeed it sets the tone pretty well for the gruelling, mindless violence-packed rampage that comprises the remainder of the movie.

‘Mad Dog Killer’s main asset in pursuing its sundry outrages against taste and decency of course is Helmut Berger himself, who lends a startlingly intense performance to this haggard wreck of a movie. Potted online biographies of Berger would tend to suggest that the actor was at a particularly low ebb at this point following the death of his partner/patron Luchino Visconti in 1976, and it seems reasonable to assume that he channelled at least some of his grief and frustration into what was, at the time, a relatively rare foray into commercial/genre cinema on a CV dominated by more high-minded arthouse fare.

Berger was, of course, a fairly unsettling presence even at the best of times (Visconti famously stated that he was attracted to him as his perfect image of a “demonic, insane and sexually perverted man”), and he seems to have taken the opportunity with this role to take the more sinister aspects of his screen persona to fairly ludicrous extremes, oozing psychopathic menace with the kind of slavering glee rarely seen since the days of Todd Slaughter.

I’m sure there must be tales to tell about Berger’s conduct and state of mind whilst making this film, but I don’t know any of them, so I’ll limit myself to simply observing that he looks as if he’s having the time of his life whenever he is called upon to commit acts of torture, casual brutality and sexual assault, conveying a sense of misanthropic, death-trip fatalism that feels disturbingly authentic, even as he mugs and stares and chews up the scenery like a pro.

Meanwhile, you’d be hard-pressed to find a greater contrast to this approach to acting than that provided by Berger’s opposite number here, Richard Harrison. Appearing a few years after his second wind as a spaghetti western regular had come to an end, and a few years before he accepted Godfrey Ho’s fateful call on the Garfield phone for ‘Ninja Terminator’ and it’s endless cut’n’paste sequels, Harrison must be the least confidence-inspiring avenging cop in poliziotteschi history. Sweaty, red-faced, with thinning hair plastered across his forehead, Inspector Santini looks like a shaky ex-alcoholic trying very hard to stay on the wagon, who really doesn’t need this shit in his life.

Convention dictates that Harrison must triumph in the end, but, pitched against the hulk-like hyperactivity of Berger, we certainly don’t fancy his chances, and, given this movie’s taste for cynical, gratuitous mayhem, the sundry innocents whose fate lies in Santini’s hands should consider themselves pretty much fucked, whether figuratively or otherwise.

Which brings us, I suppose, to poor old Marisa Mell. Where did it all go wrong? Her fans may disagree, but it’s always seemed to me that, after her defining role as a paragon of voluptuous ‘60s loveliness in ‘Danger! Diabolik’ (1968), it was a steep downhill curve all the way for Ms Mell. As you might well imagine, she is subjected to a hell of a rough time in this one, and, if she puts in good performance, that could just be due to the fact that her key note of brutalised, pouting resentment accurately reflects her off-screen attitude toward having to appear in this movie in the first place, as much as it does the travails of her character.

Ultimately, for all its technical drawbacks and unhinged, exploitative cruelty, it’s difficult not to admire a movie like ‘Mad Dog Killer’ on some level. Mirroring the attitude of its anti-hero/antagonist, it is a film that gets by on pure, mad-cap energy, thundering across your screen with zero concern for either quality control or human empathy – a ‘mad, bad and dangerous to know’ movie that will likely draw you into its own airless realm of spittle-flecked intensity whether you like it or not.

The final showdown, in which Harrison inevitably goes mano-a-mano with Berger against the backdrop of an abandoned warehouse, is genuinely impressive stuff, viciously ratcheting up the tension as Berger agonisingly takes a knife to the torso of his teenage hostage (Santini’s estranged daughter) and lustily paws the young male punk who has ill-advisedly teamed up with him, precipitating a beyond-macho, might-is-right finale that effectively delivers on the only possible way a desperate story like this can end.

Essential viewing for all Helmut Berger fans (though Richard Harrison or Marissa Mell fans might want to think twice), ‘Mad Dog Killer’ ranks as one of grittiest exploitation head-kicks that Italian cinema has to offer. If you find yourself in the right mood to take the kind of punishment it’s doling out, it’s well worth a look, for Berger’s extraordinary performance if nothing else.

---
(1)To clarify this title business - it actually takes but a few seconds of googling to confirm that this movie has frequently been released in English as ‘Beast with a Gun’, which presumably reflects the true meaning of the Italian title, but I’ve kept the ‘uterus’ stuff in the main text because it’s funny, and kind of interesting. Please consult your nearest Italian speaker for more info on the no doubt fascinating derivation and usage of the word “mitra”. Other English AKAs for this movie by the way include: ‘Street Killers’, ‘Mad Dog’, ‘The Human Beast’, ‘Ferocious’ and – apparently - ‘Wild Beasts with Machine Guns’.

Berger once said that he only had sex with two women at the same time...

Great write up, even if this sounds too grimy for my tastes. As a more recent convert to the cult of Mell, I was blown away by her work in Fulci's "One on Top of the Other"/"Perversion Story".

I actually remember very little about 'Perversion Story' - definitely one I need to watch again.

As mentioned, Mell's presence in 'Diabolik' will echo through the ages as some kind of ultimate expression of voluptuous '60s glamour, but, sad though it is to admit it, I've always got the impression that she was one of those actresses who went downhill pretty quickly, both in terms of her physical appearance and the kind of roles she was offered, leading eventually to scuzzy exploitation movies like this one.

Many would disagree with this assessment however, and who am I to argue..?
http://marisa-mell.blogspot.co.uk/